Steven Wright Had A Worse Day Than Me 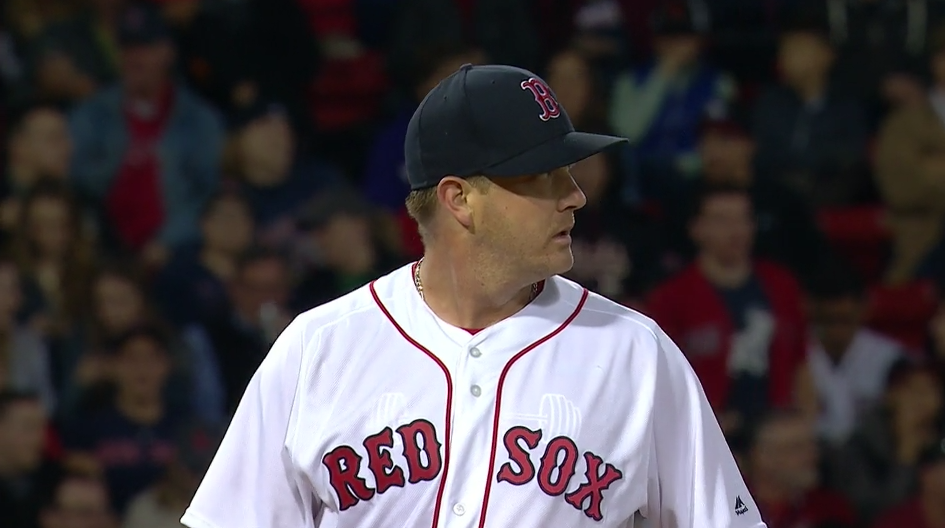 On Wednesday morning, I spent 3 hours dismantling a photocopier to find the source of a paper jam. After consulting the manual and several useless Youtube videos, it turned out to be a phantom jam. Until an hour later, when there were six legitimate jams.

On Wednesday night, Steven Wright was dismantled by the Orioles in the first inning, as his knuckleball refused to knuckle, sailing straight down the strike zone, off an Oriole bat, and out of the park.

On Wednesday afternoon, I fought round two against the printer. It needed new toner. Remove old canister, insert new canister and push until it’s locked in. Easy fix. Except the copier refused to recognize the new cannister. As the built-in instruction manual flashed in my face, taunting me with the exact process I had completed twelve times, I contemplated taking a bat to the entire machine and reverting back to the printing press, or perhaps the medieval technique of frottage. It did not, in the end, require toner.

On Wednesday night, Adam Jones took a bat to a 72 mph Steven Wright “curve”ball, belting it over the Monster to make it 7-0 Orioles. Chris Davis followed it up with a solo shot to right. Steven Wright’s night, the part that wasn’t going to be replaying in his head, was over.

On Wednesday night, in dire need of comfort, I brewed myself a cup of citrus herbal tea and artfully balanced two shortbread biscuits across the rim as I made my way to the living room to lose myself in the dulcet tones of Jerry Remy. About two paces from the sofa, I tripped over an upturned corner of the rug, sloshing piping hot tea all over my hands and feet.

On Wednesday night, Steven Wright gave up 8 runs in 1.1 innings, making it easily the worst start of his major-league career.

On Wednesday, I had a bad day, but Steven Wright’s was far worse. Ordinarily a game in which the Red Sox were down 9-0 by the 3rd inning would ruin my mood. But as I sat on the couch in my tea-soaked socks (because, honestly, there was no point in changing them), I realized that as bad as my day was, at least I didn’t end it with a 52.00 ERA.

On Thursday morning, as I shuffled into the office, terrified of spotting the devilish red error light on that godforsaken copier, I thought of Steven Wright’s terrible night. If he could make it through, and remain somewhat positive, I could make it through any moderately frustrating day.

The Assassination Of Brennan Boesch By The Coward Joe Maddon

Outfielder Brennan Boesch, 31, has retired. He was 3rd-round pick from Harvard-Westlake HS in '06, played for Tigers, Yankees, Angels, Reds.

His story ended after a 2016 locked within the Red Sox organization — a season so rough it made Pablo Sandoval blush.

Of all the rookie half-seasons that made us pine for wonderful outcomes bigger than ourselves, Boesch’s first half in 2010 definitely struck us from an unexpected angle, as do most wonderful baseball things. A hot start in Triple-A was parlayed into a call-up to bat fifth behind Miguel Cabrera, because why not, it’s not like you were hitting with any power. The ball made a different sound off his bat, Jim Leyland always said, which made sense because Brennan Boesch’s bat was made of mythril ore. He was a big tall kid from Santa Monica that ran like a deer and fielded like one too.

His .990 OPS ranked sixth in the first half behind Cabrera, Justin Morneau, Josh Hamilton, Joey Votto, and Albert Pujols. Tigers fans, and most definitely not this one, began thinking he could be traded straight up for Cliff Lee. But in reality he was a free-swinging unrated prospect, had a fabulous three months, then just became a swinger for free. Because his second half was, to put it mildly, an elephant dump.

There’s not always a moment when a Francoeur or Agbayani just turns stale — you enjoy it while you can before it’s gone. But for Boesch, there was a bit of a slump followed by three ultimate tests laid forth by that cerebral chieftain, Joe Maddon, in a series against the Rays:

Pure brass ones. A rookie who caught the league, if not his own fanbase, on fire for three months, and weeks later Maddon was taunting him with amazing run-knockin’-in opportunities, showing everyone that your savior was actually just a Triple-A outfielder who by a stroke of luck saved the correct leprechaun’s life.

Less than three years later Boesch was released to make room for some fused together trilobites that very much resembled Torii Hunter. Boesch would then get 226 more plate appearances with three others teams, and his accomplishments therein are easily summarized by this sentence. The 2015 Reds, who themselves could perhaps be considered the 2015 Brennan Boesch of baseball teams, also started him in center field seven times. He became just another player with a career negative WARP. That’s when you know it’s time to walk into that sunset.

My baseball fandom started very young, aware enough to understand the game, yet unconcerned enough with the gap between reality and unreality to bother bridging it. That’s how the myths of one’s baseball youth survive. It could look like the Baby Boomers’ collective fetishization of baseball in black and white, but it can also be more personal. For me, it was all about the greatness and grandeur of one Luis Medina. 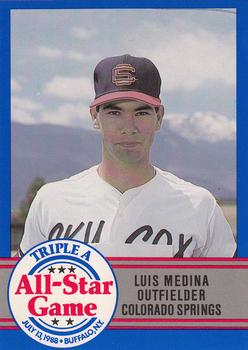 My personal unreality was that Medina was the greatest baseball player ever. The closest ballpark to me was Sky Sox Stadium in Colorado Springs, then the Indians’ Triple-A affiliate. I remember getting excited to see Medina come to the plate, and I remember him hitting a home run right after that. As far as I can recall, he did the same thing every time I saw him bat—nothing but homers. He was invincible. When he didn’t homer, it was because he was up with the Indians. I imagined him similarly terrorizing major-league pitching while also anticipating his return, unaware that Medina probably hoped never to wear a Sky Sox uniform again.

According to reality, Medina was not, in fact, the greatest baseball player ever. But he did have some power. Medina led all minor leaguers in home runs in 1988, which is probably the year I fell for him, with 28. In that same year, he hit six home runs in September for Cleveland. It was enough for him to earn a look in the following year’s spring training, which was then followed by him earning his chance with the big club. The result was hardly a tale of legend.

Growing up into consciousness means growing out of the naiveté that one’s baseball reality at age six was both true and universal. Baseball Reference, revealer of unwanted details, has finished the job. But I wasn’t totally wrong. Medina did earn a spot in the Sky Sox Hall of Fame, which can’t be but a good thing, even if that particular club includes even less impressive players like Ryan Hawblitzel and Alan Cockrell. Then again, locked in another’s memories, perhaps Alan Cockrell is still a hero, felling his own enemies forever.