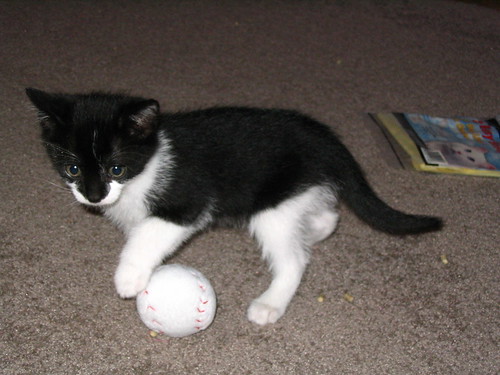 The Marlins will win some and the Marlins will lose some. How many, and how, and why are not for us to know. What can be known is that on Tuesday night, a terrified gray cat ran onto the field at Marlins Park before climbing up to the Dinger Machine and huddling there, panting in fear, for a number of innings. Has any cat ever been freighted with so much meaning?

The Cat sìth is a fairy, or maybe a witch, and it will steal your soul. Marcell Ozuna, who hit two home runs last night to help the Marlins defeat Atlanta, claims he detests cats. To be fair, if you had sold your soul to the Cat sìth for a mere two dingers, you would detest cats too.

David Samson, president of the Marlins and all-around bucket of tepid suds, says that the terrified gray cat that invaded Marlins Park last night would not have been harmed by the team's Dinger Machine because park officials would not have activated it in the event of a dinger. On the other hand …

Miami has played host to Scarface, Moonlight, Miami Vice, Ballers, and Pain & Gain. Never, though, before the strange saga of a small gray cat, scared witless by the general cacophony of a sold-out sporting event yet brave enough to mount a wall and enter the depraved heart of a Dinger Machine, has Miami seen a single drama that perfectly encapsulates everything right, everything wrong, and everything that defies easy judgment about The Magic City.

Like most American males whose sensitivities to other cultures and perspectives caps out around “writing slightly odd articles about major league baseball, a televised sport,” my primary exposure to taoism is limited to the movie Crouching Tiger, Hidden Dragon. When Chow Yun-Fat says “Real sharpness comes without effort,” I have to say, as a high school freshman, it was inspiring to hear.

(Note: My preferred spelling of the word is “daoism,” because at age 29 the concept of spelling things differently than you say them aloud is challenging to me.)

Migrating back to the periphery of a point: taoism. It’s a philosophy defined by themes of naturalness, spontaneity, but for the purposes we will center on here: detachment of desire, “wu wei” (literally non-effort), and a focus on being in the flow of nature. It’s true in other sports, but universally true in baseball, that wanting something too much, showing an abundance of effort and desire is harmful if it comes at the cost of precision. Overthrowing, pressing, overswinging are all cancerous behaviors.

But for my money (I’m not sure where taoism stands on gambling or gambling references), nowhere is taoism more present than in the losing locker room of a walk-off loss. It’s here where we find baseball’s most highly-trained warriors, fresh off a tightly-played game, faced with the fruitlessness of their efforts, and forced to accept that this is the way, and that it must be embraced for its own rightness.

Here is a beginning of the understanding. Jansen sees the best of himself rendered worthless, and realizes its purpose and rightness is unaffected. He is on the brink of enlightenment, standing at its lip, prone and ready to be pushed in by the way.

“In the end, things happen. It's baseball, nothing else we can do now,” said Tommy Kahnle after allowing a walk-off single to Michael Brantley on Tuesday. This is masterful, as Kahnle sums up baseball acutely, a series of events which at their end, slyly reveal itself to be above our influence and efforts the entire time, and we are improved for having this knowledged shared with us.

“Everything is magnified. You’re the best team in the world or you're the worst team in the world. That’s the nature of the beast,” Kyle Seager said after the Mariners April 6 loss on a George Springer home run. This is extreme rhetoric but nevertheless a good truism: heroism and infamy are nothing but stops in the flow of the universe. Their differences are meaningless as we oscillate through both, dictated by forces greater than ourselves.

“That one hurts a little. We take a lot of pride in coming back, making that push late to tie it. That hurts, for sure,” said Corey Seager after the Dodgers’ walk-off loss to the Cubs on Tuesday.

Well, this just shows that Kyle is the better brother, or at least the wiser one.

Why don’t we take these chances? Fear of rejection. Fear of failure. Fear of being exposed as a fraud. It’s safe to maintain the status quo. If we don’t step out in faith, put our hearts on the line, or risk being rebuffed, then we’ll never have to know the pain of heightened expectations gone awry. All the while we always forget…

Maybe you’ll never be the prom king. Maybe you’ll never climb Mt. Everest. Maybe you’ll never find the right amount of time to put popcorn in the microwave without burning it. Let’s say hypothetically you went to Las Vegas in 2012 for one reason and one reason only: the Nascar Cafe. You sat down at a table in the front of the restaraunt designated for gladiators who were about to enter the battlefield. You waited patiently as they sat a two-foot long, 6 lb. burrito in front of me. And then, You took a bite. You chewed and you chewed. Ten minutes in, you felt unstoppable. The patrons who had stopped to watch cheered you on. There was no way that you could fail. You were about to silence every teacher who ever doubted you, shame every coach who ever mocked you, make your parents tell you how proud of you they were.

But the shredded beef was so chewy. The flour tortilla was so filling. Your pace slowed, your intestines quivered with rage, the clock ticked, and you knew your defeat. Sometimes, the good guy doesn’t win in the end. Sometimes there is no happily ever after. But…

So rent that tuxedo with confidence, workout in an elevation mask to simulate being at high altitudes, don’t stop buying that Pop Secret, and yes…order that oversized burrito. Will you succeed? Probably not. Will it be painful? Yes. But it’s always worth taking a chance on yourself because…

Simply beating a video game is sometimes not enough. In today’s culture, games are often treated as digital skeletons to be broken apart further and further. Like hyenas many seek not just to reach the final credits but to crack open games, looking beyond structure or form, searching for marrow. Even as video games gained the ability and the desire to become interactive movies, players have co-opted them for their own purposes, and in the case of speedrunning even fundamentally transformed the purpose of the game. Where once the question was “have you beaten Mega Man” now we ask “Have you found the glitch that lets you hack two minutes off your speed run in Zelda?”

This is a natural process in human experience. Our nature is furiously, unceasingly inquisitive. The basis of the the last century’s explosion in technological and scientific advancement is foundationally built around simply asking “how?”, and “why?", billions upon billions of times. But there is a danger inherent in deconstruction. In a quest for knowledge, skill, and Youtube subscribers, these rogue madcaps risk pulling us too close to the magic trick, leaving us with nothing but extreme close ups of fast moving hands.

If one grants the obvious truth that life is nothing but a AAA video game for the gods, then baseball stand as one of its most enduring mini-games, alongside “navigating a phone menu”, and “where are the ants getting in?” With a history stretching back nearly two centuries, baseball has withstood many attempts to hack its central core: Candy Cummings, Babe Ruth, the DH, the shift, 2004 Barry Bonds, Tal’s Hill. It’s only recently, however, that the energies of baseball’s teams have felt so unified in their efforts to break it. The inefficiencies of bunts and stolen bases have already largely been eliminated, the ceremony of an intentional walk done away with. Soon groundballs will be a thing of the past, an iron lung in an age of modern ventilation.

In video games only the very best, deepest, well-crafted games attract the kind of loyal following (and accompanying mod-developing community) that extends their shelf life beyond the few months between big releases. Baseball is an 8-bit game in an ever more VR-world, but every time it has felt close to obsolescence the players and fans have found a way to save it. Wacky promotions, player-specific cheering sections, artists, musicians, Mike Trout. We find a way to make the game entertaining, often in the ever-decreasing gaps in its efficiencies. We don’t want to break baseball, not really. Sometimes, we just want to play the game.

The great Buck O’Neil liked to say “You can’t kill baseball.” He was wrong, of course. There is a future, be it a hundred or a thousand years from now, where this beautiful game is lost to history. If nothing else it’d be easy to twist it into something unrecognizable. But its code has proven to be one of enduring complexity, one we can break, but have thus far loved too deeply to fully do so.

We keep getting smarter, though. Smarter every day.

You need to be logged in to comment. Login or Subscribe
cmellinger
Wow. All three were excellent today. Thanks.
Reply to cmellinger
BleedingBlue88
The fourth was also good.

Really enjoyed James Fegan's contribution. Excellent.
Reply to BleedingBlue88
BrewersTT
I expect more cat troubles at Marlins Park. The place does smell overwhelmingly of Fish, after all.
Reply to BrewersTT