Let me first say that I don’t know which advertising conglomerate came up with the idea that explains the omnipresent hand-wringing over Michael Pineda, and I wouldn’t thank them if I did—their actual intended result is so breathtakingly insulting to the intelligence of the general public that it cancels out any value of this incidental discovery. Nonetheless, a bit of wisdom is glinting off the surface of the cultural eyesore they brought into our world, so we might as well use it.

Surely, you’ve seen them. The commercials. There is apparently only one way to reinvigorate an automobile manufacturer’s brand, and that is to record a bunch of “normal people”—aka bad actors—acting very surprised that a car that meets the standards of their 30-second inspection could possibly be created by a brand they implicitly thought to be a terrible manufacturer of cars.

You don’t even have to think about it that hard to realize what an odd or desperate strategy this is. Depending on the viewer, the ads say, “We’re not as bad as you think!” or “We used to suck, but we’re better now!”

Whatever message is received, the whole strategy springs from the perceived positive benefits of exceeding expectations—even if that means spending actual money to lower the bar.

I haven’t done the requisite research to tell you whether this is doing the trick for Chevrolet or Buick or whoever. But in the far away—though equally judgmental—world of baseball, the case study of Michael Pineda and Tom Koehler (make your shocked face, bad actors) might just reveal the intelligence of the tactic being employed.

Creativity, it’s sometimes said, springs from the ways people navigate around, over, or through their own limitations. A common limitation binds Pineda and Koehler: Their fastballs are best suited for facilitating home run derbies.

The ways they have chosen to surmount their common challenge, however, diverge wildly.

There are, of course, many reasons Pineda is roundly viewed as a hyper-talented potential star who hasn’t met expectations while Koehler toils as … a pitcher. One is velocity, a thing Pineda has more of than Koehler. Another is hype, which comes partially because of the former thing, but also because of the more nuanced work of talent evaluators and the blunt assessments of our eyes.

Stats are also a part of it. They influence our minds in more binary ways, and for less traceable reasons, than we’d care to admit. My father’s father, at some point in his life, developed a deep distrust of American automobiles, and swore off ever owning one again. I have no further explanation for why I am loathe to get behind the wheel of a car marketed with country music in the background.

I feel quite confident that Pineda didn’t craft his approach around the idea of having a good FIP, but it’s hard to get past just how much of his stature as the game’s most pressing contemporary mystery-wrapped enigma tumbles from the line of events that began when Voros McCracken questioned how much control pitchers exert over batted balls. Koehler, on the other hand, arrived on the contemporary scene with a modus operandi completely unsuited to win any sort of acclaim.

And so when we, statistically inclined baseball fans who have been pursuing greater understanding of the game, look at how Pineda and Koehler approach the simple quandary of a three-ball count, we have a reaction we cannot fully control. Pineda, in 134 applicable 2016 plate appearances, struck out 21 and walked 52, dogged in his pursuit of good counts and a low walk rate. Koehler, in 158 such plate appearances, struck out 23 and walked 75, declining to care about the walks (clearly), in hopes of not being crushed.

You have a reaction already. Remember it.

You may have jumped ahead, logically, to the conclusion that you thought this was moving toward: High expectations are hell. Pineda is what he is, yet he’s doomed to feel the flames of disappointment because of what we thought he was. That may actually be true, depressingly enough. But it’s not the point.

Those commercials, grating as they are, show a cold, calculated acceptance of the circumstances that brought them into existence. They can’t help but be aware of their tackiness, of the mud they are slinging at the 1995 or 2015 versions of their very own brand. And once that’s out in the open, it doesn’t matter. Whatever damage is done to the pristine perception of their reputation can be quickly outweighed by results—any results.

While Pineda’s insistence on pounding the zone is admirable in a vacuum, and capable of delivering intoxicating moments like Monday’s perfect game bid, it is ultimately a predictable model that doesn’t really work. The bottom line doesn’t cut it.

If we’ve learned anything over the past few years, it’s that contact is not a crapshoot.

Koehler doesn’t have nearly as much talent as Pineda, but he has made the ruthless, perhaps painful choice to cut his losses and force hitters to either make (relatively) bad contact or take a single base. He has acknowledged that a walk is sometimes a preferable outcome. 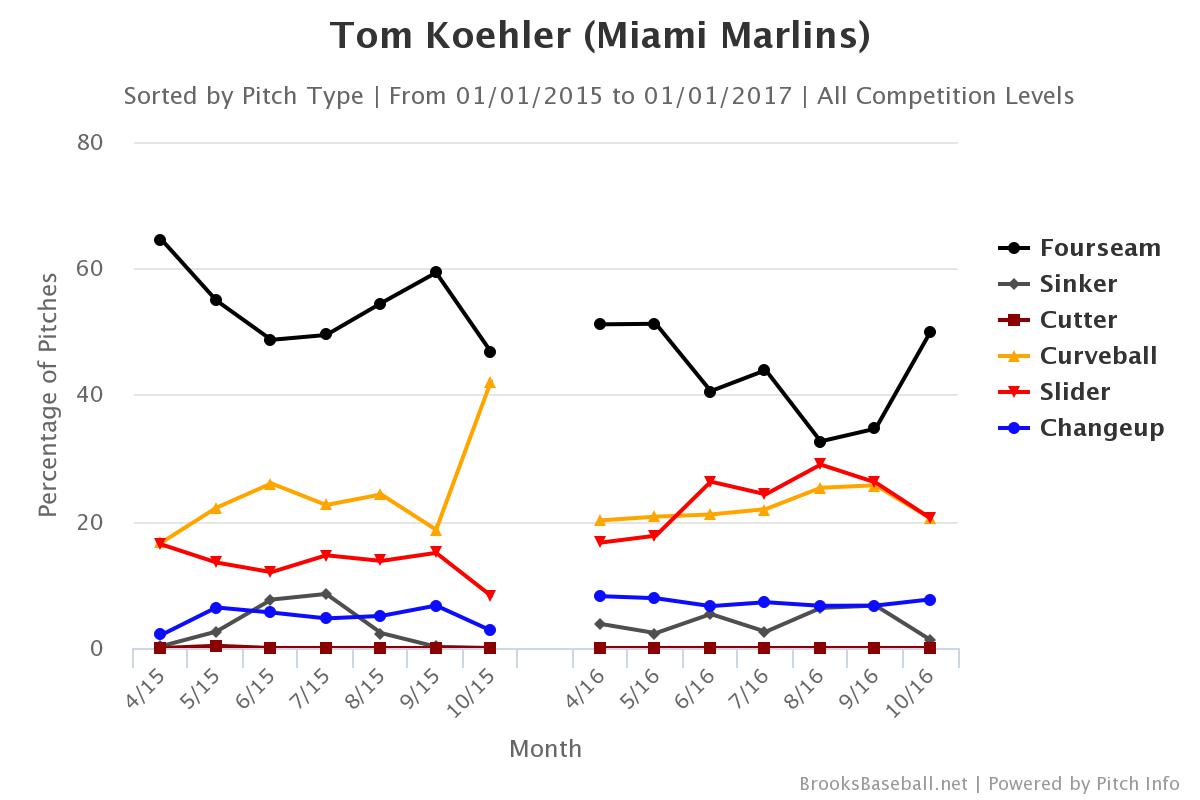 He’s made his slider and curveball more prominent pieces of his repertoire, and even added a few changeups to further push the fastball to the back burner when possible. He still gets into bad counts just about as often as any viable major-league starter, but in 2016 he stuck with his mix, for the most part, and managed to bring his strikeout rate up a tick, and push his home run rate below league average. Exit velocity numbers, by the way, back up the idea that he induced far, far weaker contact in those three-ball counts than Pineda.

Pineda doesn’t get into those bad counts nearly as often! He only has the slider to lean on, really, but it’s still a much better pitch than anything Koehler is breaking out. It’s all a very reasonable sales pitch. And yet …

Yes, yes, Koehler lords over a 10-gallon drum while Pineda tries to keep the ball in a sardine can, but it shouldn’t be this close. Your eyes can only deceive you so much. Eventually you begin to think that the off-brand might be on to something. Results, after all, are the name of this and many other games.

And at a certain point, everything is what it seems.

You need to be logged in to comment. Login or Subscribe
markedits
Those commercials are annoying, big league. The sound of one of the bad actors saying, â€œOh, Cheveeeeee!" appears to be permanently embedded in my brain. It chooses to replay itself several times a day.

I offer for your enjoyment this commercial featuring Seahawks linebacker Bobby Wagner for Beacon Plumbing. Its inescapable message: Beacon workers will repeatedly break the companyâ€™s customer service rules at your house: https://www.youtube.com/watch?v=Auch9FpDGfo