The Cardinals’ season is off to a disastrous start. On Monday night, they got shelled by the Nationals, falling to 2-5. Things are going wrong everywhere, from a generally anemic offense to a bullpen that looks (surprisingly) like one of the NL’s worst. They also haven’t gotten many good innings from their starting pitchers, and on Monday night Adam Wainwright got knocked around by a good Washington offense. He left after facing three batters in the fifth inning, but without retiring any of them and with four Nationals runs already on the board.

If anything, the outing was worse than that brief summary sounds. For most of the night, Wainwright was unable to command his curveball to the third-base side of home plate, and unable to command his cutter to the first-base side. He struggled to create the angles that would allow him to miss bats, especially against the Nationals’ excellent left-handed hitters: Adam Eaton, Bryce Harper, Daniel Murphy, Stephen Drew, and Matt Wieters.

In the bottom of the fourth inning, Wainwright’s back was already against the wall. Despite the good work his offense had done in support of him, the game was tied. This was not entirely Wainwright’s fault. Wieters hit a ball hard for a leadoff single in the fourth, but then Kolten Wong threw away a force attempt on a ground ball by Tanner Roark, opening the door to a big inning. Eaton rapped one of those aforementioned glove-side cutters—a pitch right over the inside corner but neither far enough in nor far enough down—through the right side for a game-tying RBI single. Wainwright executed really well against Anthony Rendon, however, using three straight curveballs to set him up for an elevated fastball and getting a crucial pop-up out.

That brought up Harper, with runners on first and second and one out. At that moment, Wainwright was preparing for his 12th faceoff with a left-handed Washington batter. Of the first 11, eight yielded a ball in play with a Statcast hit probability of at least 47 percent. Every lefty who was seeing him was squaring him up. If he couldn’t change that immediately, the game was about to break open.

Here, in very confusing visual form, is how he avoided that fate: 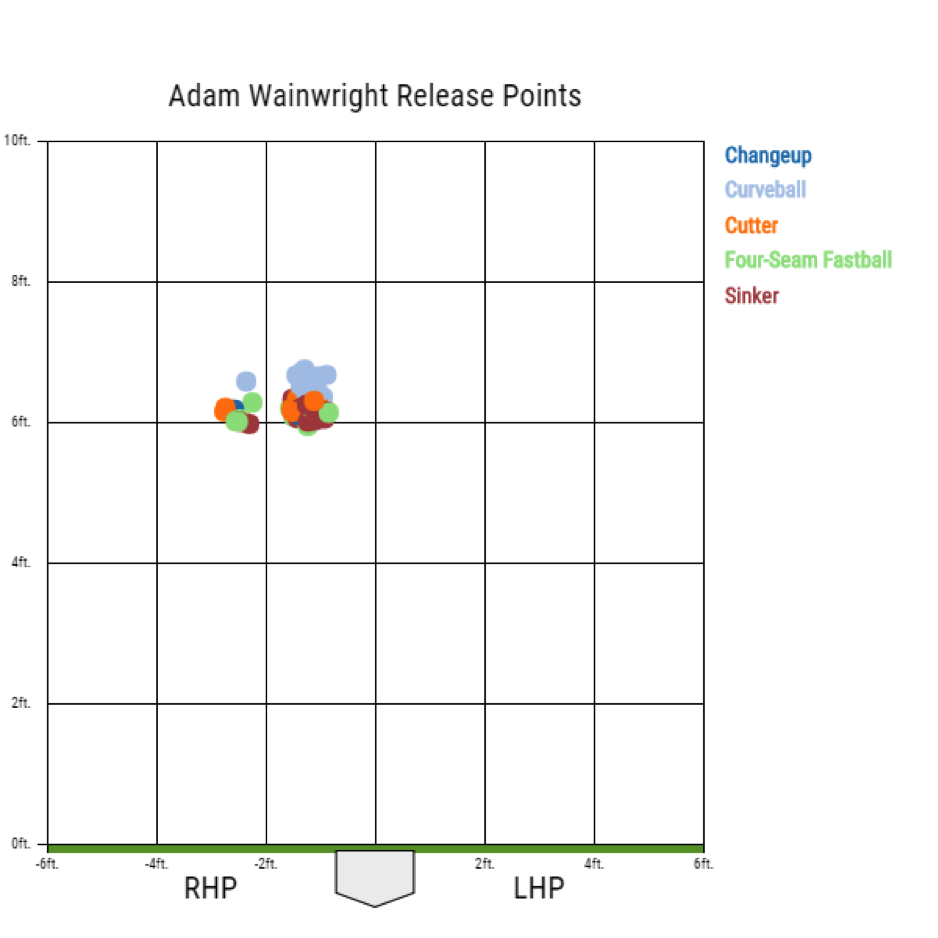 That is a plot of Wainwright’s release points throughout Monday night’s game, from the catcher’s perspective. Notice the two distinct clusters. There’s a large cluster in one general spot, and then a smaller one to the left about a foot. That’s because, when Harper came to bat (and in subsequent battles with Murphy and Drew), Wainwright slid across the rubber, from the first-base side to the third-base side.

I don’t remember ever seeing a pitcher switch sides of the rubber in the middle of a game, and I definitely don’t remember anyone doing it only against left- or right-handed hitters. (When Jayson Werth and Ryan Zimmerman batted, between Murphy and Drew, Wainwright was back on the first-base side.) It seems like a desperate, even crazy thing to do. It didn’t really work, either. Wainwright did keep the ball off the barrel of Harper’s bat. He did successfully throw his cutter for a strike to both sides of the plate against Harper, and after walking him on a four-seamer (aimed for the outside corner in a 3-2 count, but wide, and without much conviction), Wainwright did throw a good 1-0 sinker to Murphy to induce a huge double play. Zimmerman and Werth each hit singles to start the fifth, though, and after Drew drilled a poorly located four-seamer over Stephen Piscotty’s head, Wainwright was gone.

We got a very limited sample of this radical in-game adjustment, and pretty uneven results. The fact that it needed to happen, and that Wainwright (a notoriously stubborn, proud veteran hurler) recognized mid-stream that it needed to happen, can only be viewed as a very bad sign. (He did this in the middle of the fourth inning itself, don’t forget. He’d been in his usual spot earlier in the same frame, against Wieters and then Eaton.) It’s a panic move, and it didn’t even pay substantial dividends.

On the other hand, it did look better. Wainwright didn’t look totally comfortable working that way, and still, he made his best pitches of the night to lefties from that position. The sinker’s run seemed to show itself a little later, and the cutter’s cut didn’t carry it to a non-competitive point inside on Harper. Drew’s long fly was on a fastball with which Wainwright didn’t hit his spot, but even so the double it turned into was almost an out.

It seems like Wainwright might have more margin for error pitching from that side of the rubber, and might better be able to use his cutter from that position. It might also discourage his rejuvenated love affair with his curveball, which he thought he’d fixed over the winter after seeing a younger version of himself explain his hook on a video, but which was soft and had an obvious hump out of the hand on Monday night.

It’s probably too much to expect or hope that Wainwright will slide around on the rubber very often during starts, going forward. It’s equally unlikely that he’ll start consistently pitching from different spots based on the handedness of opposing batters. I reviewed his last several starts, going back into last season, and he did nothing of this sort. Still, it’s a fascinating thing he tried, and it bears watching. Wainwright is a linchpin of the Cardinals’ playoff hopes, and if his stuff is as diminished as it appears to be in the early going, he’s going to need some unique wrinkle like this in order to meet the team’s needs.