Last week, I wrote about team payrolls as a percentage of the league average. I found that the Royals have increased their payroll on a relative basis for six straight years, and the Orioles have done so for five straight. During the past three years, the teams that have grown their payroll the most are the surging Astros and Cubs. The teams that have cut theirs the most are the rebuilding Phillies, Brewers, and Reds. That was all interesting, if not completely unexpected (except maybe about the Royals and O’s).

The article was prompted by baseball analyst Sky Kalkman, who tweeted on April 4:

Someone should write an article about team-level payroll trends, adjusting for total league spending. Note the Royals upward hike.

I let him know that I’d played the role of “someone,” and he replied,

Boom, thanks! Next idea: compare to wins or Pythag wins. Maybe marginal $$/win or a non-linear $$/win model. https://t.co/pzR7perK98

What Kalkman is saying here makes sense. A lot of analyses of payroll efficacy look at whether teams that spend a lot get a lot of wins. Inevitably, there’s a big-spending team that has a poor season and a small-budget team that does well that screws up the relationship. But that’s looking at just the level of spending at a point in time.

Teams that purposely grow their payroll faster than the league average—that’s an investment, right? And you’d expect a return on that investment, in the form of more wins. Similarly, a team that’s trimming payroll might be shedding some high-priced veterans or calling up some young stars making the major-league minimum, but it could be a case of a team selling off expensive assets in a bid to rebuild.

To check this, I made a graph that compares the change in a team’s relative payroll to the change in its wins. For example, the Cubs' payroll rose from 95.9 percent of the major-league average in 2015 to 131.7 percent in 2016, a big jump of 35.8 percent. It paid off, though: Six more wins in the regular season, as well as those 11 more in the postseason.

Here’s the graph I used. 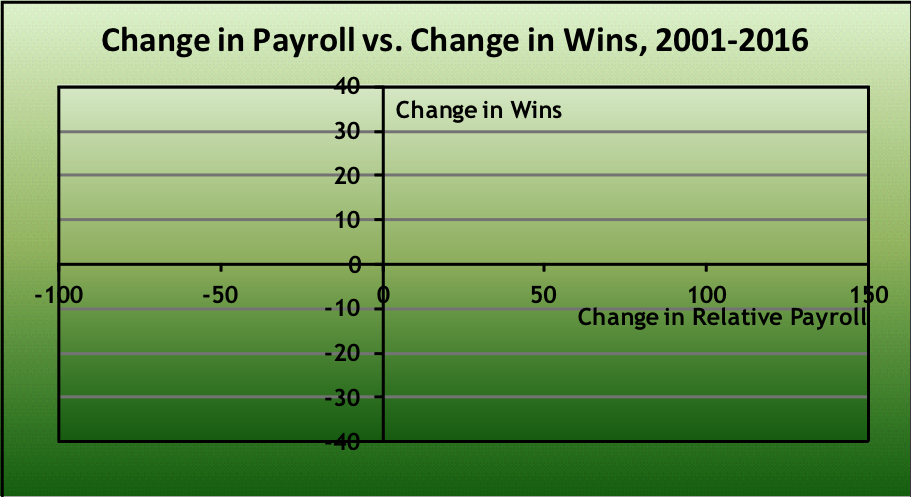 If a positive change in payroll creates a positive change in victories, we should see the data with a general upward slope, from the lower left-hand quadrant to the upper right-hand one: As teams increase their payroll, their performance improves as well. Is that the case? 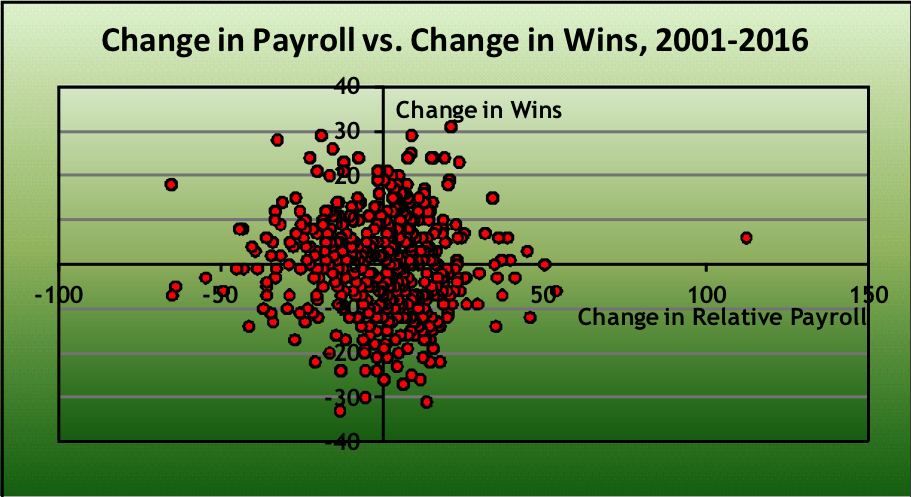 Each of those dots represents a team, starting in 2001, so there are 480 dots. Does that relationship look like it’s sloping upward? Well, not a lot, for sure, but maybe, if you squint … 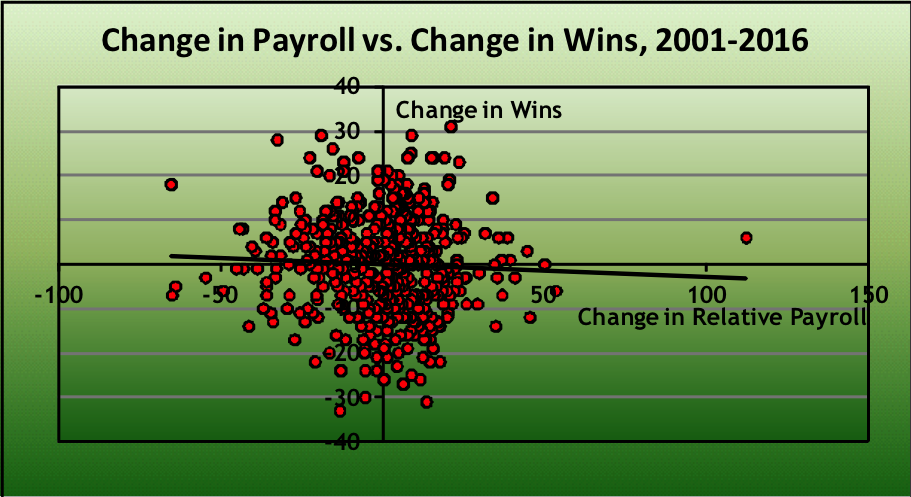 Ah, never mind. That black line is the slope of the regression line that best fits the data. It’s going the wrong way. And what’s more, the correlation coefficient is -0.05. For those of you not familiar with statistics, that means that there’s no real correlation. There isn’t a relationship, during the current century, between changes in relative payroll and changes in wins.

There’s a valid argument that sometimes teams reduce payroll but don’t expect to do worse. Getting rid of a declining but high-priced veteran can help a team both in the books and on the field. But it seems logical that if you invest more, you expect a return.

So I looked at only teams that increase their payroll. That’s all the dots to right of the vertical axis in the graph above. It doesn’t make a difference. The resulting correlation was still negative, and it was -0.01, suggesting no relationship at all.

But let’s look at that graph one more time before we dismiss it. 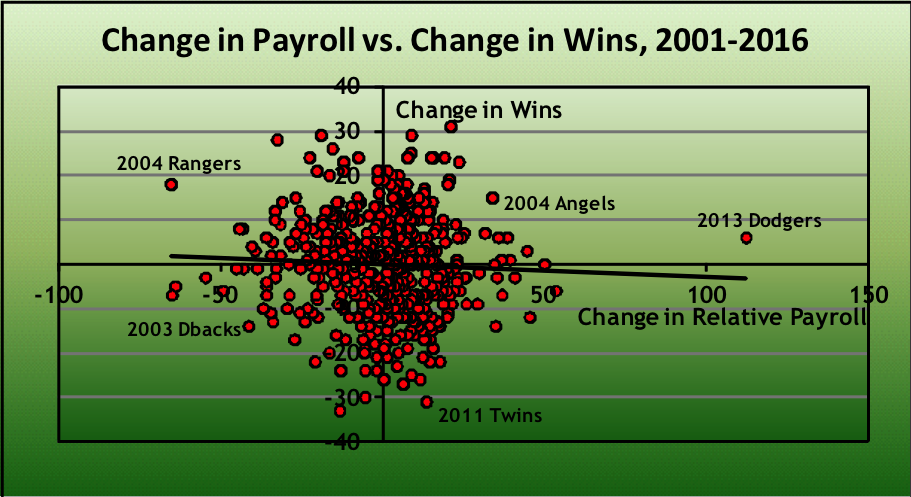 2004 Rangers. They’re sort of the opposite of the 2011 Twins. The club’s payroll in 2003 was $102.5 million, 145.0 percent of average. The next year it was nearly halved, to $55.3 million, 79.6 percent of average, as Carl Everett, Juan Gonzalez, Rafael Palmeiro, Alex Rodriguez, and Ugueth Urbina—combined 2003 salary $57.65 million—all departed. But the team improved by 18 wins, from 71 to 89, in Buck Showalter’s second year at the helm. They’re the only team to have dropped its relative payroll by more than 50 points to improve their record.

2003 Diamondbacks and 2004 Angels. They exemplify how the relationship between spending and performance is supposed to work. In 2003, Arizona’s relative salary level declined from 155.3 the prior year to 113.9, and their performance reflected it, as they dropped from 98 wins to 84. That same year, the Angels finished with 77 wins and a payroll that was 108.9 percent of the league average. In 2004, the payroll rose to 142.8 percent as the team added Bartolo Colon and Vladimir Guerrero. The investment netted them 15 more wins.

Wait, one more chart. I’ve been looking at 2001-2016. Baseball’s gotten more sophisticated since the turn of the century. I mean, Moneyball wasn’t published until 2004, Baseball Between the Numbers until 2007. So maybe I should be looking at a shorter timeframe. Take 2011-2016. That’s six years, 180 team seasons. Has the increased spending = increased wins relationship emerged? 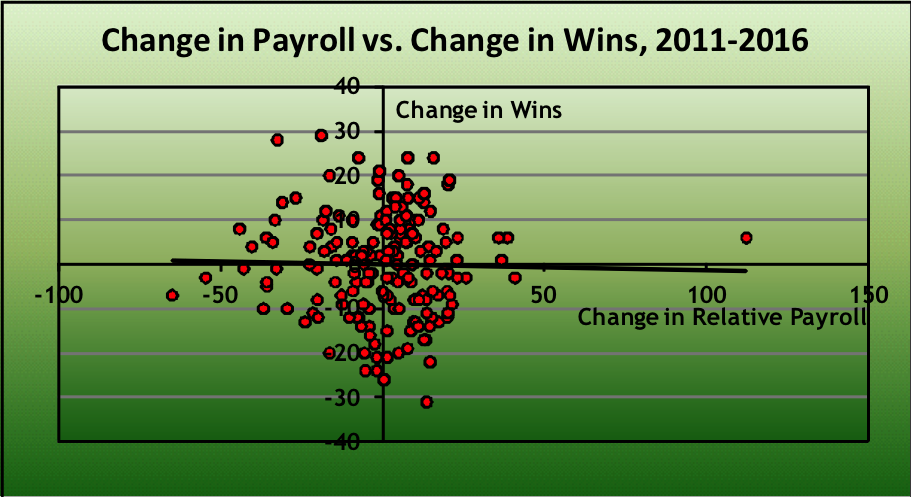 Why not? Well, as always happens when looking at payroll data, there’s a lot of noise. A team like the 2004 Rangers can get rid of costly dead weight and do better. Other teams, particularly those with older players, can get stuck in a cycle of paying more for players in decline. Last season, that description matches the Mets and the Tigers, who ranked second and fifth, respectively, in payroll increase and didn’t make it to the Division Series. By contrast, the Dodgers and Nationals were third and fifth, respectively, among payroll cutters, and they played into October.

So what does it all mean? Well, for the most part, nothing. You can’t make a blanket statement that more spending = more wins, or less spending = fewer wins. Last year, those equations worked for teams like the Cubs, who added the most payroll, and the Phillies, who cut the most. But it didn’t for several other teams, and over the course of the past 16 seasons, no pattern has emerged. A lot goes into team payroll decisions, and player performance and health are really, really hard to project.

So if your favorite team seems to be on the verge of contention and pays up to add new talent, it very well might work! Or it might not! Sorry, but I don’t see how we can say anything more than that. I hope I’m not letting Sky down.

You need to be logged in to comment. Login or Subscribe
jfranco77
Can we do this only for spending on players over 30, or something like that? There are 2 effects here - Addison Russell gets better, hits his arb years and costs more. Team payroll has to go up, wins may or may not. Or we sign Jon Lester as a free agent, payroll goes up and wins should go up too.

I'm sure the graph is skewed by the fact that the Angels can spend 510k more on Mike Trout and get 10 wins better. I'm just not sure how to fix it.
Reply to jfranco77
mainsr
Good idea. I'll look into that for a future article. Thanks.
Reply to mainsr