Maybe the coexistence of those first two facts, within the context of this third fact, doesn’t strike you as odd. It’s not hard to grasp, after all—two pitchers made opposing tweaks to their repertoires, big whoop.

You could look at all that and choose to see no real common thread. Or you could look at them and think that any two baseball happenings that turn into spiky things on an internet chart will also cut some sort of shape within the clubhouse, where their effects are even more immediately noticeable in adrenaline and endorphin levels, in the volume of the postgame music. And once you think that they are manifesting there, it’s hard to miss the connecting thread.

There are two pitchers, each doing his best to get over a hump, or find his best self for the stretch run. There are two different solutions being offered to them, while they’re on the same team and being shepherded by the same steady hand.

Baseball teams seem to be increasingly fond of grand plans, of systematic plots meant to exploit some personnel surplus or shortage, or a ballpark advantage, or a perceived strategic opportunity. Moore’s former club, the Rays, have such a homogenous pitching strategy that its premeditation is widely acknowledged. That strategy goes something like this: Throw high fastballs and things that play off them, collect the highly valuable resulting whiffs, and live with the accompanying risks.

Pair it with, say, the league’s best center fielder and a staff full of pitchers selected for velocity and high spin rate four-seamers, and it seems like a pretty good idea! But it’s very unlikely that any plan applied to a staff of five or 11 or 12 different pitchers—even if it's well-laid, or the best-laid—will work for everyone involved. It looks like it didn’t work for Moore.

Part of the reason might be his command. He doesn’t have much of it. Among the 144 pitchers who threw at least 100 innings in 2016, Moore ranked 142nd in CSAA, BP’s command metric. There are good and great pitchers down in this range, too, so it’s not the full explanation, but throwing high, 93 mph fastballs without a great idea of whether they’ll be high-and-tight or high-and-down-the-middle is riskier than fellow poor-control pitchers Max Scherzer pumping 95 or Jake Arrieta whipping a nose-diving sinker.

Moore’s four-seamer itself, regardless of control, was also less suited to the Rays’ strategy than the fastballs his teammates were throwing. If you want to throw your fastball high, you generally want it to have rise—to defy gravity more than the average pitch and more than hitters’ brains expect. In terms of vertical movement, Moore’s was middle of the pack (61st) among the 128 pitchers who threw at least 500 four-seamers in 2016. Every other Rays pitcher who met that qualification ranked in the top 38.

To watch Moore is to watch the catcher’s target move, and that didn’t change when he was traded to San Francisco in a deadline deal. But the original locations of Buster Posey’s targets did change—and so did the eventual destination of Moore’s pitches—bringing a new emphasis on working the pitch in and out, rather than up. Considering the pitch had the eighth-most horizontal movement among that qualifying group we mentioned earlier, that makes a lot of sense.

A cutter also joined the fray in a big way, and maybe that isn’t surprising. The Giants have added cutters to repertoires before. Recently, they extended Jake Peavy’s usefulness with such a change. If the Giants have a club-wide pitching philosophy, it might be a tendency to discourage over-reliance on the fastball, but there is a key difference between their vague tendencies and the (by degrees well-known or rumored) blanket rules of the Rays or the Pirates or the Orioles. 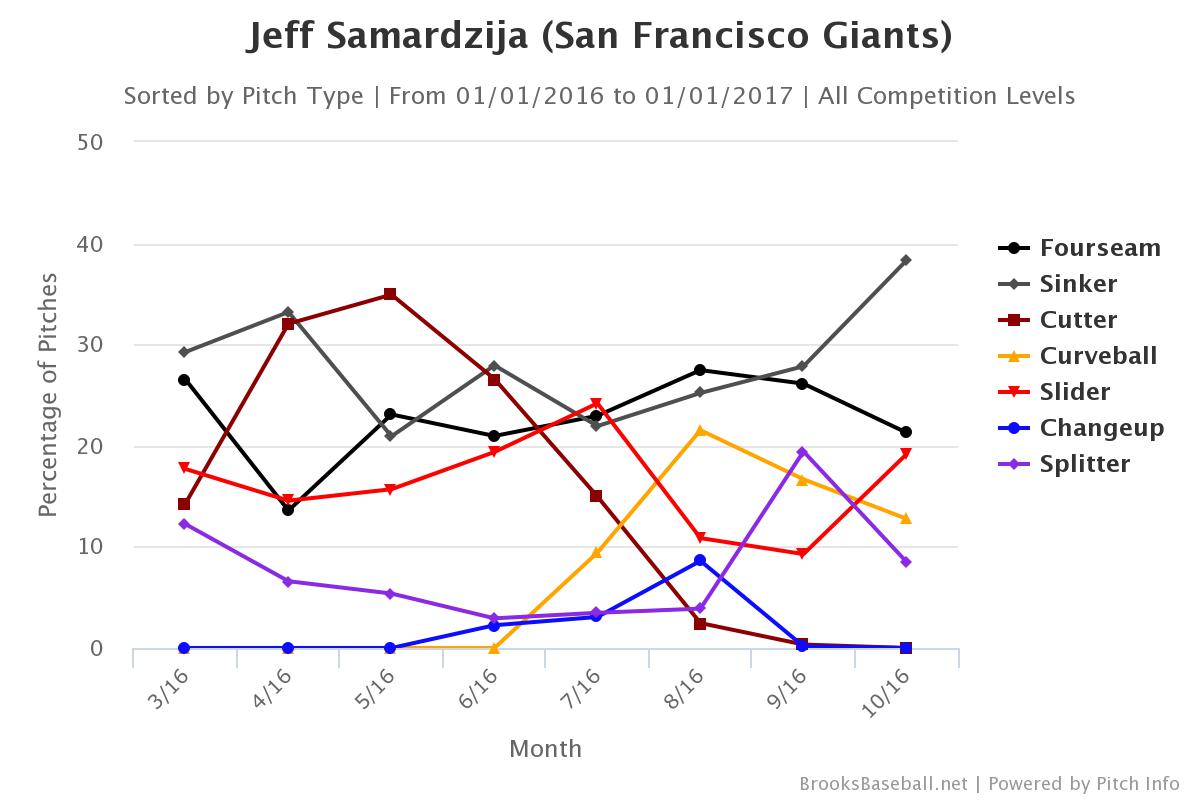 Samardzija abruptly ditched his cutter in late July. He simultaneously injected a curveball we haven’t seen from him since 2012 into the mix and gave us a look at another confident change of direction.

The results of these changes don’t actually matter to me, though they were good and/or promising. Because this is (surprise!) a Buster Posey article.

Pitchers try to change, or add pitches, all the time. Rarely do they stick with it, and even more rarely do they make these moves with the confidence and consistency shown by Moore and Samardzija last year. There are, undoubtedly, many places to dispense credit for these successful-looking projects. One major place would be with the Giants' front office and coaching staff, which doesn’t appear to enforce any rigid rules or push any doctrines upon their pitchers.

But in the continuing march toward understanding a catcher’s influence on the game, I want to consider Posey’s role in this.

We know he is a good framer, and that should give his pitchers an advantage in staying out of the middle of the plate. We also know that Moore doesn’t have good command, and Samardzija wasn’t much better in 2016. The idea of framing, and that Posey is good at it, has almost certainly bounced off their eardrums. Whether they utilized that information in any way is, um, doubtful.

His more broadly defined reputation is likely playing a larger role here. I don’t know how many catchers would call for 23 curveballs in one game from a pitcher who hasn’t thrown a curve competitively in four years, but I’d imagine a lot of them might get shaken off.

You laugh, but this anecdote came straight from Moore’s mouth to the Sacramento Bee in August:

Before Buster Posey caught Matt Moore for the first time in a game last Saturday, the Giants’ catcher asked the recently acquired left-hander if he had thrown a cut fastball in his career.

Moore had experimented with a cutter for part of last season. But he scrapped it and had not thrown the pitch this season. Still, when he and Posey played catch before Moore’s start against the New York Mets, Moore threw some cutters to give Posey a look at the movement.

The idea of Searage Magic, and the proliferation of supposedly roster-optimized rotation strategies, has always run counter to the obvious truth that every pitcher has his own strengths and weaknesses, and that they reveal themselves gradually, in the course of facing major-league competition. Asking every pitcher to do one thing may be a great experiment to test when and how to use that particular thing, but it isn’t likely to produce better results.

But an adaptable mind behind the plate, consistently pushing pitchers toward something individual, specific to their abilities? If there were such a thing as pitching magic, it would look more like that.