It’s here. The time has come for baseball, for the poets to hunt for beauty in the chloroplasts of blades of outfield grass, for the drunken bravado of the common fan to look at the empty standings and cash in future dreams. Opening Day is that perfect moment between the too-long spring and the too-long summer, the breath right before the orchestra plays. Every moment can be like this if we want to be, but Opening Day is the one when it is.

It’s also the final moment when every team is tied for first place, chances still equal, even though they really aren’t. Everyone knows who the favorites are, to some degree, thanks to the projection systems, talent evaluation tools, and previous experience. These notions are hardly new; power rankings are as old as experts, then fortified by the leanings of Vegas, then the analysis of early fantasy scribes.

That we can say, now, that the Padres’ playoff chances are 1-in-30, and that their World Series odds round down to zero, seems a little cruel on such a fair day. But it’s not as though the 1974 Padres had better chances for our lack of ability to calculate them; their fate revealed itself eventually. The projections could almost be considered a warning, or a kindness.

The real trouble with projection systems is that they’re frozen in time, and they tend to freeze us along with it. We get caught up in the Opening Day lineup, the fifth starter who inevitably becomes a third starter or none at all, the sum of 25 men on a roster instead of the 40-50 who eventually grace it. Resisting such static thinking requires a sort of mental training, a sort of repeating and ever-changing chautauqua, a string tied around our fingers to remind us: Things Will Not Seem Like This Tomorrow.

Last year, Sam Miller approached this by delving into 10,000 different universes, all with a single starting point. He showed us what a 123-win Mets season would look like, a 39-win Twins season, a Rockies-in-first/Dodgers-in-last season. None of them happened, but all of them could have happened. With this in mind, I’ll try to do what most writing tries to do: say the same thing in a different way.

A quick glance at the projected standings tells us, among other things, that the Blue Jays will win 81 games. Except, of course, they are not saying that; that’s the difference between projections and predictions. What PECOTA says is that this is both the mean and the median result, not the only result. Using binomial distribution, using 162 events and a perceived .500 winning percentage, PECOTA actually believes the team will look like this: 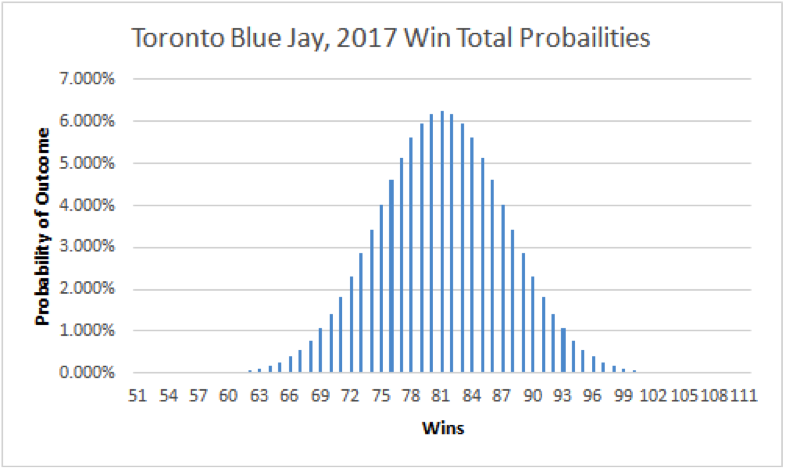 It’s a pleasing shape to the eye: this is the sort of normal distribution that makes the world feel safe, predictable. It’s not actually a perfect representation; imagine a higher rate of outcomes at both ends and less in the middle, as a team having an extreme season is more likely to make transactions to amplify its current winning or losing status. But you get the idea. Only, this chart isn’t particularly intellectually honest. The real results will look more like this: 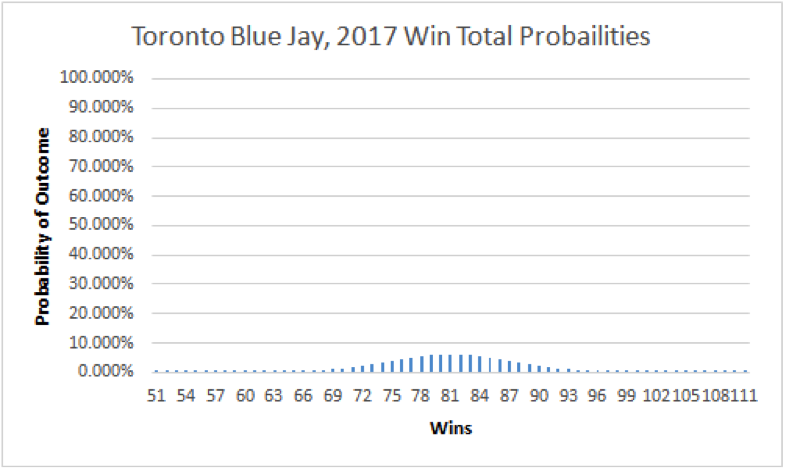 The Blue Jays are projected to win 81 games, and yet their chances of winning exactly 81 games are only 6.52 percent. In a world as intricate and long as a baseball season, no one given result is likely; there are just too many universes to end up in. This is a good thing; we don’t actually want it to be too obvious who’s going to make the playoffs six months from now, even if doing so would make us feel smart. It would take the fun out of the game. And for the folks who hate PECOTA, and the idea of projection in general … well, there’s a 93.48 percent chance they’re going to be at least a little right.

To provide more perspective, here are the probabilities of each team reaching certain arbitrary benchmarks: 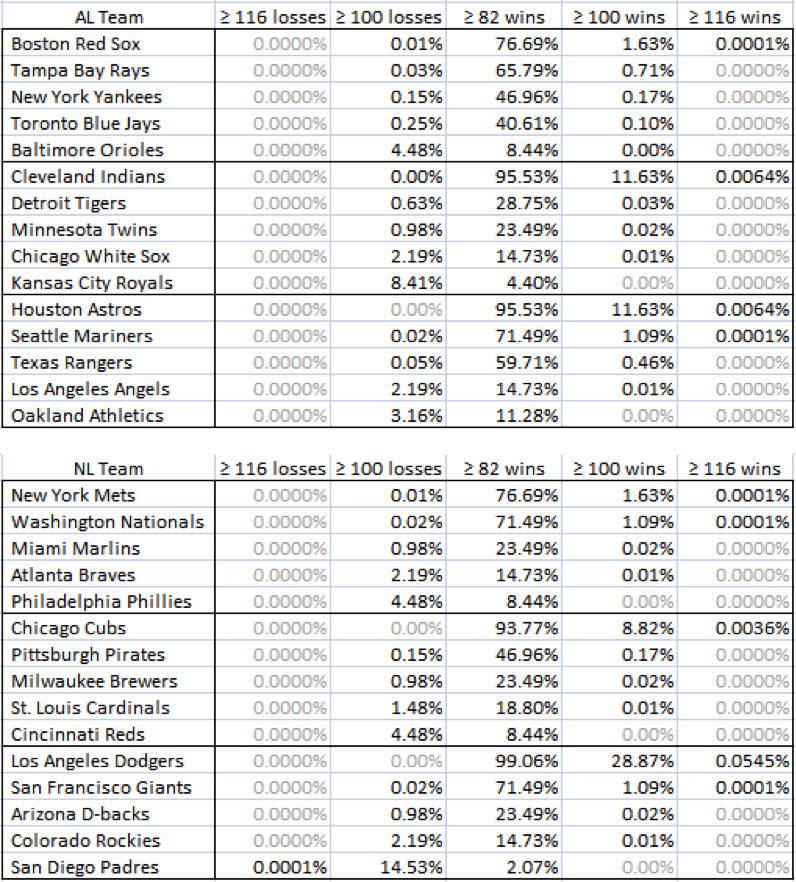 Again, the extreme results are more likely, at least the 100-win and 100-loss plateaus; when it comes to those extreme outliers, we’re probably looking at a roster that is impossible to improve, or has nothing to sell. (The 2001 Mariners claimed Gene Kingsale off waivers from the Orioles on July 10, and purchased Pat Borders from the Devil Rays on August 27; they combined for 25 plate appearances.)

The easy answer is just to have them play the games, check back in October, and craft the narrative that culminates in the predestined glory of the 2017 World Champion, oh, say, Brewers. The more honest approach is to accept uncertainty, both in the game itself and the systems and experts that reflect on it. There are plenty of outcomes, in the past and in the future, where we all made the wrong call. Predictions will go wrong, dark horses will rise. It’s impossible to remember, let alone recognize, the exact moment when the final truth became clear, a point between six percent and one hundred.

It’s not fun to do this. We live in a world where certainty is necessary, even if it’s artificial. People can’t get through their daily routines if they have to anticipate every possible outcome or malfunction. And from a sports standpoint, the idea that teams or players can just be bad sometimes, for no reason, is utterly dissatisfying. And yet it happens whether we want it to or not; look at Nori Aoki’s career batting lines, and then check his first- and second-half splits from 2016.

Nobody correctly guesses when the beige Impala veers into their lane on the freeway. The truth is that we are all wrong about almost everything almost all of the time, and the only thing that saves us is to limit our scope to such a tiny window of questions, and in the most reliable of situations, that we usually get by. Baseball, for all its data, is no different. To contradict Nietzsche: It’s not true that what doesn’t kill you makes you stronger. What it does do is give you an opportunity to change your mind.