While you were staring out the window this winter like Rogers Hornsby probably didn’t, playwright W.M. Akers was building a dice-based baseball game to while away the cold winter hours. The result, Deadball, is in the middle of a very successful Kickstarter campaign. I played a few games, spoke to the creator, and reviewed the well-designed materials, and I have to say that it captures the spirit and feel of the sport in a compelling way. It’s not perfect—which is good, because baseball certainly isn’t—but I heartily recommend it to the daydreamers, Out Of The Park fans, history buffs, and anyone with an old bag of d10s laying around. 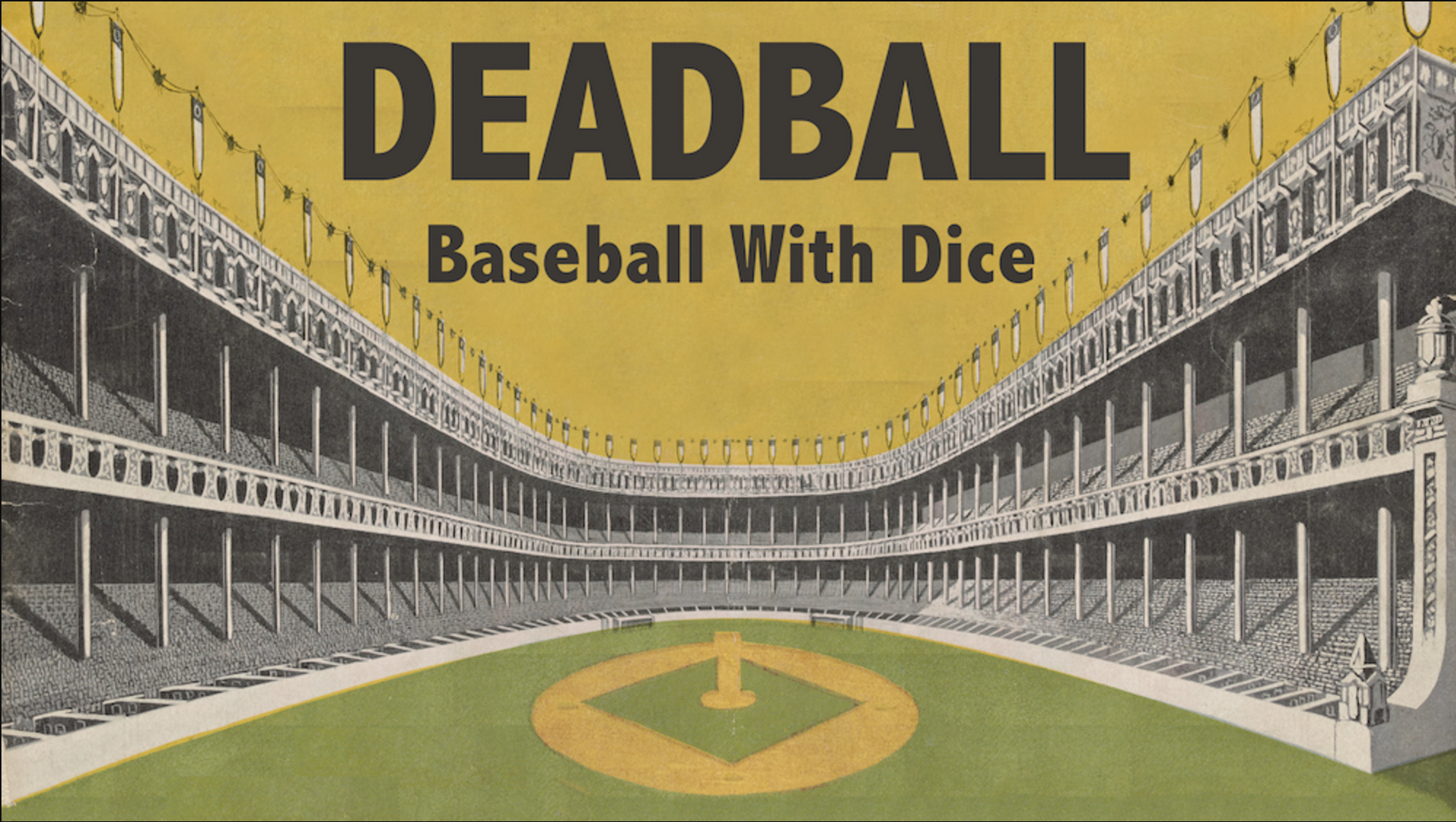 I’ll refrain from going too much into detail about the game mechanics—it’s not called Long Relief, after all—but while there’s a short learning curve, Deadball swiftly allows you to fall into the comfortable routine of filling out a baseball scorecard. I think that’s the best bellwether for whether or not you’ll enjoy this game: if you like marking F-8 in your program, tallying strikeouts, etc. … you’re bound to like Deadball. There’s enough minutiae to represent most of baseball’s weird, idiosyncratic events (special dice rolls for sac bunts, platoon rules, even steals of home), but the major play mechanic of “roll dice to beat a Swing Score, then roll for the pitch, hit, and defense” is breezy fun.

My experience with playing the game was emotionally mixed in the best possible way. A glutton for punishment (read: a Mets fan), I chose to replay the 2016 Wild Card Game between the Mets and Giants, using the lineups from the October tilt instead of the fictional players that come with the game. (It’s incredibly easy to adapt real-world stars to Deadball with just a few stats.)

As I’ve noted before, in the real world this matchup felt like destiny, with the Giants certain to ride Bumgarner into another NLDS against a Mets lineup completely unready to face a dominant lefty. I used Deadball to run this game back three times, the Mets winning the first but losing the second and third, and each time Madison Bumgarner threw a complete game and limited the Mets to three or fewer runs. Destiny, but different.

It felt right when Noah Syndergaard struck out 10 in seven innings, or when Brandon Crawford hit an unexpected dinger to put the Giants up, or when James Loney grounded into yet another inning-ending double-play. I felt real excitement when Thor struck out the side, effectively “leveling up” and improving his stats for the next inning. The little things matter in baseball, and the small unexpected turns are reflected in this game too, thankfully. W.M. probably said it best when I asked him about what Deadball’s greatest strength is:

“There’s a fundamental moment in baseball: you’re waiting in the stands, you’re waiting for a pitch … you know what you want. When it happens, you flip out. In this game, you can get that.”

It’s true. And you can get the tiny melancholy disappointments too. Despite being played with dice and paper, the action happening in your mind, Deadball is real enough to be a compelling baseball substitute during the long winter months, the lonely evenings, or any time in between. Like the best baseball-adjacent games, it possesses the right aesthetics to make it familiar, enough complexity to make it real, and plenty of room to invent our own successes and failures.

(Check out Deadball online, support the (already-funded!) Kickstarter if you like, and check out W.M.’s new play Dead Man’s Dinner if you’re in New York this spring.)

As Las Vegas adds two professional teams, the Raiders and Golden Knights, it’s worth noting that they weren’t the first in the town. The city has had the 51s (or, Stars), a Mets Triple-A team, in some form since 1983. But they were preceded by an even more short-lived and less well-known ballclub, the Las Vegas Wranglers.

The Wranglers existed by what is now the Dula Community Center from 1947 to 1952, and if the concerns of a small fan base exist today, imagine when the population was only about 20,000. The most interesting tidbit about them might be a single game they played in their inaugural season.

On August 31, 1947, well-known actor Cameron Mitchell pitched two-thirds of an inning for the club, allowing 11 runs. Mitchell was on a rise to stardom at that time, co-starring in The Mighty McGurk that year, and he would put together a much more prolific acting career than his pitching one, with an astonishing 241 credits to his name. He was most known for his role as Uncle Buck Cannon in the Western TV series, The High Chaparral. 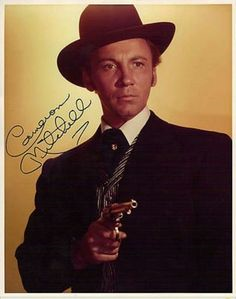 There’s no mention of his baseball career whatsoever on his Wikipedia and there are no photos of him playing, and the only three sources available were a blog post from author Bob Lemke, a 1973 Vintage article, and an article from the Nevada State Journal on the date of the game.

All three sources paint an interesting picture: on August 18, Mitchell pitched for a team called the Hollywood Stars (owned by a group of actors, hence the name) against the then-minor league Los Angeles Angels for a cancer benefit, assembling four shutout innings. He was then offered a pro contract from the Wranglers’ GM, and was scheduled, according to the Journal, to pitch both the August 31st game and another before the season ended. He never got that second chance. He also claims to have singled off of Satchel Paige at seventeen, and it’s the only other anecdote we have of what could have been a much more interesting story, that of a famous actor who played semi-professional ball as a hobby.

Baseball in Las Vegas bears no resemblance to 1947, as very few things do. Minor league teams aren’t often owned and run by celebrities, except sometimes. And while actors sometimes play baseball players for fun, it’s hard to imagine an actor today having a contract stipulation that he would pitch on weekends. When the puck drops in Las Vegas for the first time, remember that this wasn’t the first pro team, because the Wranglers were there first, and Buck Cannon was on the mound, for a long moment.

Spelling It Out with Larry Andersen

On the evening of Monday, March 27, the Philadelphia Phillies and the Toronto Blue Jays played a Spring Training game that seemed excitingly like Real Baseball, at least as far as the lineups were concerned. Of course, as the 27th was the last Monday without regular season baseball until October—excepting Monday, July 10, which is the night of the Home Run Derby, which is either baseball to you or it isn’t, and you have to work that out for yourself—this is to be expected. And as an auditory showcase of the Phillies’ radio broadcasters Scott Franzke and Larry Andersen’s regular season form, the game approached their particular Platonic ideal.

What I mean is this: in the game’s three-hour duration the duo exhibited all of their habitual schtick—a word I use here with great affection—with mid-season gusto: Andersen complaining about the plate umpire, Franzke pointing out Andersen’s infelicity with technology, Andersen angling for an earlier end to the night (due to some apparent dimness in the lighting at Florida Auto Exchange Stadium), Franzke needling new Phillies hitting coach and former television commentator/bench bat/hero Matt Stairs. Everything was revealed, all things comfortably in their places.

In the bottom of the eighth inning, with the Phillies still up by six runs, the baseball game drifted back into spring-mode; the Toronto starters ceded their positions to non-roster invitees and prospects taking one last sip from this particular Gatorade jug, like Cavan Biggio. Biggio’s arrival at the plate predicated this exchange:

ANDERSEN: “Yeah, I get that confused with E-I-E-I-O, which spells ‘farm.’”

Such a response epitomizes Andersen’s ethos as the color guy: a little nonsensical, intentionally uncerebral. But Franzke wouldn’t let it go, carrying on not only about Cavan Biggio but also his brother Conor, which was, of course, designed to put and keep Hall of Famer Craig Biggio in mind. Each reference washed up against the ears like a cresting wave, but Andersen would not take the bait, and when Matt Dean struck out swinging and the commercial break came, the waters stilled.

The story in the radio booth was not about Cavan Biggio, who popped out to center, or even Craig Biggio. It was the one we already know: Larry Andersen, butt of what some call the worst trade in history, the one that sent a middling middle reliever from Houston to Boston for a prospect named Jeff Bagwell, straight up. 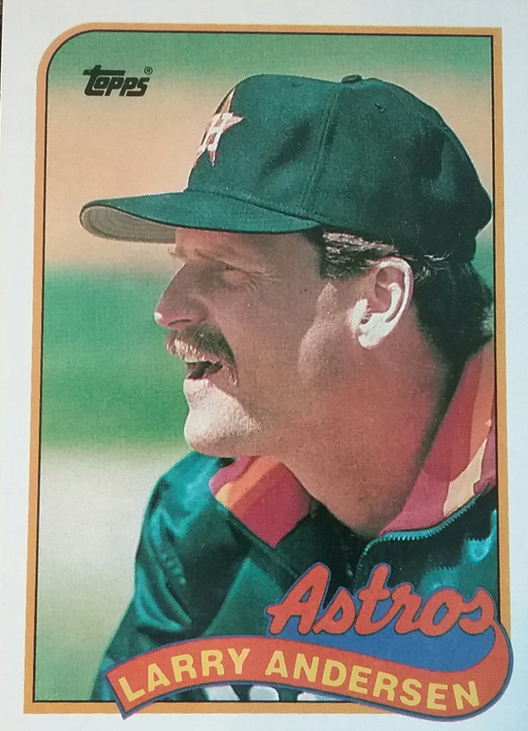 Biggio caught Andersen’s final appearance for the Astros, in which he garnered four strikeouts and a save in two scoreless innings during a 1-0 victory over the Chicago Cubs. Despite the way history would eventually read that trade, it was an exit on a high note, at least en route to Boston entering the post-season atop the AL East. At the end of the 1990 season, the Red Sox would be swept out of the ALCS, but no need to say that now. Baseball is a game much marked by chance, by future happenings that stand contrary to present evidence, its history more full of sore reminders and short-lived heroics than legends. There’s no need to spell it out.