Television broadcasts create a false sense of intimacy. Above is Dusty Baker reacting to Daniel Murphy popping up against Clayton Kershaw in Game 5 of the NLDS. He isn’t finding the camera; his goal is not to engage in a knowing, Jim Halpert stare. He’s watching Charlie Culberson make a catch. He might be glancing at Kershaw and wondering what kind of luck you have to have to run into baseball’s best starter in relief. But he’s not seeking us out.

We know how it feels to be disappointed, so in some ways we understand what it feels like when the last out of your season falls to whatever poor Wilmer Difo can manage against Kershaw. We’ve had home refinancings and new jobs fall through. We know about disappointment. But we don’t know this particular kind. We don’t know what it’s like to right a clubhouse and your own reputation and then watch this.

That’s the weird trick of TV. We think we know. We think we feel it along with Dusty. And we’ll make that mistake again. We think we’ll feel the same thing they do if the Nationals make it out of the NLDS this year. That’s what we’ll remember feeling. 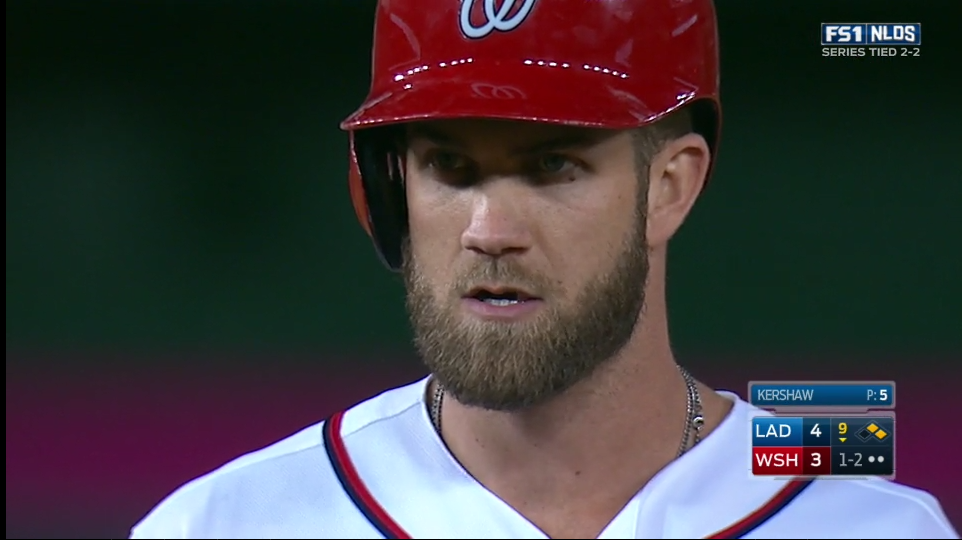 You have to wonder what exactly Bryce Harper is thinking in this moment, with two strikes on Difo and Kershaw pitching. Was he still in the moment or had acceptance begun to kick in? How much did he blame Difo or God for getting this far, while doubting he’d go farther? He was picked off at first base earlier in the night. How much did he blame himself?

The Nationals have gone to the playoffs three times.[1] Like their own off brand of Even Year B*llshit, they have been knocked out in NLDS each time, with the Cardinals, Giants, and Dodgers taking turns. If it happens again, it will take on the status of a narrative until it isn’t one; the kind of story that obscures the usual volatility of baseball and makes us wonder just a bit if there’s something else at work.

A not small subplot in the drama of whether the Nationals will fall prey to an early defeat will be the performance of Harper. After a 2015 that saw him post a .330/.460/.649, 42-homer, 11-WARP season that drew non-crazy comparisons to peak Bonds, 2016 Harper was diminished. He put in a strong April, but then fell strongly to earth. He was sapped of his power.

As Rob Arthur noted at FiveThirtyEight, his 2015 may have been driven by an usually high value on his batted balls; in 2016, his exit velocity declined and his launch angle increased, resulting in more pop ups and fewer wow moments. Many speculated that he was playing through an undisclosed injury. The Nationals survived Harper going from great to merely good; they obviously still made the playoffs, and Harper is only one player. Spring training stats don’t have much predictive value, but Nationals fans had to be happy to see Harper report to camp fit and focused and seemingly Harperish.

Harper isn’t the only player the Nationals will rely on to drive what is projected to be a strong offense. Daniel Murphy returns. Trea Turner will dazzle with power and speed and won’t have to play center field in his follow-up to an almost-Rookie of the Year season. After trading for Derek Norris, signing Matt Wieters, and then releasing Derek Norris, the club has settled on a replacement for Wilson Ramos behind the plate. Adam Eaton will roam center field at great to otherworldly levels depending on your optimism. Adam Lind will be a considerably less impressive “Adam,” but a nice bench piece.

There are other guys the Nationals will lean on. It does not come down solely to Harper, but at times it might feel like it will. Unburdened by the dysfunction of 2015, freed from whatever injuries 2016 held, 2017 seems like the year we’re supposed to finally and definitively know who Harper is, and what kind of baseball player he’s closest to. Only time will tell, but we can imagine he’d like to start with being the kind who doesn’t have to blame himself quite so much. 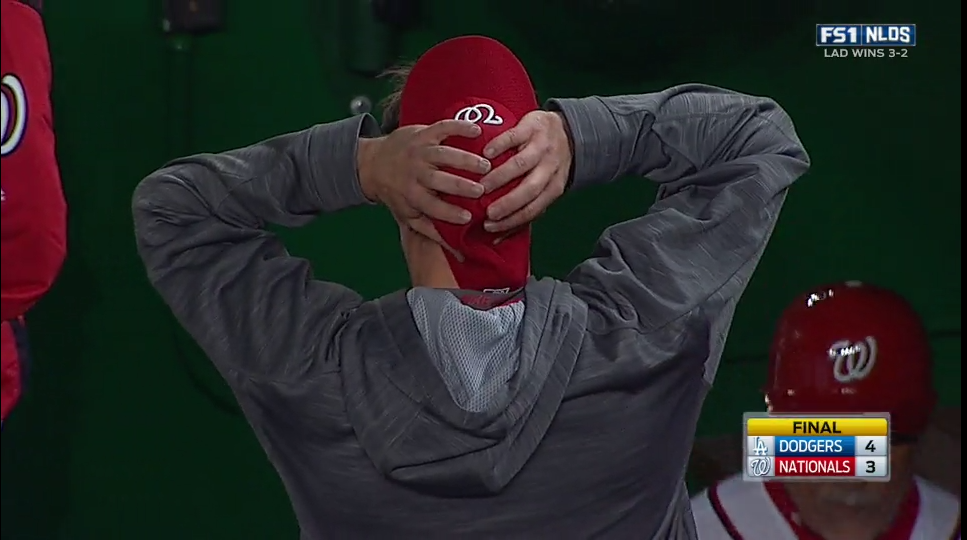 The Nationals' rotation has the makings of something great if a bit fragile; the Nationals' bullpen is a little weird. Scherzer’s Cy Young season featured a 20-strikeout start, a career-high strikeout rate, and a faster four-seamer. And with Scherzer followed by Stephen Strasburg, Gio Gonzalez, Tanner Roark, and Joe Ross, their 11.7 WARP projects as second-best in the NL behind only the Cubs' starter’s 11.9. They’re not without injury risk, because they are human pitchers with histories. Scherzer has been dinged up with a knuckle injury, and Strasburg is now pitching exclusively from the stretch to maintain strength and hopefully ward off injuries like the one that sidelined him last September. But if they can avoid that, there’s greatness here.

The bullpen is a little weird. It’s not necessarily a bad weird. It left the Nationals open to being called a bit cheap after failing to secure any of the big-name closers on the free agent market this offseason, though that’s a bit unfair when you consider the serious run they made at Kenley Jansen. There are very good pieces here, even if it is without an Aroldis Chapman or a Mark Melancon. They got Joe Blanton on a reasonable deal by being willing to wait, have Shawn Kelly, elevated Blake Treinen, who displays some attributes that are like Zach Britton and others that are not, to closer, and brought on Enny Romero. And Koda Glover sits there, a waiting human pun. And Sammy Solis. And and and. It’s a bit weird but deep enough that it should work.

It’s unfair of us to ascribe so much meaning to when a team loses in the playoffs. It could happen to anyone. We read advancing through a small collection of games as progress for a franchise, as if the manner in which you win all the games that get you to the playoffs isn’t a much better gauge of that. Except, those games at the end of the season sit so close to us no longer having baseball to watch. And of course, they’re so near to shiny, immortal things. We call teams winners and losers based on that, and they technically are, though perhaps not in a way that is existentially significant. But we do it anyway. We want our guys to move forward. That’s what we’ll remember about the 2017 Nationals, even if we won’t know quite how they’ll feel.

[1] Whatever the Nationals website indicates, the Expos lost the NLCS in 1981.

You need to be logged in to comment. Login or Subscribe
EROICA
WOW !! Great Article. You have an insightful way to tell the story and invoke the memory of Difo vs. King Kong Kershaw. I look forward to your future articles !!
Reply to EROICA