Cleveland's bullpen was the enduring narrative of the team’s postseason achievement last year—its success and its strategy and the extent to which those two things were or were not connected. It was a harbinger of the bullpen revolution. It was the bullpen revolution. It was just a throwback. It was marginally advantageous managing that only looked so good because we were seeing it with a reliever as talented as Andrew Miller. It was, depending on whom you heard or read, any of these things or none of them.

This is all to say that there’s been plenty of debate on what Cleveland’s bullpen strategy means for baseball. There’s been a little less on what Cleveland’s bullpen strategy might actually mean for Cleveland—now in a full season with Miller, rather than simply down the stretch and in the playoffs as we saw last year after the team acquired him at the deadline. There’s an answer here that is equal parts simple, obvious and true: it means something good. Sure! That’s a very fair statement to make about having Miller and his unhittable slider in your bullpen. But the form that something good might take is a question of what Cleveland’s relief strategy looks like in April, as much as it is one of what it looks like in October—and that means that, even after all of last fall’s debate, this likely won’t be a year that we remember the team for a bullpen-management revolution.

There is, perhaps most obviously, the fact that what we saw from Cleveland in the postseason can’t easily be transferred and extended to fill a regular season. The idea of overuse is far more pressing and more dangerous when the ideas here are extrapolated beyond October, and manager Terry Francona made it clear last fall that the success of his bullpen strategy in the playoffs didn’t mean that he was tempted to risk replicating it for the entirety of this year. During the postseason, he repeatedly said that his strategy of calling on Miller when the stakes were highest—no matter the inning or his workload from the day before—was not something that could be implemented year-round. "These guys’ arms aren't made out of titanium," he told the Cleveland Plain Dealer in a December conversation on his playoff bullpen management.

So, sure, it’s a fairly basic sabermetric principle that a team’s best reliever should always be deployed when leverage is highest. But the reality of that principle is inherently tangled in player psychology and pitch counts and guessing games that managers can’t win, as Russell A. Carleton covered in-depth through the lens of Miller right before the start of the World Series. What Francona did in October succeeded in large part because there was no need to consider November.

Beyond this straightforward issue of feasibility, there’s also the question of whether something in this direction really constitutes a revolution for Cleveland in the context of the modern game—and looking at how Francona has deployed his relievers for the past few years shows that in many ways, it’s not quite so extreme after all. The acquisition of Miller unlocked new possibilities for the team more so than it demanded foundationally new ways of thinking.

Francona had shown before that he wasn’t interested in being strictly tied to orthodoxy when it came to bullpen usage (albeit in ways less dramatic than resurrecting the traditional fireman role for his best reliever). This is clearest in the use of Cody Allen since he established himself as the team’s then-best bullpen arm and took the role of closer in early 2014. Francona used him in tie games on the road, yes, but he also used him before the ninth inning and in multi-inning appearances fairly frequently. Before Cleveland traded for Miller, they were putting Allen on the mound before the ninth inning anywhere from a quarter to a third of the time. 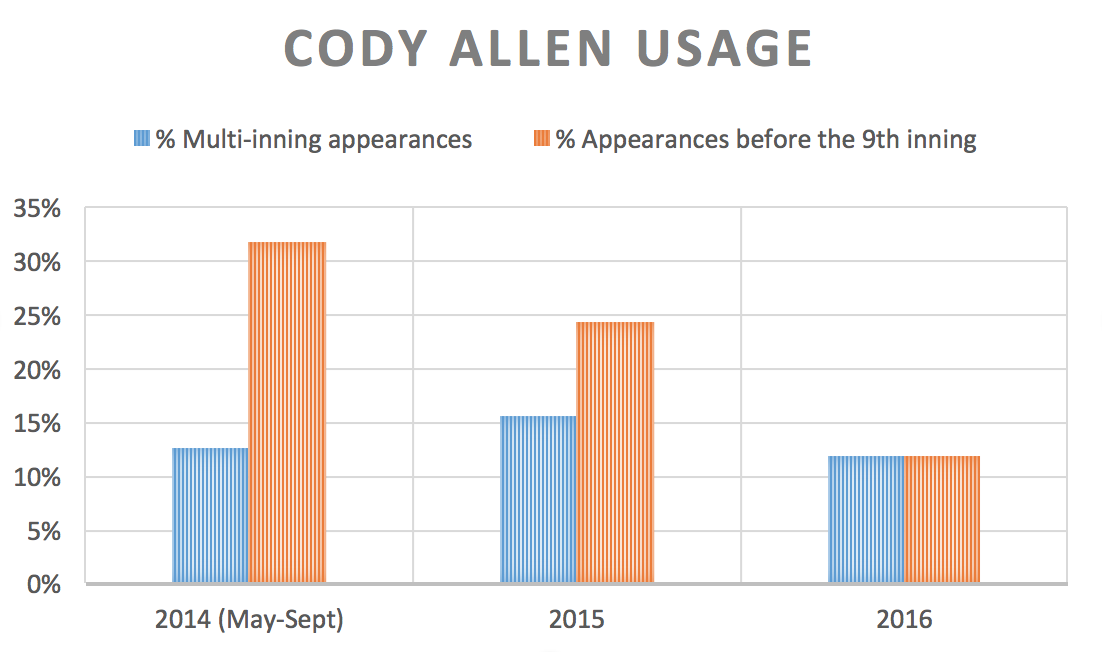 Obviously Miller's talent and presence afford Francona significantly more freedom, but that's not quite the point. The point is that Francona's time in Cleveland had already seen him start to eschew tradition a bit when it came to late-inning roles, even before the team traded for Miller. In that sense, this season won’t be remembered as when Cleveland took its endgame cheat code on the road for a full yearâ€•because that won’t be happening, and because it oversimplifies Francona's history here.

Looking beyond the bullpen, with a few notable exceptions, Cleveland will be fielding a team largely similar to last year’s American League champs. The team wasn’t particularly active over the winter, but their biggest move was a big one indeed—signing Edwin Encarnacion to the largest free-agent contract in team history represented a key upgrade over the departed Mike Napoli. In Encarnacion, Cleveland has not just a far more reliable source of power but also MLB's only player to hit more than 30 home runs in each of the past five seasons.

The other significant difference from last year’s team isn’t an acquisition, but instead a hopeful rebound. After being the team’s best position player by WARP for 2014 and 2015, Michael Brantley spent essentially all of 2016 sidelined by a shoulder injury that was treated with surgery before the season began and ultimately required a second procedure in the middle of the year. A recovery period that ran through the winter meant a slow start to the spring and no Cactus League game action until this past week, but all signs currently point to him being fully ready soon after Opening Day. A healthy Brantley will offer key support both at the plate and in the outfield, which doesn’t exactly runneth over with strong defensive options.

Another area where improved health has the chance to offer a notable upgrade from last year is the rotation, which suffered from injuries to Carlos Carrasco and Danny Salazar down the stretch. The pair join the cool ace of Corey Kluber, the very many home runs and very few walks of Josh Tomlin, and the continual inconsistency of Trevor Bauer for a rotation that can be excellent at best and is still pretty serviceable at worst.

At third base, Jose Ramirez is due for regression after last year’s breakout; at catcher, Yan Gomes and backup Roberto Perez regressed so much last year that there’s essentially nowhere to go but up. Francisco Lindor should continue to dazzle both at shortstop and as charm personified, and Carlos Santana offers his world-class plate discipline skills at first base. Jason Kipnis will start the season on the disabled list with a shoulder injury, though he’s not expected to be out long and should continue as one of baseball’s top-tier second basemen when he returns.

Essentially—this is the same team that came within a few outs of last year’s World Series title. Just with the potential to be even better.