Manny Machado is Without Fault

Manny Machado—that brilliant standout at third—corrals a groundball, struck smartly by an opposing bat, and slings to first, diamond cut in half. Crowd roars: an out by Machado’s hand. No sloppy work from our Florida-born star, now in Charm City.

If foolproof play at third is a topic of discussion, Machado is in it. For that club in Maryland or for country, Machado’s mitt snags all in his path. Nary a bunt in his vicinity is for a hit, not a slow tap nor hot smash. Lofty popups, too, Machado has, sans worry. A firm hit transforms into an out, Machado diving to his right and gloving it as a magician. Doing it all is part of his job, and Machado is good at his job. Champion of third, guardian of that bit of grass and dirt: Machado is it.

(A Rays shortstop chops a ball toward Machado; Manny sprints in, grabs it without blinking, flips it to his right hand, and guns it to first again. Out.)

At bat, too, Machado is solid. In 26 WBC at-bats, Machado hit .269/.321/.462 with a pair of two-bag hits and a longball. Young Machado’s two campaigns prior to 2017 boast 72 total bombs and slugging marks north of .500, and 2017 is only Machado’s 24th circling of our sun. Machado is always working to up his OBP, too, possibly his only flaw, and in that skill Machado is still good. Six-plus WAR, shining D, thirty blasts—this is a typical Machado collation of stats. If Josh Donaldson hits similarly to Machado, that Jays’ star with distinct (ugly) hair’s got nothing on Machado’s work with a Rawlings. Machado is that circuit’s top guy at third, no doubt.

How is good is Machado’s play at third, you ask? Manny can do it all without an E.

Scenes That Never Were

We all reminisce on what could have been: A party we decided to skip. A kiss we didn’t give. A career path we didn’t take. Every so often we stop, dwell on the past and ask ourselves: What if things had been different? 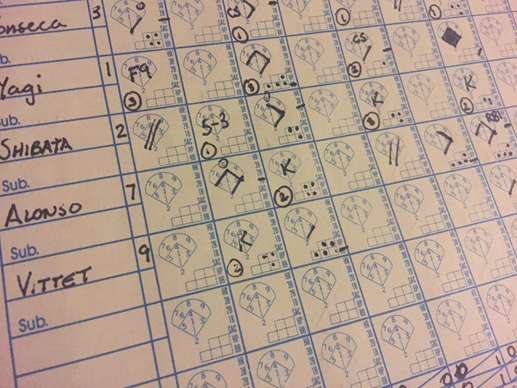 Rummaging through papers left in my old room, I stumbled across a scorecard for a baseball game I started back when I attended University. Baseball is not that big in Peru and our competition level is wanting. Even though I trained five times a week and we played one game per week, I almost never made it to the starting lineup. Despite my coach’s encouragement, my conditioning, focus on batting practice, and defensive chops, my name was written into the starting lineup just three times.

Each one was heaven for me.

Yes, this is an extremely small sample size. Yet it is precious to me. A skinny kid manning right field, so nervous that he made his first catch with his bare hand – I’ve been stung before but nothing compares to a well hit line drive. The tension before the crack of the bat sent the ball right over the leaping second baseman’s head, knowing by that sound I had hit a double. Or the best memory of all: The pats on the shoulder after a well-fought game-ending strikeout. “The important thing”, our team captain told me, “is that you went down swinging and no one can take that away from you.”

Alas, it was not meant to be. Internships, studies, and an eventual job caused me to start missing practice and games. And the times I did manage to attend, I got into my head way too much and ended up with paralysis by analysis. I started to get into numbers and stats and from there I found my way into many of the websites we frequently visit; and eventually writing.

Looking back, I could have been a player. A mediocre player by major league standards. Maybe good enough to reach High-A or even Double-A. But that’s something I can only dream of. The reality is, now I turn to writing about the game I love.

Considering where I am now, I wouldn’t trade my slash-line for anything.

Life in the Air

There are many stories about Sam Khalifa. This is a lesser one. 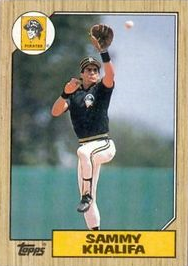 He’d led a life without buses, for a while. He’d flown planes, barely touched the ground. He was the starting shortstop for the Pirates, twenty-one years old, a first-round pick. He slugged .319 his first year. Then .225, then .176. Then .448, for Double-A Harrisburg.

By the time he made that phone call, he wasn’t really a Pirate anymore. A kid named Jay Bell had taken his job. He was in Buffalo because he wasn’t worth anything, but also wasn’t worth nothing. After the season, he’d be free. A few more bus rides, then maybe another start out west, maybe San Diego, somewhere warm. For now, it was a Louisville Wednesday, the pulse of traffic instead of waves.

He reached the station two minutes after the hour. The bus was not there.

He stood there, staring at the oil-stained pavement where there was supposed to be a bus, and thought: You spend your life creating a thing, a Sammy Khalifa. You devote all your time and your energy toward it, shut your eyes and ignore both the pain you feel and the pleasure you pass up. Some days the results are terrible, but you can always rely on the feeling of creation itself, the work, the progress. Until one day you realize that you’re not able to create anymore, that at best you can maintain what you’ve had, mostly. You created a competition out of your life, and then you lost. The bus has left without you.

Sammy Khalifa didn’t try to catch up. Instead, he walked away from the station and went to an airport. He boarded a plane heading west. One last plane.

You need to be logged in to comment. Login or Subscribe
TGT969
Pirates fans have fond memories of Sammy...now that he & the clowns who
scouted, drafted, & managed his career are long gone.

Reply to TGT969
Deadheadbrewer
I'm absolutely LOVING this series!
Reply to Deadheadbrewer
euqubudhp
Thanks! We appreciate the feedback.
Reply to euqubudhp
landcruiser65
Yep, Short Relief had been a great read every time. Keep it up!!
Reply to landcruiser65
kringent
Good stuff. Good series. One quibble. Not sure why the Sammy Khalifa piece needs to be categorized as "Patrick gets depressing" or "A dark tale". Every career ends. Not everybody gets to go out on top like David Ortiz. This is not inherently dark or depressing. Poignant perhaps but at some level it's simply life. Why are we so eager to avoid glimpsing the ordinary humanity and vulnerability of those who play this great game?
Reply to kringent
BrewersTT
It's a good point, but two aspects of Khalifa's story make it sadder than most. One is that he started off well and never could recapture that, as opposed to simply never being good enough. The other is the fact that the team didn't even care enough to hold the bus for five minutes for him.

That last bit makes the storyteller in me wonder whether there is a bit more to it, such as perhaps he was bitter and unpleasant, or maybe this was the 10th time he was late and he had been warned. But I have no real evidence of any of that.
Reply to BrewersTT
kringent
That's fair. This piece and your thoughts make me want to know more about Khalifa. This is compelling reporting and storytelling, which is is why I question why it needs to be labeled in a way that almost seems defensive or apologetic.
Reply to kringent
euqubudhp
Or the author/editor was just in a dark mood.

Beyond the links at the beginning of the piece, the remainder of my Sam Khalifa knowledge, that didn't make the piece:

1. Once, about ten years ago, the Pirates had a between-inning trivia contest on the jumbotron, and 81 times, answer D was Sam Khalifa. It was correct once, on the final game of the season.

2. In the early 90s, the Pirates clubhouse had an award (an actual bronze statuette, purchased from a nearby trophy store) that they gave out after each victory to the player who made a boneheaded mistake. They named it the Sammy, after Khalifa.
Reply to euqubudhp