In “La Vie Boheme B,” the cast of Rent sings, “The opposite of war isn’t peace, it’s creation.” The Padres aren’t at war, despite 2017’s impending skirmish with futility, and might offer their own interpretation of Larson’s lyrics: it's the creation itself that is the battle.

We won’t remember what this Padres team does on the field. Projected for the fewest wins in the National League, they’re likely to be anemic at the plate and Piñatan on the mound. We’ll know they existed, because there wasn’t a baseball strike in 2017, but in a few years we won’t remember any facts about them. They’re an intellectual exercise. They won’t distract us from national politics or sunburns or heartache. Some fans will drink too much. Maybe Manuel Margot will win Rookie of the Year; if he does, we’ll think it happened in a different year closer to the next competent Padres team.

It’s tempting to think the Padres have leaned into the forgettable soup they’ve made; their offseason uniform redesign stripped away what remaining yellow was left on their base home kit, leaving behind a wispy white and unremarkable navy. They seem destined for the sort of season we rattle off as part of a range of years known as The Bad Times. It’ll be a bummer for San Diegans who find themselves with no other professional sports franchise to cheer for; if creation is the battle, it’s being fought mostly on other fronts in El Paso and Fort Wayne and Peoria. Their bywater will be passed over.

This team is built to lose now, and we won’t remember how it does. Except, that wasn’t my assignment. My assignment was to tell you how it would be remembered and so, as much as it will be, I think we can split this part of the battle between the trenches and the reinforcements.

The Short Term: The Trenches

At my day job, we each have nameplates on the outside of our cubicles with pictures meant to reflect our interests. Some people have themselves hiking or fishing or hugging little dogs. The marketing guy responsible for making the plates is a bit of trickster. This was the proof of mine: 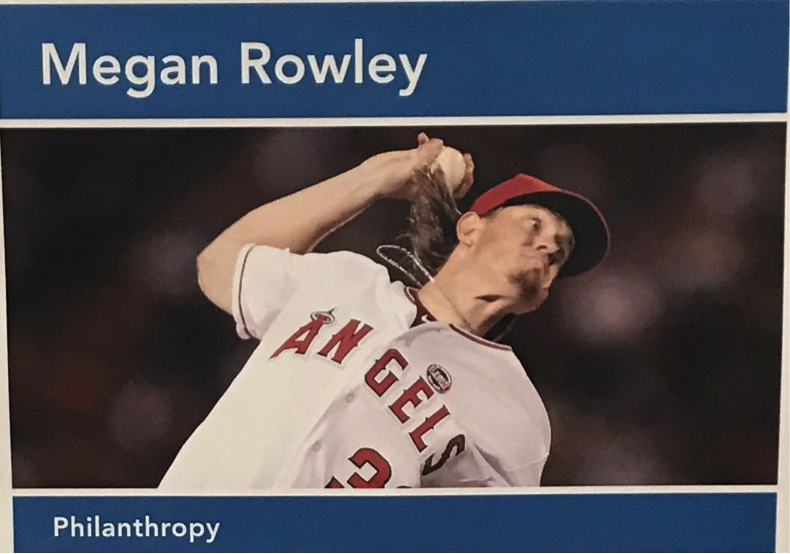 This was a mean joke. Jered Weaver probably gave up a home run moments after this picture was taken. It suggests I’m not very good at my job.

The Padres know this is going to be a bad baseball team. That’s an important thing to know for an organization’s long-term decision making, and something that just two years ago, they badly misjudged. But it also means signing veterans like Weaver—who is arguably worse at his harder job than I am at my easy one—to fill in the holes while they’re stuck in the trenches.

It could be worse, of course. They could be committed to paying their rotation a lot more money for many more years. Instead, Weaver signed a one year deal for $3 million. Clayton Richard and Opening Day Starter Jhoulys Chacin[1] came aboard for a year and $1.75 million each, as did Trevor Cahill, who will contend with Jarred Cosart and Luis Perdomo for the final rotation spot, though we can expect they will all see action at some point. They project for 1.7 WARP, divvied up like so:

The bullpen, returning Brandon Maurer, Brad Hand, and Carter Capps, actually looks to be pretty decent, if a bit squishy in middle relief. The thing is, bad teams don’t need good relief arms for long playoff runs and do need more prospects. The worst-case scenario is that the bullpen isn’t very good; the best-case scenario is that they’re good enough to be traded. That’s the 2017 Padres bullpen; your good Christmas present that is given to your sister four months later.

Maybe they’ll get creative with their rotation construction, as Bryan Grosnick suggested they should. The team has indicated they'd consider it. Maybe a few guys will surprise, and Weaver will get a tick back on his fastball[3]. Maybe Capps will find add a new wrinkle to his delivery, only to have it legislated away come August. Maybe. But in all likelihood the Padres, knowing they’re a bad team and acting smartly, will throw out a bunch of middling, one-year rentals and Luis Perdomo, and subject their fans to game after game lost before they ever get to a good bullpen that might be traded, and lose in that way that makes you mad for moment before you forget completely.

But Christian Bethancourt will pitch occasionally as a two-way player. Maybe we’ll remember that until it becomes unfun. Fun doesn’t last long in the trenches.

The Long Term: The Reinforcements?

Of course, more than just the rotation will take the field. Some of them will quickly fade, like Luis Sardinas. But some of them will be part of the next interesting Padres team.

After a healthy 2016 and an extension that will keep him with the club until 2022 with an option for 2023, Wil Myers will man first base. It is a very Padres thing that a player who only played 60 games his first year with the team would be the face of the franchise, but here we are. The top prospect in the system, Margot has the potential to be a defensive standout, and will get the opportunity to show what he can do against major-league pitching. Hunter Renfroe will mash some dingers probably. Travis Jankowski might answer some questions about himself. Austin Hedges will continue to combine good defense with a potentially unplayable bat.

The disappointing thing for Padres fans is just how little of the real future they’re likely to see this year. We rated the Padres third in our organizational rankings this offseason, and the system is certainly deep. Margot, Renfroe, and Hedges are already up with the big-league club, but the rest of the reinforcements are much further out. Anderson Espinoza and Cal Quantrill are a few years away, as are guys like left-hander Adrian Morejon and the rest of the peck of international amateur free agents San Diego spent almost $80 million on in the 2016-2017 signing period.

How effective they will be when they get there is still an open question. But we can probably wager that rumors of their progress or failure will be part of the narrative for the 2017 Padres. We’ll watch Margot’s bat with rapt attention, and hope the best for Hedges, and wonder how a bunch of 17-year-olds will fit in with the glimpses we see at Petco Park. This is the battle. This is creation. It’s how you justify making your team and your fans live in the trenches. So that when the reinforcements get there, and we start to think of individual Padres seasons and not The Bad Years, we actually have something to remember.

There is always a chance A.J. Preller decides to become a traveling pastor and takes several of the current Padres with him. They remain the Padres by name, but sing more songs.

The disappointing thing about this 2017 Padres team is that they've taken away disappointment. There's nothing to hang your hat on. A 20-20 Wil Myers season that's lost to the ether? Ryan Schimpf being a real person? The start of Manuel Margot? It might all come to pass or it might not, but no one will remember either way. They'll just miss the Chargers. But that’s OK. The battle isn’t a fight against disappointment. It’s a battle for creation.

Special thanks to Rob McQuown for the research assistance.

[1] I propose that we refer to Chacin as Opening Day Starter Jhoulys Chacin for the rest of the year. ODS Chacin is also acceptable. One can only imagine how the famously calm Weaver, the veteran on the staff and a Cy Young runner-up, felt about being passed over for ODS Chacin.

[2] This WARP includes all pitchers who started, with the percentage of their seasonal WARP equal to their IP_START/IP.

You need to be logged in to comment. Login or Subscribe
earlweaver
Dick Enberg got out just in time.
Reply to earlweaver
LynchMob
We love them, we will always love them. It's another day of sun ...
Reply to LynchMob
mattsussman
I don't appreciate the presumption that we have to refer to Jhoulys Chacin later on in the season
Reply to mattsussman
megrowler
Hell is other people and the Padres rotation
Reply to megrowler
boatman44
Maybe they do a movie about them "Major League2"
Reply to boatman44
boatman44
Alexander Dreymon can play Weaver:)
Reply to boatman44