On Monday, I introduced a new made-up statistic, the Change Index, to estimate how much each National League team’s hitters and pitchers are turning over. You can read all the details here, but to give you a précis, I compared actual 2016 plate appearances and innings pitched to the projections in the BP depth charts. I added the absolute values of every change (reductions in playing time and additions to playing time) and divided the result by two to get the mean. Then I calculated a Change Index equal to the change in plate appearances, plus 3.5 times the change in innings pitched, all divided by 50.

Again, you can click the link to see exactly how this calculation works and why I chose 3.5 for the pitching weight. But I do want to reiterate a caveat: Don’t take this too seriously. These numbers are highly speculative. Our playing time projections don’t anticipate unexpected injuries, or ineffectiveness, or improved play, or trades. We don’t even know all the 25-man rosters yet. (Projected depth charts used here are as of mid-day, March 29.) Nothing’s finalized, and even when it is, it’s only a guess.

As you’re reading this, somebody is getting sent down to the minors or straining an oblique or getting moved up or down the batting order, all of which will affect his playing time. The changes we’re projecting should, in general, hold true—the Rangers will definitely have to replace all 503 of Mitch Moreland’s 2016 plate appearances, and our projection of 557 plate appearances for Mike Napoli is as good a guess as any as to how—but this is mostly guesswork, if informed guesswork.

Here are the projected changes in hitter plate appearances and pitcher innings for the American League, along with each team’s Change Index. 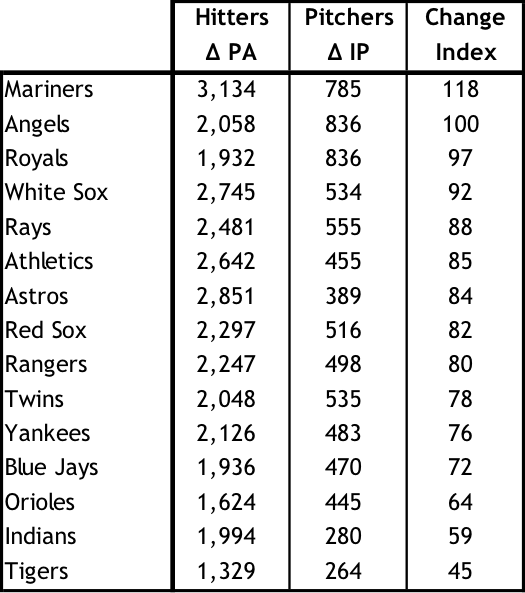 What did Jerry Dipoto do? This offseason, the Mariners and their frenzied general manager, Jerry Dipoto, dominated the transaction log so much that our award-winning author Meg Rowley was on The Ringer MLB Show podcast, hosted by our former BP colleagues Ben Lindbergh and Michael Baumann, twice to break down Seattle’s roster moves, prompting Baumann to pen an ode (go to the 54:29 mark).

Seattle leads the majors in hitter turnover and is fourth in pitcher turnover, resulting in the highest Change Index in baseball. That’s what Jerry Dipoto did.

Tigers stand their ground: Detroit is the mirror image of the Mariners: No team in the majors has less projected turnover in 2017. The most prominent departure is that of Cameron Maybin, who started 89 games in center field last year. We project every Tigers pitcher with 10 or more innings in 2016 to appear for the club this year with the lone exception of Mark Lowe, who had a 7.11 ERA in 49 1/3 innings. Every season is portrayed as one last hurrah for this franchise. This season’s shaping up as yet another one of those.

Astros offense: Major overhauls are usually signs of a rebuild. The Padres lead the National League in projected change in both plate appearances and innings. The Brewers and Diamondbacks follow on offense, the Braves and Reds on the mound. But in the American League, trailing only Dipoto’s Mariners, the West division favorite Astros are second in projected hitter turnover.

Brian McCann (595 projected plate appearances), Carlos Beltran (535), Josh Reddick (518), and Nori Aoki (421) are the most prominent additions; Colby Rasmus (417 2016 plate appearances), Jason Castro (376), Luis Valbeuna (342), and Carlos Gomez (323) the biggest subtractions; while Yulieski Gurriel (398 more projected plate appearances than in 2016), Alex Bregman (334 more), Evan Gattis (257 fewer), and Marwin Gonzalez (239 fewer) look to play different roles. The biggest concern about the Astros is on the mound, but the biggest changes are with the bat.

Royals and Angels pitching staffs: As noted above, the Padres, Braves, and Reds have the highest projected pitching turnover in the National League. But they don’t lead the majors. That title goes to Kansas City and Los Angeles. In 2017, we project the 21 Royals pitchers who combined for 1,440 innings last season to pitch only 832 innings—turnover of more than 42 percent, with only 10 of the 21 appearing on the mound for he club.

Yeah, yeah. I know. The DH: The figures posted here for hitter turnover count only non-pitcher plate appearances. That gives the American League an advantage, as it were, in that there are more potential plate appearances to change per team than in the National League. So when comparing teams between the leagues, I should do some sort adjustment to the American League figures. But I didn’t, for three reasons.

First, and most importantly, the difference isn’t that large. Non-pitchers had fewer than four percent more plate appearances in the AL than the NL. Yes, the pitcher accounts for one of nine lineup spots in the NL, but they bat eighth or (more commonly) ninth in the order, which affords them fewer plate appearances. And those appearances are often swiped by a position player anyway, via pinch-hitting or a double-switch.

Second, it really doesn’t change much that I’ve listed here. Specifically, for the Mariners, the designated hitter—mostly Nelson Cruz—is one of the few positions that isn’t changing for the club. And assigning a lower weight to AL hitters would make the stasis of the Tigers, Indians, and Orioles even more extreme. Third, who cares? This is an incredibly imprecise exercise. Any attempt to introduce precision is silly.

As noted, nothing in this report will come true exactly as the numbers above portend. But you can be sure that casual Mariners fans will have a much harder time figuring out who these guys are than those heading over to Comerica Park.

Enter the Volgelsong Awards Contest! Pick the best players who didn’t appear in this year’s Baseball Prospectus Annual. Details (along with a link to all 2,077 players who are in the Annual) here.

I'd be interested in seeing how the Mariners' projection compares to the all-time Change Index teams.
Reply to bornyank1
megrowler
The third time was what sealed the song in forever.
Reply to megrowler
mainsr
Hey Ben, I checked with the source and you are, of course right. As a listener to the podcast, there was a lot of Dipoto over the winter! (Which, of course, mirrors reality.)

As for seeing how the Mariners compare to other teams...SHHHH. I'm trying to put dibs on that research for myself.
Reply to mainsr
mainsr
(oops, and I see the source posted faster than I)
Reply to mainsr
timber
Travis Wood will not be in the Royals rotation, at least not to start the season. The rotation will be Danny Duffy, Ian Kennedy, Jason Hammel, Jason Vargas, and Nate Karns. I don't know if that changes your numbers any.
Reply to timber
mainsr
Thanks, Timber. Actually, our playing time estimates were updated recently to give Wood credit for just 11 starts and 94 innings, so I caught that. (My first draft of this had assumed a larger role for him.) We do have Duffy, Kennedy, Hammel, Vargas, and Karns as the top five. I included Wood because (1) he will likely be starting some games (11 if we're right!) and (2) his addition was pretty clearly a result of Ventura's passing.
Reply to mainsr