On March 18, White Sox manager Rick Renteria was ejected from a Cactus League game against the Los Angeles Dodgers by umpire Quinn Wolcott. Five days later, his right fielder Avisail Garcia was ejected by Mike Winters, and Renteria ran out for a…chat, but managed to stay in the game. Or failed to leave it, by our standards here.

Based on a frustratingly long stretch of googling and a shockingly detailed dataset from a site called the Umpire Ejection Fantasy League, Renteria is the only manager ejected from spring training action since 2015. Two ejections in one spring would give him unprecedented dominance of the statistical category, but the question nags: would it project to the regular season?

No. Of course not. The discrete nature of the event of a managerial ejection combined with the unique circumstances/uncompetitive focus/undiluted nihilism of spring produces a lot of fluky results. 10 separate managers were all ejected one time each from 2012-2015, but even in the bloodbath of 2015, when Lloyd McClendon, Clint Hurdle, Chip Hale and Fredi Gonzalez all got run, not a one of them turned around a delivered a standout season in terms of irretrievably disagreeable disagreements.

Only one skipper’s spring spree of sour symposiums presaged an inordinately incorrigible season: Ron Roenicke in 2014.

An AP report of Roenicke’s spring ejection at the hands of Bill Miller, a curious happening since Miller was the second base umpire and Roenicke was disputing a play at the plate, noted the incident was a break from his normally mild-mannered nature. But a quote from Roenicke clearly showed a man who saw injustice, and was reconsidering whether he was willing to tolerate it any longer.

Roenicke is the owner of 10 career ejections, but half of them came after his spring encounter, four in 2014, and one more in the 25 game he managed in 2015 before he was fired due to a 7-18 start. By late-August 2014, leading a once-promising Brewers club in full freefall, fill-in Triple-A umpire Mark Ripperger found himself face-to-face with a man that had been fully radicalized.

“I should have been kicked out the last time we saw him. I'm tired of sitting here and watching the catchers set up off the plate and he calls it a strike and they're balls."

We look for statistical indicators to project future performance a lot around these parts, and often wind up being late on a stirring change of a player’s nature, that has occurred not gradually, but through a realization. And a realization can be as simple as seeing something differently, whether it’s when major league pitching begins to slow down, a recommended mechanical tweak suddenly feels natural, or the wheels of power–and how they merely exist to crush the powerless with no consideration of justice or merit–becoming fully visible.

Statistically, we cannot conclude Renteria is destined for a summer of spats and ejections based on one spring incident. But every once in awhile, a small happening is a great beginning.

Eff All of You, Love, Chase Utley

Sometimes I wonder how baseball players feel about being the canvas for poor athletes with graduate degrees to paint our masterpieces on. Few of them truly care, I imagine. What is being the focal point of Victorian-inspired fanfic, or the cornerstone of society’s many injustices for us to hammer away at, when glory and wealth are one sweet swing away? 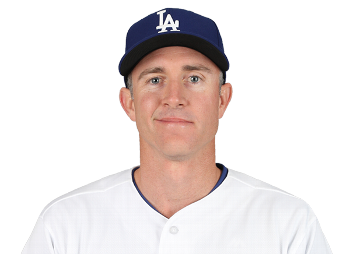 It’s the smirk, I think. It’s perfect. After fourteen years in the major leagues, 250 home runs, a World Series, a career establishing him as a surefire should-be Hall of Famer, Chase Utley’s response is to look at the camera, and smirk.

He knows. He knows the way he plays bothers us. It’s purposeful, practiced, rehearsed, although not for our benefit. Every single thing Chase Utley has ever done on a baseball field is designed to, however microscopically, increase his advantage, and/or his opponent’s disadvantage.

More than this style, however, I think what truly rankles baseball’s enlightened is how many revere it. Phrases like “old school ballplayer”, “throwback”, “how they played when I was growing up”, are common when Chase Utley is the topic. If there’s anything modern baseball fans resent, it’s the idea that the game was somehow better in the past, before being freed of its luddite shackles, and allowed to grow and evolve into its current, progressive form. Baseball was not better, the game has evolved, and using your face as a torpedo and Ruben Tejada’s legs as a slow-moving shipping boat must be legislated from the game.

I wouldn’t claim to know who’s correct in all this, if correct even exists. The tides of change ebb and flow regardless of my feelings. But yesterday I think we got a good glimpse into how Chase Utley handles it all.

After his first career home run, a grand slam off of Aaron Cook, John Kruk told Utley that his “papers had not been filed properly” and thus the home run wouldn’t count. Utley, always equal parts aware and intolerant of outside distractions, simply uttered “eff all of you”, and left. I’d like to think he smirked.

As you wade into each day’s social thunderdome, I encourage you to remember that smirk, and when it all begins to overwhelm you, I hope you find your own “eff all of you”. After all, if there’s one lesson we can draw from Chase Utley, there’s work to be done, and opponents to disadvantage.

Man Versus Self: The JaCoby Jones Story

It’s very possible that by this stage in your life you are aware of Chip Caray’s little misunderstanding regarding the identity of Tigers center fielder (and non-football player) JaCoby Jones. While most of the attention regarding the mishap has been directed toward Caray’s lack of preparation, another element deserves consideration: how messed up it is that this was even possible. To study the situation further, I turned to the author’s favorite tool, the Highly Scientific Twitter Poll. 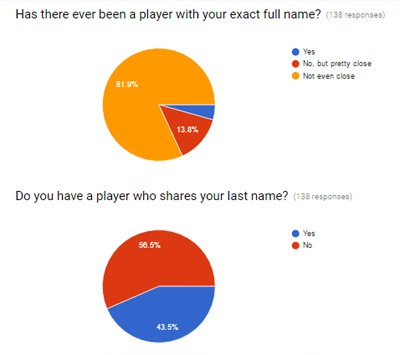 Less than one in five respondents shared an exact full-name match with a baseball player, and less than half even shared a last name. Given that the sport has existed for hundreds of years and played by thousands of teams, it’s almost surprising how rare name matches are: two players, for example, have born the name John Smith; they combined for 228 plate appearances and the younger last played almost ninety years ago.

But there’s more to think about than just our dual-Jacoby existence. The real question: how does Jones feel, not about Caray specifically, but about his having a doppelganger at all? Poll results of Average Folk, by proxy, offer little evidence: 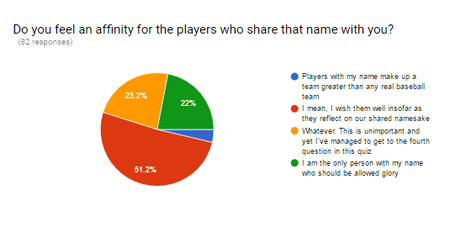 I asked for an explanation for their relationship with their namesakes. The following is a sample of the responses. It’s quite a range.

In the end, I cannot speak for JaCoby Jones. But as for myself: I do not understand 78% of people. When it comes to names, I am firmly on the side of Team Highlander: There can be only one. A name is something to which I’ve attached every value, every A- middle school English paper, every love poem and hand-outline turkey I’ve ever created. There are two other Patrick Dubuques in the world, drawing their own, inferior turkeys, and I will, to the best of my ability, destroy them.

So when JaCoby Jones gets mistaken for Jacoby Jones, it’s more than just an embarrassing mistake; it’s an active dilution of his whole identity. There’s a one-in-four chance that Chip Caray opened some old wounds, and forced the young player to compare himself, involuntarily, to the Jones that came before him. Or perhaps this is just a little more tinder to add to the fire in Jones’ heart, pushing him to be the greatest JaCoby Jones the world has ever seen. We’ll never know, because we’ll never bother to ask.

You need to be logged in to comment. Login or Subscribe
jfranco77
I've been blessed to share my last name with a lot of awesome baseball players. My exact namesake, John Franco, was not only a good dude but a massive local hero for the Mets when I still lived on Long Island. And a native New Yorker like me. I met him at a baseball card show and he was a cool guy. I have a baseball card signed "to John Franco, from John Franco."

And wayward beer league player Matt Franco (also a Met, actually on the same team as John for a few years.) Kurt Russell's nephew (good) but named in the Mitchell Report (bad).

There's also Julio Franco, who played until he was 50. And ALSO played for the Mets.

And current major leaguer Maikel Franco, who my daughter affectionately refers to as "Cousin Maikel." Somehow he hasn't played for the Mets yet, but it's early.
Reply to jfranco77