Every season necessarily brings with it change. Players become old and ineffective and are replaced by promising rookies. The injured get healthy and the healthy get injured. Some players exit via trade, waiver, and release, and some arrive by the same routes. Turnover is inevitable.

Take, for example, Your World Champion Chicago Cubs. Good team, right? Won 103 games in the regular season, and then another 11 in the postseason. That’s a team that’s hardly a candidate for hitting the reset button. Yet, comparing the team’s actual 2016 results with our playing time projections, there are some significant changes: 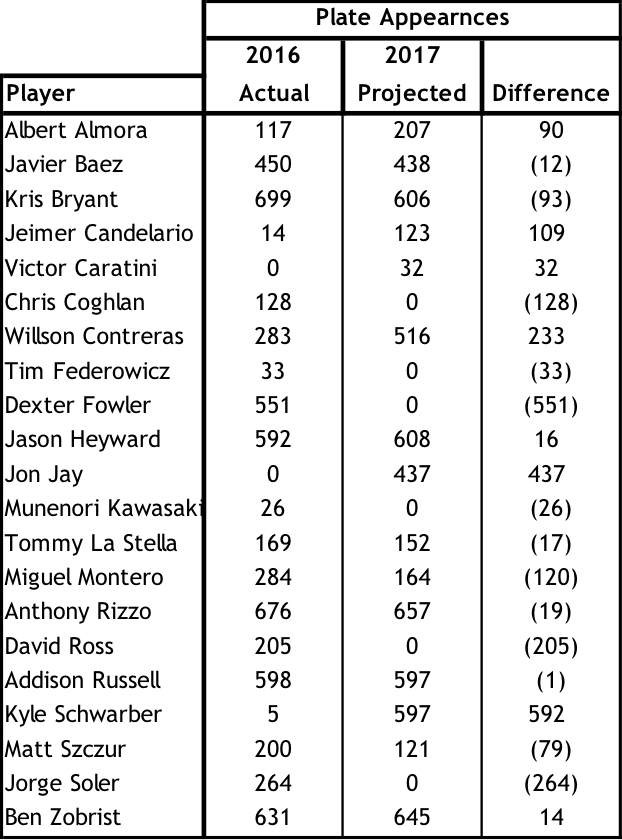 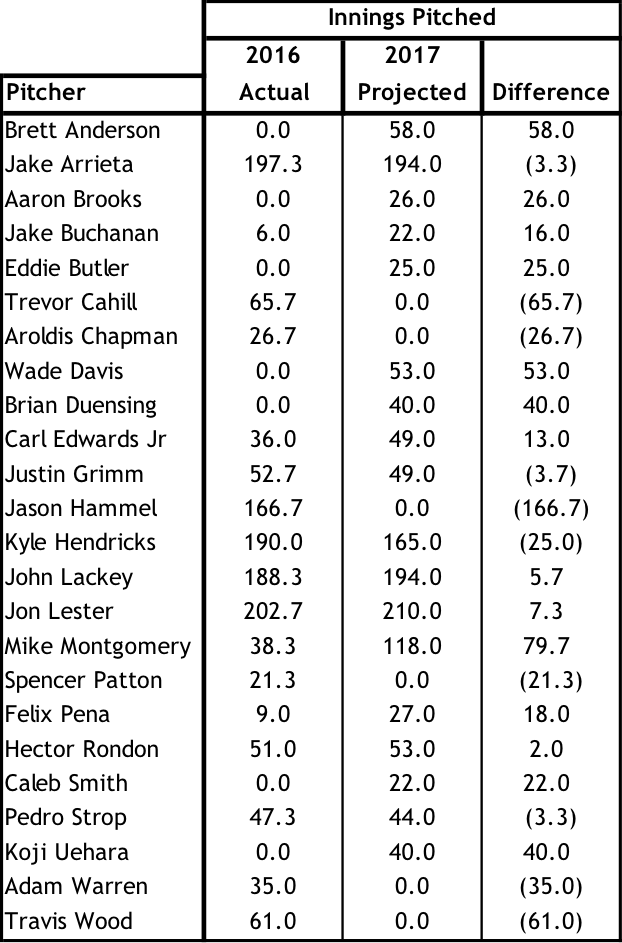 Most of the change here is departures and additions. Say goodbye to Jason Hammel, Trevor Cahill, and Travis Wood and hello to Brett Anderson, Wade Davis, Brian Duensing and Koji Uehara.

So, the defending champions are turning over more than a quarter of their plate appearances and almost two out of every seven innings pitched. Isn’t that a lot of change?

Actually, it’s not. The following table has four columns. The first is the 15 National League teams. The second is the change in plate appearances for their hitters, based on actual 2016 figures for non-pitchers and our depth chart projections as of March 25. The third is the change in innings. (The triangle symbol, for those of you who slept through your math courses, is an upper-case Greek letter delta, signifying change in).

As I said, we project the Cubs to turn over 28 percent of their innings this year. But it’s not going to look like a lot of change. Four-fifths of the rotation—Jon Lester, Jake Arrieta, Kyle Hendricks, John Lackey—is the same. Five of the seven relievers who pitched more than 35 innings are back, too. The change on the mound isn’t as stark as seeing Jon Jay and Albert Almora in center field instead of Dexter Fowler, and Contreras displacing Montero and David Ross as the primary catcher. So I dialed down the pitching component a bit. If you want to use different weights, feel free! I’m giving you all the data. 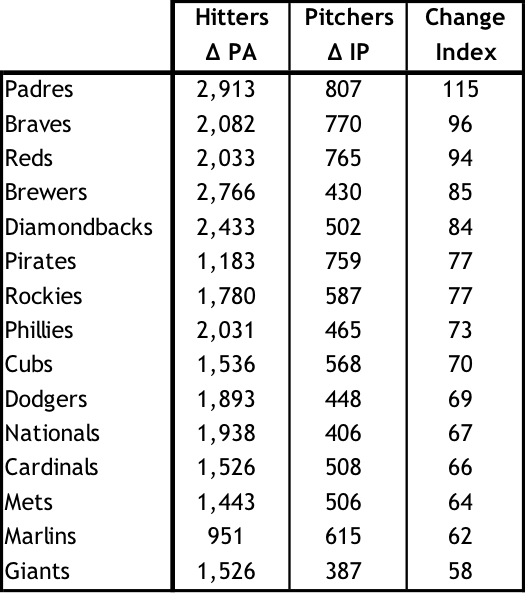 Keep in mind that this is highly speculative. Our depth charts don’t anticipate unexpected injuries, or ineffectiveness, or improved play, or trades. We don’t even know 25-man rosters yet. Nothing’s finalized, and even when it is, it’s only a guess. So don’t take any of the numbers here too seriously. The difference between the 1,893 Dodgers plate appearances and 1,938 Nationals plate appearances that we expect to turn over is meaningless.

Padres (again!) pitching staff: We’re projecting more change on both sides of the ball for San Diego than any other National League team. This, again, points to their rebuild. The club added Jered Weaver (160 projected 2017 innings), Jhoulys Chacin (144), and Trevor Cahill (137) over the winter, providing the bulk of the change. Colin Rea, who pitched 99.1 innings in 2016, is out for the year following Tommy John surgery, and the Padres traded James Shields (67.1 innings) and allowed Edwin Jackson and Andrew Cashner (152.2 combined) to depart via free agency. The 2017 Padres may not be better, but they’ll be different!

Braves, Reds, and Pirates pitching staffs: Two of these clubs are rebuilding. The Reds had the third-worst ERA and DRA and the worst FIP in the National League last year. The Braves, while better, brought in Bartolo Colon (174 projected 2017 innings), R.A. Dickey (156), and Jaime Garcia (137) to eat innings while the top-ranked farm system develops its formidable crop of young pitchers.

Marlins lineup: No team in the National League (nor, for that matter, in the American League) is maintaining its starting eight the way Miami is. Last year’s club featured J.T. Realmuto behind the plate, Justin Bour at first, Dee Gordon at second, Martin Prado at third, Adeiny Hechavarria at short, and Christian Yelich, Marcell Ozuna, and Giancarlo Stanton from left to right in the outfield. So will this year’s. The biggest change we project? An additional 294 plate appearances for Gordon, who will presumably not be suspended for PED use.

Giants pitching staff: The Giants aren’t sticking with their 2016 pitchers much more than the Nationals and Brewers. But then, the Nationals and Brewers didn’t come close to setting a record for the biggest decline in winning percentage from the first half of the season to the second. Despite the team’s descent from the best record in baseball at the All-Star break, the Giants are not tearing down the offense (tied with St. Louis for the fifth-lowest projected change in plate appearances) or, especially, the pitching staff (lowest projected change in innings pitched). The aforementioned Melancon will replace 2016 bullpen scapegoats Santiago Casilla, Sergio Romo, and Javier Lopez, but we project only 56 innings for Melancon, replacing the 115.1 that Casilla, Romo, and Lopez collectively threw. The largest changes we expect are 79.2 additional Matt Moore innings, helping replace Jake Peavy’s 118.2.

The takeaway here, I think, is that there are probably more changes to major-league rosters from season to season than we realize. And that’s based just on the National League. Later this week I’ll give you the numbers for the American League. They’re more extreme! How’s that for a tease?

Enter the Volgelsong Awards Contest! Pick the best players who didn’t appear in this year’s Baseball Prospectus Annual. Details (along with a link to all 2,077 players who are in the Annual) here.

You need to be logged in to comment. Login or Subscribe
maphal
Can the Cubs get close to 30 starts from their top 5 pitchers again?
Reply to maphal
mainsr
In theory, of course, yes. PECOTA projects 30 from Lackey and 29 each from Arrieta, Lester, and Hendricks. Just getting that from those four would be pretty good.
Reply to mainsr
collins
It would be interesting to see how much turnover there has been from year to year, for each team.
Reply to collins