Playing for a voluntarily terrible team makes it hard to cash in star-caliber performance for the full star treatment a player deserves. That’s why, if you failed to look closely enough, Braves first baseman Freddie Freeman might have slipped his graduation into true superstardom right under your nose last season. Don’t feel bad; he even has PECOTA fooled.

PECOTA doesn’t care that Freeman is a Brave, of course. It just doesn’t know what to do with him. Last year was Freeman’s sixth in the big leagues. He’d established a level. Suddenly, he seems to have taken his game to a wholly new level. Let's talk about how he did it and what we can learn from that.

Back In January, Rob Mains wrote a series here on hitters’ apparent 2016 New Year’s resolutions—essentially, digging into various changes in approach that players might have made, which players most consistently managed to stick to those changes, and how they panned out. Freeman figured semi-prominently in one installment of the series, because he went the other way substantially more often in 2016 than he had the season before.

In Freeman’s case, that’s noteworthy and helpful. Most hitters profit from pulling the ball more, but with his huge frame and natural loft, Freeman did well to take a short path to outside pitches. His peculiar swing pattern sometimes makes it look like he’s just fighting off a high fastball—then, alarmingly, the ball carries all the way out of the park to left-center field.

What caught my eye, though, was a different change Freeman made (or finalized) in 2016. For his New Year’s resolutions piece on plate discipline, Mains created an index by which to roughly measure a player’s eye for the strike zone: swing rate in the zone minus swing rate outside the zone. Freeman rated highly in it, but not by being especially patient. Rather, he got near the top of that leaderboard through extraordinary aggressiveness, unusually well concentrated within the zone.

In the non-Orioles division, no one allowed fewer strikes to go by than did Freeman last season. No one with similar aggressiveness within the zone was quite as discerning on pitches outside it, either. Even that, though, might not tell the full story of Freeman’s approach, which is approaching perfection. Here are Freeman’s swing rates by specific pitch location for the last two years: 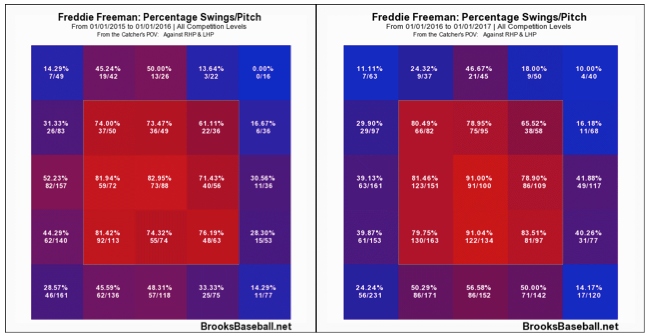 Of the nine squares representing the strike zone, the only two in which Freeman didn’t raise his swing rate last season were the middle and lowest ones on the outer third of the plate. He so reliably swung at every hitter’s pitch he saw that according to StatCorner, when he did take a pitch within the zone, it was still called a ball 23.3 percent of the time. No batter who saw 1,600 or more pitches last season could match that figure, which should come as no surprise.

Freeman’s swing is extremely powerful and short, but swinging so much does come at a cost. Last season, the slugger made contact on 70.5 percent of his swings, a rate lower than all but 12 of the aforementioned 133 qualifiers. But "lower” is not always synonymous with “worse” where contact rate is concerned. Freeman hit the ball slightly harder last season than in 2015 (91.7 miles per hour in average exit velocity, up from 91.1), and got the ball in the air markedly better (17.3 degrees was his average launch angle, up from 14.2 degrees).

If he traded contact on a couple swings out of every 100, he more than made up for that, not only by producing more value when he did connect, but by forcing pitchers to work him more carefully, and by not rewarding them for that. Freeman walked at a career-high rate last year, in addition to hitting for new, overwhelming power. That he struck out considerably more often than he ever had didn’t hold Freeman back in the slightest.

The best plate approach in baseball is not any one approach. There’s a best approach for every individual, and many guys never quite find theirs. Freeman seems to be one of those who have done it. There’s an even smaller fraternity of batters who have fully optimized their approach and taken that approach to an extreme that redoubles the value thereof. PECOTA isn’t yet able to see it, or else doesn’t fully believe it, but it seems as though Freeman is stepping into that circle, as well. The best approach, for that person, might belong to Mike Trout, or to Miguel Cabrera, or to Jose Bautista. But it just might belong to Freeman.