The Phone Rings at the Ian Kinsler Institute of Baseball Etiquette

“Hello, and thank you for calling the Ian Kinsler Institute of Baseball Etiquette. How may I help you?

“Certainly, ma’am. I’d be happy to answer any questions you may have.

“Well, yes and no. We don’t teach the technical baseball skills, per se. But we work hard with our students to instill in them the proper skills to be a … well, a courteous baseball player.

“No ma’am, your child won’t need to bring any baseball equipment. Again, this is an etiquette institute. They only need to bring the required permission forms and an openness to learn the right way to behave on a baseball field.

“And I’m sure your little one is a fine catcher, ma’am. But the only positions we care about at I.K.I.B.E. are the dispositions of even-headed baseball players.

“What do I mean? Well, I’m sure you watch a lot of baseball with your child, yes? Sure. And you know how some of the players on the field have a penchant for … carrying on? Oh, you know, some players who … perhaps weren’t born in the country tend to act in an uncouth way — flipping bats, celebrating strikeouts, pointing… bringing a level of emotion to the game that doesn’t really belong in baseball. We teach our students how to compose themselves and also how to let other players know when they’re acting inappropriately.

“There’s a right way and a wrong way to play the game, and we here at the Ian Kinsler Institute of Baseball Etiquette want to make sure we are teaching the right way.

“We know that life is such a tremendous burden that we are often tempted to react to extraordinary events with emotions — be it cheering, clapping, crying, squinting thoughtfully, et cetera. It’s a perfectly natural human response, but one that has no place on a big grass field where a game is being played. Just like how video games and popular music and smartphone apps are teaching our children bad values, we feel that watching professionals play baseball in an overly-flashy way can give youngsters the wrong idea and lead them down an improper path.

“There is a $200 deposit to reserve a spot with the remainder due when the student arrives at camp. Cash, check, Visa or Mastercard. Does your child have any dietary restrictions?

Spring: A Time to TOOTBLAN

Justin Ruggiano popped out of his slide, turned his head and saw the ball scamper into short right field. With nobody ahead of him, he bolted for third with great haste. Alas, the gamble didn’t pay off, as a strong and accurate throw from Avisail Garcia beat Ruggiano’s foot to the bag by a hair. The crowd tsked lightly in disappointment.

On the one hand, this was bad baseball: outs are scarce, and making them on the bases is often embarrassing. On the other, a close call on the bases is one of the most exciting plays in baseball and Ruggiano simply did his part to liven up the proceedings. His efforts should be celebrated, all the more so in today’s environment, where the bang-bang play is under attack like never before.

Moneyball has become common shorthand for the analytical revolution that upended and repackaged decades of conventional baseball wisdom. While not part of the lexicon, efficiencyball might actually be a more descriptive moniker. Distilled to its essence, the influx of statistics and analytical tools into the sport has pushed baseball teams to find ever more efficient tactics for scoring and preventing runs.

In many ways, this is good. To our collective benefit, teams now know better which offensive, defensive, and pitching traits lead to winning baseball. A world where teams prefer Joey Votto to Steve Garvey and Felix Hernandez to Bob Welch is a better place to sleep at night.

But efficiencyball is inherently pragmatic; it cannot be seduced by excitement. In today’s hyper-efficient brand of baseball, where home runs account for a historically disproportionate share of offensive production, there’s little value and considerable downside to running cavalierly. It’s hard to justify trying to leg out a double when the guy on deck is going to strike out or homer anyway.

Replay threatens the brazen baserunner further: How many times have we seen a player called out when his foot drifts off the base for a fraction of a second after he slid in safely? Remember also that some of the excitement in close plays at the plate has recently been legislated out of the game. None of these developments encourage bold baserunning.

This is not to lament statistical analysis, or the fruit it has borne. There is, however, a tradeoff baked into efficiencyball, and we shouldn’t pretend that we haven’t made it. After all, no good fan wants to see their left fielder saunter off of second base because it’s fun: teams are trying to win and should seek to play as efficiently as possible from April through October.

But whatever the merits of efficiencyball, an exciting play triumphs on its own merit. Hold everything else constant, and a game with fewer close calls on the bases is inherently worse than one with more. Even now, spring training provides the only haven from the TOOTBLAN. Freed from the shackles of Meaningful Baseball for a month, ballplayers can let their instincts run amok with impunity. So go for glory, Justin. Test your limits, feel your oats, turn efficiencyball into a game of pickle, and indulge in the joyous, primitive impulse to take the extra base.

Pitching in Denver is hard. So hard, in fact, that one might choose to amend the “history of the Colorado Rockies” Wikipedia page to read something like this:

“The Rockies began play in 1993 in the National League West. Only three Rockies pitchers have received Cy Young votes because pitching in Denver is a hellish fever dream of flat breaking balls and cricks in your neck.”

Two of the pitchers to have received Cy Young award votes are fairly obvious, and fairly recent. Ubaldo Jimenez garnered 90 points and a third-place finish in 2010; Jeff Francis got a single point in 2007. The last guy is the one I want to talk about today, though. In 1994, Marvin Freeman received four points in the NL Cy Young vote, tied for fourth place with Doug Drabek in a year in which Greg Maddux ran away with his third of four consecutive awards. It was the lone bright spot in an otherwise bizarre career. 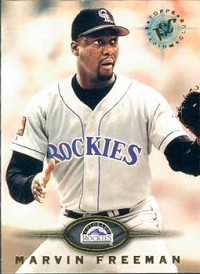 Freeman debuted in 1986, and started 11 games at age 25 for the very bad Phillies in 1988. He started a few games between ‘86-’93, but mostly appeared in middle relief, and then less than memorably.. In 1994, though, a David Nied-led Rockies team decided to pick him up and try starting him again, in their second season of existence.

Somehow, Freeman figured out how to pitch at Mile High Stadium. After his first two starts, Freeman surrendered no more than three earned runs in a start, and he posted 14 quality starts in his last 17 appearances. He was equally good at Mile High as he was on the road, with 49.2 innings of 2.90 ERA ball at home.

With August came the players’ strike, however. Freeman’s last start occurred on August 8, four days before the strike began. He wouldn’t recover his form, hanging on for two more disastrous seasons as a starter before exiting the game for good.

Remarkably, Freeman threw no more than seven innings in any start in his 1994 season. In 78 career starts, he only threw more than seven full innings once (a 1996 start at Coors Field in which he blew a 5-1 lead in the ninth). His 593.2 innings are a historical footnote: only three pitchers who have received Cy Young votes—excepting relievers and active pitchers—have thrown fewer innings. Mark Fidrych finished with 412.1 after injuries derailed his promising career, Buzz Capra (like Freeman, a Chicago-born player) tallied 544.1, and Jose Fernandez ended his brief but bright career with 471.1.

For those estranged from their long-sought goals, the heft of failure rarely departs; to yoke one’s psychological welfare to something like a Cy Young is condemning oneself to the fate of Tantalus. I don’t know how Freeman feels about the unceremonious end to his career, so quickly after years of mediocrity finally relented. What happens to a Cy Young deferred? Like a curve that doesn’t break in the too-thin air, it explodes.

You need to be logged in to comment. Login or Subscribe
tnt9357
Oh look, he clarified that there is no "wrong way". But by all means let's make him the anti-Rich Hill: