Scott Dourque And The Resistance Of Memory

Scott Dourque sat alone on the slightly stained couch in the nondescript beige living room of his rented Arizona apartment on Sunday night, still clutching the tv remote hours after Team USA walloped his beloved Canada 8-0 to knock them out of the World Baseball Classic. He had always dreamed of playing for his country, but time and again he was denied. Though he had amassed a magnificent career with the Padres, hitting 42 home runs four seasons in a row with an average of .342 each season, he never mastered the art of making an impression.

Growing up as the middle of five children, Scott had often been forgotten by his parents. He began playing baseball at the age of four, while his two older brothers chose hockey. Every Christmas, Scott asked for a new bat or a new glove, but instead received a new hockey stick or pair of skates. And every time he signed up for a team, he invariably received jackets and jerseys that proudly displayed the name “Bourque”. He never wanted to appear overly difficult, so he lived with the mistake. From t-ball to midget, Scott Dourque did not exist.

This issue climaxed during the 2009 MLB draft. Talented enough to go in the first round, Dourque fell to the San Diego Padres in round 12. Though several teams were impressed by his stats–or rather, Scott Bourque’s–they only vaguely recollected the man himself, unsure whether he was an actual player or a video game stand-in.

Nonetheless, Scott made his way through the minors in remarkable time and found himself in The Show on July 18, 2011. Finally sporting a jersey that read “Dourque,” Scott thought his life as a fata mirage has ended. And when he hit the game-winning home run, he knew it would be shown everywhere. Following the game, he rushed home to see what kind of praise the internet was heaping upon him. Instead, he found a barrage of cheap jokes about how the Padres are a fake team and “Scott Dourque” is a fake name, an aberration of the dependable baseball player Scott Bourque. Determined to end these jokes, Dourque became one of the best players in baseball over the next five seasons.

After putting together a stellar 2016 season that garnered him zero MVP votes, Scott decided to be proactive for once. Determined to make a name for himself somewhere, he called Team Canada to pitch himself for the WBC, thinking he would be a shoo-in on a somewhat weak roster. However, he only reached voicemail. They never called him back.

Dorque cried himself to sleep following Canada’s elimination. He dreamed of winning the tournament, crowds chanting his name–“Dourque! Dourque! Dourque!”–wherever he went. In his dreams, he was a hero. Sadly, he never remembered his dreams.

Maybe one day, after teams forget to sign him during free agency, his career will take him to Japan, where he already has captured the hearts of many a video game player. But were fate so kind, he would have received at least one bat for Christmas.

fighting baseball for super famicom. some japanese guy had to come up with a whole league of fake american names pic.twitter.com/4lwzoBpg9f

L of a Way to Win

When you think of a victory, you often think of something with a little more fanfare at the end: you could hear Kool and the Gang, see some high fives, or maybe admire some fireworks.

The 21st century is a little bit different, in that a victory could be a dunk on social media,celebrated with the like button. Or, if you’re really victorious, the retweet button. The Oakland Athletics have finished in the cellar of the American League West the last two seasons, and it doesn’t seem that it could be changing any time soon.

The solution to boost some kind morale a bit?

You dunk on the Mariners. 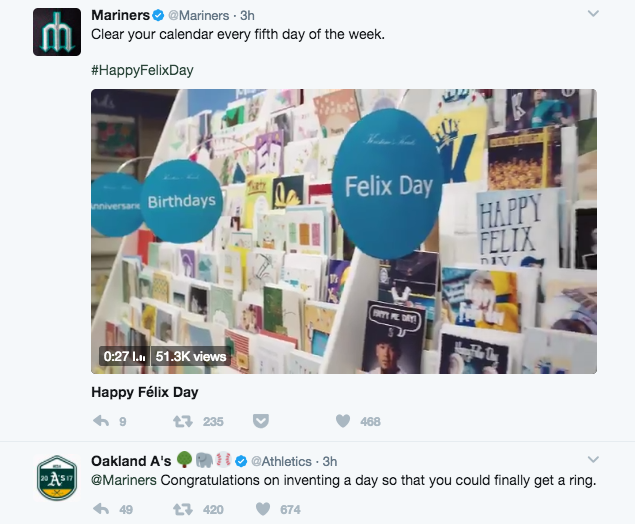 You get people’s attention when you beef on twitter, as the young kids call it these days. You get people going all the way to Temecula to fight a stranger on the internet about Kobe Bryant, so why wouldn’t you want to create a kerfuffle with a division rival?

The 2016 American League West saw the Seattle Mariners unexpectedly rise to second in the division, with a final W-L of 86-76, while the Athletics sunk to the bottom once again at 69-93. 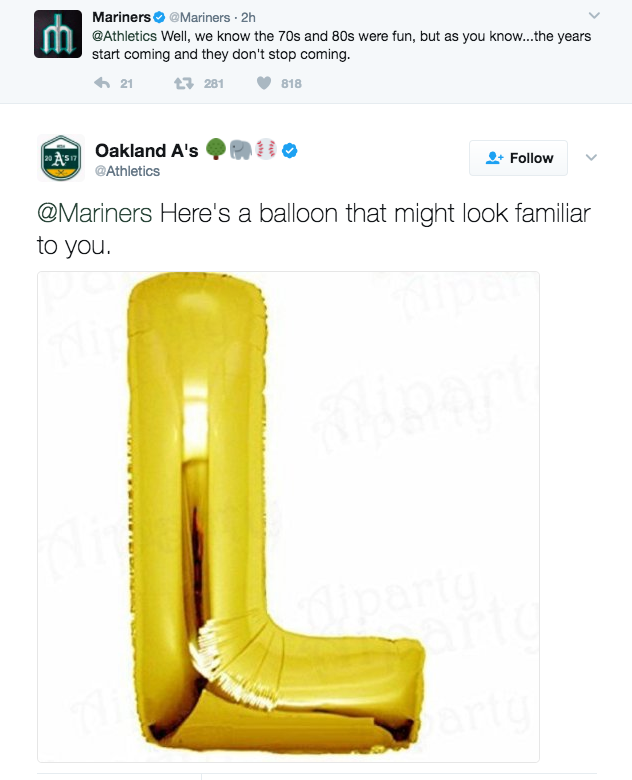 These twitter beefs have no real consequence, since they don’t translate to victories on the field, nor does it really have a prolonged sense of superiority. But dang it if it doesn’t feel good in the moment.

The low bar of small victories these days doesn’t take much to clear. You don’t even have to do much but “own” any moving target. You don’t really remember these victories that well, if at all, and maybe that might apply to the Athletics, too.

Last year Baseball-Reference ruefully shut down one of its quaintest features: sponsored pages. Initially one of their biggest sources of cash, they just said it wasn’t bringing in the money it used to, which we can understand, because Outbrain’s chumboxes are way more eclectic. B-R left up their last sponsor as a legacy bar, a fitting elegy to loyal fans who said “I like this page so much I’m going to pay you money to prove it.” [rattles tip jar]

Ryan Braun does not have a sponsor box. On the other hand, Ryan Z. Braun does. 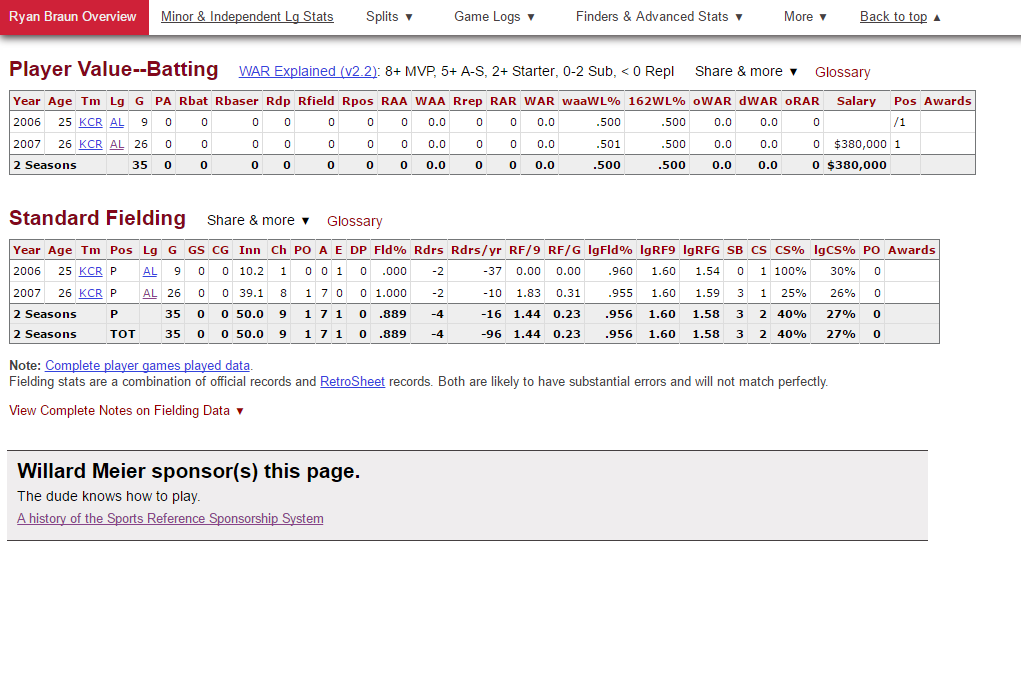 The Internet is filled with mysteries, as is the case with B-R (specifically its turn-of-the-last-century minor league rolodex) but among my favorite is the mystery of Did Willard Meier Sponsor The Wrong Ryan Braun Page.

But if he did mean Ryan Braun knew how to play, and he is a fan of him, then I just have one last question for the defense: 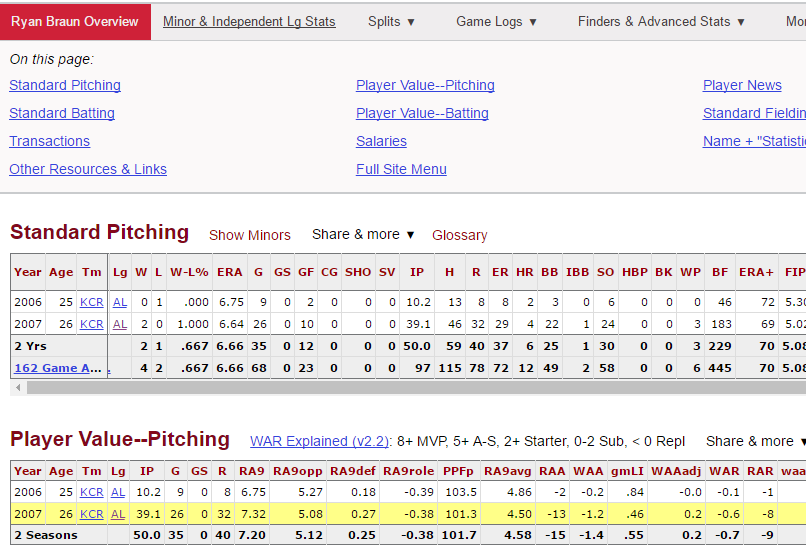 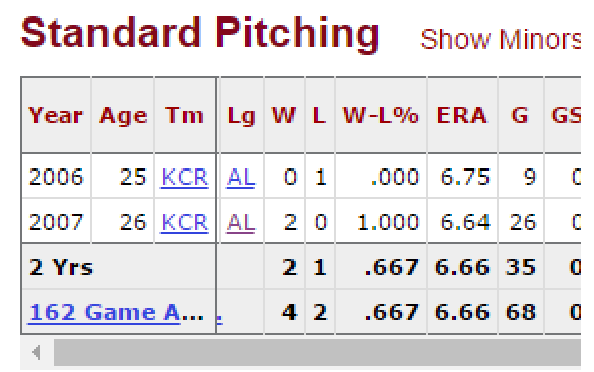