The Charge of the Wide-Eyed Brigade

The Pittsburgh Pirates, in an attempt to right the ship after a lackluster 2016 season, replaced two coaches—first base coach Nick Leyva and third base coach Rick Sofield—with Kimera Bartee and Joey Cora. Cora joins the Pirates after a successful first year managing the club’s Double-A affiliate, the Altoona Curve, and is charged with improving the Pirates’ woeful baserunning and infield defense.

Joey Cora is charged with many things: in Pittsburgh, responsibility; in his heart, an effusion of emotion; and, in my past, with being the first player I picked to follow entirely on my own. I had other, more logical targets in those mid-nineties; the Phillies had no shortage of colorful oddballs, and I loved them. But the Phillies were too much like home, too known to be mine. Instead, I latched onto the baseball team fifth-farthest from home, studded with such wonders as The Kid, Edgar, the Big Unit. But, as with many matters of fandom, it was

mine not to reason why,
mine but to watch him cry. 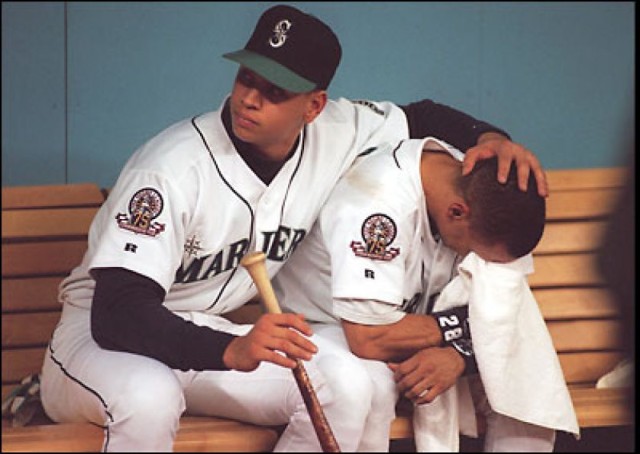 The Charge of the Wide-Eye Brigade

(With respect and apologies to Alfred, Lord Tennyson for assistance in reconsidering some significant moments in the career of Joey Cora.)

On March 7th, 28-year-old Marcus Walden tossed an inning for the Boston Red Sox. He needed only seven pitches, all strikes, to retire three big league hitters. He struck out Derek Norris and the one-hundred-and-thirty-five million dollar man, Ryan Zimmermann. If you checked your phone, you might have missed it.

You probably are not familiar with Walden; perhaps you glossed over the first paragraph and mistakenly believe that this vignette is about a former all-star named Jordan. Marcus Walden is a name on a page, not even an obscure longman with a cup of coffee in Pittsburgh on his ledger, but an anonymous pitcher unfamiliar to all but friends, family, and the most dedicated observers of minor league box scores.

Playing for a town that actively celebrates Truck Day, a team that boasts 1.65 million Twitter followers, and an industry that collects and records more specific data about each employee than even my boss could fathom, Walden has nonetheless eluded our collective purview. Watch any spring training game and you’ll see hometown announcers lob softball questions to the pitching staff, the hitting coach, and the owner’s dog; the number 73 Walden’s jersey, however, is just large enough to shield him from this world.

There is no record of how Walden felt after his outing on Tuesday; presumably, more pertinent ledes distracted Pete Abraham that evening. Were this the humble 1950s, we might prescribe Walden with a howdy-doody personality, here to help the team win, happy to step on the same green grass as those gosh darn big league ballplayers. If that trope feels dated, it should: Walden is pitching for his professional life, not celebrating his seventh birthday. This was his third spring training appearance this season, and the tenth of his career. Facing the likes of Zimmermann and Norris may not be old hat yet, but he’s at least on recognizable ground.

But if aw shucks is stale, so too is the politically-charged romanticizing of the grind you’ll find in modern counter-culture think pieces. This is the kind of essay that pretends to take a deep probe into Walden’s psyche, searching for a proletarian motivation in a man the writer has never met and twisting a successful outing against the Nationals into validation for our protagonist’s propositum in the face of long bus rides, mounting career disappointment, and corporate greed. In each case, it is not Walden’s story, but the story the writer wants Walden to have. Anonymity provides a man freedom from this appropriation.

We simply don’t know how Walden felt after the game. He remains under the radar, his performance untethered from the expectations of a region, his personality barely exposed to social media. Those things may change in the future. For now, there is only Marcus Walden and his next pitch.

A Picture of Dale Sveum Is Worth More than My Car

One of the eternal conflicts of man centers around his place in society, his ability to be one and yet a part. Can one be truly unique and still be relatable to one’s worldly comrades? Or are we all effectively identical products of our environment, separated by shallow distinctions and self-aggrandizement?

No such question must be asked of your 1990 Upper Deck Dale Sveum baseball card. There are approximately 900,000,000 such cards on earth today, and they are all, ignoring condition, completely identical. They all stand at the same branching path of a man’s life, a man who once hit 25 home runs in a season, and who never will again; a man whose photograph you own, and who will never own yours.

There is comfort in such consistency across lives. There is also, embedded into the bleached cardboard, despair. Not only for the valuelessness of the card itself (negative value, in fact, for the card takes up volume and weight, and provides no other service) but because it is another reminder that you are not special. Your cares, your achievements, your free verse poetry overlaps everyone else’s.

But what if I were to offer you freedom from this fate? How much would you pay for the chance to be truly unique, to be guaranteed a life impossible to duplicate? 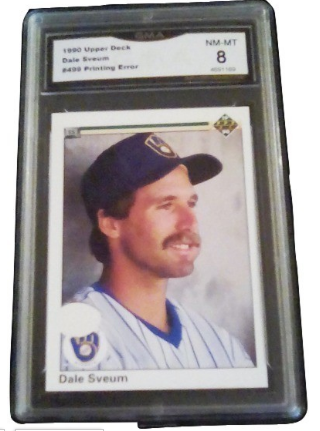 It’s hard to tell, but you see that little white spot above the logo on the bottom left hand corner? The printing error? Not a misfire of an ink cartridge, but an act of god. That makes this card one-of-a-kind. Forget your Bill Ripken F-Face cards; there’s a million of those. Forget your illegal Alex Gordon rookie cards and your Dale Murphy reverse negatives and your 1974 Topps Washington National League cards; they’re all common, in the sense that there are more than one. This particular arrangement of molecules, this subtle criticism of Sveum’s career, this flawed masterpiece can only be owned by one person. Let it be you.

You need to be logged in to comment. Login or Subscribe
jfranco77
Like, are we sure that's a printing error on the Dale Sveum card? Or just someone got a sticker on it and peeled it off by accident? Did Upper Deck ever confirm that they made this error? I'm guessing the "8" that it was graded is just the card condition and GMA didn't verify the error itself?

The ad says "Looked around for years on the internet but never found another one like this" - is that the standard these days? I'm genuinely curious about this!
Reply to jfranco77
euqubudhp
The vendor's seller is suspiciously low-res.

What we do know about 1990 Upper Deck is that it's surprisingly easy to doctor: you can erase the ink off the cards with a typical pencil eraser. So if this card really were valuable, it would be by no means impossible to print your own three-thousand-dollar bill.
Reply to euqubudhp