WHAT IS A RENF? A BIRD

Embracing change is one of the hardest concepts for a human. The ceremonial ballet of throwing four pitches has been scrapped, and we are having a hard time with this. Even names take a while to adjust. The Devil Rays, for example, took a year or so to get out of the sports scribe subconscious, even going as far to fining employees one dollar for improper usage. It took Istanbul over 200 years to finally getting everyone else to stop calling them Constantinople. We still call that big thing Sears Tower. I still call the video game Dragon Warrior.

But radical changes in baseball, like most PAs, are hit or miss. Pitching changes are AOK, provided they work out (see: Orioles, Baltimore 2016 Postseason). Yet it didn’t seem too hard for some baseball players to change their names. A brief history:

-2017: Nick Castellanos is changing to Nicholas

And trades! The most universally accepted system of change. The progression of thought on a player team change is rather complex:

Uniform changes are a different story. When the jerseys change, well, get your pitchforks and let’s start canvassing for blood. Case in point, the San Diego Padres took another uniform reboot with a fresh white and blue uniform, because only a paltry 11 of 30 uniforms look like that (a percentage equal to Hank Conger’s slugging).

But people seem to be OK with the name changes, so it’s high time to amend the names of the Padres players, in the best way possible: one-name players. Two of the most popular entities do it: Brazilian soccer and NES baseball games. 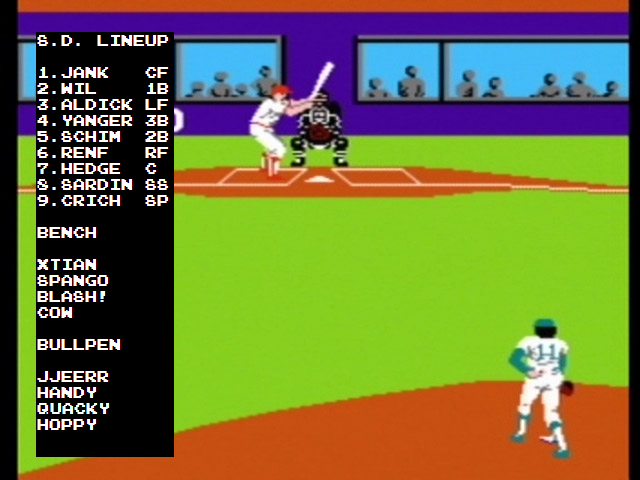 The Home Run Is Grand; The Fans Are Grander

The semicolon is oft-abused and much maligned as the most pretentious form of punctuation. People generally either avoid it entirely or doggedly place it before every single coordinating conjunction in an attempt to seem educated. Its purpose is so rarely understood that people berate it for merely existing, as though they already know its miserable fate. But when used correctly, to hold together two independent clauses who could exist on their own, but shouldn’t, as they are far more beautiful together.

Now, unless you share an affinity for semicolons, I probably sound like a crazy person, but let me warn you: I am about to sound far crazier.

Perhaps the only thing that makes me giddier than a well-placed semicolon is baseball, but since journalism rarely makes use of complex grammatical structures and players certainly aren’t throwing them around, like two independent clauses, my loves have thus far remained separate. That is, until Tuesday. Because on Tuesday, Mookie Betts and Hanley Ramirez hit back-to-back first inning home runs off the Nationals’ Joe Ross. 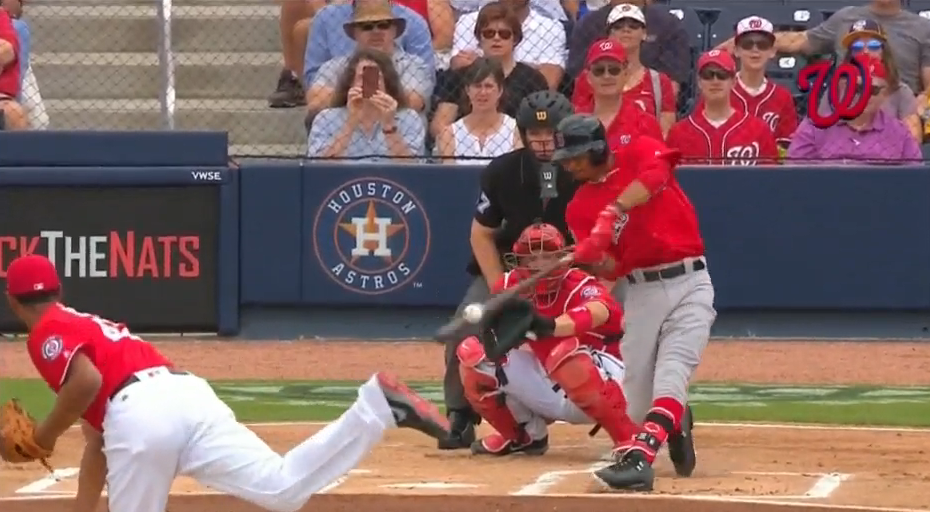 That is, two independent (I know, I know, not entirely independent, but it takes many independent sentences to create a story, so just go with me) at-bats that are so related and so much more beautiful when pressed together. And they have to be brought together to fully understand both, in their significance to each other and the game as a whole.

And then I watched the video several times (partially because it took me that long to get the above mediocre screencap) and realized that these at-bats personify spring training:

People either disregard it entirely, thinking it a waste of time and something only pretentious baseball fans care about to seem more intelligent than the rest. Or people go crazy about it, either desperate for some semblance of baseball after a long winter or desperate to scrape together whatever meaningless statistics exist in order to create the perfect fantasy team. 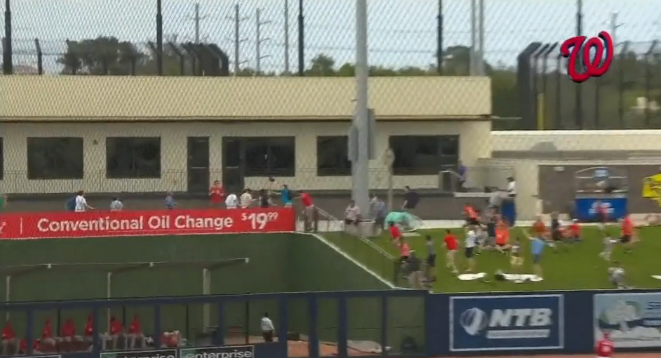 But then there are the people on this hill who chased after Hanley’s home run. They capture the beauty that is Spring Training. They’re there mainly to lounge around in the sun and perhaps catch a glimpse of one of their favorite players doing something utterly routine, but somehow special at the same time, like hitting a home run that lands next to them.

They know the whole concept of Spring Training is largely meaningless, meant for fans and players to relax, have a good time, and listen to some mariachi music while wiping off the cobwebs that have gathered during the winter months. While we do not know about these fans’ usage of the semicolon, or their baseball fandom at large, their position on that hill during this Spring Training game points to their appropriateness. They do not make more of these games than they should, nor do they ignore them completely. Their attendance is not forced or pretentious. It merely acts as a means of connecting two events in a way that says more than either could alone.

They are the perfectly placed semicolon separating Spring Training from the regular season. You could watch all 36 March games and all 162 regular season games without giving a thought to these fans. But when you take note of them and purposely insert them into the narrative, you create something beautiful that deepens the meaning of baseball as a whole.

Wednesday night, the Mariners played the Indians in Peoria. The announced attendance was 7,645 souls. Among the uncounted were general manager Jerry Dipoto (1), Assistant GM Jeff Kingston (2), and Director of Baseball Operations Justin Hollander (3). It’s not unusual for front office personnel to attend games, or for the broadcast camera to find them, but you don’t often see them so exposed. It’s rare to be able to scout those so obviously scouting.

It is one of life’s small mercies that Boog Powell can’t see his boss in this moment. Once you get past the sixth inning of a spring training game, you have to stay. If you’re the general manager and you’ve been there seven innings, you can’t just slip out. The guys in the dugout have seen you. Like so many other workplace things, the decision to leave would be a political statement. You know you have to stay and watch Boog Powell. Justin Hollander yawns audibly. Not because of Boog Powell, but not in spite of him either.

III. I’m not sure know if they know who Zach Shank is

Jerry Dipoto made 13 trades involving 36 players this offseason. Zach Shank wasn’t involved in any of them. He was taken by the Mariners in the 28th round of the 2013 draft. He’s a third baseman. He’s from Pennsylvania. I’m not sure that Jerry knows who he is. Why would he? He’s still a Mariner. I’m sure Dipoto has some idea of him. If we were to start listing off people’s names we know, when we got to “Zach” “Shank,” I bet Jerry would pause and say, “I have one of those.”

But without the benefit of literal labeling, he does not seem to know what a Zach Shank looks like. He asks Jeff Kingston. “Who is that guy?” Only, I’m not sure Jeff Kingston knows, either. He goes a little still to buy time and look thoughtful. Justin Hollander glances up and squints, because he knows the question is coming to him next. Shank, for his part, singles a moment later, giving them something else to do, namely react to stimulus, and proving himself to be a team player. “Zach Shanks are okay,” Jerry probably thought to himself.