For nerdy baseball fans, the worst trade of the offseason was the Reds’ swap of Dan Straily to the Marlins. That’s not because there was an especially egregious mismatch in value in the deal; it was because the move separated Straily from the Reds’ beat reporters.

Just before being dealt, Straily spent almost an hour on a podcast with Zach Buchanan, one of the Reds writers for the Cincinnati Enquirer (and author of the Reds chapter in this year's Baseball Prospectus Annual). It was a delightful listening experience: wide-ranging but detailed, relaxed, smart. They talked about hunting and (ironically) what it’s like to be blindsided by a trade. My favorite discussion centered on the trip to Driveline Baseball from which Straily had returned just before the interview.

At Driveline Baseball, Straily had been throwing with some wearable technology and under the study of high-speed cameras. That allowed him to assess the stress his delivery was putting on his arm, but it also gave him a chance to work on something with which he’d never felt especially comfortable: a two-seam fastball.

“It’s a fine line sometimes, when you try to make different pitches better, or add a pitch,” Straily said. “You don’t want to take away from what already works. So, it was kind of a test for myself to go up there … and see that [adding a two-seamer] hadn’t affected my changeup, hadn’t affected my four-seam fastball or my slider.”

Straily has used a two-seamer in the past (including early last season), but called those efforts “a shot in the dark,” playing with grips and seeing what happened. This effort, from the sound of it, was much more scientific.

“Yesterday was a little different,” he told Buchanan. “I watched [then-teammate Caleb] Cotham and Trevor Bauer using some high-speed cameras right at release point to kind of reshape Caleb’s two-seamer … so when I was able to throw today, I was able to check out the instant feedback of spin axis and spin rate.”

That was interesting information, because Straily started last season with five pitches, but finished it with only three.

Last spring, Straily landed unexpectedly with the Reds after Houston cut him at the end of camp. Cincinnati pitching coach Mark Riggins suggested an adjusted sinker grip, so Straily tried it out. The experiment lasted two months. Straily tried to use the pitch as a secondary fastball against lefties, something to lessen his reliance on the four-seamer and, perhaps, to invite more balls to be hit on the ground. The pitch ran more to his arm side than his changeup did, and sank more than his four-seamer did, so it seemed like a natural pitch with which to work lefties away. 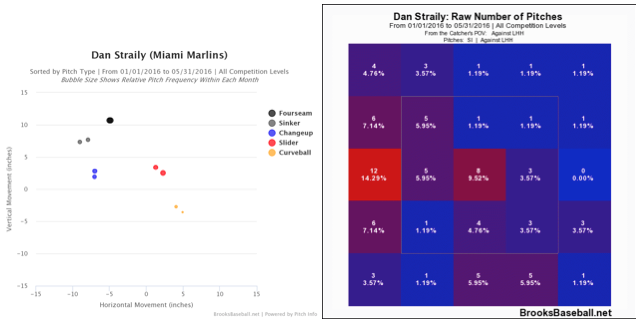 Few batters chased the pitch out of the zone, though, and it didn’t get many whiffs, even for a fastball variant. Worse, right-handed batters hammered the pitch, slugging .860 against it. On the face of it, scrapping the offering made sense. But arguably it wasn’t the pitch itself that didn’t work for Straily. It was the way he elected to use it, and what he had left when he exorcised it.

When he’s not using the sinker (and if we ignore his curveball, which was mostly for show last season), Straily has three pitches. That was the case throughout the second half of 2016. During that span, we saw his game plan with that three-pitch mix. His four-seamer leads the way against all batters. His slider is the secondary weapon against righties, and the changeup against lefties, though he ramped up use of the third weapon in each case down the stretch.

Here, we turn to the new tunneling data we rolled out last month. Last year, Straily paired up his four-seamer and his slider some 498 times—278 fastball-slider sequences, and 220 slider-fastball ones. Here’s the data we have on those sequences:

Any way you slice it, it’s hard to find anything special about Straily’s pairing of the heater and the sweeper. He’s a bit below average when it comes to throwing the pitches out of the same arm slot. There’s not even an average amount of velocity separation on the pitches. The movement is average.

The news here is not good, per se. Presumably, that’s what led Straily to set the sinker aside. Though he throws the slider and sinker out of much more similar arm slots, by the time the pitches reach the tunnel point, the batter has had ample time to tell one from the other. His below-average post-tunnel break differential is especially telling. It’s why he so emphasized the release while he was at Driveline: Straily’s sinker was coming out of the hand on a trajectory he just couldn’t control well enough.

The numbers on Straily’s four-seamer’s interaction with his changeup (I’ll spare you the table) are much more encouraging. His Break:Tunnel ratio on that pitch pairing was tied with Jose Fernandez’s, and while they didn’t get there in just the same way, that says something real about the effectiveness of those two pitches. He should stick to throwing them against lefties in 2017, mixing in his slider as an out pitch thrown to the back foot with two strikes. When he told Buchanan he needed to make sure mixing in the two-seamer hadn’t “changed anything” with his three main pitches, this is what Straily was talking about. There’s plenty to like about his existing repertoire, especially against opposite-handed hitters.

Lefties have never been Straily’s problem, though. They have a weighted multi-year True Average of .247 against him, and that figure was .237 last year. Righties, however, have a .268 weighted TAv, and have slugged nearly 100 points higher than lefties. Against right-handed batters, Straily needs the sinker/two-seamer on which he gave up last season (and which he was using wrong, anyway).

The version of the pitch he threw in 2016 won’t work, but without an improved version of it he will continue to have trouble keeping righties from hitting him hard. His four-seamer and fastball just don’t mix nicely enough to consistently induce weak contact or strikeouts. Both pitches also have considerably more rise on them than the average pitch of their type. The same is true of the two-seamer as Straily threw it last season; he needs to adjust his arm action or release to get more sink and less run on it.

Recall the ends of Straily’s quote from the Buchanan interview. He was focusing, at Driveline, on refining his spin axis. That’s going to be important. Spin axis can be a pain to explain, but it boils down to this: some spin creates movement, and some doesn’t. The direction of spin matters as much as the amount, with anything other than a four-seam fastball. By identifying the axis around which the ball spins, we can predict which way the ball will break.

Then, the spin rate helps determine how much. Straily’s changeup (which he throws from a slightly lower arm angle) has a spin axis that allows it to sink more than about 80 percent of pitchers’ changeups. Last season, though, his two-seamer had a spin axis that engendered more lateral movement and more rise. It moved like a hybrid of his four-seamer and his changeup.

To get more righties out, Straily needs to calibrate his sinker to work more like his changeup, and then bifurcate his repertoire: four-seamer, changeup, slider to lefties; four-seamer, sinker, slider to righties. One of the early joys of tunneling data is that we’re seeing patterns like this. For a number of righties (and it could turn out to be a huge number, but the fun of all this is that we’ll need to work through a lot of it case by case), it seems like a sinker should be a complement to the fastball and a substitute for the changeup. Though the pitch runs away from an opposite-handed hitter, its highest utility for many hurlers seems to be as a power pitch thrown toward the hands of a same-handed one, setting up the breaking ball.

Fans of the Pirates certainly won’t be surprised to hear that. Maybe no fans should be especially surprised. This spatial understanding of the art of pitching is on the cutting edge only for fans. Teams got to a lot of this a few years ago. Now, we get to share some of the insights through which they’re still sifting. Given the price they paid to pry him away from Cincinnati, the Marlins must believe Straily can tap into this one.