The day I encountered Tyler Skaggs

[Editor’s Note: This post was re-titled following the news of Tyler Skaggs untimely and unfortunate passing on July 1, 2019. Baseball Prospectus mourns his loss.]

On a recent spring afternoon, I encountered Tyler Skaggs. 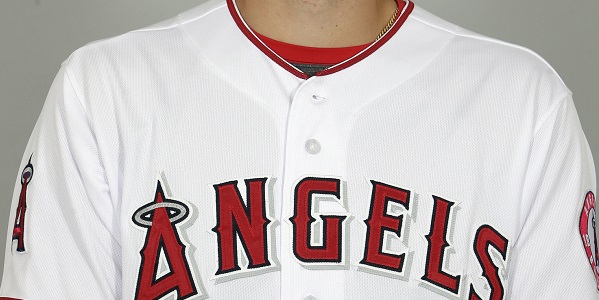 I did not realize it was Tyler Skaggs at first. If I was on assignment while sitting in my living room with a computer in my lap in the middle of a Thursday, it was to watch Lucas Giolito, for whom the panic of his prospect stagnation has been morphed into optimism, due to a trade and the promise of new handlers. But a sharp overhand curveball that tied up Leury Garcia made me scramble for more information on the Angels’ hurler in the blank jersey. Not because tying up the likes of Leury Garcia is an earth-rattling achievement, but a young Angels pitcher–the type of striver who hadn’t earned a jersey name–with good stuff would represent a gap in my knowledge that needed to be corrected.

By the time I had looked up the day’s starter and discovered it was actually Skaggs, he was well on his way to his second walk of the inning, as other White Sox hitters had taken a lesson from Leury’s folly, and noted that all the curves were going to be dumped in the dirt, or possibly lower. He would go on to walk two more, and was pulled with two outs in the first inning, in the rare incident where the manager has to inform their man that there is a level of decorum that will be enforced, even on March 2, and it has been crossed.

It was the work of Kevin Goldstein and Jason Parks that made me switch from being interested in prospects as far as it affected the my team, and the occasional superstar, to becoming a completionist who read about every system–provided those two were writing the words. As someone who followed college football recruiting for a short and regrettable few years, it was easy to understand what Goldstein meant when he said the Diamondbacks had three five-star arms atop their system, named Trevor Bauer, Tyler Skaggs and Archie Bradley.

Bauer’s quirks are so aberrant and so impossible to hide that his wayward journey from tantalizing prospect to frustratingly inconsistent back-end starter type feels like baseball’s equivalent of the supermarket tabloids. Bauer’s command never progressed, which turned his foibles into nuisances. Bradley is still just 24, but is the same huge-stuff, shaky-control guy he was when my coworker was stashing his South Bend Silver Hawks bobblehead like a future collector’s item. Skaggs got cut, which was perhaps a eventuality if you were a disgusted connoisseur of the earlier versions of his delivery, but always a seeming eventuality if you’ve ever believed a young pitcher could make you happy.

Bradley struck out a batter per inning last year despite everything, Bauer is a major league regular at least, and Skaggs, March 2 implosion aside, is 25 and might be kind of good still. He had a 3.54 DRA last season, and hell if the Angels won’t give him more chances to prove he can help. It’s just that the dream for them is gone, all absurd notions of triple aces have been pushed aside for grim realism about the real world utility of No. 4 starters, ‘eating innings so someone even worse doesn’t have to,’ and other comforts that are only comforting if you are already appropriately sad.

When I pontificated about this aloud on the digital wires, I assume most of the White Sox fan requests for me to cram these thoughts, and their applications to their beloved Giolito, Michael Kopech and Reynaldo Lopez, into some uncrammable crevice had a layer of jest of them. But that layer of self-deception is also necessary. It would be one thing if our wildest prospect dreams–at their delirious peak in these spring months–relied on a willful amnesia, but it needs a blindness too, for the memories of prospect lists past are walking among us, and still young.

The record company’s gonna give me lots of money and everything’s gonna be alright.

Few inhabitants of that venerated pantheon of Classic American Sports Films engage with the actual politics of sports. Perhaps that’s for the better: we don’t need any more Blind Sides, thank you very much. But there is one film that dares to be political, to critique sports business and its inflated sense of ego.

That film, of course, is 1998’s BASEketball, the bizarre brainchild of Airplane! and Naked Gun veteran David Zucker, starring South Park creators Trey Parker and Matt Stone. Zucker, a Milwaukee native, tells the tale of two losers (Parker and Stone as Coop and Remer) a few years out of high school who invent a hybrid basketball-baseball pickup game, eventually forming a professional league at the prodding of Ernest Borgnine. The story focuses on the Milwaukee Beers, and the two slacker protagonists harbor the sort of working class ideals one might expect from a pair of Wisconsinites. 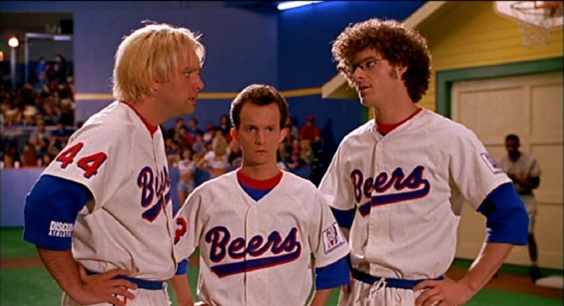 Coop and Remer face a series of tough decisions as their team and league gain popularity–problems primarily in the form of the league’s George Steinbrenner proxy, the Dallas team’s owner played by Robert Vaughn. When Borgnine’s character dies, his widow (Jenny McCarthy) pairs up with Vaughn’s character to push for severe rule changes that would compromise the few rules upon which Coop and Remer insisted when founding the league. That means relocation of teams, corporate sponsorships, and likely the abolition of equal player salaries.

In this sense, then, the movie works as a sort of counterfactual history of Major League Baseball. MLB, led by Acting Commissioner Bud Selig, had just recently endured the 1994-1995 players strike, and fans didn’t trust owners or players. The Beers are Zucker’s bizarro Brewers, a team who succeeds precisely because they don’t sell out. At the time, Selig was pushing for increased revenue sharing, a brazenly self-interested agenda considering his incumbent ownership of the Brewers, and he cried poverty whenever pressed about his team. Just a few years out were Selig’s almost unilateral attempts to relocate or contract several teams. And yet, here is a fictional league that bucks not only relocation but trades, founded by actual players, where every athlete receives the same salary.

Some of the film is quaint idealism, sure, but there are moments of capable satire: a subplot involves a scandal over children working in sweatshops producing Remer’s clothing line; there’s the television mega-deal implied by the presence of Bob Costas and Al Michaels, generating tons of revenue for the league; and there’s the wonderful game mechanic of the “psych out,” a nod toward baseball’s starched and stoic customs, whereby a defensive player may do any number of outrageous (i.e. raunchy) gags or taunts to distract an offensive player while attempting to score. In some ways, it’s a spiritual precursor to Adam McKay’s Wall Street satire The Other Guys, where madcap comedy doesn’t preclude an end credits that explains how a Ponzi scheme works. BASEketball picks apart a host of American anxieties unique to the late-1990s, and ones that endure. If the satire doesn’t grab you, at least stay for the ska. Wait, where are you going?

Albert Pujols Runs into his Bat at a Coffee Shop

Oh, hi. Didn’t expect to run into you here. I dunno, I kind of figured you would have moved or something. I’m not sure where, I guess. Never really thought that far ahead. Anyway, how are things? Good, glad to hear it. Oh, I’m fine, I suppose. The same, really. No, I got a new place, actually. Yeah, somewhere closer to downtown. The old place was a little … big for me. Yeah, Fred’s still with me. He’s good. I think he finally got the hang of the litter box. Only took him, what, six years?

So, how’s … how’s work? Really? Where at? Hmm, don’t think I know it. Everything good there? Great. Great. Glad to hear it. Yep, I’m still at the same place. Oh, it’s fine. It’s work, you know? It pays the bills. No, Karen left, thank God. The office has a much better vibe with her gone. Yeah, it’s been nice.

So … you here with someone? I know I probably shouldn’t ask, but we haven’t spoken at all since … you know … and I know you aren’t on Facebook or anything, so I guess I’m just curious. Oh yeah? Well good for you. What does he or she do? Ha! Really? Second baseman. No, it’s just I never would have guessed you’d end up with … you know what? That’s great. So long as you’re happy, who gives a crap?

Me? No, not really. A few dates here and there, but nothing really longer than a month or so. I’ve just been real busy with work and stuff, you know?

Dad’s fine. Doing his treatments, taking his meds. He actually has a little skip in his step these days. He doesn’t have much, but he has me and the house and his garden. Yeah, he’s still yelling at cable news all day. Old dogs, new tricks, and whatnot, I guess.

Well hey, listen. It was great seeing you. I’m glad to see you’re doing well. Yeah, thanks. Thanks. Well, take care of yourself. Try not to let your sister drive you too crazy this Thanksgiving, OK? Ha, yeah, I suppose. OK, well I should get going.

It was really great seeing you. Yeah, me too. For sure. Let’s do that. Alright. Bye then.

You need to be logged in to comment. Login or Subscribe
buddha
I must say, I am quite enjoying these daily offbeat gatherings.
Reply to buddha