Welcome to Short Relief, a new daily series at Baseball Prospectus. This introduction comes with a warning: what follows will appear somewhat different than much of the traditional, analytically-minded writing at BP. Instead, what you will find under this banner is a series of shortform articles by various writers, concerned primarily with the aesthetic, the metaphorical, and the ridiculous aspects of baseball as an unproductive labor that induces such devotion and contentment.

The Mathematical Beauty of Maikel Franco

On February 25, Maikel Franco gathered four bases twice in a Grapefruit League outing against the Yankees. One set of four originated in a home run in all of its rightness: a baseball hit square and launched into the left-field tiki bar. The other—well, let’s describe it thus: Franco swatted a line drive to left-center, and the Yankees’ Tyler Wade brushed the ball with his glove before the ball rolled beneath the outfield padding. Wade threw up his hands to signal the ball out of play, but Franco continued around second and made up his mind to try for home. Wade’s eventual recovery and throw came too late to get the (slowly) chugging Franco at home. Like many spring training happenings, the play was wonky and awkward, especially as it was rooted in Franco’s inelegant wheels. 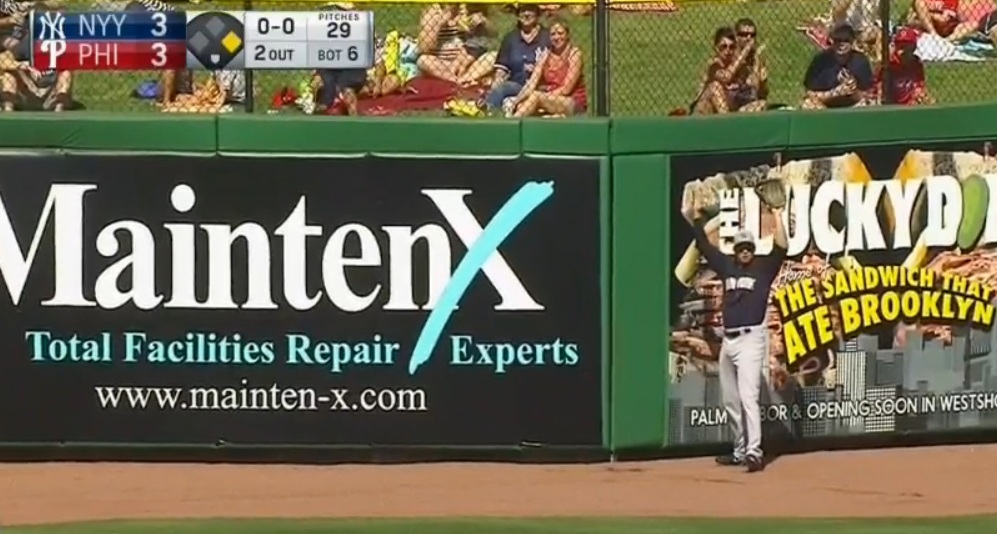 Still, there’s mathematical beauty in the moment. Maikel Franco wears jersey number seven. Seven is both a prime number and part of the factors of 28, which is a perfect number, meaning all of its factors [1 + 2 + 4 + 7 + 14] add up to itself, creating a harmonious numerical circumstance. One could attach further meaning to these numbers by turning a string of integers into a sentence: Maikel Franco hit his first homerun of the season and also picked up two bags on what was ultimately a double and error, but then he rounded all four bags while wearing that lucky seven, so seven rolled twice across home plate—seven twice is 14. 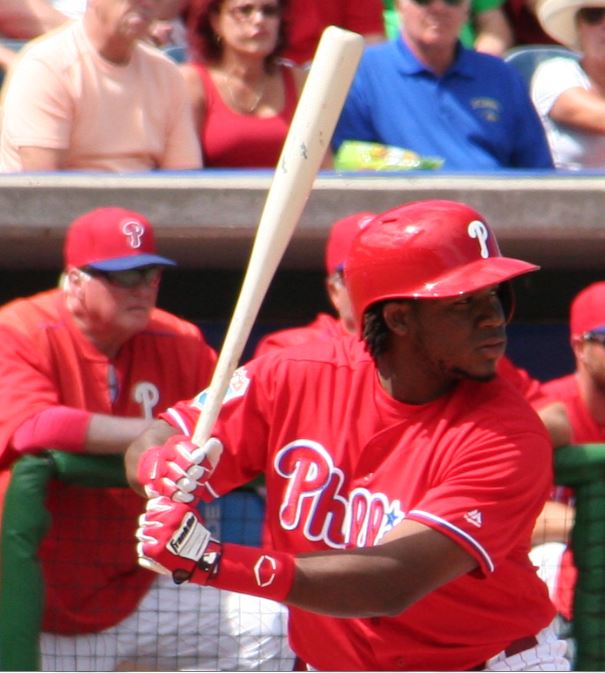 Okay, the last part is a stretch, as is my favorite connection between seven and 28: the multiplier of four, a dinger’s worth of bags for the young Franco, on whom expectations and questions of the future weigh heavily this season. The specter of Manny Machado, also wearing a prime number between his shoulder blades, and the Phillies’ relatively unencumbered 2018 payroll, flicker in the third base line.

The novel The Housekeeper and the Professor, by Yoko Ogawa, places number theory at its heart (and is, consequently, where I learned about perfect numbers). The eponymous professor is a mathematician who has suffered a traumatic brain injury. After 80 minutes, his memory resets to what he knew at the time of the accident, and so he finds great comfort in math’s constancy, which is at times expressed via the professor’s connection to his favorite baseball player, Yutaka Enatsu of the Hanshin Tigers, and the numerical rhythms of the game. Because the professor’s mind has frozen Enatsu in 1975 as well, the ERA and strikeout numbers the professor rattles off are stripped of meaning in the context of the Tigers’ current season—Enatsu isn’t even a Tiger anymore.

Similarly, a string of numbers originating partially in unrelated information (a player’s jersey number, a deliberately narrow sampling of game happenings) are stripped of meaning twice: by their yoking for particular intent and by the whimsical nature of spring training. Tyler Wade, who lost and recovered a baseball beneath the outfield fence, has not played a single official game of his minor league career in center field, and Maikel Franco is unlikely to stretch much for extra bases during the regular season. Depending on the outcome of this season and the machinations of free agency, number seven may or may not play out his prime in a Phillies uniform. It’s utility, not beauty or symmetry, that will dictate that, and yet, as the novel’s narrator says, “I remembered something Professor had said: ‘The mathematical order is beautiful precisely because it has no effect on the world.”

The Future of Being Lied To

Given the almost endless conversations about the pace of play, entertainment value, and overall viability of baseball to a younger audience, you’d be forgiven for ignoring the actual baseball being played under your very nose these first few days of March. “What is the relevance of America’s precious pastime,” the usual pundits worry, as split squad teams take the field in configurations that will never see the light of a regular season stadium.

But largely existential and mostly non-material stakes notwithstanding, if there was any time to wonder about the capital-f Future of baseball, Spring Training is it. There’s the obvious link between “the future” becoming present for all 30 MLB clubs as their top prospects see some of their earliest serious baseball with top-level veterans – fear not, though, dear reader, I will not be following that hoary analogy to its conclusion. I’m more interested in the entailments of the media environment of Spring Training, in which every 2 or 3 inning outing is endlessly dissected by pundits for fantasy and real-life baseball information. These largely meaningless games, now picked-over carcasses of significance, might represent a rarely-discussed dystopian future for baseball.

Take the curious case of Shelby Miller and the Arizona Diamondbacks, for instance. Miller, who has googled “Bagwell trade will it ever be topped” at least once a week since last offseason, had an abysmal 2016 season while his opposite number Dansby Swanson flourished, reaching the majors with the Atlanta Braves. This spring, however, Miller has looked incredibly sharp, striking out nine in five innings of work, leading some to wonder if he could anchor a D-Backs rotation behind Zack Greinke, or whether he could be a mixed-league option in standard fantasy formats (mostly, we’ll admit, the latter). And so all of this is great, right? Young pitcher makes good, energizes a marginal fanbase, revitalizes baseball through flashy strikeout-driven mastery?

Well, sure, agreed…if it weren’t March 7th. Because it’s March 7th, Miller’s incredible first two starts have to be put in their own strange context, where outings are as short as a bullpen outing (3.0 and 2.0 innings respectively), hitters lag behind pitchers, and competition is famously uneven. It’s an environment like, well, the low minors. And while we all are excited about the extension of access into our favorite teams’ prospects, extending to the point of 16-year-old phenoms in the DSL and VSL, Spring Training is a bit of a cautionary tale.

There’s a future world – and so there is of all things, Leibniz might remind us – in which every inning of a 17-year-old pitcher’s career is dissected by pundits, fine-sliced by Statcast data, and solemnly anticipated by grown women and men the nation over. Meanwhile, we will find ways to streamline the context and growth conditions of these young athletes and gloss over development realities enough to disappoint a whole new generation of young fans who get excited for a superstar eight years before his debut. The streamlining these tools give us consistently contribute to reinforcement of unrealistically optimistic scenarios. Not to sound like a Luddite, but such a microscoped world seems as far from relevance in the modern sports world as any 18-inning game.

So for the love of all that is good, be the regular season mentality you wish to see in the world.

A Farewell to Fraud

I don’t know how to feel about the fate of the intentional walk. Functionally, it’s an unsightly birthmark on the sport, a consequence of strategies that can never quite be eradicated, like fouling in basketball or leaning on the first person in writing. Aesthetically, the intentional walk was like an em dash: a deliberate, almost clumsy pause, not just a wasting of time but an active destruction of it. I understand why, in its preoccupation with haste, the league did away with it, but I personally enjoyed the hanging moment, the awkward sheepishness of the defending team, scuttling the at bat for the sake of the inning. I will miss the intentional walk, I think. Until May, when I forget.

But as we say farewell to a friend, I want to take a moment to celebrate four of the 31,181 intentional balls we didn’t have to watch. Each one is a snowflake, or at least a finger painting brought home from your child’s preschool.

According to Statcast, the slowest pitch thrown in the past nine years belongs to… Max Scherzer?

At 40.6mph, Scherzer looks like he’s chosen a 1-0 game in the seventh inning to try practicing his knuckleball. It makes sense, really: the two-time Cy Young winner has only thrown eleven intentional walks in his career, and never more than two in a season. How are you going to build a routine that way? How, given the restrictive power of positive thinking, could Max Scherzer even let himself believe that he’d ever be required to perform this act? It’s almost as if Scherzer has to pretend he’s someone else, method act his way out of this at bat. (And it works; next batter, he strands the runners at the corners and wins the game, 1-0.)

Then you have James Shields, the wildest digitally recorded pitcher (Octavio Dotel, the true champion, had his finest performance lost to pre-mlb.tv history) who without the usual limits and routines of pitching performance is utterly lost:

If Scherzer’s mental block appears as he stands on the rubber, Shields appears to lose his concentration halfway through his delivery; it’s as if he forgets why he should still be holding the ball, and lets go. Man is nothing more than an unseemly tangle of processes.

Or consider Kevin Jepsen, whose failure is so perfect that it negates his intentions.

There’s something tragic about Jepsen pitching himself into a position where a strike is no longer an acceptable strategy, by his manager’s determination, and then proceeds to throw one anyway. Statcast calls this pitch middle-in, although it’s undone by some very poor catcher framing.

Finally, we have Pat Light.

This is not a very good intentional ball, though hardly the worst. Light gives a half-hearted leg kick, throws with his shoulder, and lofts a ball nearly to the middle of the plate. It’s sheepishness put into motion, the kind of delivery that deserves to be immortalized by his baseball card that year.

At the moment of their deliveries, none of these pitchers are really pitchers anymore; they are all frauds. And it’s strange that the intentional walk never found more love, because there are few things in sports we enjoy more than the fraudulent: the position player pitching, the pitcher fielding, anyone doing something they’re not supposed to do. This is the moment when athletes become human.