Dave Stewart was in the news recently. As the agent for National League co-home run leader and whiffmeister Chris Carter, he ruminated that his client could play in Japan this season until he wound up signing with the Yankees.

His role as an agent is a return to the business following a two-year gig as general manager of the Diamondbacks, beginning in September 2014 and reporting to chief baseball officer Tony La Russa. His tenure there was … um … well… take it away, Keith Law. (For those of you who aren’t ESPN Insiders, the "Time to end the Diamondbacks' reign of error" headline is a good summary.)

And that’s where a lot of people’s knowledge of Dave Stewart ends: Principal of Sports Management Partners, agent for Carter, Enrique Burgos, and Chris Herrmann, bad GM/friend of La Russa.

That précis gives Stewart the short shrift on two scores. First, his performance in Arizona notwithstanding, it’s not like he was some crony naïf whose sole qualification for the GM job was knowing La Russa. His on-field/front office resume, in addition to his decade as an agent, is in this age of 30-something GMs, fairly lengthy:

While it’s not relevant to the story here, his departure from the Blue Jays after the 2001 season was controversial, as he was passed over for the GM role in favor of J.P. Ricciardi, who had spent three years as player personnel director for Oakland. Stewart resigned, citing the team’s reluctance to hire non-whites for the GM position, a view that had support.

Stewart was born in Oakland in 1957. He was a star athlete in high school, where he played basketball, football, and baseball, earning All-American honors at the latter two. His alma mater, St. Elizabeth high school, produced four other major leaguers, including two outfielders, Steve Braun and Al Woods, who each compiled more than 2,000 plate appearances in the majors.

Although he was reportedly offered 30 college scholarships to play football (he played linebacker and tight end), he instead signed with the Dodgers, who selected him in the 16th round of the 1975 amateur draft. He was the 384th player chosen. The 16th round of the 1975 draft produced three other major leaguers: Leo Sutherland (-0.3 career WARP), Dan O’Brien (0.1), and Paul Mirabella (1.0), so Stewart (29.9) accounts for 97 percent of the major-league value of his round.

The Dodgers converted the strong-armed right-hander, who was a catcher in high school, to pitching. He struggled in his first two seasons, posting an ERA of 5.51 in 49 innings at Low-A in 1975 and 6.90 in 60 innings at Single-A in 1976. Things clicked the next season, though, as he went 17-4 with a 2.15 ERA in 176 innings for Clinton in the Midwest League, earning a cup of coffee at Triple-A Albuquerque. In 1978, he moved it all up a level, pitching 193 innings at Double-A (at age 21—yes, this was long before pitch counts) and two innings for the Dodgers.

Out of minor-league options, Stewart broke camp with the Dodgers in 1981. During his rookie season, he:

After calling Rangers fans “idiots” when he was booed for giving up a three-run homer to the Royals in May of 1985, Stewart was fined $500 and ultimately traded, in September that year, to the Phillies for Rich Surhoff (who pitched 8.1 innings for Texas that year and never again in the majors). Stewart appeared in eight games out of the bullpen for the 1986 Phillies and got released in May with a 6.57 ERA. To this point, he was 29 years old and had pitched 604.2 major-league innings, compiling a worse-than-average (adjusted for park and season) 4.01 ERA. The Orioles gave him a tryout but didn’t offer him a contract, so he signed a deal with the hometown A’s.

He pitched 149.1 innings for Oakland in 1986, starting 17 games and relieving 12. He posted a 3.74 ERA, 4.10 FIP, 3.77 DRA, and 97.4 DRA-. The 1986 A’s were 76-86, their fifth straight losing season. They fired manager Jackie Moore in June after a 4-17 skid, replacing him first with interim manager Jeff Newman and then with Tony La Russa, who’d been let go just weeks earlier by the White Sox. La Russa brought his pitching coach, Dave Duncan, to Oakland with him. Working with Duncan under La Russa, Stewart turned his career around.

As you can see, Stewart was a pitcher whom the metrics at the time favored, though he doesn’t do as well by contemporary standards. During his four-year peak, Stewart led the American League (among 41 pitchers with 500-plus innings pitched) in innings and wins, and he was fourth in winning percentage and ERA. But he was eighth in FIP and ERA+, and 14th in K/BB. He allowed home runs at the fourth-lowest rate in the league but the Coliseum kept balls in park those years—95 park factor for home runs for right-handed batters, 89 for lefties (54 percent of the batters he faced).

This is not to say that Stewart wasn’t a very good pitcher. He was. But the workhorse who compiles a lot of wins with good-but-not-great peripherals … well, we litigated this case during Jack Morris’s Hall of Fame candidacy, right? (Stewart was two-and-done in Hall of Fame voting, getting 7.4 percent of votes in 2001 and falling just below the 5.0 percent threshold with 4.9 percent in 2002.)

Stewart may have ended his regular season career on a low note, but he was one of the most successful postseason pitchers in history. Excluding the 2.1 innings he pitched as a rookie in the split-season postseason of 1981, he pitched 130.2 innings in 18 postseason starts (just shy of an average of 7.1 innings per start), compiling a 2.62 ERA, 1.07 WHIP, and a 10-4 record. He was MVP of three postseason series:

He holds the record for ALCS wins (eight) and is tied for seventh in postseason wins (10). His 2.62 starter ERA is 11th-lowest among 67 pitchers with at least 10 postseason starts and his 1.07 WHIP is ninth-lowest. Yes, small sample size (though 130.2 innings isn’t that small), though again, Morris’ Cooperstown bid was based, in part, on a postseason record that was markedly inferior (7-4, 3.80 ERA, 1.25 WHIP in 13 starts).

So the final score on Stewart: Good, if overrated during his time, starting pitcher (29.9 career WARP, 151st since 1950). Outstanding postseason pitcher. Decent human qualities. It’d be a shame if he were remembered primarily for his time in Arizona.

Oh, and one final point. A few weeks ago, I wrote about the 1988 season, aka The Year of the Balk, one of Stewart’s peak seasons. I mentioned that I wrote that article because writing about Stewart made me think about that weird, outlier season. Stewart set an all-time record for balks in 1988, with 16, and he broke the previous record on May 18. I’ll leave you with one of the more absurd graphs you’re likely to see today. 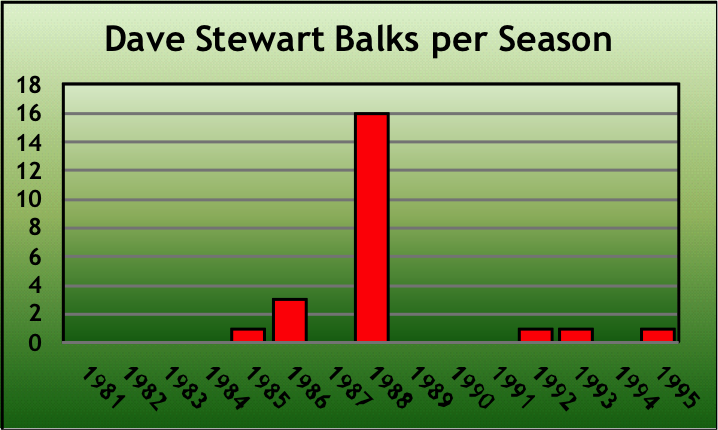 You need to be logged in to comment. Login or Subscribe
50cubs
Stewart should have won the Cy Young in 1990 (22-11/2.56 ERA) but Bob Welch won a freaky 27 gsmes that year and sucked up all the Cy Young votes, despite the fact that he was not even the best pitchers on his TEAM.
Reply to 50cubs
mainsr
IIRC, that was the year that the bloom really started to come off the pitcher wins rose. It was probably just Bill James back then, but Welch's 27 W's and mediocre everything else was a pretty egregious example of how the electorate worked in those days. Stewart was clearly better.

As for the Cy that year, Clemens led the league in just about everything--ERA, FIP, K%, K/BB, WARP, second to Ryan for DRA, sixth in IP, 21-6. I think he should've been unanimous.
Reply to mainsr
ccseverson
Was in the stands as a young teen when Stewart showed off a nice right cross after manager Pat Corralas gave him a mini kick.

I loved watching Stewart pitch those next few years. Thanks for the article.
Reply to ccseverson