Until this week, it didn't actively occur to me that there would still be a human being standing behind home plate even if MLB put in place an automated strike zone. It did sort of dimly, because of course there still has to be a guy back there. Someone has to call close plays at home, and balks, and grant time, and sweep up. But if I’m honest, my mind’s eye envisioned a literal robot, dressed up in the chest protector (why does it need a chest protector?), bleep blorp blurping its way through games. The degree to which an automated zone could alter the contest between pitchers and batters seemed momentous enough; I guess I just thought it was robots from there on out.

In his flurry of potential rule changes, commissioner Rob Manfred made clear that the implementation of robot umps was a ways out; the technology, to his mind, isn’t reliable enough. We tend to focus on an automated zone at two points in time: the moment when we flip the switch, and the later moment when unknowable but expected unintended consequences begin to present themselves. Less time is spent on the actual workings of the thing. Not how does PITCHf/x work, or how and when do they measure each batter’s strike zone, or what effect will it have on the offensive environment? How does the call actually go?

The pitcher releases the ball, the batter doesn’t swing, the catcher catches it and … then. In demonstrations in minor-league parks, the human ump has an earpiece in, and conveys the call he receives from a computer up in a booth somewhere. I can think of few small things as cruel. A person previously endowed with authority must stand there, diminished, and parrot back a sophisticated Cyrano. The most significant part of his job isn’t his anymore. Every call is a reminder that he wasn’t good enough at the hard stuff but that the easy stuff is just difficult enough to automate that he still has to go to work.

He’s play acting at being a home plate ump; he’s a thespian. And it’s awful. Because you know—you know!—that people will still yell at him. Maybe not forever, maybe not for more than a year, but definitely for the first month. For the first month, the home plate ump will be indistinguishable from the Comcast guy. Think about the last time you were in a major-league park. Where did you sit? Let’s say you’re in nice seats, along the third-base line. You’re about 20 rows up, a section over from the dugout. I don’t know, it’s your anniversary. Congratulations!

You don’t know the strike zone. You have a vague idea of it based on the batter and having watched baseball before, but you don’t really know. You can probably tell if a pitch is especially high or especially low. But you can’t see the edges. What’s a corner? You’re useless. You think you know how inside or outside a pitch is, but you don’t. And on right-handed batters, you really have no idea. Couldn’t even see it. You don’t know. And I bet at some point, you yelled about a call anyway.

Maybe you yelled in an acceptable, we-gotta-keep-you-honest-so-let’s-all-do-our-jobs-ump way. Maybe you yelled because you saw a woman in even nicer seats behind home plate yell, and you assumed she can really see. Maybe, if you’re honest, you just yelled because your team was losing by a couple of runs and that’s what you do when your team is letting you down. It certainly feels better to yell at the ump than yell at your team. But you yelled. And what’s more, you thought you were right! It’s part of our dialogue, purely expressive and utterly inarticulate. And you were yelling at a guy who actually made a decision.

There is something empowering about being able to say: "Hey, I'm in some muck, but it is my muck. I made it. I made choices. I called this ball a strike, and maybe, I’ll call another." Maybe the home plate ump is a jerk, and maybe he junked it all up, but he was a judge. A policy maker. He was a person with choices. Now he’s a cog, responsible for the decaying cable infrastructure of a huge conglomerate he has no hope of fixing, and you’re five hours into a six-hour appointment window. He’s not the boss, and you’re still yelling at him.

I wouldn’t do that, you say. I wouldn’t yell. Yes, you would. We all would. Maybe not forever, but definitely for the first month. Think about our reactions to umps during replay.

What day is that from? It doesn’t matter. It could be any day. We could be in the ballpark or waiting in line to return our cable box after we’d finally had enough. Look at the guy in the green coat and pink button down. This is our dude. This dude is all of us. He’s having an ongoing dialogue with the umps as they listen to the control center, miles away. He’s forcefully appealing to the good sense of people who he believes to be morons. And their decisions are over. They’ve made whatever call they’re going to make. Maybe it stung his team; maybe he’s pleading for them to enforce the law. What matters is that they’re there. He can see them. They can hear him. They can’t do anything for him anymore, but he has some things to say.

Listen to these Indians fans at the end of this controversial replay in Game 1 of the ALDS. The replay officials overturned the call on the field to the home team’s detriment.

Sometimes, you can see the umps subtly pleading with their replay colleagues to just let them have one. Look at these two. 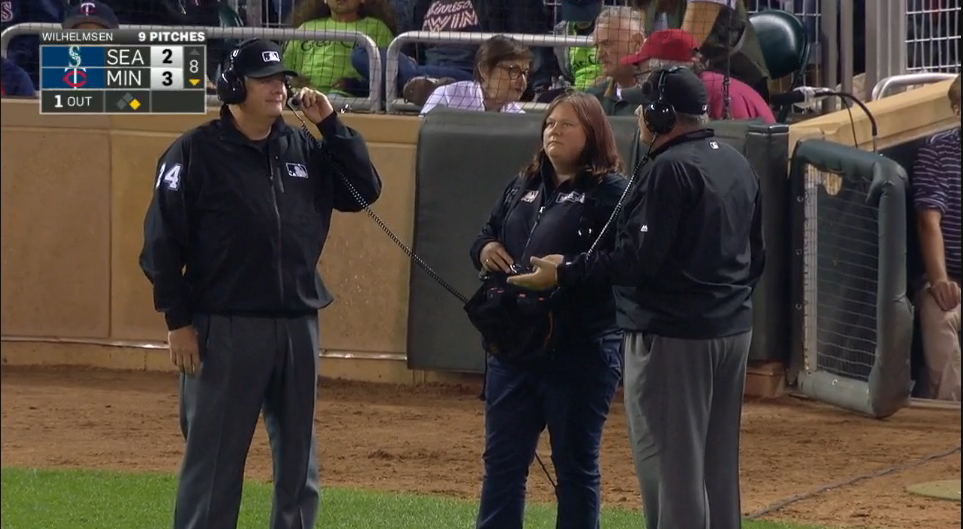 Look man, the one on the right says with his gesture, there’s two of us and 40,000 of them. We just want to get out of here. They know someone is going to make noise. It doesn’t matter if the call is actually right or wrong. It’s another moment to plant a flag. It’s the pledge of allegiance. It’s time to yell.

But maybe the fifth-most important thing is all of us developing our human capacity for patience and compassion in moments of stress and frustration, and being less cruel in small ways. That might be the fifth-most important thing. It might be important to, at times, train ourselves not to yell. Umpires make costly and avoidable mistakes and get yelled at. But right now, those are their mistakes. The world could use more qualified cable repairmen, but we don’t have rush to make ‘em.

You need to be logged in to comment. Login or Subscribe
jfranco77
I love the title. And it makes me think of "Do Mail Robots Dream of Electric Sheep"
Reply to jfranco77
maxcat21
Same here and the Americans are back on 3/7!
Reply to maxcat21
aquavator44
I don't know what date that game was, but I can assure you there were not 40,000 fans at Target Field to see the Twins play the Mariners.
Reply to aquavator44