I’m going to talk about games that last longer than nine innings. Don’t worry, this isn’t another article about putting a baserunner on second base in extra innings.

I already wrote about that proposal, which caused a furor on the internet. I pointed out that extra-inning games have been in decline lately. And last week, our Russell A. Carleton looked at the proposal from pretty much every imaginable angle. So I’m not going to revisit it.

I’m not going to comment on the merits of Sawchik’s proposal. I imagine that, if proposed by MLB, it’d be met with the same reception the runner-on-second proposal received. Rather, I thought his idea raised an intriguing question: What if it were a baseball rule?

Ties in baseball are different than those in other sports. In the NFL, ties are counted as half a win and half a loss. In the NHL, teams tied at the end of regulation play an overtime period and, if necessary, a shootout. Teams get two points for a win but teams that are tied at the end of regulation and subsequently lose get one point. In soccer's English Premier League, teams get three points for a win and one for a tie.

In baseball, ties are not included in the standings. Player statistics count, but the game is not part of the team’s won-lost record. Last year, the umpires called the September 29 game between the Cubs and Pirates after six innings with the teams tied 1-1. The Cubs and Pirates both played 162 games, but the Cubs’ final record of 103-58 and Pirates’ 78-83 excluded the September 29 game. Sometimes tie games are made up later in the season, resulting in oddities like teammates Billy Williams and Ron Santo each appearing in 164 games for the 1965 Cubs, whose official record of 72-90 sums to just 162 games.

As you might expect, ties have become less common in baseball, partly because better weather forecasts can prevent games from starting under conditions likely to turn worse, but mostly because the setting sun is no longer an impediment to play. Here is a graph of tie games per season since 1913. 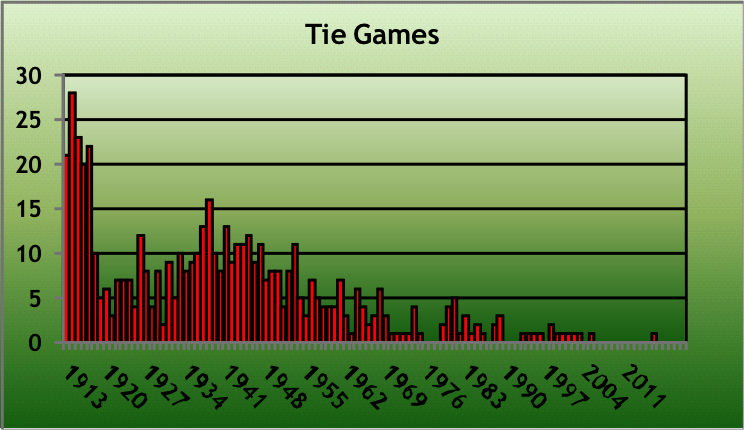 For purposes of this experiment, I’m going to assume that every game tied after 12 innings ended as a tie, with no makeup game. Consistent with baseball rules, those games would be excluded from the standings. It’s like they didn’t exist.

So, would a 12-inning tie rule, as suggested by Sawchik, change baseball standings? As it turns out, yes it would, quite frequently. There have been 109 league or divisional races since 1913 (41 in the 66 years of two league champions, 68 in 48 years of divisional play) in which the order of finish would change if games tied after 12 innings ended that way. That’s a lot, more than one per season.

But in most cases, the changes are pretty minor. Take, for example, the 2015 American League East. Baltimore was third at 81-81, with Tampa Bay one game behind at 80-82. But the Orioles played three games that went 13 innings, going 2-1 in them. Erasing those games as 12-inning ties would drop their record to 79-80. The Rays played four games that lasted 13 innings (neither team played any games longer), with a 1-3 record. By making those games ties, Tampa Bay’s record becomes 79-79. So if games were declared ties after 12 innings, Tampa Bay would’ve finished ahead of the Orioles in the standings, with a .500 winning percentage compared to Baltimore’s .497. (In all cases, I determined standings by winning percentage.)

The list of every instance in which a league or division’s standings would have changed if there were 12-inning ties is a long one. As I said, in most cases, it’s not that significant. But I did want to point out the really interesting examples—the seasons in which 12-inning ties would’ve affected who played into October.

Here are the postseasons that would’ve been affected if baseball games were declared ties after 12 innings. In the interest of brevity, I’m going to limit this to league and divisional championships—no wild cards.

I’m not trying to make a point here. The chances of a rule change calling for games ending as ties after 12 innings are less than, well, extra innings starting with a runner on second base. But I thought Sawchik had an interesting proposal, one worth exploring. The conclusion is that calling games ties after 12 innings would change the overall standings in most seasons and, in the wild card era, would be as likely as not to have an impact on the teams playing in the postseason. But it’s not going to happen. I think.

The complete list of seasons in which the standings would have changed:

You need to be logged in to comment. Login or Subscribe
TroJim
Nice analysis. Baseball might, in fact, be improved if there were more tie games. But, intuitively, it seems that the interests of the fans and the integrity of the game are best served when a tie game is still a relatively rare event.

The only reason to shorten extra-inning games would be to improve the quality of these game themselves, not to shorten them for the sake of brevity. Ideally you would preserve as much of the integrity of the game as possible, which is why starting with a player on 2B is a not-starter for many of us. One option that could both shorten the game and improve the quality of play for spectators would be to allow each team to start the 10th inning with its full roster of 25 players. Players who got taken out earlier would be available again (until replaced). While this would adversely impact traditional baseball strategy, it would improve the offensive capabilities of the teams to score runs in extra innings. You wouldn't see as many runners stranded on 3B because the manager was forced to pinch hit with his best-hitting SP off the bench. He could bring his best runners and hitters back into the game at critical times.

I think "tie" might be a more beneficial solution to prevent marathon games, rather than just a long games. In my world, there could be role for tie after 14-15 innings but not 12. I understand that this is entirely subjective and the same arguments against a 12-inning tie can be used against it.


Reply to TroJim
mainsr
Right about extra-inning games being relatively uncommon and, as I pointed out in my last article on this topic, less frequent in recent years. And I agree that of the length-of-game complaints, I don't recall super-long games being an issue.
Reply to mainsr
newsense
"Baltimore was third at 81-81, with Tampa Bay one game behind at 80-82. But the Orioles played three games that went 13 innings, going 2-1 in them. Erasing those games as 12-inning ties would drop their record to 79-80. The Rays played four games that lasted 13 innings (neither team played any games longer), with a 1-3 record. By making those games ties, Tampa Bayâ€™s record becomes 79-78."

If you remove the 1-3 record for TB from their 80-82 record, wouldn't that make them 79-79?
Reply to newsense
mainsr
Whoops. Whose idea was it to put the 8 and 9 keys right next to each other? Typo on my part. Thanks for catching that. I'll get that fixed. Conclusion is the same.
Reply to mainsr
TroJim
Assuming 2 top teams in a division finish as follows:

Team B is ahead of Team A in the standings with a higher winning percentage. Does Team B officially win the division under the current rules? If so, what is your opinion regarding a need to revisit how MLB treats ties if the rules are changed to increase the probability of ties?

My thought is that it would be most fair to treat ties as a half win. In this case, Teams A and B would tie atop the standings, and the division winner would be determined by tie-breakers.
Reply to TroJim
TroJim
To answer my own question...the current process would probably not allow a game to end in tie if division title was at stake, but still something to consider if rules are changed moving forward.
Reply to TroJim
mainsr
I seem to recall seeing early season standings like this:

In other words, the team with the superior winning percentage leads.

Whether I'm correct or not, the solution, as you suggest below, is to allow ties only for meaningless games (like the Cubs-Pirates game I cited) and replay other ties (like the two for the 1965 Cubs that I cited).
Reply to mainsr
mdupske
It seems that the main reason to eliminate long extra-inning games is to 'save' pitching arms but with the endless churning of the 10-12 relief pitchers that already occurs, why not just let them play it out? Or teams could just pull a Tony LaGenius and give up around the 14th inning and put a position player on the mound and try to lose.
Reply to mdupske
mainsr
The problem is that there are so many teams with a whiff of the postseason, and the advantages the current setup confers to superior records, it's tougher to punt now, of course.
Reply to mainsr