On yesterday’s Effectively Wild, Ben and Jeff answered a listener email concerning Adam Lind’s fifth inning at-bat in the Mariners’ September 18, 2016 game, during which Lind appears to visibly fart. It looked like this:

Maybe there is a bit of dirt or chalk on his pants, and checking his swing shakes it loose. That could be. Maybe. Probably! But let’s just assume that Adam Lind farted. Adam Lind farting opens up some possibilities.

I don't want to admit to how much I have thought about Adam Lind's pants. He's a stranger, and he has (had?) all that weird facial hair. It seems kind of trivial and prurient to notice Adam’s pants, and to notice them with such intensity; it’s the sort of thing you don’t admit to your grandmother, or a potential employer, or your pastor. I’m not sure if men know about Spanx, a brand of women's shapewear. But I do know that there was some concern a few years back that, in the service of a trimmer waistline and other nonsense, wearing Spanx was literally squeezing women's organs.

These undergarments, and compression hosiery like them, are thought to cause serious health issues including nerve pain and gastrointestinal disorders and incontinence[1] and all sorts of other yucky stuff I won't discuss because it's uncomfortable (though not as uncomfortable as Spanx). What does this have to do with Adam Lind? Well Adam Lind wears some tight pants. He wears very tight pants, and he has for many years. I don’t know if they’re Spanx tight, but they merit investigation.

Here is Adam Lind wearing very tight pants while running fast and getting thrown out at home in 2013:

He has to rock forward to get up! How much of that is the disappointment of getting thrown out and how much is the pants? I can’t say for sure, but it seems likely it is at least 17 percent the pants. Physical impediments are harder to overcome with normal effort when we’re in a compromised emotional state. You don’t choose to look like a turtle on purpose, however briefly. Something keeps you on your back. Also, maybe you toot a little. 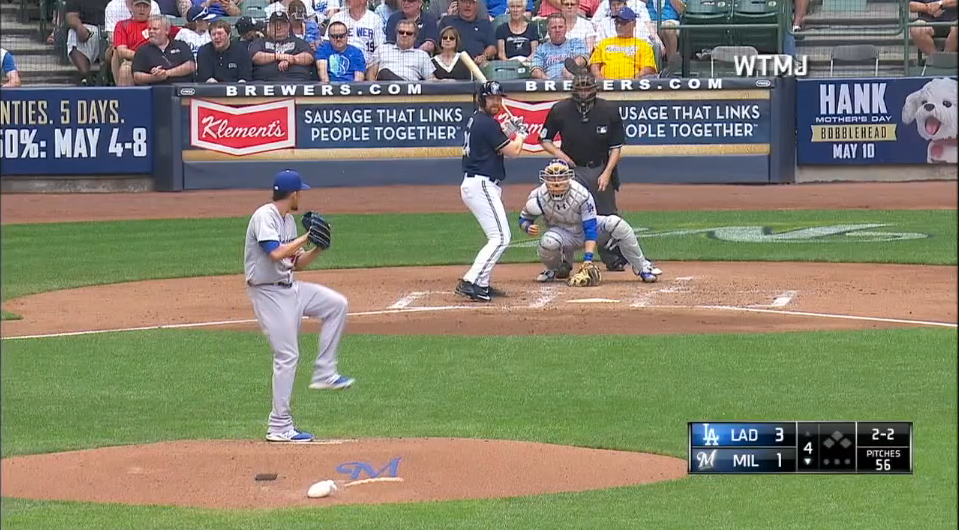 The pants don’t get in the way of the home run, but do you wonder, just a little, if he is trying to speed the Brewers to a win so he might take his pants off entirely.

And here he is catching a ball in foul territory in 2016:

His pants probably made him fall down! Too tight!

Here are the tweets of other people noticing Adam’s tight pants over the years, through stints with various teams, though none of them mention visible farts. Beginning in 2012:

Why are Adam Lind's pants so tight? that was a lot of running in pants that tight, my word.

Hey @Brewers I'm at miller park for my bday and would love to hear "tight pants" when Adam Lind walks up….#wouldmakemybday #prettyplease

I think Adam Lind's pants operated in the same way Spanx do, slowly sawing him in half, causing unusual gastrointestinal ailments that finally manifested in a fart forceful enough to expel chalk or dust or some such from the surface of his very tight pants[2]. Maybe there have been other toots, unremarked upon. Or maybe his Mariners pants were particularly tight compared to his other teams’ pants. Maybe these pants explain his .239/.286/.431 2016 slash line. Maybe the 20 home runs he hit were the only other possible byproduct[3]; very tight pants are so boom and bust.

I watched the first five innings of The Fart Game. I was looking for a place where Adam might have fallen down and picked up that chalk. I didn’t find it. He had a normal, upright day at first base. I did find a moment in the third when we seem to get a warm-up toot. Look closely.

This was Adam’s first day back after missing five games with a sprained right index finger. I assume he spent those five games in sweats. I imagine he is especially uncomfortable here. Maybe his tummy feels crummy. It’s like the first time you wear restrictive clothing in the fall. You’re certain you’re dying.

We arrive at the big moment in the fifth. Adam takes a pitch. Adam forcefully farts.

The placement of the afternoon shadows, the distance in the frame between Tony Sipp’s arm and Adam in the batter’s box, it all perfectly highlights the … moment. It could be other things, but it’s probably a fart. It ought to be a fart. When was the last time you saw a fart?

The funniest moment isn’t even the moment. The funniest moment is the moment after. I’m sure no one could hear it, because ballparks are loud and this has gone unnoticed until now. But someone saw it. I’d like to introduce you to a kid I’ll call Sean. Sean is sitting in very nice seats with his mom, just over the Hankook tires ad. Adam farts his fart, and Sean sees it.

It takes a moment to register, but then Sean shifts in his seat. Sean smiles and laughs. Sean and his mom exchange looks. He leans into her shoulder. Sean is effectively seeing a swear word. Nothing has ever been funnier. There’s another kid, we’ll call him Bobby, two rows up, who also seems to see it, because kids see everything. He gestures obviously to his dad. Bobby, you snitch. Sean knows to play it cool, though, because seeing a grownup do a bad thing is tinged with danger. Sean doesn’t want to get in trouble for seeing something he shouldn’t have. He knows about snitches and stitches. But Sean is also delighted. Those pants are so tight, they made him fart. He farted. That’s right, Sean. Adam Lind farted. Well, OK. Maybe he farted. We don’t know for sure. But let’s just assume he did.

[1] Welcome to our baseball site!

You need to be logged in to comment. Login or Subscribe
beckryac
This is why I subscribe. Amazing.
Reply to beckryac
nickpuntoforhof
Think about Adam Lind from Adam Lind's perspective for a moment. Think about the decades of hard work -- the blood, the sweat, the tears, the beating of the genetic odds, the years of minor league toil, the years of major league success. And all of this will ultimately lead to Adam Lind being remembered as the guy who wore tight pants, maybe farted twice, and probably farted once.

"Did he take a rip?"
"Well he didn't swing..."
"No, I mean *rip*"
"Well, his pants are intact..."
Reply to brandonwarne52
carlbrownson
This perfect article would have been more perfect if it had been filed, like the one above it, under "The View from Behind the Backstop".
Reply to carlbrownson
NatsGM
Bravo!
Reply to NatsGM
TyEstler
Fantastic, just fantastic. God I miss baseball
Reply to TyEstler