The offseason is an odd stretch of long road. There’s no baseball in the beginning and an annoying approximation of it at the end. Whatever treaty the horizon feigns with light, we still get up for work in the dark and go home in the dark; the sun is so indifferent to its friends this time of year. We get the flu, and are quite happy to retreat to the couch. It’s cold outside, and much comfier in here. We have ennui, and are a bit distracted. Those things are all true, and also, poor excuses for watching the wrong game by mistake.

Let us consider one of the offseason’s principal activities: consuming games that have already happened. Watching games when you know exactly how long they’ll last is disorienting. Imagine you’re driving to a music festival—you’re a young person—and you know some things about your trip (how long it will take to get there), but not others (the obstacles you’ll face). How and if you get jammed up along the way will materially alter your perception of your journey.

You’ll feel great flying down the highway; you’ll feel lousy looking for parking. You know a lot but also very little. It’s our act of faith whenever we leave the house. We know some things, but not others, and we just assume it’ll be OK enough. That faith is an essential part of the baseball that hasn’t already happened. The game could stink! It could go on forever! But we assume it won’t, even if we spend a lot of the offseason worrying it will.

I knew this game, the Giants playing the Yankees on July 23, was four hours and 25 minutes long per Baseball Reference. I knew I was home with flu-like symptoms, which was the only reason I had the inclination to watch the whole thing. I knew I was watching it because I thought it was a particularly long nine-inning game. I thought it was the longest such game of 2016[1]. I had faith that I knew what all my Play Index columns meant, so I didn’t ask questions.

“It is warm today, folks.” You suspect they are showing the thermometer in case they make one of those sticky afternoon mistakes, when you feel your skin becoming sweaty clay, and call Mac Williamson “Matt” or “Mitch” or “Mark.” I watched this game in January. I was not overly warm. I did wonder how this game would unfold, believing as I did that it was nine innings. 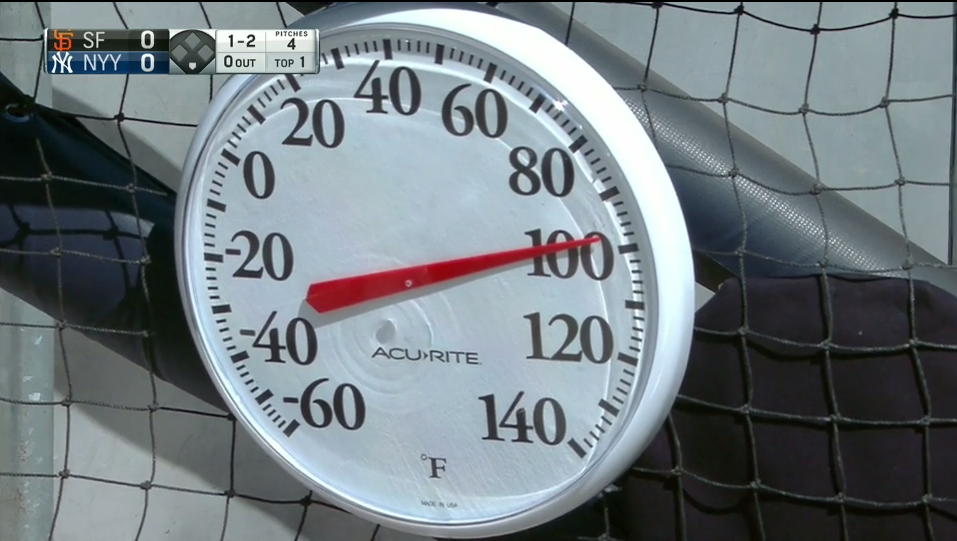 Ivan Nova and Johnny Cueto were the starters that day, and 11 minutes and 36 seconds into the broadcast the camera crew is shown sheltering under umbrellas. Hold tough, fellas. 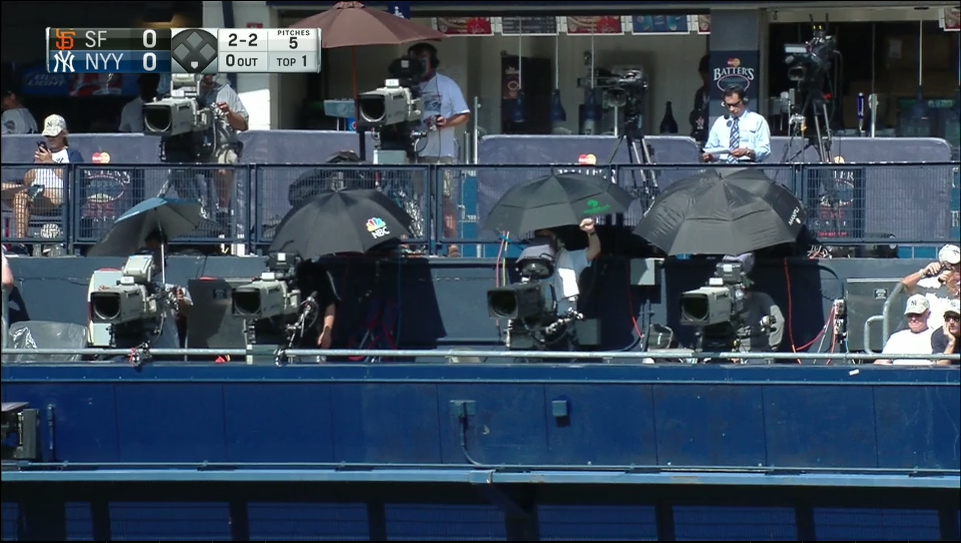 We think we know how the game is going to go based on that at-bat. It’s a long game, and a long at-bat. Perhaps everyone is going to play in a very smart but annoying way. Perhaps Denard is our guide. Because watching a game months after the fact, you’re looking for a guide. The outcome is already determined, but you don’t know how; chest congestion and general indifference has deterred you from finding out. Being surprised is exciting. What you know is how long it will go. Beyond that, you’re back at the music festival; you’re looking for a hirsute friend.

In the top of the second inning, Didi Gregorius throws out Mac Williamson at home, and my interest is piqued. Have we found our hero? 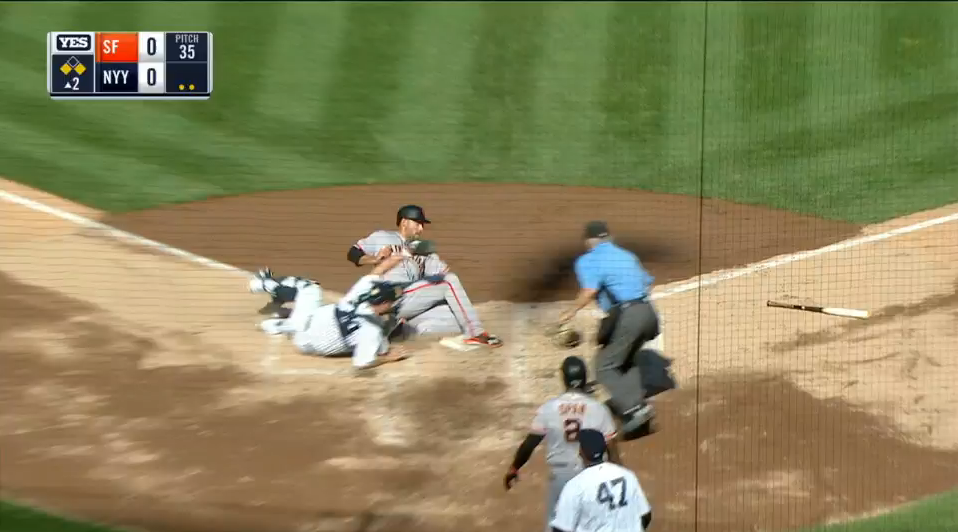 At the very least, they’re doing stuff. One of these teams has to score a run in order for the game to end, but too much scoring and we’ll be here all day. And we already know we’ll be here a while.

In the fourth inning, at one hour, 24 minutes, and six seconds, we are reminded again of the temperature, which seems a curious strategy.

This game is boring. You know that Buster Posey isn’t feeling 130 degrees as he steps into the batter's box, but goodness, should they be playing? It’s 130 degrees! How hot does it get on the surface of Mars? Is this close to that? The problem with a boring game is that you’re only one good excuse from leaving. At home, you’re only one full dishwasher from walking away. As the broadcaster, you want to give us the feel of the thing, but maybe you should lie a little bit.

Twenty-nine seconds later we get this look at Barry, the camera guy. “Barry, he’s a lonely man.” Poor Barry. And there’s an odd bit of truth to that because while Barry is surrounded by people, hardly anyone seems to be paying attention to him. We’re all just peeking out from umbrellas, hoping to make friends.

In the bottom of the fourth, Starlin Castro batted into a one pitch out—some of these guys were trying to go home. After that out, Cueto was at 70 pitches. Whatever temporary relief we think we got from a quick out is soon undone by the knowledge that this game is quite long and we’re bound to get relievers soon.

Gregorius singled and that brought Mark Teixeira up. Williamson let the ball get by him and Didi scored from first.

It’s embarrassing, but at this point Williamson has cemented himself as our guide, and our friend, and the game’s MVP because he has cost the Giants a run both ways. He’s doing a service. We know we’re going to be here a while but Williamson allows us to think we won’t be. Like being in the ballpark, the run lets us think this will resolve quickly. I was quite stuffed up, and unable to move either way, but it was nice to think about.

At least, until we got to the top of the fifth, and Mac remembered his family was there. He’d had 87 plate appearances going into that game, hitting .237/.333/.474. He had five home runs. And sure enough, he smacked a home run to left field. Our guide betrayed us; he took us off road. The Giants' travel club went wild. After all, they had nowhere else to be. They came here for this. 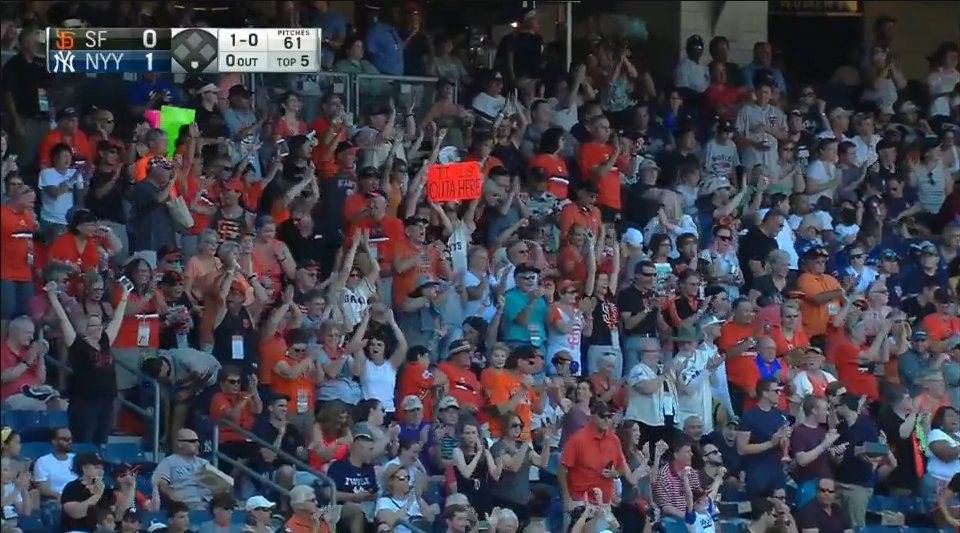 Heading into the seventh inning is when you normally start thinking about traffic. Are there other things happening around town or just this? I wasn’t thinking about traffic, but I was beginning to wonder. The sixth just ended, and I was only two hours and 15 minutes in. This game is going to go 4:25. This game is going another two hours? Then the top of the seventh took five minutes. Wait. Mac? “God Bless America” took about a minute, and then we were into the bottom of seventh.

The eighth inning begins, and Andrew Miller trots out from the bullpen and it dawns on me. I would remember this. Something is wrong. If Andrew Miller and Dellin Betances and Aroldis Chapman had combined to throw a very long stretch of relief in the longest nine-inning game of the year and then blew a save, I would remember. We would have talked about it. So why don’t I remember this? That is when I finally checked the box score and realized my mistake. This game went 12 innings. This was not the longest nine-inning game of the year. This game wasn’t nine innings at all.

A person could react a few ways, I suppose. I could have been mad that I assumed I knew what my data meant or didn’t look at the box score earlier. I could have felt those things, but I just felt baseball. For the first time all offseason, amidst the ennui and dark and distraction, through the flu, I felt baseball. I had expected this game to go nine innings; I had expected my faith to hold. But it didn’t. Baseball did what it wanted, at a time of year when it normally doesn’t do anything at all.

I delighted in the 10th when Mac Williamson made a tough catch over a fan in foul territory. Look at him trying!

And when he hit a go-ahead single to score Trevor Brown, I felt like I was in the Giants’ travel club. They got their money’s worth, and quite unexpectedly, so did I. 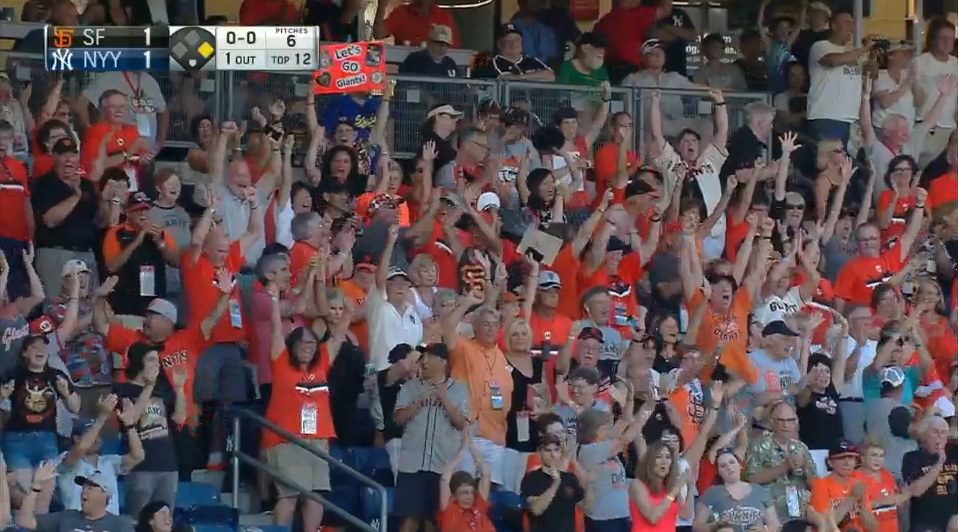 Baseball observes all kinds of time. We mark time by plate appearances. It took Mac Williamson 2,285 plate appearances to get to the majors, or about three years. This game took four hours and 25 minutes. It was measured in those minutes, and Mac’s .240 WPA, his second-best win probability added all year. His remaining time was marked by a series of less-good performances; his previous time was marked by the seconds it took for a scout to look from the field to his notepad and declare Mac an OK-but-not-great prospect with power. Or maybe his time was marked by the long hours of rehab as the odd position player to fight back from Tommy John surgery.

In the postseason, the Giants played a 13-inning game to stay alive against the Cubs. We could measure that time in how long it took the gulls to came in from the bay, assuming we were polite enough to stop playing baseball at 11 pm. The Giants' season ended on October 11, 2016. It will take 172 marks in the calendar before they take the field again on Opening Day. We know a lot about baseball time and we’re often annoyed by it, which is perhaps why the commissioner is so concerned with managing it. We know a lot and we know even more in the offseason, when wins are long decided and the heat of summer is faded.

We don’t tend to mark that time in units of surprise, in delight at an unknown thing. We’re much more sure. Except when we make mistakes and are on the game’s time. We follow a guide and end up in extras. We know the outcome, but an already hazy journey enters uncharted territory. I didn’t know what spending 12 innings with Mac Williamson would be like, but I’m glad I did. It felt spontaneous, despite being bounded. It felt surprising. In a long offseason, it felt like baseball.

[1] It wasn’t, though I did write about the one that was