You may have seen that Chris Carter’s agent, Dave Stewart, threatened that the 2016 National League co-home run leader might play in Japan this season. (He wound up taking his two-and-a-half true outcomes to The Bronx.) That story made me think of something I’ve wanted to write about Dave Stewart. But before I can do that, I need to tell you about something else.

That something else is the 1988 season. A lot of things happened in 1988. The Iran-Iraq war ended. The Soviet Union (still a thing back then) initiated perestroika and withdrew from Afghanistan. George H. W. Bush defeated Michael Dukakis in the presidential election. And the first internet worm appeared.

In the baseball world, there are two indelible memories of 1988. One is this:

The other is the emergence of what’s commonly referred to as “the modern bullpen,” featuring a closer whose responsibility is to pitch the ninth inning only, in save situations only. It was pioneered, ironically (given the video above) by the Oakland A’s, with manager Tony La Russa deploying Dennis Eckersley in ninth-inning save situations.

Now, there are a lot of ironies in those two highlights. First, the pinch-hit homer in the first game of the World Series was Kirk Gibson’s only at-bat in the series. Hobbled by hamstring and knee injuries, the National League MVP hit only .154/.233/.385 in the Dodgers’ 4-3 NLCS victory over the Mets after batting just .242/.350/.348 in the season’s final month. He watched all but that one plate appearance of the Dodgers’ 4-1 World Series victory from the bench.

Second, it wasn’t all that clear in 1988 that La Russa and Eckersley were changing the way the ninth inning would be played going forward. Eckersley led the majors with 21 one-inning saves in 1988, but that wasn’t a record. Cincinnati’s John Franco had 24 one-inning saves the year before. (Somehow, the trend-setter was the closer for the 104-58 1988 A’s rather than the 84-78 1987 Reds.)

Additionally, during the La Russa/Eckersley seasons of 1988-1995, the A’s led the majors in one-inning saves only once, in 1988, when they had 22—one more than the Twins, two more than the Reds, three more than the Astros, and four more than the Brewers and Pirates. It’s not like they were a dramatic outlier that pulled everybody else up. And the whole narrative of the A’s bullpen in 1988 doesn’t check out: Eckersley had 45 saves, of which fewer than half were of the one-inning variety. He had 16 saves of more than one inning and eight of less than an inning to go with his 21 one-inning saves.

Nonetheless, Gibson’s pinch-hit home run and the emergence of the modern bullpen are the two major takeaways from 1988. But those are retrospective takeaways. We didn’t know about Gibson’s homer until it occurred on October 15. And it took several seasons before we all realized that bullpen usage had changed for good.

So in the moment, during the 1988 season, the story wasn’t Gibson’s game-winner. Nor was it La Russa’s usage of Eckersley. Those weren’t the topic of conversation throughout the 1988 season. No, 1988 was the Year of the Balk. 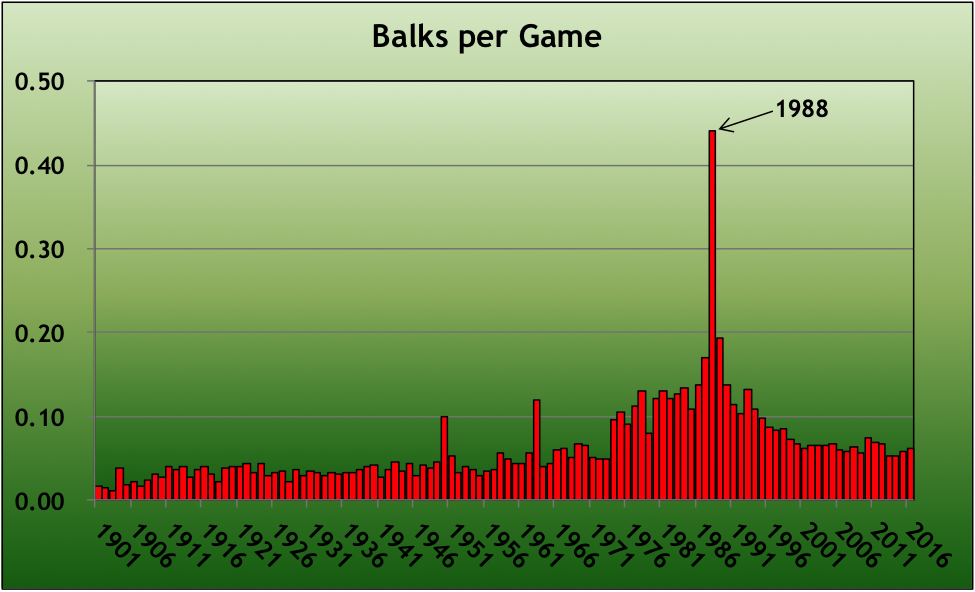 By "game" above I mean two teams, from the moment the umpire says, “Play ball.”

If you sat through a game in 1988, you saw on average 0.44 balks. That’s one hundred and twenty-seven percent more than in any other season in baseball history. Fittingly, there were two balks called in the 1988 World Series, or 0.40 per game. The story of the Year of the Balk is illustrative of the errors the sport can make—specifically, an honest mistake compounded by stubbornness—as well as its ability to learn from its missteps.[1]

8.01(b): The pitcher, following his stretch, must (a) hold the ball in both hands in front of his body and (b) come to a complete stop.

… was changed to this (revised wording italicized):

8.01(b): The pitcher, following his stretch, must (a) hold the ball in both hands in front of his body and (b) come to single complete and discernible stop, with both feet on the ground.

The balk has long been one of the most inscrutable rules in baseball. Ron Luciano, an American League umpire for 11 years, famously said: “I never called a balk in my life. I didn’t understand the rule.”

The blips in the chart above prior to 1988 represent various attempts by the National League to crack down on balks. (The American League was more indifferent, it seems.) In 1958, NL umpires called 38 balks, more than double the 15 called the year before, but the trend didn’t hold. Nor did it following 1963, when balks in the Senior Circuit more than tripled, from 48 to 147. And after 1974, when NL balk calls nearly tripled again to 140 from 52 the year prior, the level didn’t fall off.

But that didn’t mean everyone was satisfied with balk calls. Supposedly, the 1988 rule change came about following Whitey Herzog’s complaints about the Twins’ pitchers—specifically Bert Blyleven—in the 1987 World Series, when Herzog insisted blatant balks weren’t being called. Baseball’s Rules Committee added the “discernible stop” clause to the balk rule prior to the 1988 season.

You’d think somebody might’ve noticed that things may be off a little when, in a spring training game in March 1988 between the Rangers and Blue Jays, there were 12 balks called in one game, including nine against Rangers starter Charlie Hough. If nine balks sounds like a lot, it’s because it is: From 1901 to 1987, there had been only four seasons in which a pitcher was called for nine or more balks: Steve Carlton in 1979 (when he set a record with 11), 1982 (9), and 1983 (9); and Hough in 1987 (9). So Hough was called for as many balks in one spring training game as he had in the entire prior season, when he set an American League record.

Actually, it’s not fair to say “somebody might’ve noticed,” because that players certainly did. The union began complaining about excessive balks during spring training, but nothing changed. The New York Times’ Murray Chass[2] reported that the Rules Committee, after assuring the players that the new rule wouldn’t have a meaningful impact on the game, rejected the players’ proposal to treat the new balk rule as a one-year trial.

It’s also worth noting that in 1988 owner-player relations were near a nadir. The players had gone on strike for two days during the 1985 season and, in 1990, the owners would lock the players out for over a month during spring training. The owners had just lost a ruling over collusion that occurred after the 1985 season, and the players had filed grievances over alleged collusion after the 1986 and 1987 seasons as well. (They would win both, ultimately collecting $393 million in total damages for the three collusion years.) Compromise wasn’t the word of the day.

And, then, despite the owners’ insistence that the rule wasn’t a one-year trial, it was. The following January, the Rules Committee met and, in the words of the Associated Press, “the balk rules that bogged down baseball last season have come to a discernible stop.”

Lessons? The new balk records are unassailable. Only 20 pitchers have had nine or more balks in a season. The 1988 season accounts for 14 of them, including 11 of the top 13. No pitcher has had more than six balks in a season since 1993. The Giants had the fewest balks in the majors in 1988, 22, and no team’s had that many in 20 years. The general shape of the chart at the top of the article is not likely to change.

But baseball, to its credit, learned from its mistake. Prior to the 2014 season, the Rules Committee, again trying to clarify an ambiguous rule, interpreted “secure possession” of a ball following a catch to include the transfer of the ball to the throwing hand. As a result, if a fielder caught the ball but dropped it while transferring it from his glove, it was ruled a non-catch. Like the balk rule, the implementation of the “transfer rule” was a mess, with batters reaching via error on balls that in the past would’ve been outs. But unlike the season-long barrage of balks in 1988, the new interpretation of the transfer rule lasted all of 25 days. The morning of April 25, after consultation with both the MLBPA and the umpires, MLB reversed the transfer rule. The legacy of the Year of the Balk is not only indelible records, but also an increased willingness to not repeat mistakes.

[1] From this point forward, this article drew heavily from “Balks: The Story of the 1988 Major League Baseball Season,” posted on August 11, 2008 on Recondite Baseball (reconditebaseball.blogspot.com).

You need to be logged in to comment. Login or Subscribe
murber74
Great article!
Reply to murber74
mainsr
Thanks!
Reply to mainsr
newsense
" In 1958, NL umpires called 38 balks, more than double the 15 called the year before"

1958 was a blip as well; NL balks in 57-58-59 were 15-38-24. But you're correct, 1950 was more pronounced.
Reply to mainsr
jfranco77
I really, really wish that Sam Miller had been writing for BP when a pitcher got 9 balks called against him in a spring training game.
Reply to jfranco77
mainsr
Amen
Reply to mainsr
collins
I agree that the transfer rule was a bad one, but why is it bad to have a balk called nearly every other game? I think that might make the game more interesting and would juice the running game a bit.
Reply to collins
mainsr
It might've worked out that way over the long term, but there was mostly confusion in 1988. Runs per game fell from 4.72 in 1987 to 4.14 in 1988, the lowest non-strike-season runs per game in a decade, and even stolen bases declined. Weird season.
Reply to mainsr
worldtour
Ugh, Murray Chass.