By now, we should know not to freak out over some of the things that MLB commissioner Rob Manfred says. There isn’t a pitch clock. He hasn’t banned shifts. Calm down. Deep, cleansing breath. And another. Inhale slowly, exhale slowly. Feel better now? Good.

OMG THEY’RE GOING TO PUT A RUNNER ON SECOND BASE AT THE START OF EXTRA INNINGS!!

Well, OK, it’s only in the rookie-ball Gulf Coast League and Arizona League this summer. And it’s only an experiment. And the force behind it appears to be chief baseball officer Joe Torre, not Manfred. But let’s freak out, by all means!

Why doesn't MLB use the extra inning format they tested? Have the teams play until the commish is sleepy or bored and call a tie.

Another kill-two-birds-with-one-stone extra innings solution: If home team's crowd did the wave during the game, the home team loses.

A person might ask, “How big of a problem is this?”

I’m going to answer this two ways. First, the easy/snarky answer. Torre said, “It’s not fun to watch when you go through your whole pitching staff and wind up bringing a utility infielder in to pitch. As much as it’s nice to talk about being at an 18-inning game, it takes time.”

While reasonable people can disagree about the inherent fun-ness of watching a utility infielder pitch, let’s consider the second of Torre’s sentences. While conceding that an 18-inning game does, in fact, take time, how frequent are they?

Well, here’s a graph showing the frequency of 18-inning (or longer) games since 1998, when the addition of the Rays and Diamondbacks gave us 30 teams. 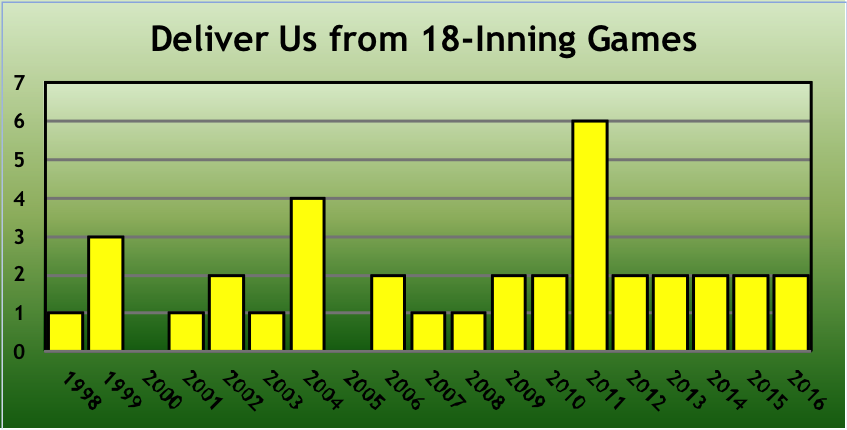 Yep. Two games per season in each of the past five seasons. Sorry, patrons of the July 1 Cleveland at Toronto game (in which two utility infielders, Ryan Goins and Darwin Barney, pitched) and the July 17 Pirates at Nationals game (boo, none), your suffering doesn’t make for an epidemic.

But yeah, I’m being a jerk, picking on Torre for throwing out that 18-inning phrase. Let’s look at extra-inning games in general: How often do they occur and how many innings do they entail? 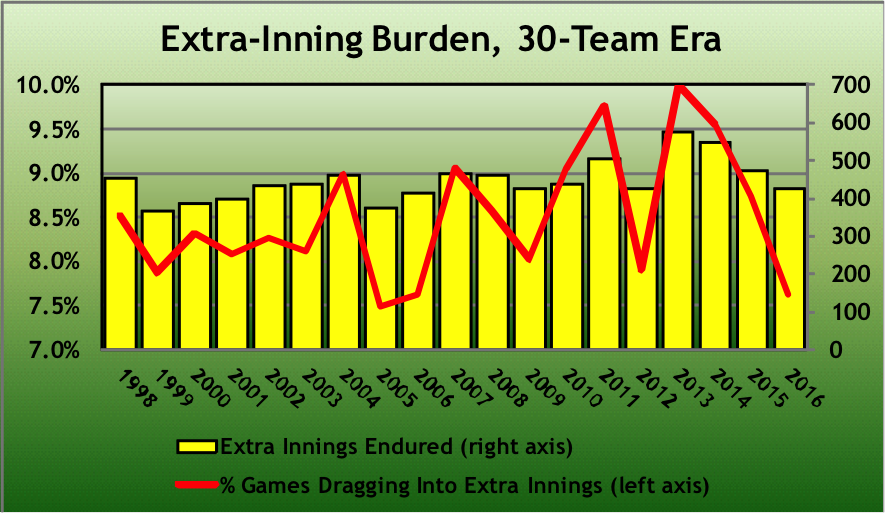 Granted, that doesn’t negate Torre’s argument, since he didn’t base it on a rising tide of extra-inning games. But it’s odd, isn’t it, to be talking about this when games lasting more than nine innings are at a nadir?

You need to be logged in to comment. Login or Subscribe
jfranco77
If there was no chance of this filtering up to the high minors, or even the majors (heaven forfend), would this be a terrible idea? Do you really want your 18 year old complex league players playing a 19 inning game? Don't most of those games just end in a tie when the managers agree to end the game anyway?
Reply to jfranco77
mainsr
Yeah, if it stays in the rookie leagues, who cares, and you raise a good point about how they mess with the rosters and player usage there anyway. I thought Torre's comments implied a possibility of it going higher.
Reply to mainsr
draysbay
I'd like to see something where the 10/11th innings are left alone, but the 12th starts with the last out from the preceding inning on 1B, then start him on 2B in the 13th, and on 3B in the 14th. Ten or eleven inning games aren't the issue. It is when teams get into the 13th plus inning where they are running out of arms and you begin to see the silly stuff.

There is no reason that a team should have to wholesale sell out a coin flip game that counts just as much as the next day's game. Once you get into the playoffs remove this rule. Teams have more off days, and are more likely to be facing the same opponent the next day.
Reply to draysbay
mainsr
I understand your point, but to me, that's a problem with roster construction. If you've got seven or eight arms in your bullpen, at least two or three should be capable of giving you four innings, it seems to me. If you're running out of pitchers in the 14th, I'd say that's a roster construction/bullpen management issue, not an inherent problem of extra-inning games. But that's just me.
Reply to mainsr
draysbay
Anybody that manages a game on the basis of, "what if it goes 14+ innings" should be fired on the spot. Sometimes it does.
Reply to draysbay
Deadheadbrewer
Anything to speed up games and end them sooner is just fine with me, tradition be damned. I don't enjoy the situation where I've allowed the kids to stay up to watch a baseball game, and now, after three hours and twenty minutes of baseball, it's 10:25 p.m., and we're about to go to extra innings tied 3-3. Nobody would have to "fix" extra innings if those extra innings started two hours and thirty-five minutes after the first pitch.
Reply to Deadheadbrewer
mainsr
Right. I don't think extra innings, which, as I said, occur in a single-digit percentage of games anyway, are what's making the games so long.
Reply to mainsr
mattyjames1
What I don't see discussed too much is the scenario where both teams score in the 10th and you're forced to play 11 anyways.
When both teams have an advantage isn't there really no advantage?

But yeah, I'm more open to messing around with the 12th inning than the 10th and it's only to end the game, not to save time. (so maybe we should be OK with ties?.... maybe. I'm just throwing this out there)
Reply to mattyjames1
mainsr
Hey, we had a tie in 2016 (Sep. 29, Cubs at Pirates, 1-1, called in the sixth) for the first time in 11 years and the world kept spinning.
Reply to mainsr
mainsr
The always-brilliant Sam Miller tweeted today: "Under the new extra innings rules a starting pitcher could throw a complete perfect game and lose."
Reply to mainsr
jnossal
I'm not exactly opposed to the existing system, but starting the last out on 2B in the 10th and 2B and 3B in subsequent innings wouldn't bother me in the least.

Youth leagues use this rule to more quickly resolve tie games. It doesn't alter the integrity of the game a bit in my opinion.
Reply to jnossal
Worthing
Do you bring in the closer in the top of the 9th in a tie game or wait to use him in the top of the 10th with a runner starting on 2nd or the top of the 11th with a runners starting at 2nd and 3rd?
Reply to Worthing
mainsr
Worthing, I think you just vindicated Buck Showalter's bullpen usage in last year's Wild Card game. He was presciently saving Britton!

Kidding aside, you make a great point. This will create a new stathead vs, guys on the field fault line, potentially, regarding optimal bullpen strategy.
Reply to mainsr
mhmckay
This is going to sound like an even more heretical idea, but ... what's wrong with a tie? Take a lead from the NHL (wow, another heretical concept) -- play an extra inning, or two with "advanced baserunners" (or fewer fielders!). And -- you're over. PS -- as hockey does, go back to "play until there is a winner" rules for the post-season (when days off mitigate the run out of relievers problem)
Reply to mhmckay
mainsr
You've given me a great idea. Thanks.
Reply to mainsr