A good introduction for articles like this is a descriptive paragraph. The reader gets a nice little piece of prose, maybe a good simile or two before you drown them in heat maps, while potential critics get warned that the author does, when absolutely necessary, watch the games. Maybe there’s a Bradbury sentence about the sunshine, some flecks of historical context. A reference to the living crowd. The author picks a particular play or scene that transitions well into his or her narrative, applies paint to the brush, and has at it.

It doesn’t work this time, because the subject of this article is Cole Hamels. Cole Hamels resists description. You watch him pitch, watch him pull up his long right leg and fall forward, hoisting a curve near the plate, getting the third strike, and then sauntering to the right. Hamels highlight reels feature a lot of sauntering. There’s nothing actually distinctive about how he works, no superlatives to apply, nothing really to remember. Just pitches, and outs, and saunters. Hamels has made a career out of consistency, stringing a career of continual borderline greatness into a borderline Hall of Fame path.

The 32-year-old Hamels had, in 2016, one of his finest seasons by DRA, leading the Rangers to a surprising domination of the AL West. Despite some late-season struggles, including an unfortunate ALDS implosion, the end result was more of the same: 200 innings, 200 strikeouts, just what one would expect, and would expect forever. So naturally, PECOTA lists him as having the highest collapse rate (the odds of a player declining in performance by at least 20 percent) among starting pitchers heading into 2017.

Given that there’s nothing more beloved or timeless on the internet that being pessimistic about Cole Hamels, let’s at least try to figure out why PECOTA’s being such a jerk. We can start with the basics:

OK, so those were the boring reasons. But we’re not talking about 1981 Mike Norris coming off a career year or anything; PECOTA projects Hamels to post a 3.80 DRA, which would be his worst since the subprime mortgage crisis.

For more answers, let’s turn to the tape, in this case a postgame interview following an eight-inning, one-run dismantling of Your World Champion Chicago Cubs:

This is a very good interview. It is also full of lies.

The bottom-left section is for kids and closers, the ones who just rear back and try to blow it by. Hamels, being neither, is very, very interested in that upper-right quadrant. That’s where you get the best results, from the defensive side: the pop ups, the chopped ground balls, the half-hearted bat waves. “Sometimes you get a little carried away because you know guys are going to swing,” he said. “Sometimes you try to avoid contact.” Hamels has been getting a little carried away for a couple years now. 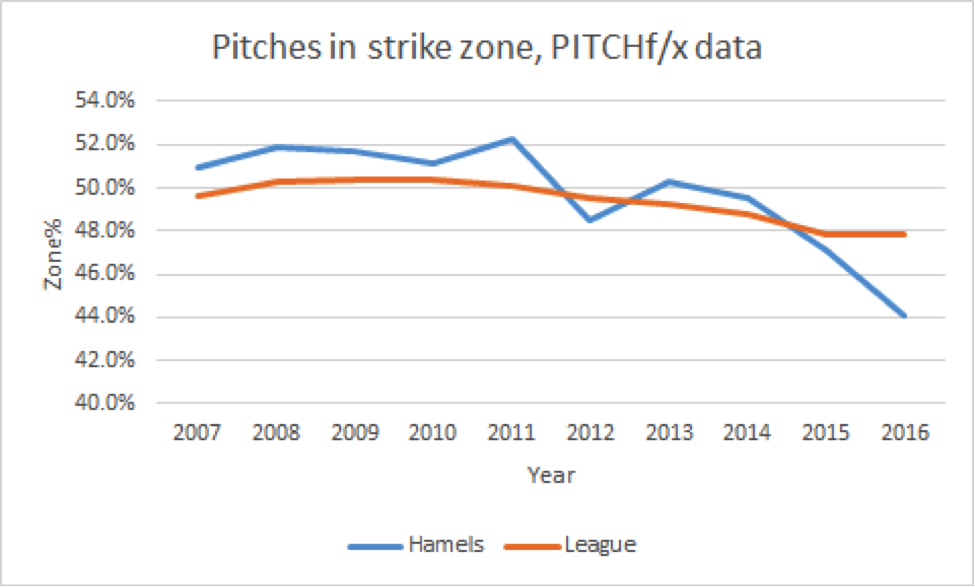 Your pitch-tracking method of choice may vary, but regardless Hamels was among the league leaders in 2016 at pitching outside of the strike zone. Fortunately for him, he was also among the leaders in a different stat: 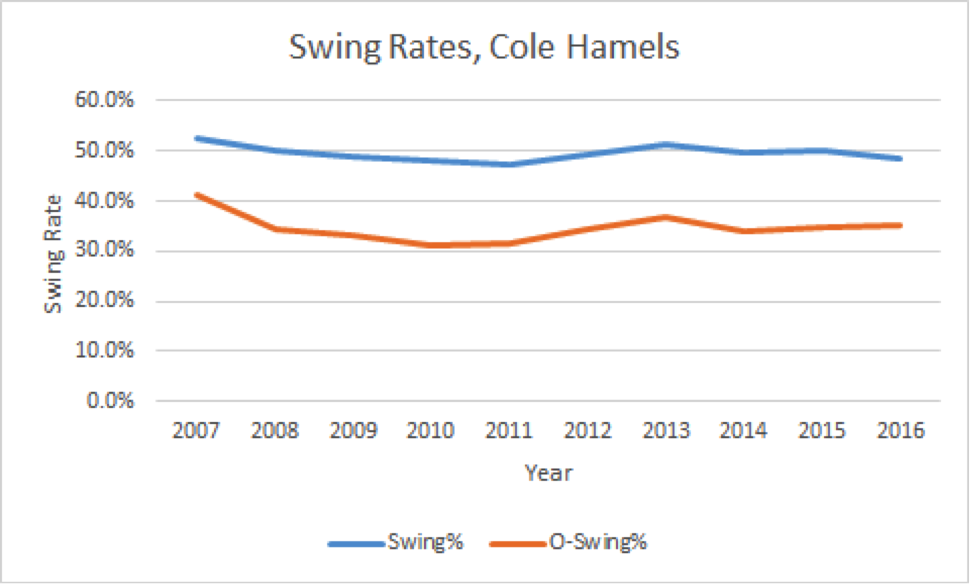 Living over the edge hasn’t caught up to Hamels yet; hitters are still swinging as much as ever, even as they’re getting less and less to swing at. It’s a slight trend league-wide, as O-Swing% has been crawling upward for years, but the Rangers’ ace is very firmly at the head of it. This lifestyle comes at a cost, however; while his pitch selection strategy has helped sustain his strikeout and ground-ball rates, it’s also driven his walk rate to a career high. Hamels was able to pitch around the damage last year, as all those extra baserunners didn’t really equate to extra runs. But it’s a dangerous game.

Later in the interview, Hamels said, “If you can go out, and really establish the strike zone early, I don’t think they can get as comfortable.” And that’s the key, of course; it’s not as necessary to throw strikes all the time as it is to get into pitchers' counts. It’s that first strike that counts the most: the league hit .272/.383/.458 after ball one and .226/.268/.355 after a first strike.

So is this part of the grand plan? Has he taken context into account when throwing off the edge of the plate?

If there’s a trend here, it’s not the one you’d expect; rather than moving off the plate with two strikes, Hamels seems to be more likely to do it with two or three balls in the count. Perhaps this belies streakiness more than strategy, but either way it’s a cause for concern. Perhaps this is why PECOTA seems grouchy; it sees the command issues as real, and the strand rate as untenable, while his O-Swing% is already about as good as one could possibly hope for.

The result is still a fine pitcher; we’re not talking about 33 starts at ALDS-level. But there are more ways for things to go wrong than right. Of course, maybe Jonathan Lucroy rediscovers his framing magic and batters are left with no choice but to flail at cutters below the knee. Maybe Hamels polishes the approach and sacrifices a few eventual strikeouts for a few more strike ones. Maybe, if things get too out of hand, Hamels ditches the strategy altogether and focuses on pounding the bottom of the zone. Maybe the Rangers win 95 games again and no one really worries what might be wrong with Cole Hamels. Anything is possible. But it’s Hamels, so the best bet is that he’s back to his usual place, good to great, just like always.

You need to be logged in to comment. Login or Subscribe
ddietz2004
Reasonable. However, Hamels ERA has beaten his FIP six of the last seven seasons. Perhaps it finally catches up to him.
Reply to ddietz2004