In this series, we’re investigating the outcomes when baseball players made what appear to have been New Year’s resolutions to do something differently in 2016. But unlike the rest of us, who resolve to get a new job or limit the time we spend on Facebook, we’re looking here at specific baseball outcomes.

As I explained in the last article, there’s a problem with defining plate discipline. For hitters, we can look at how frequently a batter swings at pitches in the strike zone (Z-Swing %) and avoids swinging at pitches outside the strike zone (O-Swing %) as indicators of plate discipline. The opposite is true of pitchers, as it would seem that the best pitchers fool batters into not swinging at strikes and get hitters to chase pitches outside the zone. But neither is a perfect measure.

Among pitchers with at least 60 innings pitched in 2016, Andrew Miller, Rich Hill, and Kyle Hendricks were in the top 10 for lowest Z-Swing %. But so was Doug Fister, who’s looking for work after a 4.64 ERA and 5.34 DRA. At the other end of the spectrum, the highest Z-Swing % last year was 74.5 percent by Oakland’s Zachary Neal, who had a 4.24 ERA and 5.57 DRA (and was just designated for assignment), but the second-highest was Kenley Jansen’s 72.5 percent.

Same with O-Swing %: Miller, Zach Britton, and Noah Syndergaard were among the leaders at inducing batters to chase, but so was the disappointing Zack Greinke. Miami’s David Phelps, who had a 2.28 ERA and 2.85 DRA, had the lowest chase rate, while the ironically-named Chase Anderson had the fourth-lowest O-Swing %, and it netted him a 4.39 ERA and 5.66 DRA.

Does that mean Osuna is below average? No, it does not. But we can say that since his Discipline Index was 37.5 percent in 2015, he improved in 2016. That’s what we’re looking for: Pitchers whose Discipline Index improved (or got worse), indicating greater success at getting batters to refrain from swinging at strikes, to chase pitches that would’ve been called balls, or both.

Who were the leaders? Which pitchers (minimum 60 innings in both 2015 and 2016) resolved to improve their plate discipline in 2016 and stuck to it?

As a group, they did better, and they collectively beat their PECOTA DRA projections as well. Eight of the 10 were better in 2016 than in 2015. And the average drop of eight points in DRA- is pretty good. But note that the average improvement can be characterized as pitchers who went from below average in 2015 to almost (but not quite) average in 2016.

That’s probably what we’d expect. With the odd exception of Cody Allen, none of these pitchers were better in 2016 than in 2015, and several were quite a bit worse. They also underperformed their projections (and would have by more if somebody had told PECOTA that Raisel Iglesias was going to move from the rotation to the bullpen, where he compiled a 1.98 ERA over 50 innings).

As I’ve done in the other articles, I’m also going to look at all 175 pitchers who pitched at least 60 innings in both 2015 and 2016. I’ve divided them into identically-sized deciles and calculated the weighted average change in Discipline Index and DRA- for each decile. Here’s how it looks: 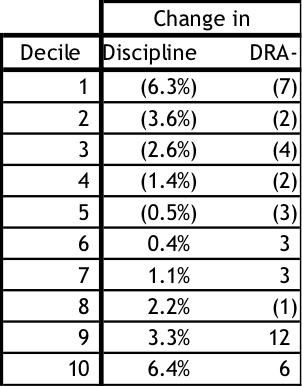 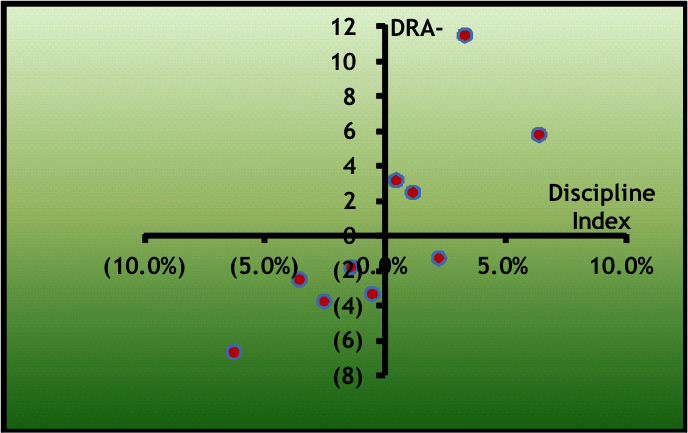 This relationship warrants the same caveat that I’ve used with other graphs: For most pitchers, the changes are pretty negligible. Only 57 pitchers out of the 175 in this study changed their Discipline Index by more than 3.3 percent—that’s the difference of one swing for every 30 pitches thrown—from 2015 to 2016. But at the extremes (in this case, the first, ninth, and tenth deciles), the differences are quite pronounced. Pitchers who markedly improved their Discipline Index were, on average, a good bit better in 2016 than in 2015. Those whose Discipline Index markedly deteriorated were a good bit worse.

The question here, though, is how much a pitcher can control the frequency with which batters swing at their pitches. That’s dependent on a number of factors, including location, sequencing, and repertoire. Consider repertoire. The three pitchers in the top 10 for improved Discipline Index who had the largest improvement in DRA- were Brad Hand, Adam Morgan, and Julio Teheran. All of them changed their repertoire in 2016.

So for pitchers, it appears that while improving plate discipline does generate better results, it takes more than just a resolution. It’s likely the result of a more fundamental change in overall approach. And, like resolving to go to the 6:00 am Pilates class every Monday, Wednesday, and Friday, that can be a pretty daunting challenge.

You need to be logged in to comment. Login or Subscribe
ddietz2004
This same stat was mentioned in a Hardball Times Annual piece a couple of years back. Except the author referred to the stat as Gap percentage. If I remember correctly, it sort of hinted at breakout potential the following season for those that improved, but I could be wrong. Anyways, good work on this series.
Reply to ddietz2004
mainsr
Ah, THAT'S where I remember it. Thanks! I mentioned in the last report that I remember seeing it--it's not an original idea--but I couldn't remember where. Thanks for having a superior memory to mine. And I'm glad you like the series! Not done yet...
Reply to mainsr