As the public ballots have run past our vision like newspapers off the press in the montage of an 80s movie, there’s one trend that catches the eye: the Lee Smith/Trevor Hoffman combination. Seventy-two voters as of this writing have publicly given a final show of support for Lee Smith, former saves record-holder. And 68 of those spent a second vote on the man who surpassed him, Trevor Hoffman.

This equals the amount who also voted for Tim Raines, who has better than 15 percent more support overall and exceeds the 63 votes for Jeff Bagwell, the other clear winner from this year’s class. Forget that in terms of specialization, they put designated hitters to shame: People who like closers really, really want there to be more closers in the Hall of Fame.

Here’s a reflection of Smith’s decade and a half on the ballot:

One could argue that Smith’s waning support comes from a shift in the electorate, or alternately that he’s been the victim of the 10-man limit. One could also argue, just as easily, that if not for the 15-year rule he’d be getting the same 30-40 percent until the fall of civilization.

Though Hoffman reached the 600-save plateau—and with more than double Smith’s support, will almost certainly be elected in the coming years—one could make the argument that the latter was the superior reliever. In fact, all three of the major WAR(P) statistics narrowly do just that, based on era adjustments that Hall of Fame voters are thoroughly immune to. But this is probably more of an indictment on Hoffman than it is a boost for Smith, proof that despite Hoffman’s gaudy save totals he’s a member of a group of fine relievers, names like Fingers and Gossage and Sutter, but also like Billy Wagner and Doug Jones and someday Francisco Rodriguez, rather than as an elite above them. This will ultimately prove as damaging to Hoffman’s legacy as it did for the first three relievers named.

There isn’t an obvious pattern to the closer-lovers: of those 72 Smith votes, 17 voted for old-fashioned candidate Fred McGriff (24 percent, versus 16 percent overall), and 38 for Bonds (53 percent, compared to 63 percent), but also 44 for stat-preferred Edgar Martinez (61 percent, compared to 65 percent). It’s a segment of the population that is perhaps more conservative than the group as a whole, especially as the voting ranks have been rotated in recent years, but can’t be dismissed as purely luddite.

A breakdown of every major candidate, and the average number of players included in ballots that also included that player: 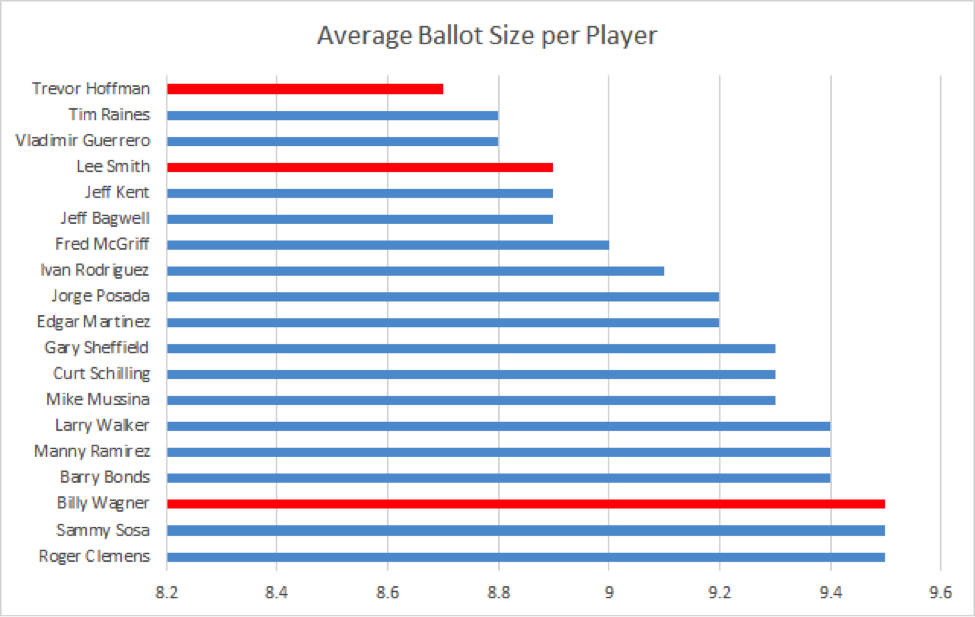 So we can’t just dismiss reliever-favoring voters as being anti-sabermetric voters. There’s some deeper appeal to the vocation that doesn’t translate to wins above replacement: Trevor Hoffman’s 26.6 career WARP lands him squarely between starters Chan Ho Park and Mark Portugal. Those limited, high-leverage innings are important to us; they confer the heroic sense of clutch-ness we’ve had stripped of our hitters, and provide us with that ethereal sense of heroism.

The problem is that the game has changed, but not in a way that can be converted with a mere league-adjusted stat or a lazy comp to one’s own peers. The dawn of the modern reliever has seen an adjustment to how the star reliever is employed, narrowing his limited innings to those most valuable to the ballclub, the highest possible leverage. This is fine; as Russell Carleton noted, the expanded role of relievers demonstrated this postseason isn’t practical over 162 games, and Hoffman’s 1,089.1 career innings probably aren’t far off of what could be asked of him. But the credit of that improved usage of relievers seemingly has been applied to the relievers themselves and unconsciously subtracted from the starters and hitters.

I tweeted a few days ago that many Hall of Fame voters seem to look at stats as if only those from the ninth inning count. This was a dumb comedy joke, but there’s a nugget of truth in it. The following table is a collection of all hitters likely to reach the five percent threshold this year. It also includes their tOPS (or the ratio of their OPS in a given split divided by their total OPS) for plate appearances treated as “late and close” (seventh inning or later, within a run):

Among the greatest hitters of this generation, nearly all of them hit significantly worse when the game was on the line than on average. (Not included: famous clutch performer David Ortiz, whose tOPS in these situations was 88.) It’s perhaps ironic that the best performer by this standard (Tim Raines) is the one least credited among them for his hitting prowess; it’s perhaps less ironic when one considers that he played eight seasons before anyone else on the list debuted, and before the modern bullpen took root in America’s heart.

Compare those to these greats of an older generation, the hitters enshrined between 1969-1979:

It’s not that hitters from this era were truer, greater men who knew when to tap into that limited reserve of greatness. It’s that they didn’t have to face Lee Smith and Trevor Hoffman. Instead, late in the game with the winning run on second, they had to face a toiling starter working on his eighth straight complete game, or at worst a reliever seeing multiple innings on back-to-back nights. Modern hitters are stuck facing fresh arms throwing at maximum effort. Heroism, for the hitter, has become an expensive thing.

Meanwhile, the modern closer hoards celebration: More than half of Hoffman’s innings ended with a handshake with the catcher and the roar of a satisfied crowd. Closers have come to represent winning, their very appearance generally an indication of the odds in their team’s favor. But despite the constant praise that surrounds them, and the wisdom that they’re at their best when they’re focused and everything lies in the balance, they’re not vastly more clutch than their hitting counterparts:

The phenomenon of closer usage and adjustment isn’t a new idea, but it’s something we’ve never truly been able to conquer. When the position of Angry Closer surfaced in the late 70s, it spawned an era of over-appreciation, and four Cy Young awards between 1977 and 1984.

The purpose of this essay is not to say that neither Lee Smith nor Trevor Hoffman deserve entry into the Hall of Fame, for those who care about the Hall of Fame. Nor is it meant to shame those who vote for them. Smith and Hoffman—and Wagner, who deserves equal support—were excellent pitchers who did their jobs well. These closers shouldn’t be held accountable for how they’re utilized by their managers, with Zach Britton being the obvious example. But a ballot that includes them and fails to include many of the great hitters they faced ignores an inherent lack of balance between the one-inning, max-effort reliever and other players.

The rules of the game prevent managers from timing the deployment of their star hitters the way that they have learned to do with their pitchers. The gaudy numbers that have resulted, both those favored by the older and newer generations, require an accounting of the favorable conditions under which they have accrued.