In this series, we’re investigating the outcomes when baseball players made what appear to have been New Year’s resolutions to do something differently in 2016. But unlike the rest of us, who try to waste less time watching TV or learn another language, we’re looking here at specific baseball outcomes. The first article considered batters who hit markedly more (or less) to the opposite field in 2016 than in 2015. The next two looked at batters who hit more or fewer balls on the ground and pitchers who induced more or fewer grounders.

And I’ll admit, framing these as New Year’s resolutions is a bit of a stretch. There probably aren’t a lot of baseball players who said last January 1 that what they really wanted to do in 2016 was to hit more balls in the air. Today, though, I’m going to tackle one that seems plausible: Better plate discipline.

It’s hard to imagine a non-Vlad Guerrero hitter who wouldn’t want to improve his plate discipline. Forcing pitchers to throw strikes means more chances to get a pitch you can drive. Reducing strikeouts and increasing walks, those are good things too. It’s pretty tough to identify a downside of plate discipline.

Measuring plate discipline is tricky, though. Strikeouts and walks? Often they go hand-in-hand rather than in opposite directions. Paul Goldschmidt, for instance, was 10th in the National League in strikeouts and first in walks last season. Among batting title qualifiers last year, the correlation between strikeouts and unintentional walks was positive 0.35—as strikeouts went up, walks did too.

So we can’t point to a hitter with a lot of walks or one with few strikeouts and automatically say, “Good plate discipline.” And, of course, walks and strikeouts are a product of pitchers as well as hitters. I remember somebody claiming that Manny Ramirez didn’t have very good plate discipline but he walked a lot in his prime simply because nobody wanted to risk throwing him strikes.

PITCHf/x can help here. We know whether or not every pitch a batter saw was in the strike zone. We know whether or not the batter swung at the pitch. Swinging at pitches in the strike zone is good. Watching them go by and get called as strikes is not. Similarly, swinging at pitches outside the zone is bad. Letting them go for balls is good. (Hold off before posting comments about the problems with those last four sentences; I’m getting there.)

So I constructed a Discipline Index, subtracting each batter’s swing rate on pitches outside the strike zone (O-Swing %, in PITCHf/x-speak) from his swing rate on pitches in the strike zone (Z-Swing %). (Disclaimer: I can’t find the first reference to this metric, but I’m not breaking new ground here. The idea of subtracting O-Swing % from Z-Swing % is not original. It’s been done before.) The five qualifiers with the highest Discipline Index last year were Brandon Belt, George Springer, Freddie Freeman, Andrew McCutchen, and Corey Seager. The five with lowest Discipline Index were Jose Iglesias, Joe Mauer, Kevin Pillar, Stephen Vogt, and Sal Perez.

Wait, I know, you’re saying that doesn’t sound quite right. And I agree! Here are three problems with Discipline Index:

All of that being said, I’m going to stick with Discipline Index. I’m not using it to say who has good plate discipline and who doesn’t. We’re looking for players whose plate discipline changed from 2015 to 2016, not who was high or who was low. Do I think Joe Mauer’s 19.8 percent Disciple Index, compared to the major-league average of 33.4 percent last year, means he’s an undisciplined hitter? No, I do not. Do I think his 2016 Discipline Index of 19.8 percent, compared to his 17.1 percent the prior year, means he exhibited a little more discipline in 2016 than 2015? Yes, I do.

So which players had the biggest increase in Discipline Index in 2016? Who vowed to chase less and/or swing in the zone more? As in my prior reports, the standard here will be at least 350 plate appearances in both 2015 and 2016.

There are several comments one could make about those 10 batters, but I’ll stick with the most obvious one: Freaking Mike Trout.

And while I really doubt anybody made a New Year’s resolution to swing outside the zone more and in the zone less, here are the 10 batters who were able to pull it off:

I’m going out on a limb and say that those 10 didn’t have seasons as good as the 10 guys whose Discipline Index increased the most. Let’s look for confirmation from TAv:

The 10 players who increased their Discipline Index the most were, in aggregate, better hitters in 2016 than in 2015, though not by a lot. However, they outperformed their PECOTA projections more substantially, by an average of 22 TAv points, so they were inarguably better in 2016 than in 2015.

On the other hand, of the 10 players whose Discipline Index decreased the most, only one (Michael Bourn, who started only 86 games) had a better year offensively, both absolutely and relative to projections (and better in Bourn’s case is an extremely relative term). Most of the others were a lot worse in 2016 than in 2015, shedding 29 TAv points on average, 18 vs. their preseason PECOTA projections.

So that would suggest that a New Year’s resolution to improve plate discipline is a decent idea, while a resolution to get worse is ill-advised. Let’s see whether that holds if we look at the 10 equally-sized deciles comprising the 185 batters with 350 or more plate appearances in 2015 and 2016. Here’s the table: 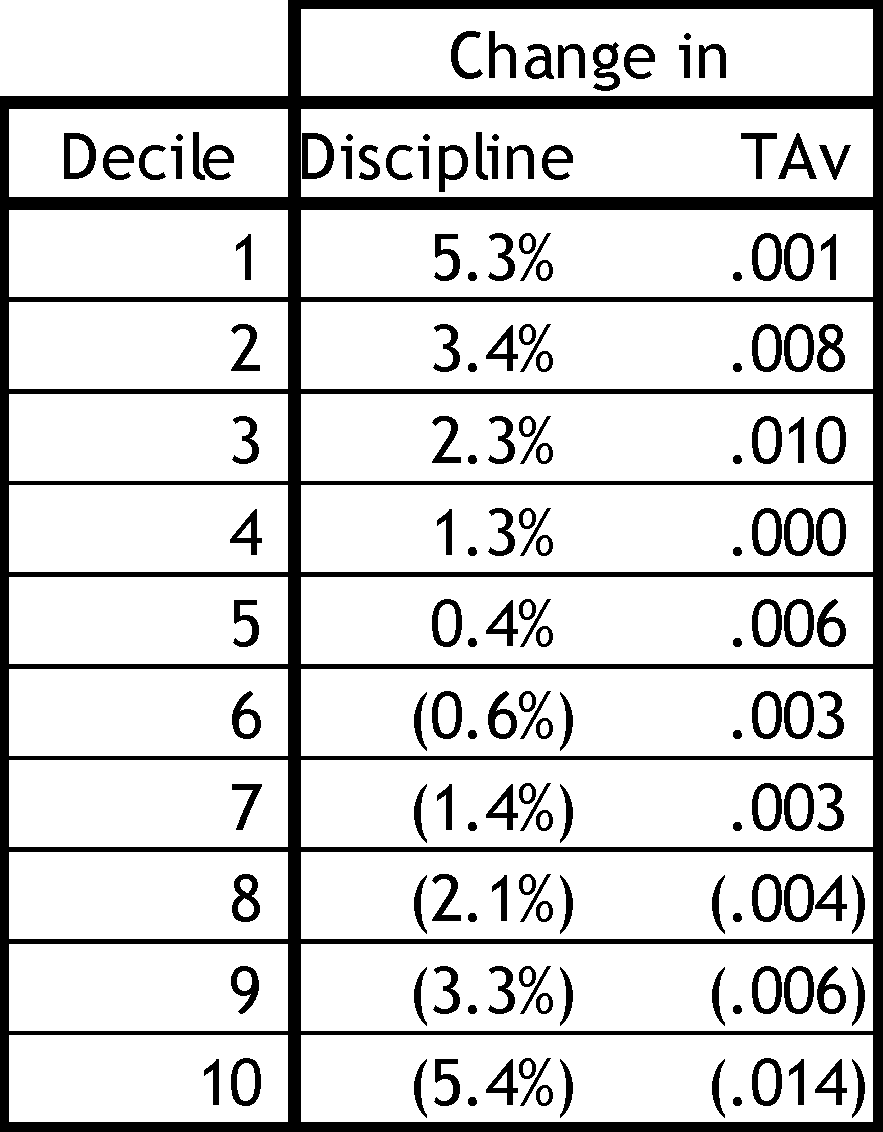 And here’s the graph: 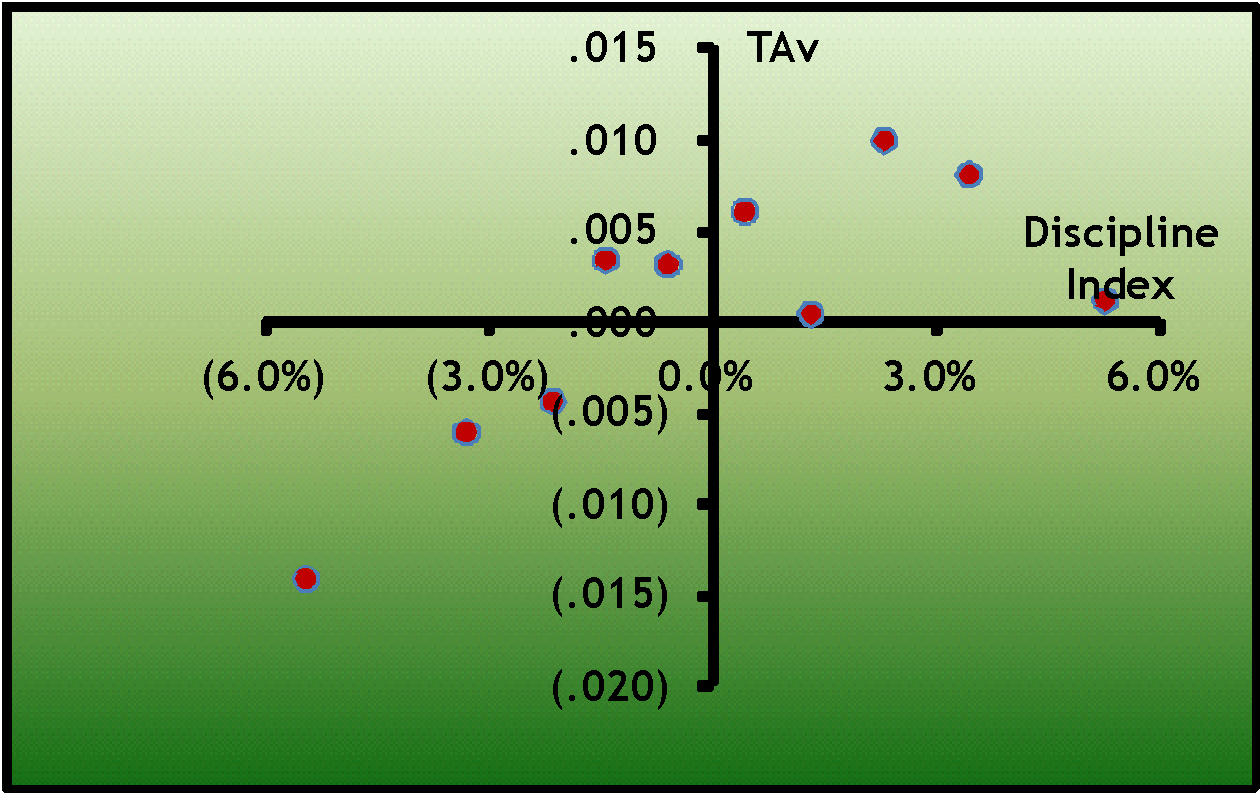 This is possibly the most pronounced relationship thus far in this series. The red dots clearly move from the lower left to the upper right: More plate disciple, better outcomes at the plate. Note again, though, that the results are clustered around a 0 percent change in Discipline Index. Of the 185 batters here, 101 of them—55 percent—finished 2016 with a Discipline Index within 2.5 percent of their 2015 figure, a negligible change of about one pitch every two or three games.

So improving plate discipline is good. But it’s hard for hitters to pull off.

You need to be logged in to comment. Login or Subscribe
huztlers
I think you are chasing your tail a bit here. There are three people involved in the transaction of taking a pitch, not just the hitter. The umpire and the count defines the actual strike zone on a given pitch, not Pitch/Fx. The most important part of a borderline pitch is the pitcher. You can't compare a Sale slider on the black to a Jered Weaver fastball on the edge. The data is just not going to be real useful to you.

Of course plate discipline helps tremendously, you just don't have the numbers to support it... but that is OK! There are many observations which cannot be proven with a limited set of data.
Reply to huztlers
mainsr
Exactly, the data are limited. I tried to explain that in the article--Z-Swing% and O-SwingZ% aren't perfect measures, so combining them will be imperfect as well. I do believe, though, that they generally get us on the right track with sufficient sample size (which will start to equalize some of the factors you mention). Among batters with more than 1500 pitches seen last year, the top five for O-Swing% were Corey Dickerson, Sal Perez, Brandon Phillips, Adam Jones, and Rougned Odor. The bottom five were Fowler, Jaso, Cervelli, Zobrist, and Bautista. I don't have a problem saying the former five were free-swingers and latter five weren't. But yes, any implication of precision here is off base.
Reply to mainsr
50cubs
There is a downside to plate discipline. For years hitters were rewarded for making contact; it was common knowledge until Bill James investigated it and refuted it.

Today, in part because of the influence of James and other sabermetricians, hitters are making less contact than ever before, game pitch counts are skyrocketing, and pitchers are being advised to pitch to contact.

This looks to me like a cyclical phenomenon. As happens often in the history of baseball, the pendulum has swung, and now it is swinging back again. Baseball teams need both: guys who can make contact when the situation demands it, and those who can wait for the pitch to hit out of the park.

Reply to 50cubs
mainsr
This is a good point and maybe I'll write a post about it...I remember when Red Sox/Yankee games were measured with a sundial, as each team loaded up on hitters who took a lot of pitches in order to tire out the starting pitchers. With modern bullpens, it's not so clear that that's a good strategy.
Reply to mainsr
50cubs
To a certain extent, the two skills are complimentary. Hitters who are good with the bases loaded are those who are willing to go deep in the count, and will take a strike before swinging.

Baseball provides contact situations (runners on second and third, one out) and power situations (runner on first, two out). Good hitters respond to both. The common denominator is situational hitting, not sticking to the same approach in any situation.
Reply to 50cubs
mainsr
50cubs, I may have to put you on retainer...this is another good idea for a future article. Thanks!
Reply to mainsr
PeterCollery
Suggested alternate measure of plate discipline: Count on which the at bat ends. Isn't plate discipline a combination of seeing a lot of pitches and getting ahead in the count? I'd posit that a guy whose at bat ends on an average count of 2.52 and 1.18 can be said to definitively have better discipline than his 1.83 and 1.44 contemporary.
Reply to PeterCollery
LlarryA
Maybe, maybe not. Certainly, being able to see a Ball near the strike zone for what it is, and letting it go without a swing is a fine thing, but sometimes, discipline means taking that borderline strike rather than getting a weak swing on it.
Reply to LlarryA
mainsr
Yeah, I thought about that. My concern was that some guys see a lot of pitches because pitchers don't want to give them anything to hit. The top 20 in pitches/PA last year included guys with good discipline, like Votto and Bautista, and guys who are very selective, like Mauer. But I think Trout (No. 3, 4.43 P/PA), Myers (No. 10, 4.27 P/PA), and Justin Upton (No. 20, 4.16 P/PA), not that they're not talented hitters, my thought is that they saw a lot of pitches because they were batters whom pitchers didn't want to give an opportunity to hit.

The other end is kind of interesting, too, and I don't know that it's all a lack of discipline--Sal Perez, Rougned Odor, Yunel Escobar, and Jonathan Schoop, saw the four fewest pitches per PA, but Altuve was next, and he had the ninth best K/BB in the majors!

So I'm not dismissing your comment, just throwing up my hands. Not sure if there's a really good way to measure this.
Reply to mainsr