January is a particularly low month for baseball fans. Pitchers and catchers won’t stretch for a month. It’s the time of year when we mewl for some baseball, any baseball, heck bad baseball, just so long as it is recognizable as such. It is a privilege of distance to forget a thing’s flaws. After all, sometimes baseball is slow and plodding. Sometimes it features a bunch of pitching changes. Sometimes it features the Padres.

The average time of game in 2014 was three hours and eight minutes; it dropped to two hours and 56 minutes in 2015 with the league’s pace-of-play rules. Using the Play Index’s time-of-game data, we know that for the 2,428 games in 2016[1] (185 of which went to extra innings), the average time of game crept back up, not matching its 2014 levels, but generally slowing:

I decided to take a look at the short and the long of it. After all, that’s what you do in January.

Shortest Game of the Year: September 29, Cubs at Pirates

The hand wringing over pace of play and time of game is a gnawing concern that we may, at some unknown point of future exhaustion, stop wanting to watch baseball. We’re worried that this great investment in time and treasure and feeling we’ve made will make us ridiculous. What if it’s just boring now? We don’t like the sneaking suspicion that we could have deployed our limited resources to greater delight. We only get to spend so much time not at work.

Rain delays are a particularly egregious manifestation of this phenomena. We are bored, there is no baseball happening in a place where we expect it, and we’re cold. We’re wet and cold, and with no defined limits as to when we might stop being either, our imaginations wander down a path unfurled into a future where we never warm or dry again. Sometimes it happens after they stop selling beer. We hate it, this sense we’ve made a bad choice.

But if there is a second-worst feeling, it’s the feeling of being cheated. You paid for this game. Sure, you might get a voucher for a different game later, but you wanted to see this one. You brought the family. There are 11 video highlights on MLB.com of this game. The rain delay is the focus of four of them, and is mentioned in the description of a fifth. 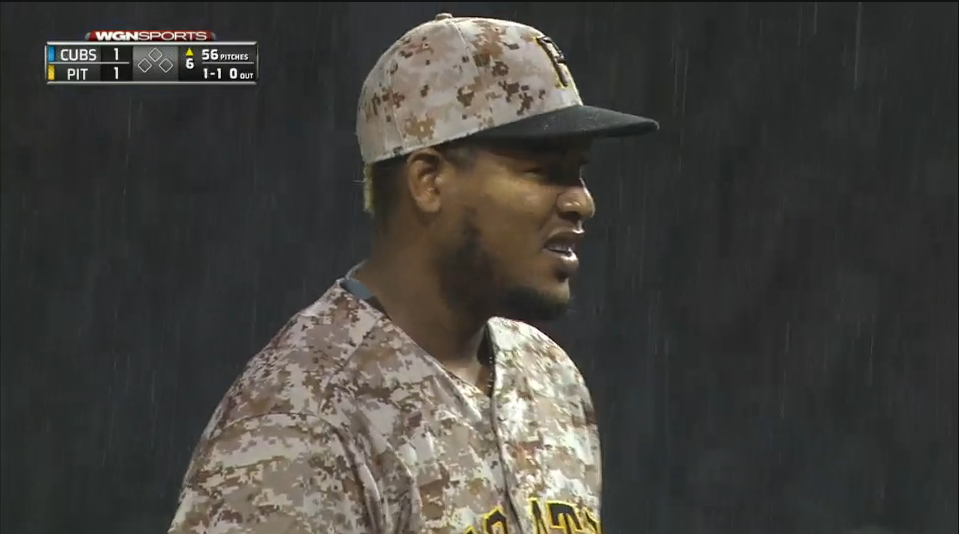 Ivan Nova looks pretty wet and pretty cold here, but he’s a pitch away from retiring Albert Almora and getting to go inside. He’s going to be fine. He won’t go to the playoffs, but he’ll get a deal for $26 million in the offseason. He probably won’t remember being so wet or cold when he signs it, and if he does, he won’t care. But the folks in the ballpark were left to grapple with that sense; that they’d been denied a few innings of their last home game of the season; that they’d had the futility of the Pirates playing anymore games at all shoved in their faces a bit obviously; that they’d been cheated out of something, even if it was a loss. It’s not as bad as no longer liking baseball at all, but it might be second worst.

It should be noted that one of the other highlights was of a controversial pierogi race. So we’re comfortable feeling a little ridiculous, provided someone else is in costume. 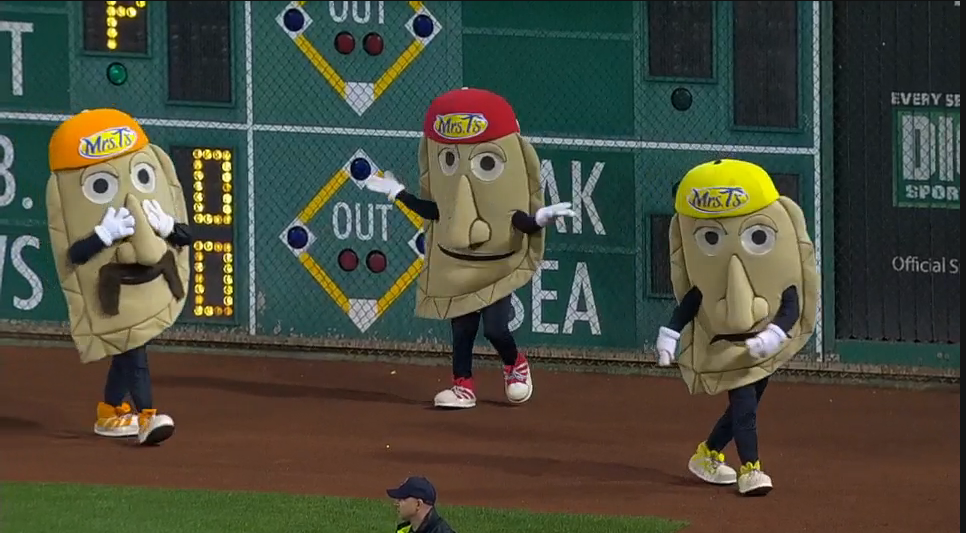 Shortest Nine-Inning Game of the Year: September 24, Mariners at Twins

One hundred and twenty-six minutes isn’t a very long time. It’s a reasonable nap. It’s a quarter to a half of a pot roast cook time, depending on the temperature setting of your slow cooker. Rogue One is 133 minutes; it’s not even a full rogue. Captain America: Civil War, the longest Marvel movie released so far, was 147 minutes long[3]. Here’s what’s happening at minute 126 in Civil War:

Oh, Bucky. It looks like you’ve been fighting again.

This game didn’t seem like the sort that would be particularly efficient. The Mariners starter, Ariel Miranda, only pitched four innings. There was a manager challenge in the eighth. Still, it was a low-scoring affair. There were 12 one-pitch outs, and 12 two-pitch outs. Scott Servais’ challenge lasted exactly a minute. With two on in the top of the ninth and no outs, Kyle Seager hit into a time-saving double play. Nelson Cruz’s fourth-inning home run left the ballpark at 114.3 mph.

Everyone and everything was in a hurry. I imagine they were trying to catch a discounted screening of Captain America: Civil War. It seems like the Riverview Theater would be the best place for it. As discount theaters in Minneapolis go, it has the best Yelp reviews, though I can’t say for sure it was still playing there in late September. Who would keep track of such things?

Longest Nine-Inning Game of the Year: June 24, Arizona at Colorado

This game might be baseball's literal worst nightmare. Were Rob Manfred to play Scrooge in a community theater staging of A Christmas Carol, this game would be the Ghosts of Christmas Past, Present and Future, because this game always was and always will be.

The night of the game, the Associated Press reported that according to the Elias Sports Bureau, this game holds the record for longest National League nine-inning game. The thing about this game is that if you were just scouting the box score, you might think it was good, or at least OK. A long game, sure, and one with most of the action late, but a 10-9 game. That’s so fun! No, it isn’t.

The two teams committed five errors, three of which belonged to Jake Lamb, including two on the same play. After falling behind in the sixth, the Diamondbacks scored six runs in the seventh, but gave up four back in the eighth. There were four lead changes in the final four innings. Normally that kind of back and forth is thrilling. But in a game this long, the thing you come to dread isn’t your team losing. You’ve already watched a lot of that. On June 24, the Diamondbacks were 12.5 games back of first place; the Rockies were 13. No, the thing you dread is that, with the sixth inning starting right around the two-hour mark, and both teams into their bullpens, all the back and forth will send you to extra frames.

But when what you’re bracing for is the dread of more baseball, you can be pleasantly surprised by a hero. This is Rickie Weeks fielding a ball in the Mariners outfield in 2015.

I feel bad for him, and for having made this GIF, and for sharing this GIF with you. I’m uncomfortable watching it. I’m very aware of how much I’m making fun of him. But here is Rickie Weeks (now Jr.) on the longest night in National League nine-inning history, robbing Nick Hundley of a game-winning hit. The Diamondbacks would hold on to win.

This was still a bad, long game, but even those have their triumphs, and this was one of them.

Longest Extra-Innings Game of the Year: July 1, Cleveland at Toronto 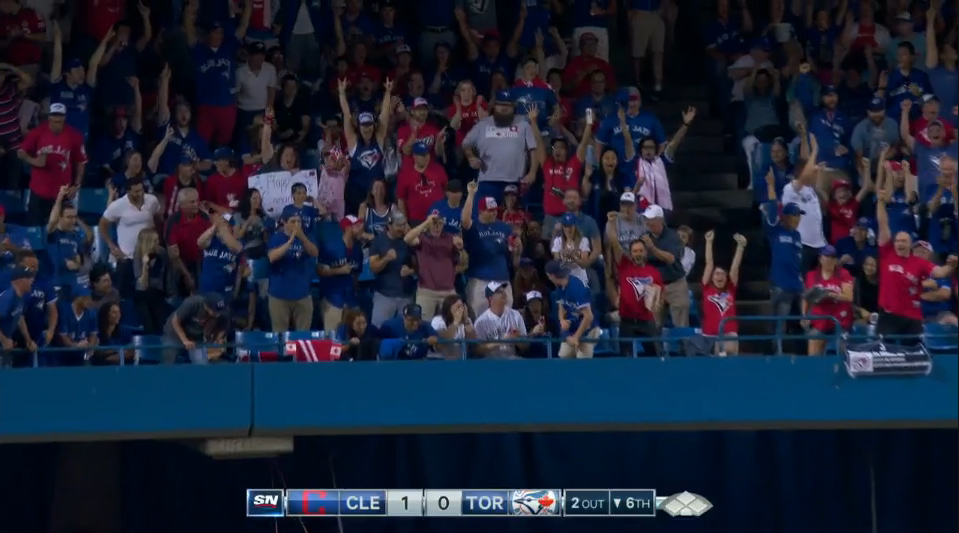 You dopes. This is the Rogers Centre, celebrating after Justin Smoak hit a solo home run to tie the game in the sixth. These people are so happy. Much of the ballpark is on its feet. It’s Canada Day! But they are being such dopes. They have no idea how this is about to go down. They thought they were getting a normal day at the ballpark, and on a normal day you want your team to hit home runs. You want them to tie it up. Except that they aren’t going to score anymore. Justin Smoak is all you’re going to get.

He tied it up and now you, the dope, have some choices to make. There’s always a moment in an extra-innings game where you have to decide whether to cut bait or stick it out. “I live here now. These are my chairs. I’m having beer after the seventh. This is my house.” If you stay past that moment, you almost have to stay to the end, because you’ve already sunk four hours into this thing. Then five. You appreciate that they’re still trying so hard. Ryan Goins is pitching now? Sure. Then six. And then, Darwin Barney is pitching (again, sure) and Carlos Santana hits a go-ahead home run. 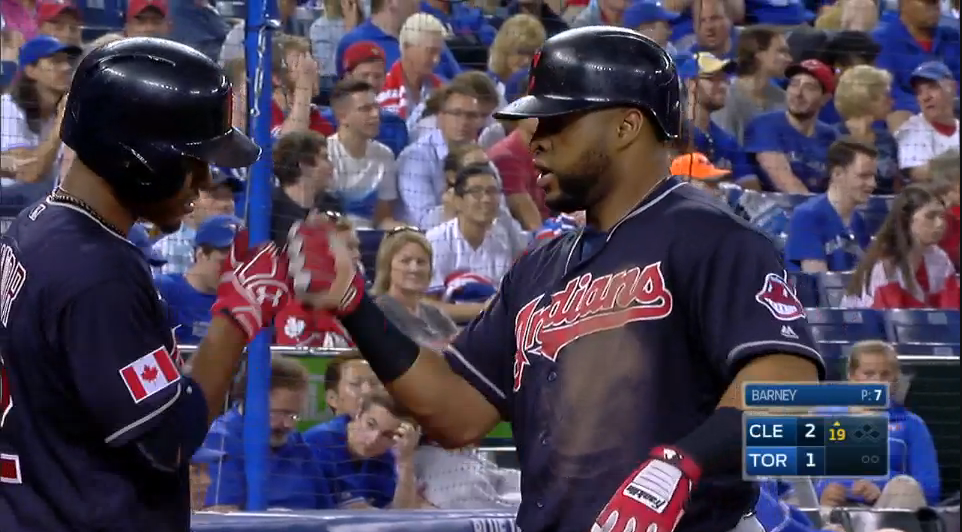 You watch him exchange pleasantries with Francisco Lindor and feel two emotions simultaneously: a guilty relief that it’s likely over and a growing rage as you look at your dad (father and son are framed just below Santana and Lindors fist-bumping arms), and realize you just sat through 19 innings and six hours of baseball. You dopes.

We’re right to want baseball now. We must want it very badly because many of us are going to go to spring training to watch our favorite teams play games that don’t matter, sometimes against themselves. But we may want to consider enjoying the privilege of our distance. It’s much easier to love something when you don’t remember how it ruined Canada Day.

[3] I remain unconvinced that these are actually discrete films.

You need to be logged in to comment. Login or Subscribe
jonsieg
This is hilarious - great job Meg. And good job on the Ringer MLB podcast last week as well!

1. typo there to fix
2. I think I nap wrong? Mine last like 30 minutes. I'm going to try and nap longer.
Reply to jonsieg
megrowler
Thank you! Glad you enjoyed this and the podcast.

This typo shows that you should not write when you are in need of a nap. Or at least, I shouldn't.
Reply to megrowler
batts40
I watched Jon Lieber throw a one-hitter in something like 1:45 at Wrigley one day, but was there for like 6 hours due to rain delays.
Reply to batts40
aquavator44
The Riverview Theater is one of my favorite places to see movies. They show movies extremely late in their theatrical runs, as well as some classic and family films. The theater itself is 1950s modernist, with one screen and seating for, I dunno, 250 people? Tickets are $2-3 and there is real butter on the popcorn. I wish I had seen Civil War there, if only to have saved some $$$.

Love the first Weeks gif. It's a powerfully honest moment when he realizes the ball is not in his glove.
Reply to aquavator44
brucegilsen
The shortest game I've seen in years was Pulaski in the Appy league on July 17, 2:04.
http://www.milb.com/milb/stats/stats.jsp?gid=2016_07_17_jcyrok_pulrok_1&t=g_box&sid=t425
I had a 4+ hour drive home afterward so I really appreciated it.
Reply to brucegilsen