Over the holiday break, Jeff Sullivan and Grant Brisbee appeared on Effectively Wild and joined Sam Miller and Ben Lindbergh to reprise their draft of baseball things.

With his second pick, Jeff drafted Fernando Rodney; his person, persona, his tipped cap. Rodney appears to be an engaging, interesting person. I’m sure he’s an excellent brunch companion. Jeff called him delightful. Except that—and this is what made him draft-worthy—his job is sufficiently high leverage and his results so inconsistent that watching him pitch when you have any sort of vested interest in the outcome is unpleasant.

It’s a common refrain for closers; it takes very little for us to have our faith shaken in the ninth inning, even with talents considerably steadier than Rodney on the mound, and if there’s one thing we hate as fans it’s to be made nervous. To wit: Ben shared that his mom used to sigh and exasperatedly exclaim “Oh, here’s Mariano”[1] whenever Rivera would enter the game for the Yankees.

I’ve never been a major-league pitcher, let alone a great one, but I’d think it’s easy to expect you’ll just win an easy one. Roger Clemens’ worst game came against a Yankees lineup without Don Mattingly, Rickey Henderson, Willie Randolph or Don Slaught. That was probably a game the Red Sox marked as a win before first pitch.

He’d end the year leading MLB in strikeouts, complete games, shutouts, FIP, and K/9. He was an All-Star. He finished sixth in AL Cy Young voting. The Red Sox won the AL East. But on June 13, 1988, Michael Martinez noted in his New York Times gamer that “the Yankees peppered him with modest singles and a few legitimate hits.”

''I didn't have any of the three necessary things it takes to win: velocity, location, and movement,'' Clemens said. He wasn’t a pitcher that night so much as a person who is often thought of as one.

Great pitchers have bad days all the time. Long careers feature their share. Disappointing though they are for the pitcher, there seems to be something sort of nice about it for the opposing folks concerned. And really, doesn’t it make us like the greats a bit more? Sometimes your worst day comes when you least expect it. It’s nice to know people who are really good at their jobs falter. We can only tolerate so much exceptionalism before our envy makes us mean.

Coors was unforgiving that day. Maddux’s game score was 10. He lasted just 3.1 innings. Mike Campbell turned in a similar performance on April 6, 1989; Danny Jackson anticipated such a day in 1995. Later though, Greg Maddux forgot a blip the way that greats do.

"Did I struggle there?" he asked Tracy Ringolsby in 2013. “ERA is nice, but a starting pitcher needs to concentrate on innings pitched and wins, and not worry about his ERA or strikeouts per nine innings or walks. It is all about going out there and winning.”

He received a no-decision on that day in 1996; it was hard for everyone. "Coors Field is all about going six innings, and that was before they messed with the baseballs [in a humidor]," Maddux said later in his interview with Ringolsby. After your worst day, you say what you have to so that you can get by pitching on the Moon.

Sports are odd in that your worst day is often directly to someone else’s benefit. Not always, of course; your worst might not matter if someone else is trapped inside their worst day. It is the nature of our own smaller lives that our nadirs are mostly private, sometimes with no one to blame but ourselves, no beneficiaries but the gods of meager tragedy, and no victims but those we love the best. Things don’t work like that for closers. Our mothers[2] are always watching. And so they see the whip around after the ball hits the bat, that small moment to measure how bad the day is. 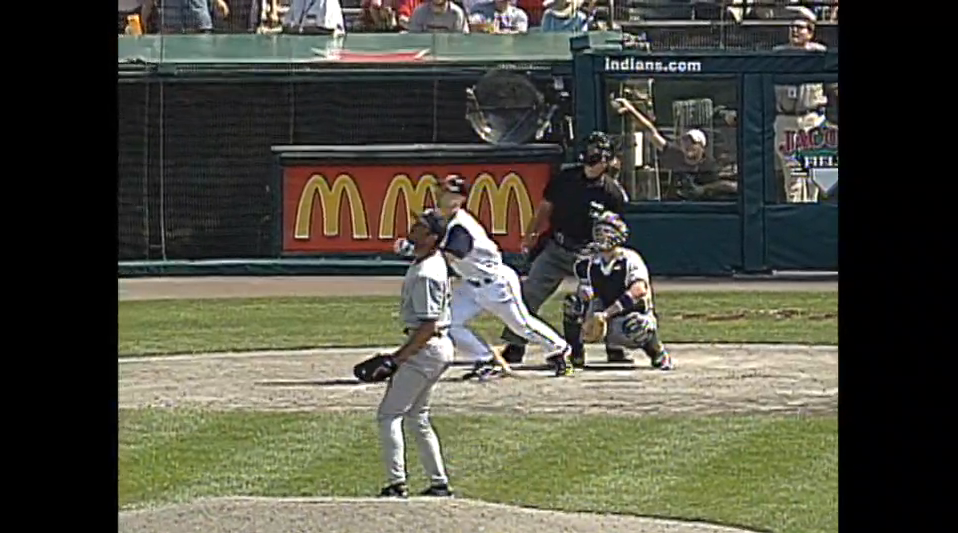 July 14, 2002 was an afternoon with several worsts until this worst proved to be superlative, and all the other worsts shifted to merely bad. The Indians got down 7-0 to the Yankees; the Yankees let the Indians get back within three runs. There were two errors and a runner was picked off. Those things were bad, but they weren’t the worst. The worst came with Bill Selby at the plate. The worst came when Bill Selby hit a walk-off grand slam off of Mariano Rivera. It was the first walk-off home run Rivera had ever allowed, and one of only five he would ever surrender.

And so this was the worst:

But then, so was this:

It’s an odd-looking moment, when you think of it that way. Selby had a career WPA of -1.7, a little number that hides a bunch of tiny betrayals of opportunity, but also hides this moment. It houses these four runs and a career-best .713 WPA. When asked about it years later, Selby would tell Jim Baumbach of Newsday that he had never met Rivera properly. "Hey, he's Mariano and I'm Bill Selby."

Selby knew who he was in the world. Namely, he was the sort of guy who doesn’t pal around with future Hall of Famers. Except on this day, maybe he had a case. That’s the thing about worsts. In life, sometimes they’re mean or belligerent or pointless. Sometimes they’re flailing expressions of failure, unidirectional, exhausting. But in sports, sometimes one guy’s worst is someone else’s best. Bill Selby’s mom probably watches baseball, too, after all.

There are a lot of things in baseball that aren’t very baseball-y. They may not be existential threats to the game, but they’re incongruous with its spirit. In a game that is a mechanism by which to learn about and cope with disappointment, the fact that every team gets at least one All-Star is an odd concession to sentiment. We keep wrestling with pitchers’ time. They keep tearing down new ballparks. But if I were brought in as a Hollywood script doctor and asked to sprinkle in a few facts to heighten a baseball movie’s realism, to make it feel like baseball, I might include the following: Barry Bonds’ worst WPA game was a 14-inning affair during which he had seven plate appearances.

It was his worst day by this metric, a series of whiffs on escalating leverage. And he still drew a walk, hit a double, stole a base, and was intentionally walked in the 11th inning. Think about the decision to walk him. Maybe you suspect he's not at his best, but what if you're wrong? It's Barry Bonds! Better not risk it. Sometimes you’re having your worst day, but nobody knows it yet.

The funny thing about Albert Pujols’ worst game, given what we think of him now, is that it didn’t come with the Angels. His worst day made him Steve Buechele, the only other batter since 1988 with at least five plate appearances in a game to register Pujols’ exact same single-game WPA. Pujols will be a Hall of Famer; Buechele seems destined for a more localized sort of grandeur. Buechele was an unremarkable major leaguer and is now the bench coach for the Texas Rangers. He was college roommates with John Elway.

John Elway’s worst game as a professional quarterback (with more than 10 passing attempts) came against the Kansas City Chiefs on Sunday, December 18, 1983. Elway threw for 143 yards and four interceptions on 34 attempts on his way to a 11.9 passer rating. The Broncos lost. Twenty-two years later the St. Louis Cardinals also lost, in part at least because of Albert’s forgettable game.

On June 24, 1991, Frank Thomas hit his first career grand slam. After the game, he told the Associated Press: “That’s my first grand slam; never in the minors, never in college. I hit one in high school in my junior year but this is different. This is the big leagues.”

Thomas received a standing ovation from the home crowd, peopled by fans who intentionally looked like this: 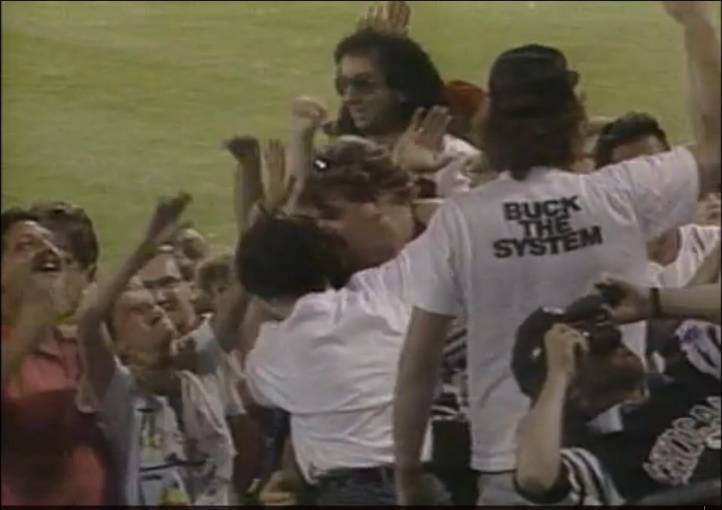 That’s big-league stuff. That’s awe. It’s different than high school. Three days earlier, of course, Thomas didn’t hit a grand slam. Three days earlier he had a bad day, only it didn't matter. Right after Thomas struck out swinging in the eighth inning that June day, Carlton Fisk came in as a pinch-hitter and hit a home run to put the White Sox ahead. Later, right before Thomas would hit into a double play that sent the game to extras, Robin Ventura drew a walk with the bases loaded to drive in Joey Cora. They won it later on a Lance Johnson fielder’s choice.

Frank Thomas won a Silver Slugger that year. He led the league in on-base percentage. He hit 32 home runs. In an otherwise sterling year, that night Thomas laid an egg. Sometimes on your worst day, the guys around you pick you up.

Playing baseball is awfully hard. We know that even the best hitters miss seven out of ten times, and we know that the competition is better than it has ever been. We have a Mike Trout now, and a Kris Bryant, and a Corey Seager, and Clayton Kershaw and Chris Sale to counter them. We have relievers who throw 100 with good sliders, but who still get tired, and good conditioning, and smart front offices. But we forget sometimes that even the greats deserve “Oh, here’s Mariano,” and more often than we like to admit.

People fail and succeed and it’s hard to know when it matters until after the last pitch has been thrown. We know what it takes. We could perhaps stand to be a bit more forgiving of the journey to get there. After all, they give us tipped caps and home runs along the way. Even on their worst days, it’s something.

[1] Assuming that Ben’s impression of his own mother is a faithful one, it’s the voice your mother makes when you refuse to wear your coat when conditions clearly suggest that you should. Just wear your coat. And get a flu shot.

You need to be logged in to comment. Login or Subscribe
jdeich
There's likely an interesting parallel article about the most WPA earned by any batter in one game.

#1 on the Play Index is a little-known platoon outfielder with only 3 plate appearances that day. But man did he make them count.

#5 is "more traditional": Jimmie Foxx going 6-for-9 with 3 HR and 8 RBI in a marathon. But even that was a game "won" by a guy going 17 innings in relief and only giving up 14 runs. Hall of Very Good candidate Wes Ferrell gets the rare 11.1 inning blown save. And the whole thing took 4 hours and 5 minutes. Oh, 1930s baseball. You lovable scamp.
Reply to jdeich
MikePemulis
What was the wpa effect of this: https://www.youtube.com/watch?v=gNt3UuDTBz8#t=00m59s ?

Also, how do you hyperlink in the comments?
Reply to MikePemulis
megrowler
The D-backs win expectancy went from 84% to 100% (I suppose the 100% is obvious). That inning was Rivera's worst post-season performance by WPA (-0.625). I looked at regular season performances because there are just more games to chew on.

And I'm sorry to say I'm not sure, which is an embarrassingly unhelpful answer from someone employed by the site, isn't it?
Reply to megrowler
TheArtfulDodger
use the standard html for inserting links:

< a href ="url">link text and then close it with /a in brackets
Reply to TheArtfulDodger
onegameref
Gotta love the Kenny Banya reference. For a Seinfeld worst day, you could go for Jerry making every simple school boy mistake in the softball championship game. There were so many but only a few ball playing chances to choose.
Reply to onegameref
Deadheadbrewer
Not even close. Jerry's worst day was when he drove Teri Hatcher out the door and out of his life. That's the equivalent of giving up a five-run walk-off HR.
Reply to Deadheadbrewer