With the year winding to a close, Baseball Prospectus is revisiting some of our favorite articles of the year. This was originally published on August 26, 2016.

Most baseball players will not get rich from playing—most will probably lose money, either in expenses or by delaying their real careers—and yet they almost all keep playing, keep moving up, until they’re not allowed to anymore. Why is this? If it were simply that baseball is fun, they could keep playing but stop moving up—no need to move across the country to Lake Elsinore when perfectly good Sunday men's leagues are going on in every zip code. They could settle into a life where baseball is played without ambition.

But something other than money or the crack of the bat keeps producing indy-league rosters and Org Filler, and I believe it’s this: Ballplayers want to measure themselves. It’s not enough for us to exist on this earth; we have to know how tall we are, how much we weigh, what our high score is and what our press clippings say. Moving up the ladder is necessary for ballplayers who don’t just want to know they’re good, but exactly how good they are, in the grand-scheme-of-things kind of way.

In the summer of 2015, Dylan Stoops came to play for the Sonoma Stompers in the Pacific Association, where Ben Lindbergh and I were running the Stompers' baseball operations. (Ben found Stoops using a spreadsheet of college stats. Stoops was all but retired, having finished his college career undrafted because of labrum and knee injuries.) At the time we were trying to sell Sean Conroy, one of Stoops’ teammates, to major-league clubs, and while we could show how good he had been in the Pacific Association, we didn’t know how good the Pacific Association was. We had to compare it to the levels we do understand—the affiliated minor leagues. By looking at how players who had moved from higher leagues down to the Pacific Association, and vice versa, we came to a conclusion, which (if you’re really curious) you can read in the memo we put together, the second half of which is available to read here. Here’s our conclusion:

“In our estimation, a player who performs above average in our league is probably suited to something a little higher than short-season ball, but lower than High-A. And Sean has been way above average.”

Dylan Stoops was also way above average for us. On Wednesday in Rancho Cucamonga, he put our conclusions to the test. He pitched for the Lake Elsinore Storm in the High-A California League, his first appearance in affiliated ball. He is not the youngest prospect in baseball, but, in one manner of speaking, he is the newest. A week ago he was completely outside organized baseball, and now he’s in it, and we get to find out what he really is. 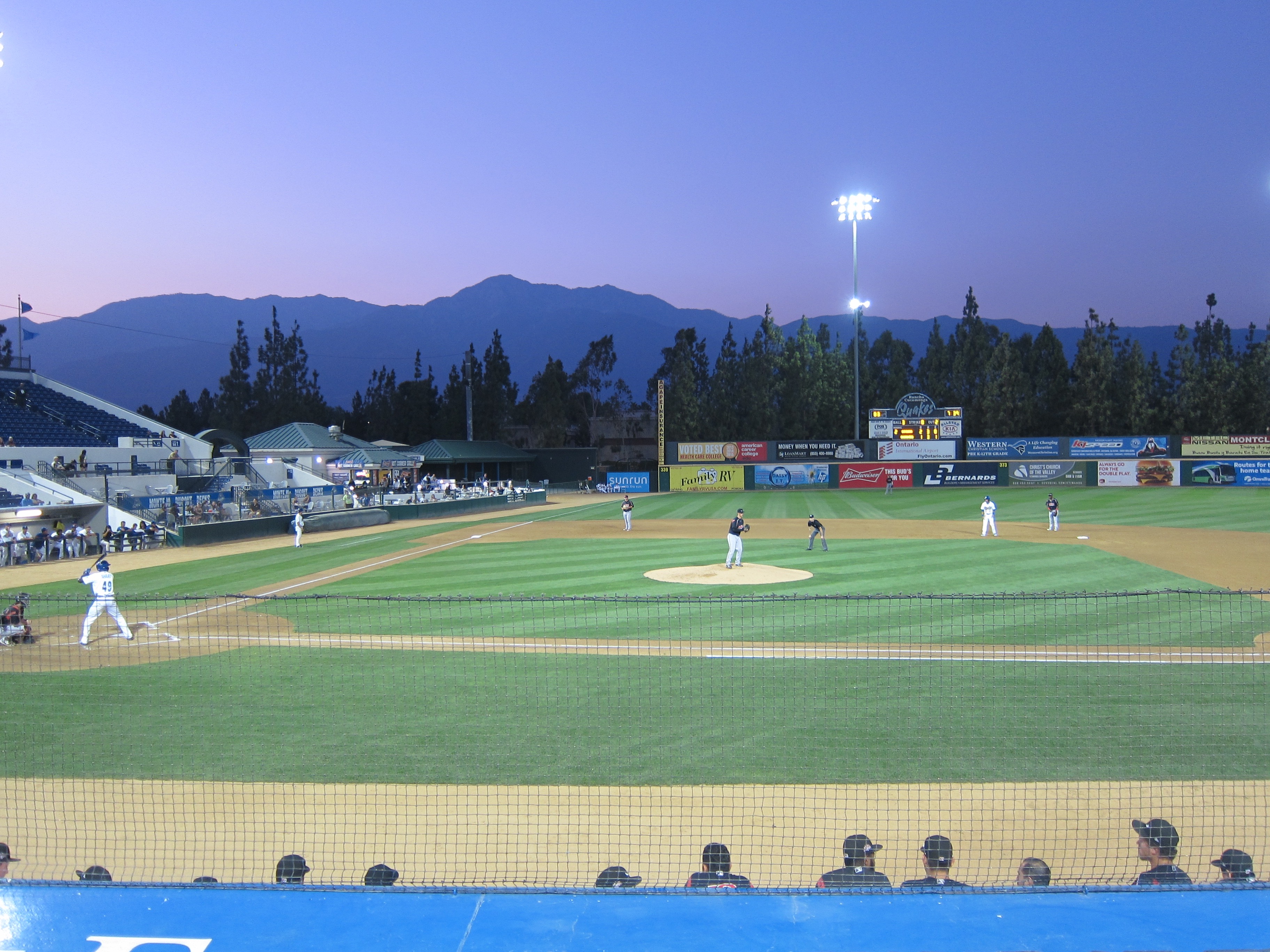 “I ain't afraid to die any more, I done it already.” –fictional Hugh Glass

My most vivid memory of Stoops pitching last year was in San Rafael, when we brought him in for a fireman relief appearance in the fifth inning against our toughest rivals. There were 1,052 fans in the stands that day, and Stoops was making his fourth appearance for his first professional team. We were in a pennant race that was sending us all through wild mood swings. The game was close, the middle of the order was up, and Stoops got out of a huge jam by spinning a 3-2 curveball to the San Rafael cleanup hitter, a hulking outfielder who had played High-A ball for the Texas Rangers. Stoops got the strikeout.

Compare those to the facts of Stoops’ start Wednesday. The outcome of the game was close to irrelevant, as most affiliated minor-league games are, with players barely disguising the fact that they’re competing not with their teammates but with their teammates. There were, by my unofficial count, around 400 fans in the stands in Rancho Cucamonga, not counting the 50 or so dogs that would periodically all start barking at the same time. (It was bring-your-dog night.) The 400, though, included around five scouts, which made all the difference in the world.

Stoops was out way early stretching. He looked anxious, as he did in the dugout during the top of the first, when he kept taking off his cap and putting it back on again. When the inning ended and it was his time to take the mound, he looked hesitant, as if he didn't want to wait any longer but also didn't want to be the first player out of the dugout. He held his ground and was the fourth to take the field for the bottom of the first.

His first three pitches were all 84 mph fastballs, which wasn't great. (According to PITCHf/x in Sonoma, he averaged 86 mph last summer.) The Quakes leadoff hitter had to time it, but roped a double down the third-base line on the fifth one he saw. The next batter hit a fastball past a pulled-over second baseman for an RBI single, and two batters into his career, Stoops trailed 1-0.

Stoops would tell me after the game that the two hits calmed him down. Maybe they created a sense of fatalism. A couple weeks ago, pitching indy ball for the Traverse City Beach Bums in the Frontier League, he actually told his mom that at the end of the summer he was going to call it quits. He’d finished his master’s and decided it was time to get to work, spend more time with his family and his serious girlfriend; he was sick of indy ball. Then, two days later, the Padres called him and signed him, which changed everything. Now he can see a long career right there in front of him; the majors are only three promotions away! At the same time, he has the sense of peace that comes with having embraced one’s mortality.

He started the third batter off with a curveball that dropped in tightly for a strike. The rest of the game was totally different.

There are two questions that loom large here. The first is this: Is there room in baseball for a pitcher who throws an 84 mph fastball?

If there’s not, well, go home everybody. Stoops reached back and touched 86 a few times, but mostly he was at 83, 84, and the Quakes were not fooled. (He touched 89 in Sonoma.) When they hit the fastball, they hit it hard, gappers or hard foul balls or singles up the middle. So Stoops mostly didn’t throw it.

I once asked Andrew Parker, the Stompers catcher, about a guy Parker had just caught in the bullpen. “He can spin the ball,” Parker told me, Parker's ultimate compliment for a pitcher. Not “he can throw 95,” but “he can spin the ball.” Parker explained that no pitching coach can teach a pitcher how to spin the ball. They can teach you a cutter, or how to get different two-seam movement, better command, a changeup, even a hard slider, but spinning the ball is inherent, and most pitchers just can’t do it. Stoops, it was obvious, could.

I used Zito not just because Zito was really good for a long time, but because late-career Zito was the comp I kept thinking of watching Stoops. The fastball was dookie, the velo problematic. But there was a useful changeup, an exceptional curveball, and a lot of shape to the breaking pitches. Is there room in baseball—in a bullpen, or on a 40-man, or at least in Triple-A—for late-career Zito? I genuinely don’t know. He pitched a lot of innings for a good team, but some of them were regrettable.

The second question that looms is whether the Padres can teach Stoops to throw harder than 84 (or 86). Indy ball is a land with almost no coaching and no training staff. (We had no pitching coach on the Stompers; the only pitching advice he got was from our manager, a former second baseman.) It’s hard even to draw motivation from teammates, who as a general rule include few 80-grade makeups.

Stoops, to my way of judging it, has amazing makeup. He’s cerebral and competitive, generous and disciplined. All of that will, one hopes, make him coachable, because he’s got some coaching to undergo. He gets very little out of the lower half in his delivery, with a short, clipped stride that adds some funk and deception but hardly any power to his pitches.

His body needs work; he doesn’t look as strong or as athletic as his Lake Elsinore teammates, no surprise considering the difference in lifestyle between indy and affiliated leagues. He has a relatively thick, but not muscular, lower half. He’s 24, tall and left-handed. It’s easy to imagine that he has another gear in him, and that an expert player development staff can get him there without too much struggle.

A couple months ago, I said this:

Very Good Pitcher Dylan Stoops with a 7/4/1/1/2/9 line tonight in the Frontier League. Better than a bunch of guys getting drafted this week