With the year winding to a close, Baseball Prospectus is revisiting some of our favorite articles of the year. This was originally published on September 16, 2016.

In 2006, the Red Sox traded Andy Marte, Guillermo Mota and Kelly Shoppach to the Indians in exchange for Coco Crisp, David Riske and Josh Bard.

There were plenty of reasons to dislike trade if you were, as I was, a Red Sox fan. Crisp was a relative unknown, Marte was a prospect stud, and I mean, why couldn’t the Sox just have resigned Johnny Damon? But my Mom found an even better reason to dislike the trade: David Riske’s name. What follows is a brief, reimagined rendition of the conversation that followed.

Mom: I don’t like this at all. They should’ve just resigned Damon. And you can’t use a reliever named Riske. That’s asking for trouble.
Ben [extremely early-teensplainy voice]: That’s ridiculous! Riske was good last year!
Mom: That’s not in the AL East, though. And still, his name is Riske.

In essence, at a very young age, my mother had warned me about the dangers of Reliever Name Foreshadowing, or, as I will refer to it henceforth, RNF. I’ve thought about RNF sporadically throughout the years, but was reminded of the valuable lessons it offers a few weeks ago, when I got the increasingly rare opportunity to watch most of a Red Sox game with my Mom.

Fernando Abad was on the mound, you see, and now you know where this is going. A brief re-enactment:

Mom: Seriously, they need bullpen help and they trade for a guy named Abad. What do they expect?
Ben: I … I don’t know. You’re right.
Mom: Also, I miss Don Orsillo.
Ben: Me too, Mom. Me too.

What follows is a list of seven firemen from the past several seasons who’ve suffered from severe RNF. I used the incredibly scientific criteria of scrolling through B-Ref lists until my eyes got tired, asking people for contributions on Twitter, and relying on my fading memory.

How much pain could we have been spared by abiding by the lessons of RNF? By taking these names at face value, how many runs could we have saved? Let’s see.

If you read A Song of Ice and Fire more than once, you’ll be blown away at how much subtle foreshadowing George R.R. Martin includes throughout his early books. For example, pretty much the entire Red Wedding is foreshadowed in the vision Daenerys has in the House of the Undying in A Clash of Kings. It’s imperceptible if you don’t know the Red Wedding is coming, yet obvious if you know what awaits. It’s one of the best examples of foreshadowing I’ve ever read.

Abad’s name is the opposite. It’s just… it just tells you what he is. I was mildly pleased when the Red Sox traded for Abad because I thought “I mean, he can’t be worse than Tommy Layne.” Let me tell you, it can always get worse than Tommy Layne. Abad pitches with all the confidence of a dog from a Sarah McLaughlin commercial. Worse yet, he’s 30 and left-handed so we’ll have to deal with him forever. Your team should not employ Fernando Abad, and you’d know that if you just read his name. One point for my Mom.

It’s quite fitting that Badenhop was a sinkerballer, inducing grounders a a 54.4 percent clip throughout his entire career. It’s also fitting that he bounced between five teams in just eight seasons, always pitching well enough to justify a roster spot but never well enough to solidify himself as a lasting contributor.

Maybe that’s because he got stuck with some pretty bad defenses supporting him. In his eight seasons, his teams finished 28th, 28th, 26th, 26th, 26th, 14th, 10th, and 10th in team fielding percentage. It’s a bit odd that someone with his skill set is already out of the game— he was good as recently as 2014—but unlucky bounces are par for the course for a Badenhop, I guess. Mom never said it had to be the pitcher’s fault.

Listen, the name “Balfour” comes with some fairly obvious foreshadowing, but not enough people pay attention to the fact that this man’s name is *literally* a sentence about what he shouldn’t do. If he was Kevin Balfour or Todd Balfour or Dansby Balfour, okay, that’s one thing. But Grant Balfour? I mean Jesus, does he use Yukon Havefirstbase as an alias? Balfour had Great Stuff™, but whenever he entered the game you couldn’t feel too bad about your chances. Victor Martinez certainly didn’t [language warning]:

So, how many times did Grant Balfour literally grant ball four? In his career, 252 times total. To be fair, per Baseball-Reference's’ Play Index, Balfour never allowed a game-ending walk. He actually only walked in six runners in his career, which I guess isn’t bad for 539 IP. But his career 4.2 BB/9 ain’t great, especially for a high-leverage reliever.

As foreboding as Balfour’s name is, he had a pretty decent career. He did walk 19 percent of the batters he faced in his last season, though, so Mom is still always right.

The husband of excellent Twitter follow Eireann Dolan and a good beard-haver, Doolittle is poised to someday do the unthinkable; make my Mom wrong. He’s generally been excellent when on the mound (30 K%, 6 BB% for his career), he’s fun-as-hell to watch and he’s especially dominant against lefties, who he’s held to a .182/219/.305 line.

Remember that “when on the mound” caveat? Yeahhh. Doolittle’s name doesn’t portend failure. It simply states that Sean will not be able to do much, and unfortunately, that’s becoming a trend. The former position player threw just 13 2/3 innings last season and is on pace to finish with under 40 innings in 2016. So far in his young career, he’s missed time with injuries to his patellar tendon, ribcage, elbow, shoulder and more. RGIII thinks he has bad luck. We should all be rooting for this trend to end, but as of right now, foreshadowing and my Mom remain undefeated.

There are lot of things you want your relievers to do to baseballs. Throw them. Huck them. Hurl them. Spin them. Cut them. Slide Them. Sink Them. Occasionally, you might even want them to take something off of them. But you do not, as a general rule of thumb, want your relievers to lob them. Is it cool when someone like Yu Darvish lobs an eephus and someone strikes out? Of course. But that’s not usually what happens when a baseball approaches a batter at a sub-optimal speed.

Kyle Lobstein is what usually happens instead. You could hit a Romanov tsar with a Lobstein fastball and he wouldn’t bruise. The average speed of Lobstein’s fastball over his career? A paltry 87.2 mph. At least Jered Weaver is impressed. Hitters seem to have noticed too, what with their .277/.342/.425 career slash facing him. Somewhere, Kevin Slowey nods sadly. Somewhere, my Mom nods knowingly.

“Hey now, Putz was pretty good,” you might be thinking to yourself. And yes, he was. Notching 11-plus WARP as a reliever means you had a damn fine career, and Putz also made an All-Star game and finished 13th on MVP voting in 2007. He was the first Mariner ever to win the Rolaids Relief Man of the Year Award, one of the most coveted honors in all of baseball. He currently owns the 53rd most saves in MLB history. Gotcha, Mom.

But look past the numbers. Putz was nicknamed “The Big Guy,” which is a pretty putz-y nickname. He shared a dorm with Tom Brady at Michigan, and Tom Brady is the putziest putz who ever putzed. But the real, irrefutable evidence that Putz embodied the phrase “never go full Putz:” 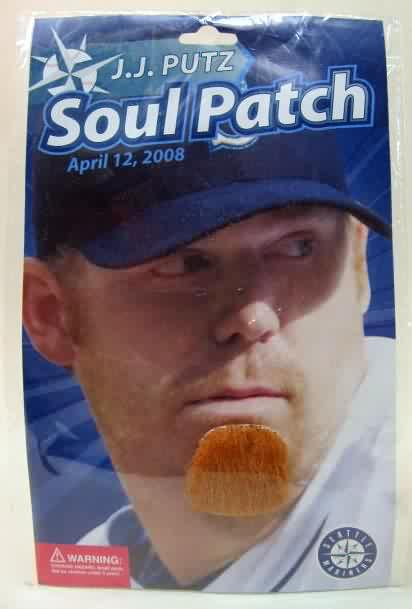 This poor man never had a chance. Perhaps if he’d been a running back or an oil rig captain or an NBA executive in Philadelphia, Tankersley would’ve had the right name for the job. But you don’t want your relievers to tank, and unfortunately, that’s what Taylor did. Perhaps that’s a bit unfair; Tankersley never allowed a walk-off hit, ball or HBP in his brief career. He did, however, earn three losses and 11 blown saves in 168 career games. Couple his 4.58 career ERA with his history of arm injuries, and you end up with just a four-year MLB career.

This brings us to the classic question: Is it better to have pitched and tanked or to never have pitched at all? Taylor gained four years of major-league experience, living the life so many millions of children dream about living every year. Sure, he was a LOOGY for the league’s most infamous franchise. But the man won eight major-league games. He notched four saves. He earned over $1.5 million in his career.

That’s pretty darn good, and it underscores that my Mom’s RNF theory isn’t about being mean or denigrating any of these players. They were all MLBers, all capable of performing against the best competition in the world. Unfortunately, they were also fated to eventually fail. RNF doesn’t blame the player. RNF just is.

So there you have it. One takeaway is that it’s possible to treat, but not cure, the symptoms of RNF. Guys like Balfour and Putz had some pretty good years before succumbing to this disease, and Doolittle is on his way to carving out a pretty nice career as well. But in the end, RNF claims them all.

Another takeaway is that you can’t let one good year trick you into believing a reliever has moved past his RNF. In 2014, Badenhop and Abad were reasonable relievers. But RNF doesn’t go away; it lies dormant. By 2015, Burknando Abadenhop was allowing runs at an alarming rate. There’s nothing crueler than false hope.

But perhaps the biggest takeaway is that when you’re a 16-year-old know-it-all and your Mom tries to drop some baseball knowledge on you, just shut up and listen. She’ll teach you more than your sarcastic Twitter friends, more than your GChat echochamber and more than Preaching Ex-Player Version 56. Your Mom is right*, and when you stop and think about it, you’ll realize that your Mom taught you everything about baseball that you need to know.

Oh, and my Mom is also a sixth-grade English teacher. Guess she taught me everything I know about foreshadowing, too.

Future Inductees: Scott Blewett, Bradley Walksemin (I made this one up)

*Mom, if you read this, you’re still wrong about Mike Tomlin.

You need to be logged in to comment. Login or Subscribe
mbovie
Fun article Ben, will keep this in mind when drafting next year. A couple other honorables:

Boof Bonser (Boof- though not a real word, has some colorful definitions according to the urban dictionary)

Erik Hacker who's doing much better in Korea.

Dick Pole... not quite modern but really the only reason I left a comment. And he wasn't just a reliever, he was a swingman!

Reply to mbovie
lonechicken
Love the Balfour bit. When he first came up, I kept seeing his name in fantasy free agent lists and thinking, "Why is a hockey goalie listed?"
Reply to lonechicken