With the year winding to a close, Baseball Prospectus is revisiting some of our favorite articles of the year. This was originally published on May 18, 2016.

Derek Norris just can’t quite decide what kind of baseball player he wants to be.

A few years ago, in Oakland, he fit the mold of a patient, offense-first catcher with middling defensive skills. His pitch-framing numbers were below average and he possessed an exploitable arm, throwing out just 17 percent of would-be base stealers during the 2014 season (not to mention the 7-for-7 baseswiping clinic the Royals put on against Norris and the A’s pitching staff in that year's Wild Card game).

Then last year, his first in San Diego, Norris stopped walking yet remained a competent hitter by tagging a career-high 49 extra-base hits. His also went from a poor framer to a great one in the span of a couple months while simultaneously managing to solve the throwing issues that plagued him in Oakland. Runners ran frequently on Norris in 2015—perhaps recalling his previous year’s struggles or perhaps because he often caught TRAA king Tyson Ross—but he responded by throwing them out at a 34 percent clip.

So far this year Norris has simply stopped hitting altogether, as his OPS hovers somewhere south of .600 as of this writing. He’s also morphed into the second coming of Benito Santiago behind the plate.

A 27-year-old catcher, one who doubled his caught stealing rate in the previous season (with a conventional rise-from-crouch throwing style) and entered 2016 with over 6,300 professional innings at backstop, woke up one day and decided to go rogue.

Why?
There’s a video floating around that shows a Padres High-A catcher named Jose Ruiz throwing out a runner at second from his knees. The taker of that video, Twitter's Woe, Doctor, tells me he hasn’t seen Ruiz (or any other Lake Elsinore catcher) bust out that variety of throw since, but the standalone act got me thinking that Norris’ sudden change could have been prompted by his organization. Maybe part of A.J. Preller’s Padre Way involves converting all catchers into little Santiagos.

The other—probably more likely—explanation is that Norris simply made the switch on his own, got it OK’ed by his manager, and debuted it in the relative low stakes of an early spring training game. Maybe it was something he experimented with back in high school or college, something he decided to dust off and unveil in the majors. Maybe someone—a coach, a friend, an internet self-help guru—put the idea in his head, and Norris decided to give it a shot. Shoot, maybe the whole thing happened by accident and after it worked the first time, it mostly stuck.

How does it work?
Conventional wisdom on Norris’ new throwing style says that it cuts down on the amount of time needed to release the ball, which in turn makes up for any decrease in throwing velocity. Instead of rising out of the crouch to make the throw, Norris now cuts out the middle man and relies more on pure arm strength—and as much torque as he can muster from his knees—to make his delivery.

Does conventional wisdom hold? I inquired with MLBAM about any available Statcast data on the subject, and they delivered.

Norris’ arm strength, which Statcast defines as the maximum velocity of a throw, is down just over 2 mph in 2016. Makes sense. What’s surprising is that his average exchange, the time it takes between Norris receiving and releasing the ball, is up in 2016. In throwing primarily from his knees, it’s actually taking Norris longer to catch and release his throws, which is the opposite of what we figured to be true. Even more surprising: Despite significant declines in arm strength and exchange so far in 2016, Norris’ pop times have hardly budged, ticking up just two-hundredths of a second, from 1.94 in 2015 to 1.96 this season. Huh.

Here are some GIFs (left is 2015, right is 2016), with accompanying Statcast data for each pair of throws:

What’s going on here? Take a look at the final pair of GIFs. On the left is Norris’ quickest exchange from the 2015 season, and he threw that ball nearly 5 mph faster than the effort he made from his knees in 2016. Yet the pop times for each throw, both an-above average 1.92, are somehow identical. We’re left with a few hypotheses as to how this is working (if not a concrete answer):

1) The Statcast data is imprecise. We consider this the most unlikely of our three hypotheses.

2) Norris stole a handbook full of Cardinals/Royals devil magic on a trip through Missouri and figured out how to bend the space-time continuum. Second-most unlikely.

3) The throws from Norris’ knees are traveling a shorter distance. Okay, maybe we’re onto something here. 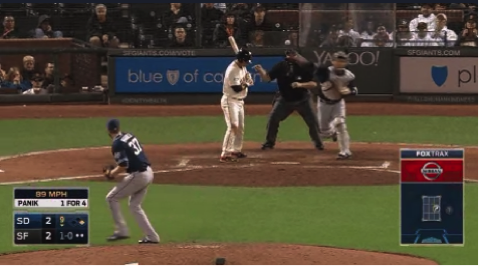 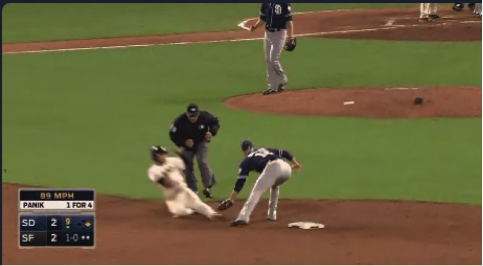 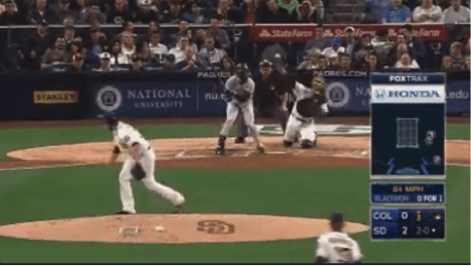 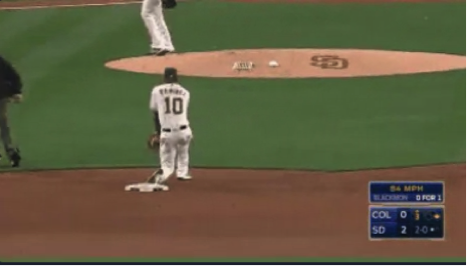 Notice how Norris is releasing the ball from a lower point in the image from 2016, more on plane with second base; he’s also, possibly, releasing it closer to the front of home plate—go ahead, clear out some space in your living room and mimic both styles. It seems like throwing from your knees allows for a release point that’s both lower and closer to second base.

Check out where each throw is caught at the end of its travels. Clint Barmes (2015) catches the ball almost even with second base while Alexei Ramirez (2016) catches it, on a hop, well out in front of the bag. Are there enough feet saved to make up for slower throws and exchanges? It’s not clear, entirely, but at this point it’s our best guess as to where those missing milliseconds are hiding.

But wait . . . does it work?
Consider the machinations of Norris’ new throwing style. He’s costing himself velocity and exchange time in turn for a shorter throw. He’s saving some time on his end thanks to a new release point (we think), but the rest of the time saved—awaiting infielders snatching the ball earlier in its flight—isn’t exactly helping him throw out more runners. Maybe those new middle infielders are just jumpier this season, but maybe Norris’ throws, coming in slower and lower, are forcing them to change. Either way, while his new pop times are unchanged his effective pop times—the time it takes for a tag to actually be applied—are probably up some tenth of a second. That qualifies as an eternity in the razor-thin calculus of the stolen base.

Norris’ caught stealing rate is up to 40 percent this year, which is six percentage point higher than his previous career-best mark from last season. Note that he’s caught just two of nine would-be base stealers from his knees, though. Throw in additional unanswered questions about his newfound style—does throwing from your knees lead to more erratic throws or worse mechanics or higher rates of shoulder and arm injuries?—and maybe the whole experiment just isn’t worth it.

Norris has returned to his old ways for two of his last three attempts, so maybe he’s already done the math.

Thanks to Matt Meyers and Alan Nathan for research assistance.