It’s that time of year again. The weather turns cooler, and in parts of the country, there’s snow on the ground. The smells of spruce, peppermint, and nutmeg are in the air, as are songs we remember from childhood. The days are short, but the nights are made brighter by colorful light displays. It’s our annual seasonal tradition, marked by obsessive refreshing of Ryan Thibodaux’s Hall of Fame tracker.

I can’t remember when I first read about the difference between peak value and career value when evaluating Hall of Fame candidates. It was probably Bill James, but I’m not sure. The concept, regardless of who came up with it, is that for a player to be Hall-worthy, he must have been one of the best players in baseball for a stretch—peak value—while sustaining an overall high level of play over many years—career value. Players like Willie Mays, Ted Williams, and Babe Ruth obviously have both. Some Hall of Famers had relatively short careers but such outrageously good peaks—Sandy Koufax comes to mind as a good example; Hack Wilson as well—that they earned enshrinement. Other players had peaks that were too short, like Roger Maris and Dale Murphy.

On the other hand, there are Hall of Famers who got there by being very good for a really long time without being notably great in given seasons. Don Sutton led his league in WHIP four times, in K/BB three times, in ERA once, and in games started once over a 23-year career, never finishing higher than third in the Cy Young voting (and receiving any votes at all only five times). That’s it. But he was elected to the Hall on his fifth try on the strength of his career value, which included 324 wins and a 3.26 ERA. Bert Blyleven, a stat-head cause célèbre, also had limited black ink, though his 3.31 career ERA was actually a good bit better than Sutton’s given his parks and era. Or Craig Biggio, who career-valued his way to 3,060 hits but was in his league's top five in on-base percentage or slugging percent during only one season.

We can understand a short peak not translating into a plaque in Cooperstown. But how about long and successful careers without an awe-inspiring peak? We think of such players as “compilers”—players who stick around long enough to put together impressive career totals, but without individual seasons among the best in baseball. Next year around this time we’ll be debating a notable compiler, Omar Vizquel, who played more games at shortstop (2,704) than anyone in history, but with a career .243 TAv and just 14.1 FRAA (less than a quarter of Andrelton Simmons’ career total to date).

How do compilers do in the Hall of Fame voting? To answer this, I’m going to show you some tables. A lot of tables. In each, I’m going to list the top 25 players in various categories. Here’s the key of what I’ll list:

In each category, I’m going to list only players who meet the Hall’s requirement of 10 seasons played.

Let’s start with the ultimate compilers: Batters who stayed around a really long time. 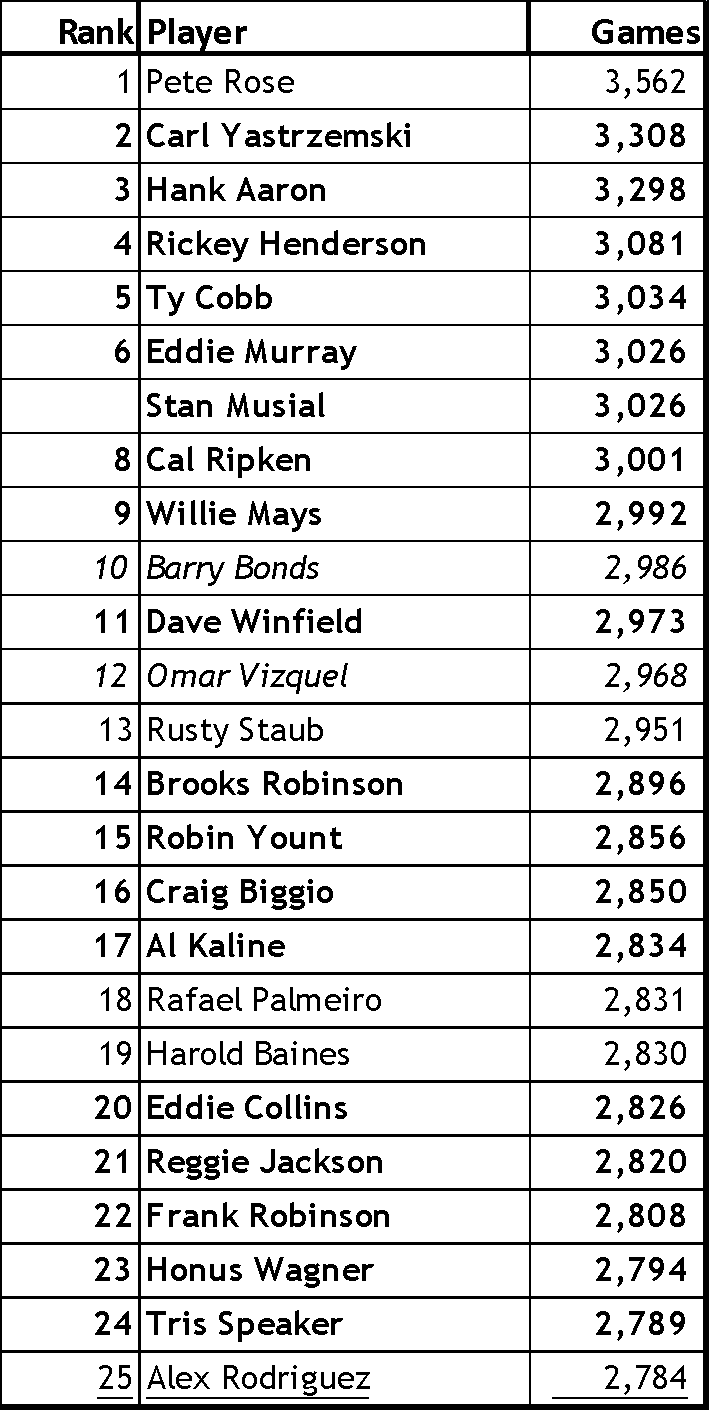 This isn’t really an interesting list, because players don’t stick around for 2,800 games if they aren’t good. Let’s look at the more traditional batting statistics: Hits, runs, and RBI. 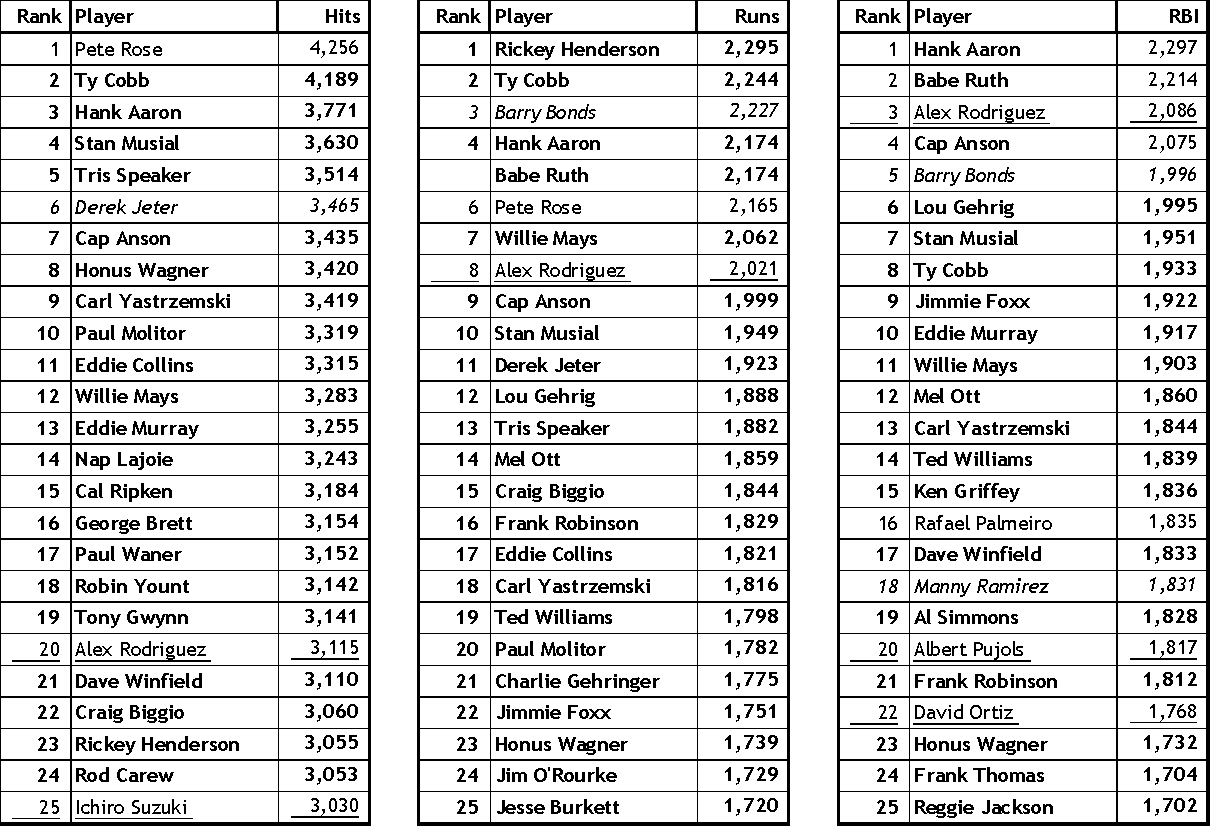 I’m going to go easy on the commentary here; these numbers speak for themselves. Suffice it to say that a) all things being equal, these are no-doubt Hall of Famers, and b) all things aren’t equal.

The slash-line (AVG/OBP/SLG) compilers aren’t really compilers, in the sense that they add to their totals the longer they play. In 2016, Alex Rodriguez added to his career totals for games played, hits, runs, RBIs, doubles, homers, walks, and stolen bases (he had three!). But he didn’t do his career slash line any favors by batting .200/.247/.351. These players maintained their averages over 10 or more seasons: 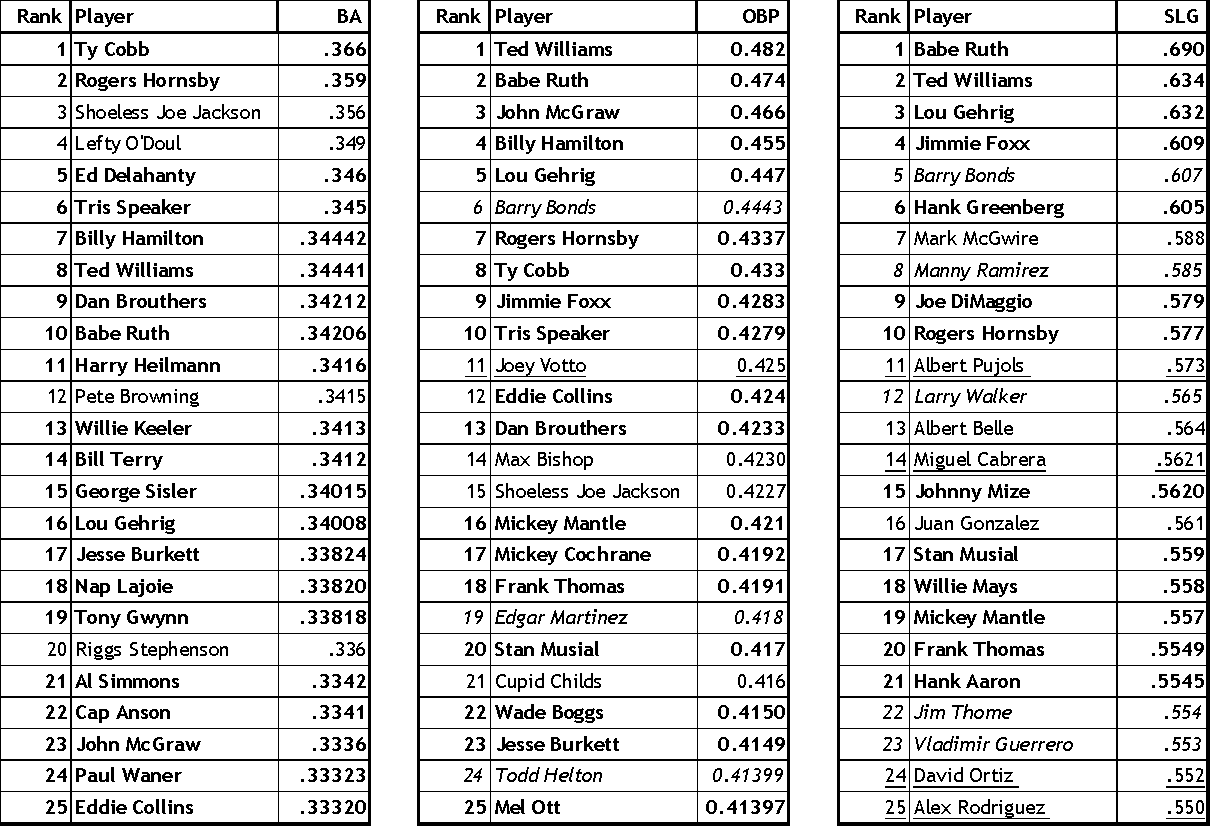 You know almost all of these guys. Among those you may not, Riggs Stephensen had only five seasons in which he played more than 100 games, Lefty O’Doul had only six, and Pete Browning had only seven. Max Bishop batted only .271 with a .366 slugging percentage while walking nearly as often (1,156 times) as he had hits (1,216). Cupid Childs was a 19th-century second baseman who was a regular for only 11 years.

How about extra-base hits? 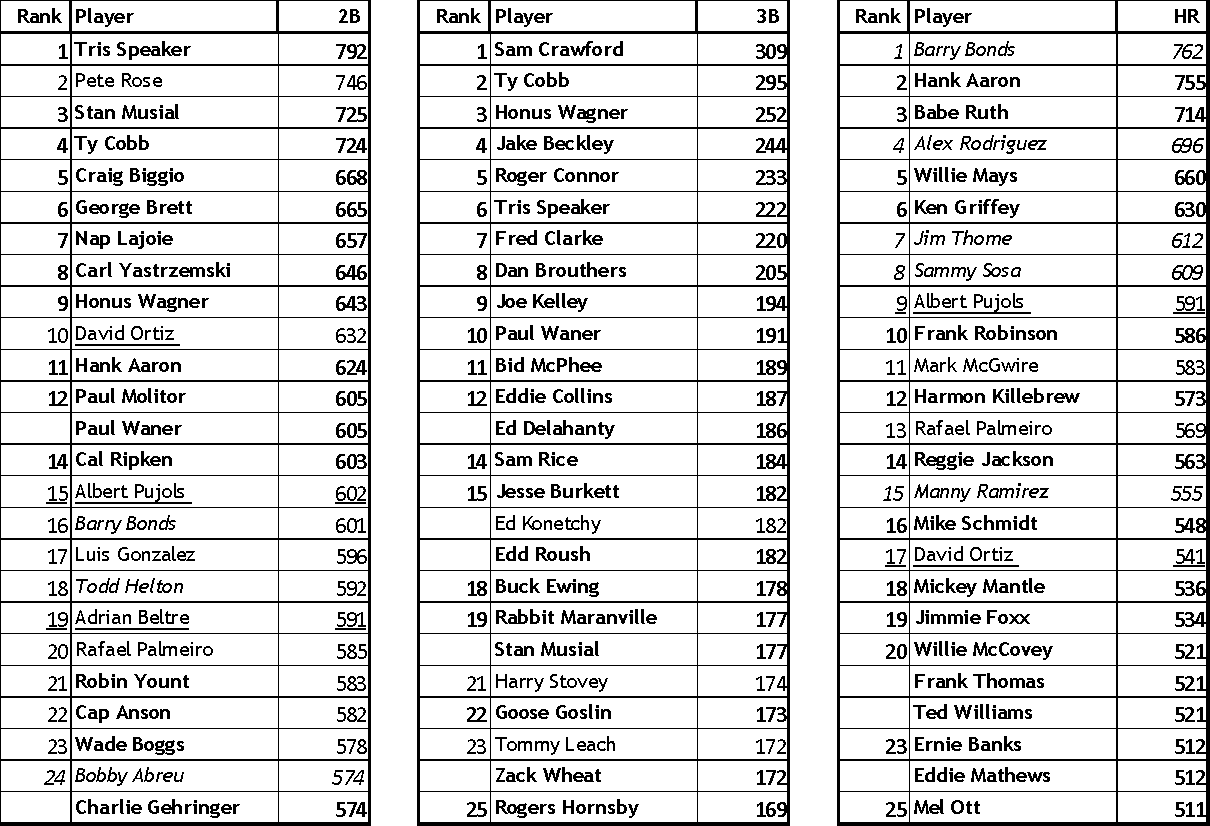 The list of doubles and triples made me say “huh” several times. David Ortiz and Adrian Beltre had that many doubles? Huh. The all-time triples leaders are guys who played when groundskeeping, outfield defense, and the quality of balls was not what is today … and Stan Musial? Huh. By contrast, the all-time home run list includes some of the most recognizable numbers in baseball.

One more list that, fingers crossed, will have one more name in bold after this year’s vote, and one list using a fancy, new-fangled sabermetric thingee: 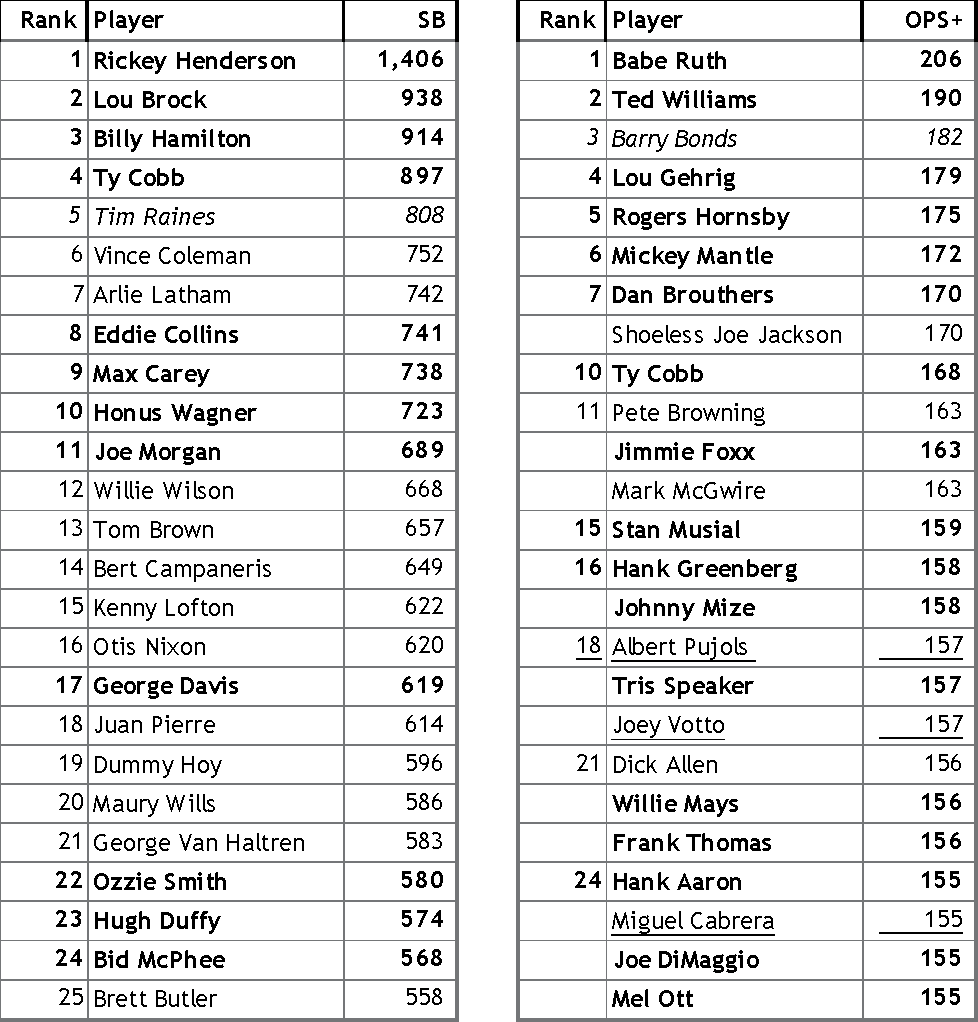 Let’s move over to pitching. The Hall is dominated by starters, so we’ll begin with them. Starting with the pitching compilers’ ne plus ultra, the leaders in games started and innings pitched: 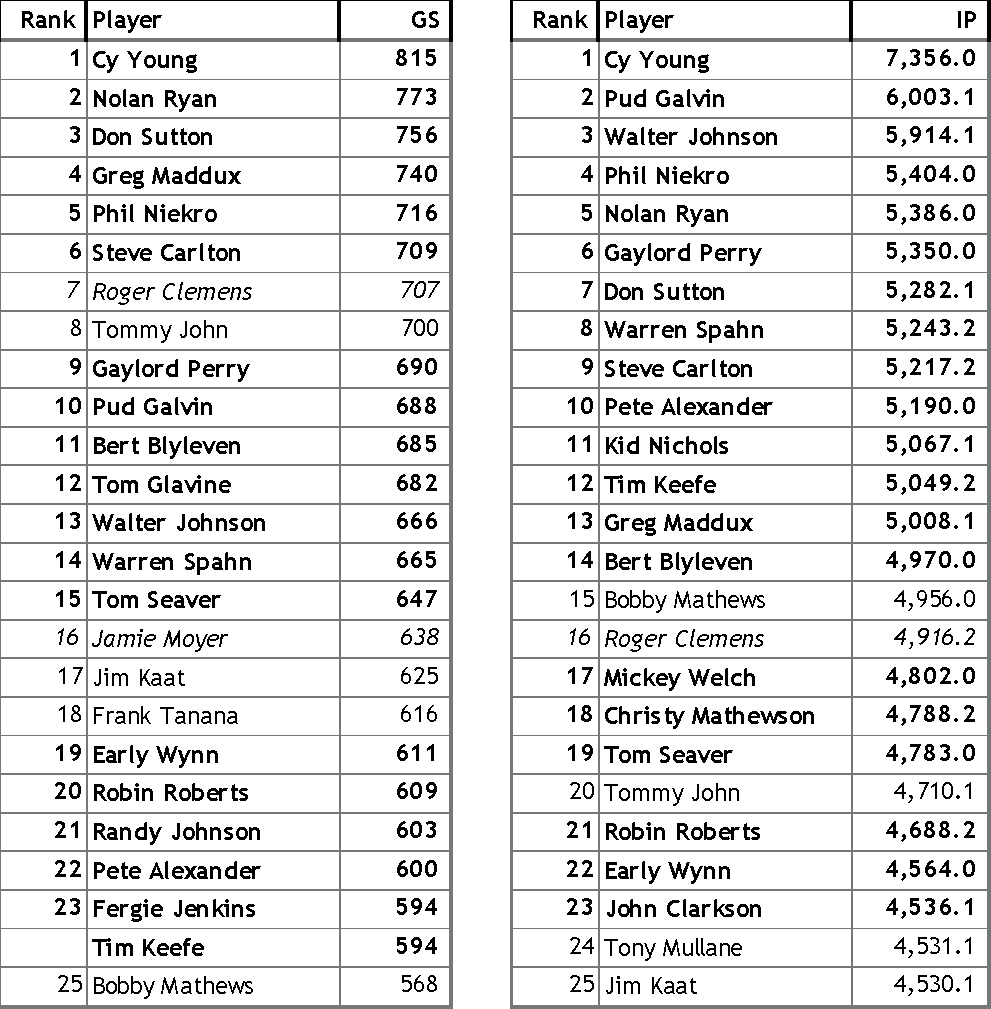 I had two reactions to these lists. First, did you know that the man Bill James calls “Surgery” had that many starts and innings pitched? Second, to answer the “who the hell is Bobby Mathews?” question, he was a 19th-century pitcher (1871-1887) who, in a five-year period, averaged 58 starts and 514 innings pitched per season.

Here are pitcher wins and strikeouts: 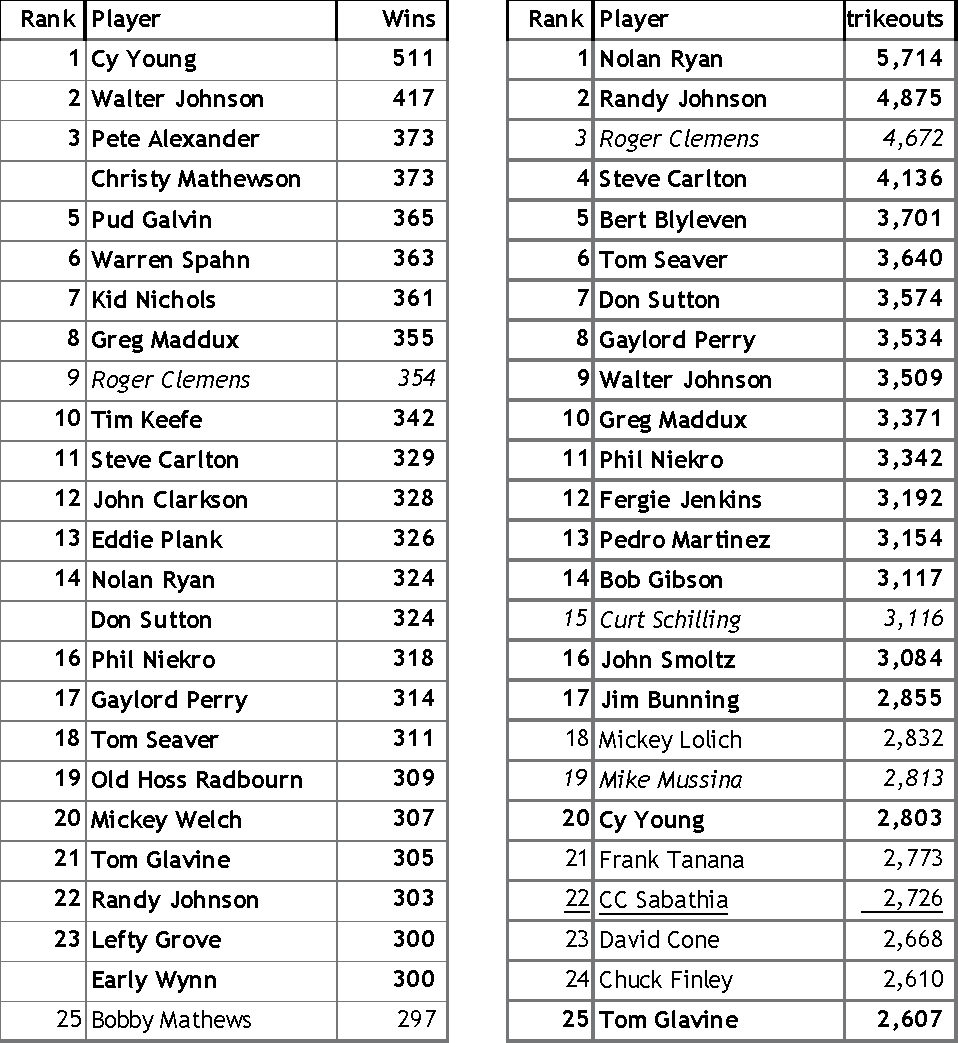 And for relievers, games and saves: 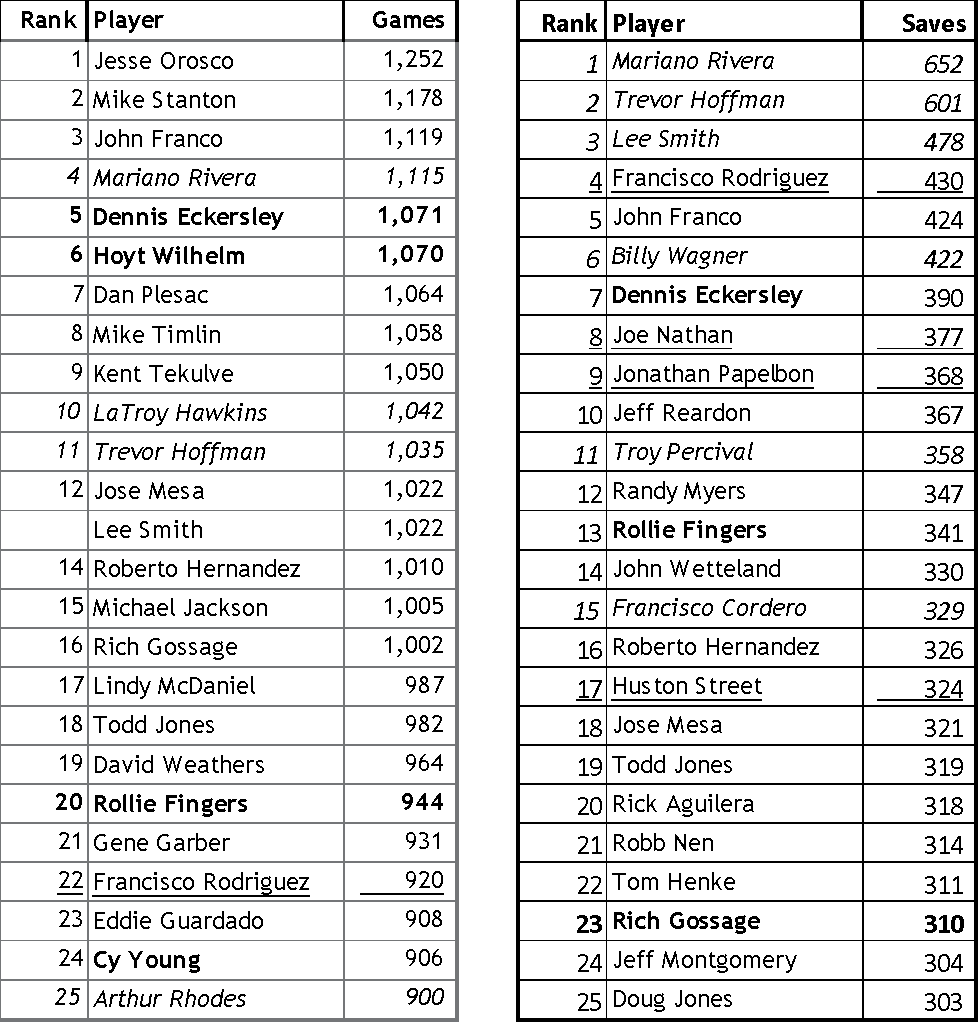 Gonna go out a limb here and say that being a compiler of reliever stats does not punch your ticket to the Hall. I like that first list—a bunch of more or less contemporary relievers, plus Cy Young.

I saved ERA for last, because it’s kind of fun. Here are the all-time leaders:

Deadball pitchers, plus Mariano Rivera and Clayton Kershaw (who’s pitched only nine seasons, but hey, I’m making the rules here). And any pitcher list that contains Babe Ruth is worthwhile. But if we limit it to players who have 2,000 or more innings and pitched beyond the 19th century, we get this:

This looks like an impregnable list. It’s going to be hard for a contemporary pitcher to crack it.

And finally, ERA+, which is adjusted for park and era:

That’s a more hopeful take on modern baseball. Eleven of the top 25 are still alive. Again, I waived the 10-year requirement in order to get Kershaw’s name there.

Just one more table, I promise. What does all this mean? How likely are compilers to get into the Hall? For each table above, I’m going to list the percentage of eligible players in the top 25 who’ve got plaques. By “eligible players” I mean players who are eligible for induction and can no longer be voted in. So, for example, in the doubles table, I’m excluding Pete Rose (banned), Barry Bonds (still on the ballot), Todd Helton and Bobby Abreu (not yet eligible for the vote), and Ortiz, Albert Pujols, and Adrian Beltre (still active). Here are the percentages:

Yes, I know, I should be using the percentage of the top 25 eligible players, not the subset of the top 25 who are eligible, but this isn’t meant to be an infallible guide to the Hall of Fame. It’s just informational. And the information is that, by and large, if you compile some really big numbers, avoid PEDs, and don’t hang out in the bullpen, you wouldn’t be premature to program Cooperstown into your GPS.

Thanks to Alex Crisafulli of SB Nation’s Viva El Birdos for research assistance, i.e., coming up with the idea for this analysis.

You need to be logged in to comment. Login or Subscribe
Grasul
Fun article, nice work.
Reply to Grasul
mainsr
Thanks! I hope I didn't go too overboard with all those tables.
Reply to mainsr
lonechicken
So is Mussina the guy that voters will draw the line at, more or less for SP compilers?
Reply to lonechicken
mainsr
The electorate has a real problem with starters who didn't get 300 wins, and they can't get comfortable, it seems, with his 3.68 ERA, even though it was outstanding for his era.
Reply to mainsr
stevemillburg
Very interesting; thanks. A quibble: Shouldn't Pete Rose's name be crossed out? He's ineligible for the Hall of Fame under its current rules, right?
Reply to stevemillburg
mainsr
Hey, that's more than a quibble. You're absolutely right. I'm not sure how that ended up that way. Somewhere between Excel and here my crossouts got inadvertently removed. Some software issue, I imagine. Yes, Rose, Shoeless Joe Jackson, and Eddie Cicotte should all be crossed out.
Reply to mainsr
stevemillburg
Actually, now that I, um, actually look through the tables instead of just glancing at the first couple, I don't see any strike-through names: not Pete Rose, Eddie Cicotte, or Shoeless Joe Jackson. And in the Runs table, Derek Jeter's name should be italic, not bold. Again, quibbles. Thanks.
Reply to stevemillburg
mainsr
See my comment above for the ineligible players. Jeter, that's my screwup, though.
Reply to mainsr
MoreCowbell
It must be Tim Raine's whose name you hope to bold soon?
Reply to MoreCowbell
mainsr
Short answer: Yes.
Long answer: Hoo boy, don't get me started.
Reply to mainsr