The New York Yankees. They’re 27-time champions, they’re home to some of the greatest names in baseball history, and they’ve been out of the heat of contention for an uncharacteristically long time now.

The Yankees have been lining up pieces for what they hope is a new era of Bronx dominance since they sold off the big parts of their bullpen, Aroldis Chapman and Andrew Miller, in July, leading baseball folks to wonder “what are they up to?” Well, now general manager Brian Cashman is making it clear.

Last week the Yankees traded veteran catcher Brian McCann to the Astros in a move that clarified many things, one of which being that Cashman is smart. McCann, 32, batted a decent .232/.335/.413 in 2016 and, on nearly any other team, he'd be a starter. He’s capable and willing. But on the Yankees, he was an aging second-best option offensively and defensively. The job belongs to budding star Gary Sanchez.

Sanchez finished runner-up for the Rookie of the Year award after a mere 229 plate appearances. He’s younger, he’s better, and he’s under team control cheaply. What Cashman did was simply leverage the situation he had: a desirable catcher he no longer needed who was appealing enough to land him two prospects (one of which is highly regarded). He had to throw in $11 million to unload the contract and make room for Sanchez, but that was a small price to pay compared to the $34 million owed to McCann.

What do we know about Sanchez? We know a whole heck of a lot, but we also don’t know very much. Cryptic, I know. We know that Sanchez had an incredibly impressive rookie campaign, hitting .299/.376/.657 for a True Average of .332. Sanchez walked at a 10.5 percent clip, representing impeccable plate discipline for a rookie. His strikeout rate was high–just shy of one quarter of his plate appearances–but nothing that would tarnish his overall performance.

But what happens when the league adjusts back? The sample size is small and we know that a .657 slugging percentage is certainly not sustainable. Sanchez had the highest ISO in baseball (min. 200 PA) and also finished with the third-highest pull percentage at 54.1 percent. That may suggest the short porch at Yankee Stadium inflated his power production, but that’s not entirely the case.

Sanchez hit 20 homers for the Yankees–10 at home and 10 on the road. Perhaps in the future the short porch will aid Sanchez, but for now, it didn’t have much to do with aiding his raw power. That’s just talent. The potentially troubling part for Sanchez is that quite a bit of his meaningful contact came on pitches right down in the middle.

Take a look at his batting average map: 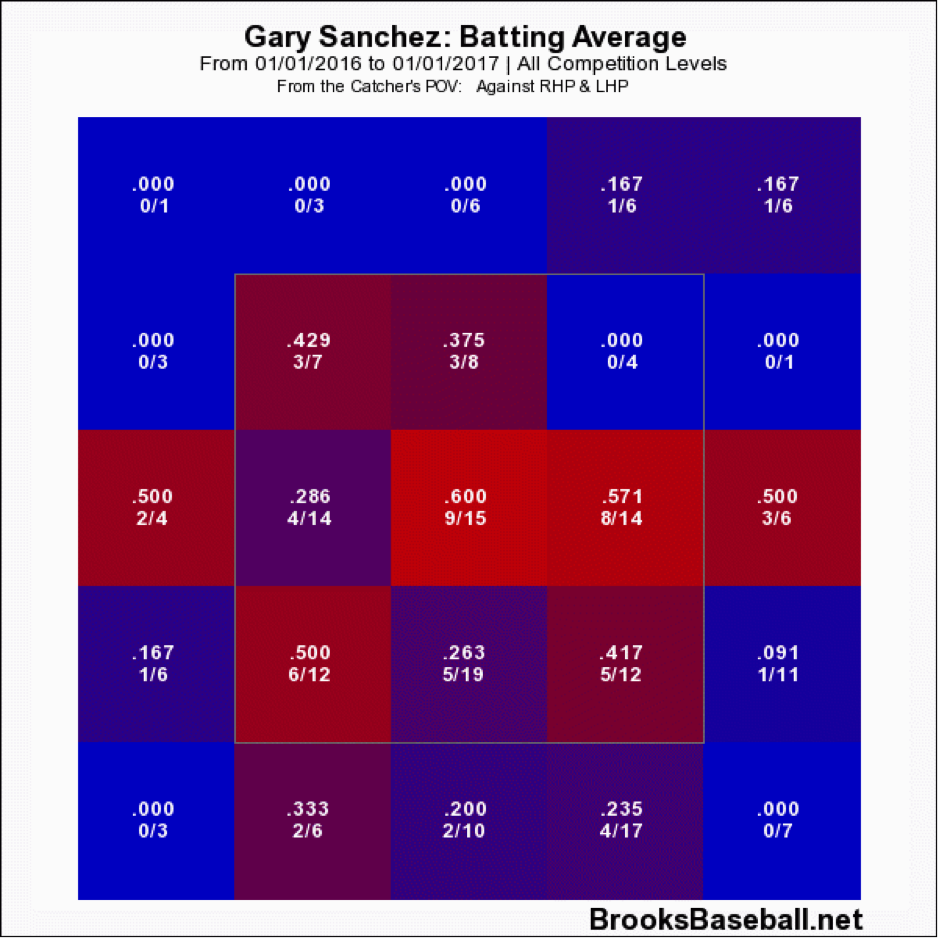 Furthermore, his isolated power map solidifies these findings even more: 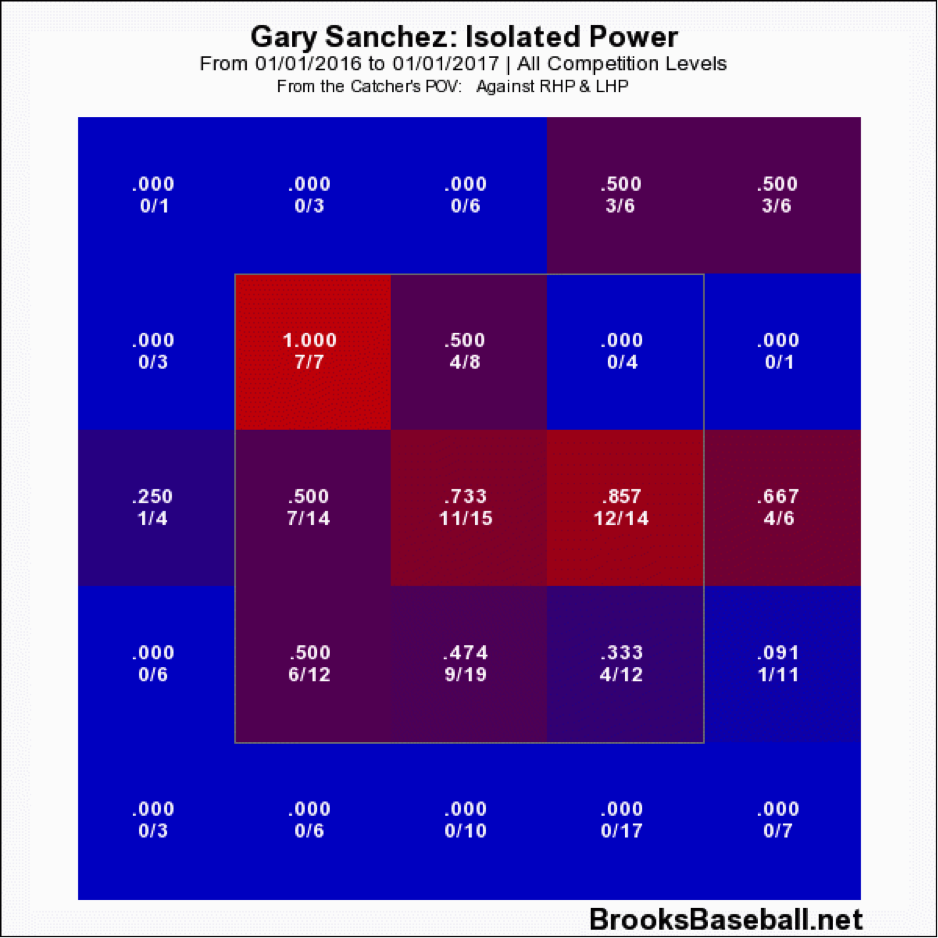 What this may indicate, when coupled with the plate discipline that Sanchez displays, is that the rookie didn't let mistake pitches slide. However, what can be a bit troubling is the source of all those strikeouts. Check out the pitches that Sanchez whiffed on: 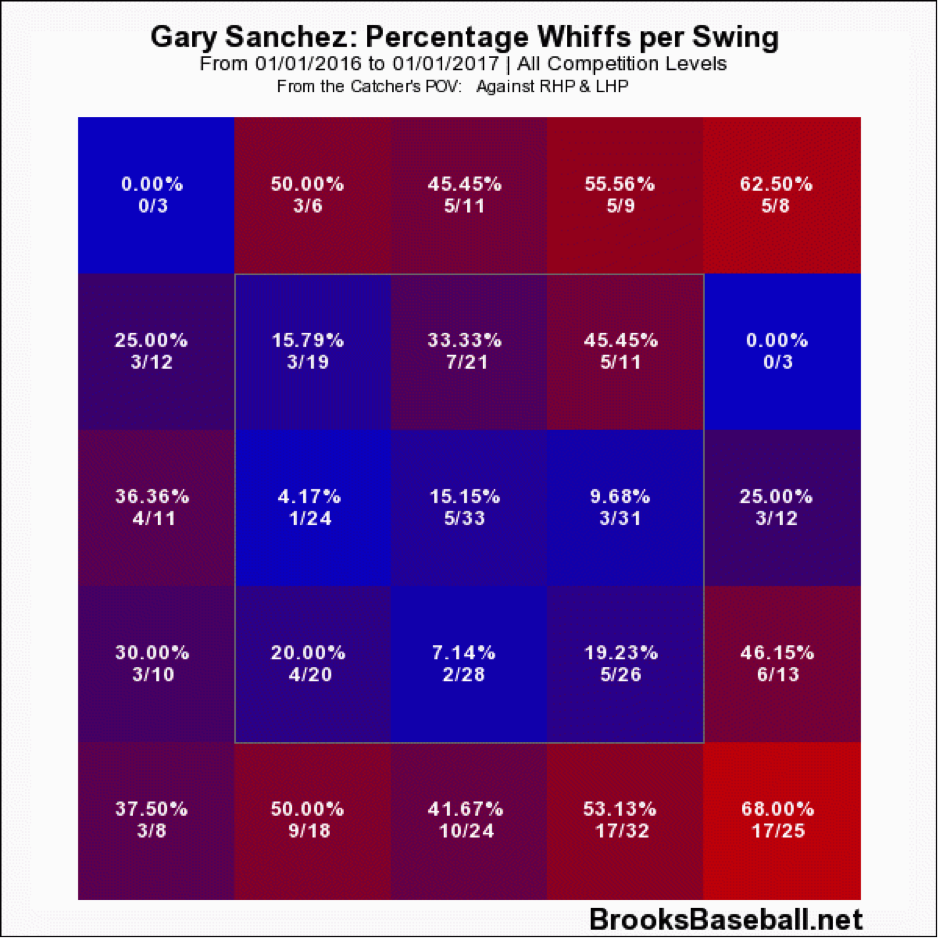 Low and inside, and high. Typical for a rookie, of course, but once pitchers begin to find Sanchez’s weaknesses and exploit his swinging tendencies, there is potential to see that high walk rate decline, taking the on-base percentage with it. The power production is due for regression, but even with a ton of regression Sanchez will still have league-average power, and unless there is some drastic fall off he will produce enough power to be considered elite at a position where slugging was around .400 in 2016.

Defensively, Sanchez has a cannon for an arm, and posted positive framing numbers among almost all catching defensive metrics. He wasn’t quite on McCann’s level, but he wasn’t too far behind. McCann has been a veteran catcher for 12 years. Sanchez has been playing the game for two months at the major-league level.

Take a look at the difference in defensive numbers:

The bottom line is this: The Yankees made an outstanding early offseason move, setting the tone for the rest of their winter. They’ve solidified Sanchez's status as the starter for years to come, they’ve cleared payroll money to give them financial flexibility to pursue the slim free agent market for a pitcher and another bat, and they’ve added quality prospects to their already budding farm system.

With the emergence of Sanchez, the McCann trade became a matter of it not when, and a matter how the Yankees could best leverage the situation. They moved quickly and accomplished the best of both worlds.

You need to be logged in to comment. Login or Subscribe
AndersonAdams1
Nice article. Two things: McCann was traded to Houston not Atlanta and when you say Sanchez's whiffs of on pitches are typical for a rookie is there evidence to back this up? I'd be interested in seeing data that shows how rookies improve on these pitches with experience.
Reply to AndersonAdams1
dianagramr
Good read!

"Sanchez had the highest ISO in baseball (min. 200 PA) and also finished with the third-highest pull percentage at 54.1 percent. That may suggest the short porch at Yankee Stadium inflated his power production, but thatâ€™s not entirely the case."

The high pull percentage would not jive with the short porch, as the porch is in right field. He DID hit some oppo homers, but most of his homers were to LF/CF.
Reply to dianagramr
jfranco77
Sanchez is a righty... there are a lot more whiffs low and away than low and in. Minor quibble, I know... but if anything scares Yankee fans about Sanchez, it's a 68% whiff rate on that far bottom right corner.
Reply to jfranco77
dethwurm
And that he swung at those almost as often as he swung at pitches right down the middle...
Reply to dethwurm