This is genuinely perplexing to me: Why isn’t times on base a more prominent statistic? Considering its integral role as the numerator in calculating on-base percentage, I’m surprised it isn’t on every stat line right next to total bases and extra-base hits. If OBP has taken precedence over batting average, why hasn’t times on base overtaken hits in importance?

Why do we continue to be impressed by 200-hit seasons, while 300-times-on-base seasons barely get mentioned? And don’t you think 300-300 seasons would be noteworthy accomplishments? It seems that they would be a nifty combination of a player’s power and on-base ability. Mike Trout, unsurprisingly, was the only member of this club this year, with 302 total bases and exactly 300 times on base.

I thought to myself, “hey, 300-300 club! That sounds like a fun stat!” Let’s evaluate it. Somewhere, I remember reading something about what makes for a good baseball statistic. I can’t find the reference, so here are some criteria that I made up:

There are probably other good criteria, but my goal here isn’t to develop an evaluative model for statistics, so let’s just say that Angus came up with something good.

Baseball has a tendency to define clubs by statistical performance. The 30-30 club (that’s 30 homers, 30 stolen bases) was a big thing for a while. When Bobby Bonds punched his membership card for the fifth time in 1978, he alone accounted for half the 30-30 seasons in baseball history. The other members were Willie Mays (twice), Henry Aaron, and the less memorable Tommy Harper and Ken Williams.

So let’s consider the 300-300 club. How unusual is Mike Trout’s membership in it? Well, it’s pretty cool, but it’s not exactly rare. With the caveat that the statistical record from some of baseball’s early seasons is incomplete, I (read: the Baseball-Reference Play Index) counted 118 times that a player’s had 300 total bases and 300 times on base in one year.

The top of the list won’t surprise you. Babe Ruth and Lou Gehrig did it nine times each. Barry Bonds did it seven times, and Ted Williams and Stan Musial six times each. They’re the only players with five or more 300-300 seasons. Jeff Bagwell, Jimmie Foxx, Todd Helton, and Rogers Hornsby did it four times. Jason Giambi, Albert Pujols, Tris Speaker, and Frank Thomas did it three times. Trout’s one of seven players with two 300-300 seasons; the others are Wade Boggs, Carlos Delgado, Charlie Gehringer, Mickey Mantle, Edgar Martinez, and Paul Waner. All good hitters.

Bill James created a stat called the Power/Speed Number that measures a player’s ability to hit home runs and steal bases. You can’t just sum individual home run and stolen base totals, or you’ll wind up with Mark Trumbo and Billy Hamilton among your leaders. James’ formula is (2 x HR x SB) / (HR +SB). A player with 30 stolen bases and 30 homers has a Power/Speed Number of 30.0. If the breakdown is 28/32, the Power-Speed Number drops to 29.9. At 25/35, it’s down to 29.2.

Here are the all-time career leaders:

No real surprises there, right? The top 20 consists of 20 no-doubt, first-ballot Hall of Famers, 20 percent of whom may not get in during our lifetimes.

How about single-season record-holders? Again, no real surprises among the top 20: 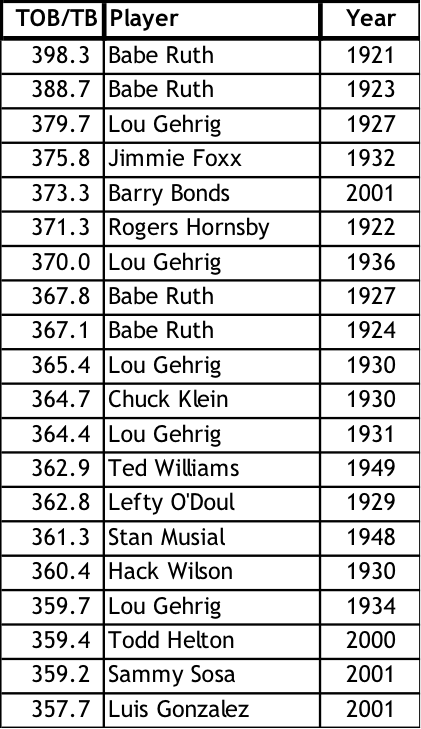 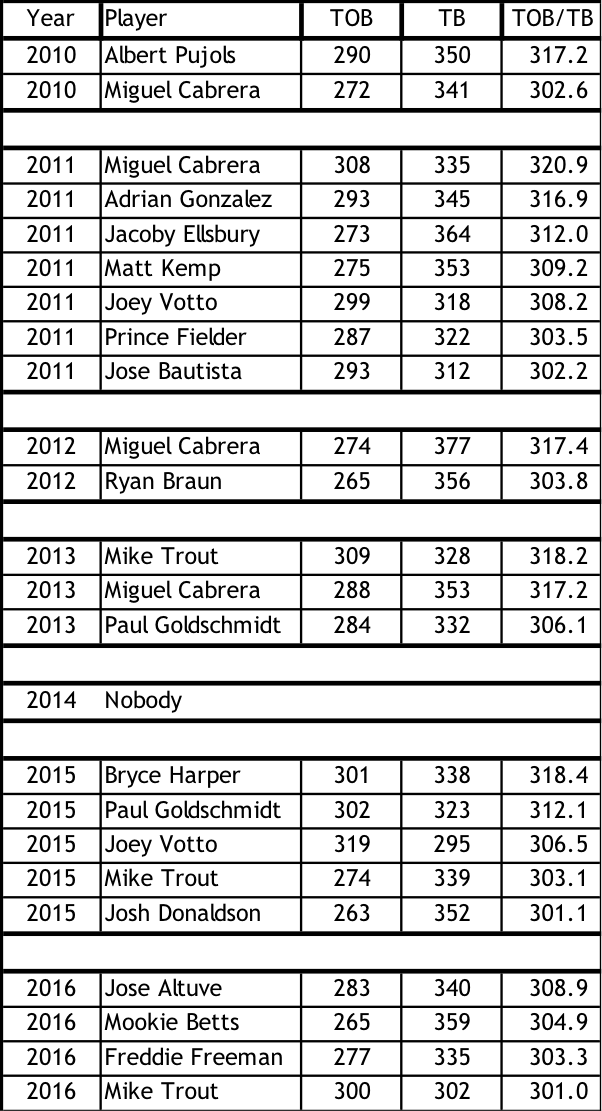 So Angus, good job! I like your club. It’ll be fun going forward seeing which players, other than Trout, get to learn the secret handshake in upcoming seasons.

*There has to be some sort of clever play on Hamlet here, but I can’t come up with it. I can get as far as to be TB. Can some clever commenter figure out how to put an or not in there?

This research would not be possible without the Baseball-Reference Play Index. Well, it’d be possible, but so much work that I’d give up on it.

You need to be logged in to comment. Login or Subscribe
bhalpern
TOB/TB or not TOB/TB? â€œThere is nothing either good or bad, but thinking makes it so.â€
Reply to bhalpern