The Diamondbacks shocked the world in April by demoting their 2015 Opening Day catcher, 32-year-old James Benjamin Gosewisch, to Triple-A Reno. He proved that he didn’t belong there, slashing .342/.399/.553 in the desert air, or somewhat above average for the league. He returned to the big league club in July after the team began its front-office-murdering swoon, and quickly proved he didn’t belong in the majors, either, hitting .156/.224/.289.

Now, he’ll hope to serve that same role, to somewhat greater effect, in a new capacity, having been claimed off waivers by the Atlanta Braves. There, if tendered, he’ll back up Tyler Flowers and Anthony Recker, although the Braves are still rumored to be in pursuit of hot commodity Jason Castro.

So that’s your Transaction Analysis. But what does it mean? Who, or what, is a Tuffy Gosewisch? To answer that question, I headed to Wikipedia, which contains this passage under the heading "Personal Life":

Gosewisch’s father gave him the nickname “Tuffy” because he was an especially destructive baby. “I used to break my crib and fall out and just keep on going and it wouldn’t faze me,” recalls Gosewisch.

The passage above links to an article entitled “Five Minutes with Tuffy Gosewisch.” Said article is archived behind a paywall, so the other four minutes and 40 seconds will remain a mystery. That the entirety of Gosewisch’s personal life is summed up in two sentences born out of the first three percent of his existence would seem to be an indictment on something or someone.

The rest of Google proved equally unhelpful. We know that Gosewisch has a wife and child. He’s a confessed crossfit fanatic. He hates the Oasis Motor Inn in Oleanta, New York. He lined out against outfielder Casper Wells and struck out against John McDonald in the same game. He went seven years between his first and second player comments in the BP Annual. His walkup music is "Beautiful Disaster" by 311.

Despite these important facts, we’re still missing something; so I consulted Gosewisch’s Twitter account, that always-reliable portal between common man and professional athlete. Since his call-up he tweeted exactly 17 times. Here is a breakdown of the subjects of those tweets: 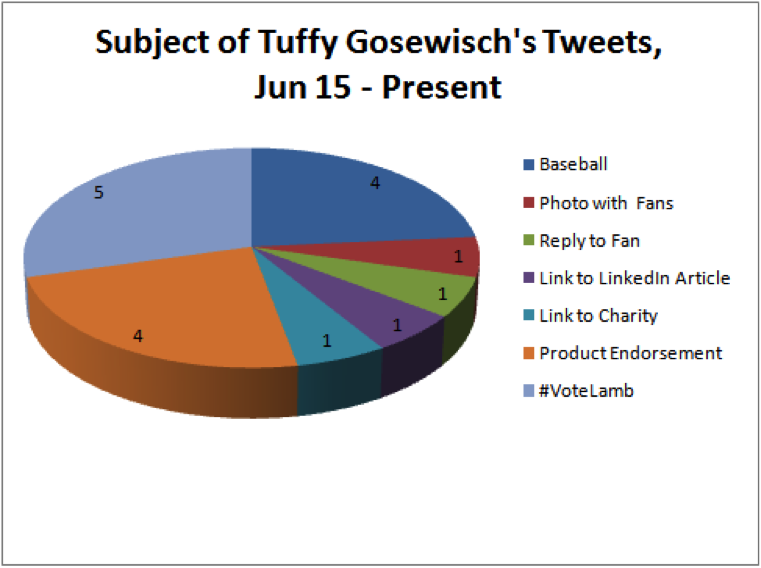 Clearly, questions remain. We’re talking about a human being, not a name on a roster. We still need to unlock the true humanity of our hero. So I made the most scientific investigation possible: I created an anonymous Twitter poll and posted it at midnight ET on a Friday night. The lone question: what do you think of when you think of Tuffy Gosewisch? Here, organized into haphazard buckets, is a summary of the answers: 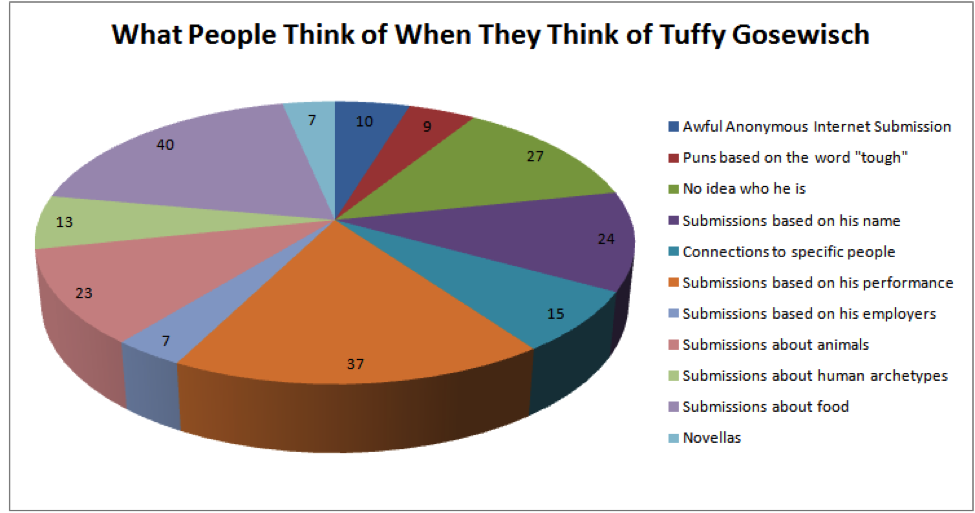 Some of these results require further breakdown. Let’s take them one at a time:

The only thing surprising about this is the poor showing of Guffy Tosewisch. I thought I knew Twitter.

No mention of actual Tuffy Stewart, who like Rhodes leads Gosewisch in career WARP by 0.7, 0 to -0.7. One good year is all it would take for the new Brave to catch up; don’t count him out.

People are naturally positive, even on the internet; they want to see the best in everything, even below-replacement catchers. The specific acts remembered by the three people at the bottom: “Stopped a lot of wild pitches against the Giants one time,” “Seeing his first home run in person! (exclamation point theirs),” and “That one time he dove for a foul pop-up.”

Honestly most of these don’t make a ton of sense. Geese I get, but ducks? Rabbits? The human mind is a mysterious thing. You could seriously connect anything to anything by reading a stray sentence. For example, I’ve heard that Derek Norris is a big fan of the film "Boxing Helena." Ten years from now you’ll see Derek Norris’ name on a leaderboard somewhere and think about misguided romantic thrillers using amputation as a plot device, and you’ll wonder why. Hopefully you forget why.

We’re getting closer, here. There something along the edges of a truth, that Tuffy Gosewisch isn’t just one of things, but all of them, a name and a catcher and a three-toed sloth and a line judge in a 1983 Arkansas-Alabama game all at the same time. The question never was what is a Tuffy Gosewisch. The question is: what isn’t?

Some final thoughts, culled from the longer responses:

I just bet that Tuffy would help you move no matter how many times you asked him to. Like you could hit him up to help haul your crappy furniture up and down three flights of stairs twice a year and he'd do it if you promised to buy him a cheeseburger (no pickles). Wouldn't say a peep except to say that your new place looks homey.

I think of a rookie making his major league debut — the moment he's been dreaming of his entire life — walking up to the plate for his first career plate appearance, greeting the home plate umpire and hoping to share a few words with a great catcher like Buster Posey or Yadier Molina, only to realize Tuffy Gosewisch is behind the plate and quit baseball in disappointment.

It is a warm summer night in Tacoma. One kid is content with a hot dog and the promise of cotton candy later; the other needs something more than minor league baseball can provide, and is commando-crawling between rows of seats, collecting popcorn hulls and long-forgotten gum on her shirt. Now batting for the 51s/Aces/Beavers/Dodgers/Whoever, Tuffy Gosewisch. Or Konrad Schmidt. Same deal, same generic pseudo-memory:

A recent M's minor league free agent pick looks in for the sign as the PCL lifer digs in.
I notice, somehow, that the first base coach is now Carlos Peguero. The Australian accent of Trent Oeltjer calls out instructions to the outfielders. Mike Wilson patrols the aisles, hawking peanuts. Dustin Ackley exhorts the fans to make some noise, politely and unenthusiastically. Jemile Weeks is umpiring. My wife looks oddly like Chris Taylor. Brad Mills looks up at me, his jersey covered in popcorn and gum.

Baseball is nothing but ants dancing for my enjoyment

There it is. We are Tuffy Gosewisch. We have been claimed off waivers by the Braves. We are dancing for each other.

You need to be logged in to comment. Login or Subscribe
huztlers
Cannonball Titcomb!
Reply to huztlers
LlarryA
People say that nicknames are dead, but the last names to pair with them have lost something along the way as well.
Reply to LlarryA
adecker31
I see him as an Encyclopedia Brown type...:

It was a slow day on Alexander Graham Bell Drive, one of those summer days where school is still years away and the clouds cross the sun like it's an afterthought. The backboard in the driveway was dusty with disuse and hinted that the last time there was rain it was a different month, it hadn't been used then either.

Tuffy Gosewisch watched all the nothing with the jaundiced eye of one used to such afternoons, in fact he kept a side business for just such days as this, when even the clouds couldn't keep the heat off, "Lemonade, 31 Cents" read the sign to his right. In a glass pitcher some ice tilted gamely at the sides like they knew there was a larger world out there, but the lemons were doing their work. There was a kid walking down the street, Jimmy Fowler, funny, he usually didn't walk. Tuffy watched him walk up the driveway.

"What's up Tuffy?"
"Same things as yesterday, ain't summer grand Fowler?"
Fowler shook his head and looked around the garage. A Will Clark poster hung against a door to the backyard, a fistful of darts piercing the body with one to the face.
"Still bitter, huh?"
"Not bitter enough."
"I'm not talking about the lemonade." Fowler pointed his head toward the poster.
"Neither am I."
"I get you. Look. I heard you found ZoZo's book bag last day of school. Dag Altwood is a tough character but you handled him and his boys and you handled them easy."
"Not so easy as that Fowler, but I haven't had nightmares in a week."
"Whatever Tuffy, look, somebody's got my bike, and get this..."
"Get what?"
Fowler held up a note.
"They're keeping it hostage."
Reply to adecker31
bubba3m
Tiffany Trump?
Reply to bubba3m
jhardman
Speaking of Encyclopedia Brown, did Bugs Meany ever play baseball?
Reply to jhardman