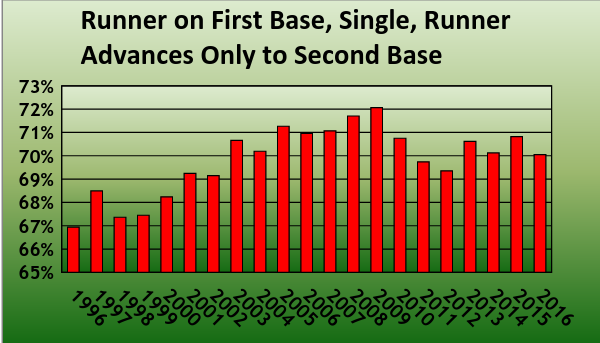 See what’s going on? Baserunners are less likely to go first-to-third on a single than they were 15-20 years ago.

To illustrate what’s going on with stolen bases, I used graphs like this: 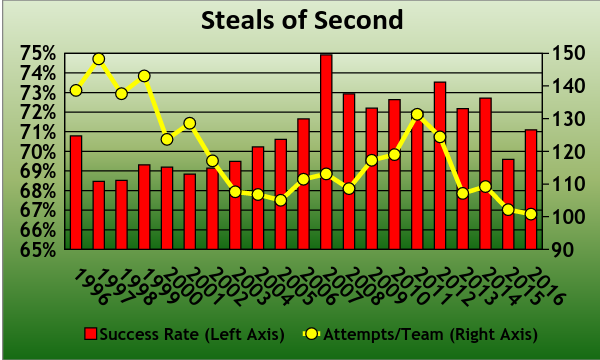 Out of curiosity, I decided to insert a yellow line like the one on the latter graph onto the first graph. Rather than try to explain it, let me show you: 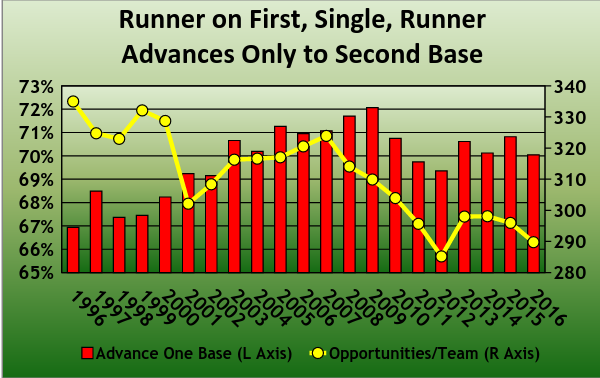 Those red bars are the same ones I had at the top of this article. The yellow line represents the opportunities to advance from first to third on a single. And as you can see, they’re way down. To which I said: Huh? Stolen base attempts are down because managers are calling for fewer stolen bases. But the mere fact of a runner being on first when a single’s hit—that’s not strategy. That just happens. Why is it happening less?

Let’s explore the other opportunities to advance on a hit. Here’s a runner on first when a double’s hit: 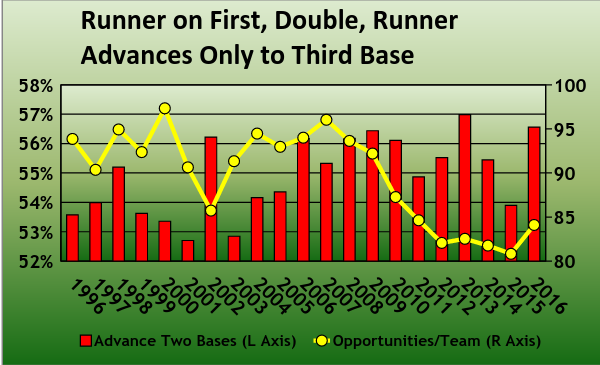 Same story. There are a lot fewer times that there’s a runner on first when a double’s hit.

And a runner on second when the batter hits a single: 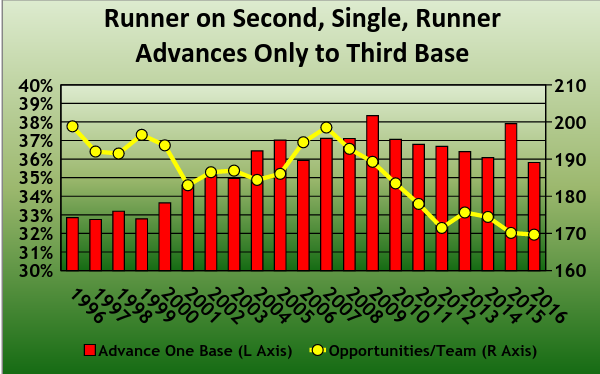 Again, those downward-sloping yellow lines don’t represent a strategic shift. It’s not something managers or coaches dictate, like stolen bases or sending a runner. Rather, something’s different in the way the game is played.

Let’s start with runners on base. Here’s a graph showing the percentage of plate appearances from 1996 to 2016 that occurred with a runner on first: 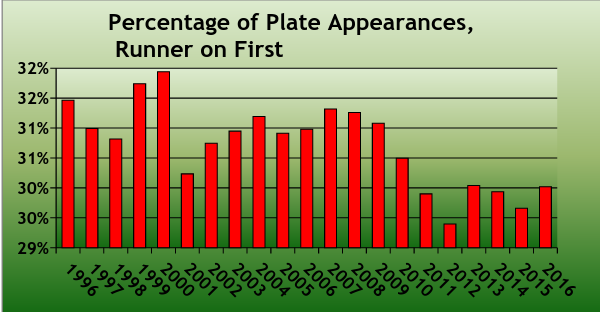 And with a runner on second: 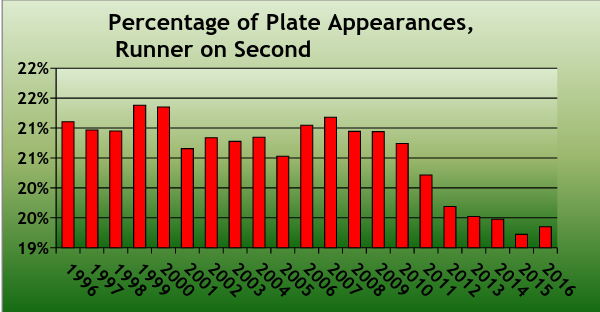 But why is that? Why has the frequency of runners on first or second declined?

There are a lot of ways a batter can get to first or second, of course. Let’s start with getting to first. The most common way is via a single. How’s that fared? 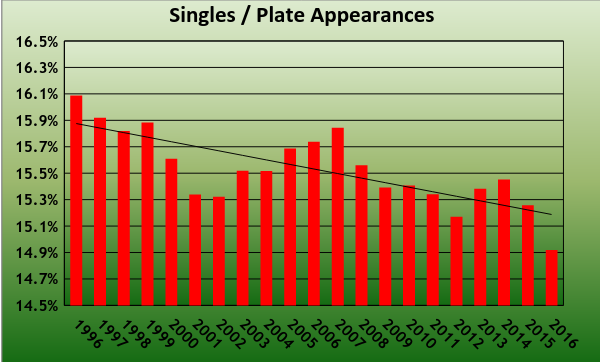 I added a trend line there, but it’s pretty obvious. Singles are down quite a bit. How about walks and hit batters? 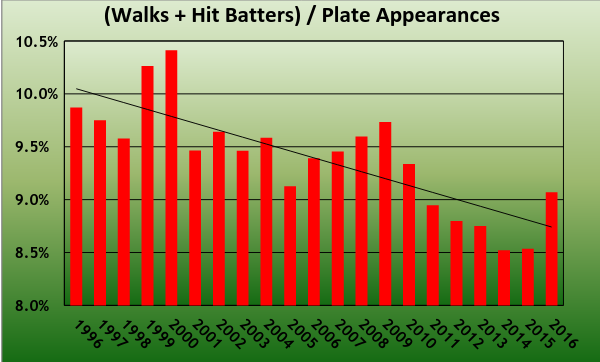 Same story. As an aside, this is mostly due to walks; hit by pitch rates have remained historically high. If we combine the two, we get this: 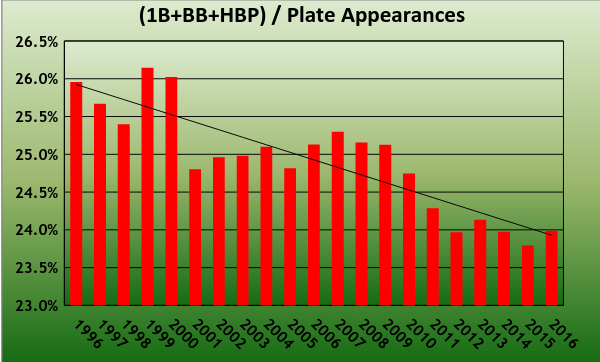 For every 100 batters who got on base via a single, walk, or hit by pitch in 1996, only 92 did in 2016. That’s a big drop, helping explain at least part of why there are fewer opportunities for runners on first to go to third on a single or to score on a double.

Runners on second can get there by starting at first and getting advanced to second by a subsequent batter. Or they can steal second, which as I noted in the last article, was attempted in 2016 at the lowest rate in over 50 years. Or they can be advanced by one of those increasingly infrequent walks, hit batters, or singles. (Yes, I know there are other ways to advance a runner from first to second, but stay with me here.) Or they can hit a double: 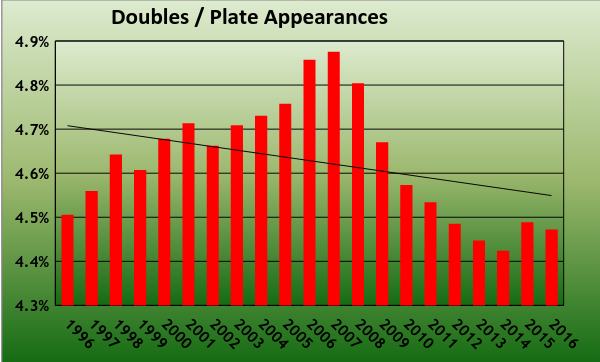 Doubles are down too, but not by much. They’ve stayed in a pretty narrow band.

So here’s what appears to be going on:

Looking more broadly, fewer runners are getting on base via a single, walk, or hit by pitch, and there are fewer singles with which to advance them. How unusual is that? Well, we have a lot of data. Let’s look at the two-league era beginning in 1901: 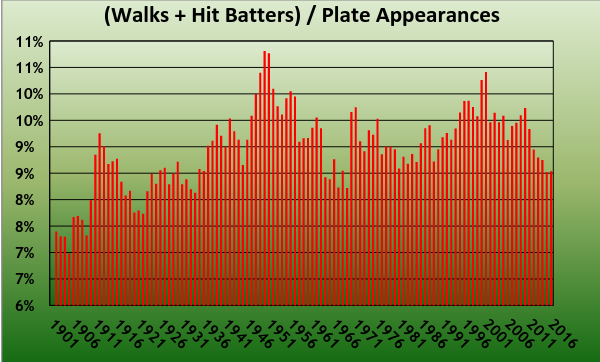 There’s not much of a long-term trend there. Since World War II, the trendline’s almost flat. The recent dip in batters reaching first by a walk or hit by pitch is not unusual. 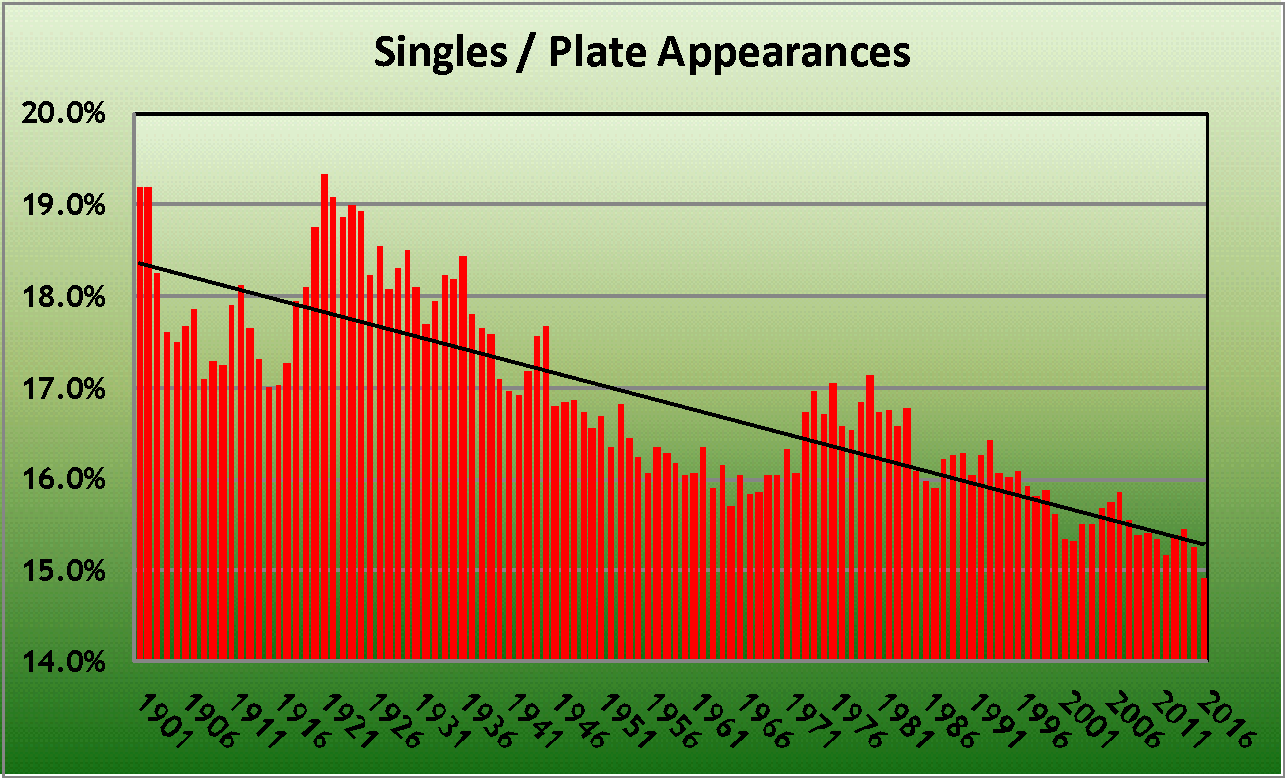 OK, I made up that last one. But everything else with which I bludgeoned you is true. We’re seeing a lot fewer singles, resulting in both fewer runners on first who can take an extra base and fewer opportunities for runners on second to score on singles. So, as it turns out, there are two reasons why we’re not seeing baserunners take an extra base on hits as frequently as in the past. One is that they, or their third base coaches, are being more cautious. But the other is that there are fewer times when a runner’s in a position to take an extra base. And the reason for that is singles.

And what’s behind the decline in singles? Well, a lot of things. All-or-nothing uppercut swings. Better fielders. And, this one’s kind of risky—opens door a crack, yells SHIFTS, quickly closes it, locks it, and hides—well, if not shifts themselves, then better defensive positioning overall. Is it OK if I say that? A rocket down the line, a shot into the gap, or a ball hit over an outfielder’s head—those are going to be extra-base hits. Some singles are ripped as well, but there’s Crash Davis’s “gork, a groundball with eyes, a dying quail” and the proverbial past-a-diving-Derek Jeter grounders that a fielder positioned a yard or two differently might turn into a 6-3 or an F4.

So fewer singles is a well-established trend. But the ripple effects are significant. It doesn’t mean just that there are fewer runners standing at first, chatting with the first baseman or conferring with his first base coach. It also means that other exciting plays, including a runner advancing from first to third or from second to home on a single, are occurring less frequently as well.

You need to be logged in to comment. Login or Subscribe
bballbomb9084
Hogwash! Damn your data, this is just natural variation in the Earth's singles cycle, you big dummy.
Reply to bballbomb9084
mainsr
Probably that's it. I'm married so not plugged into the singles scene anymore.
Reply to mainsr
Grasul
I have to think you meant more walks than singles, not balks.
Reply to Grasul
Grasul
err, nevermind, should have read to the end. Who put the joke in the next paragraph? :)
Reply to Grasul
mainsr
I did that just to mess with you.
Reply to mainsr
yibberat
And I'll bet the cause of this is the emphasis on the HR and the individual plate appearance. For any individual batter, going for the HR is gonna be all-or-nothing result (HR or outs or K). When you have an entire lineup of guys who are going for the homerun, then there's not much point in being the only guy in the lineup who's slap-hitting singles.

If anything this shows the growing emphasis of sabermetrics. Saber is all about the individual stripped of team context. What they do in the batters box is everything. What they do on the bases depends too much on what other players around them in the lineup do so it is difficult to measure and hence undervalued.

Baseball may not be a true team sport like basketball or football. But the emphasis on attributing/allocating everything to an individual in isolation MUST strip the sport of whatever team aspects the sport does have.
Reply to yibberat
mainsr
I'm not sure it's all an HR thing; I would've expected some leveling-off after the steroid era. But I'm a little at a loss here, as you could probably tell. I'm hoping one of y'all bails me out...

I agree that baseball lends itself to division into discrete events. That does make analysis a little easier.
Reply to mainsr
onlyalad
Bill James talked about the rise in strikeout rates in the "Hey Bill" section of his website recently. He noted that the emphasis, from the time players are in high school to the time they're in the majors, is on bat speed to the virtual exclusion of all else. That thinking pervades everything from the minors to pony league to Latin American academies, because they're all taught by guys who played in American organized baseball and learned the same lessons. The players who defy that thinking are at a disadvantage in every stage of their careers, and so you see very few singles-hitting, high-BA players these days.

Japanese baseball doesn't have quite the same emphasis right now, and so you see more of an emphasis on contact hitting instead of pure bat speed and power.

Anyways, while I think the trend lines on HR per PA over the past century would tend to be similar to Singles/PA(just, you know, inverse), I think the greatest (inverse) correlation would be with strikeouts/PA. As you pointed out, the last time we had more singles than K's was in 1994. I would imagine it's only gotten more stark over the last twenty years.

So I think this is a cultural thing, and you're right to point out that it's not so much managers as it is just how the game is played right now. It takes a lot to change the culture of the game, particularly when you're dealing with something as fundamental as how a player approaches each PA and constructs his swing.
Reply to onlyalad
mainsr
Great insights, thanks. As I said in a previous comment, I was hoping for y'all to help me come up with an explanation. You may have done that!
Reply to mainsr
lmarighi
I think it would probably be more accurate that a batter going for a home run means fewer singles, but I think sometimes you still get doubles off a "HR swing". I also think that while you are correct that there has been a big emphasis on context-neutral views of what batters do at the plate, part of that is also very much "don't make outs", which seems like it would cut against going too much all or nothing.
Reply to lmarighi
mainsr
Fair point. Zulu's point above about contact hitting gives me an idea about this.
Reply to mainsr
DrDaley
Put Pete Rose into the hall and that could be an inspiration to players that singles matter, that hustle and ....err...then again, maybe it be best to leave things as they are.
Reply to DrDaley
worldtour
Great article! Serious historic trend going on, and no one else seems to be talking about it. It's only home runs and strikeouts out there beyond BP.
Reply to worldtour