Desperate as we are to remind everyone that baseball isn’t dying and that teenagers have been found who speak favorably of it, the grandeur of the game depends in no small part on its history. The labors of forgotten, dead accountants still benefit us: We know how many bases John Gochnaur stole without even the seemingly crucial step of knowing who John Gochnaur is. This history provides context for who we are and how we have been shaped, the shifting of cultural norms, like the chloroform John McGraw used on runners tagging up on fly balls, or Jay Bell’s 40 sacrifice bunts in 1988.

Fun facts, too, owe their fun to history; it’s the sheer volume of existence, the trillions of ground balls to second, the thousands of players who lived out their dreams and yet failed to make a single mark upon the game, that give the uniqueness of every "fun fact" its buoyancy.

Such a simple construct as a fun fact would seem like an unchanging concept. And yet fun facts have their own evolution. In the mid-80s the fun fact was going through its own adolescence, much like a nation experimented with Devo and Bret Easton Ellis. We still have these prototypes, thanks to the existence of 1984 Fleer baseball cards. 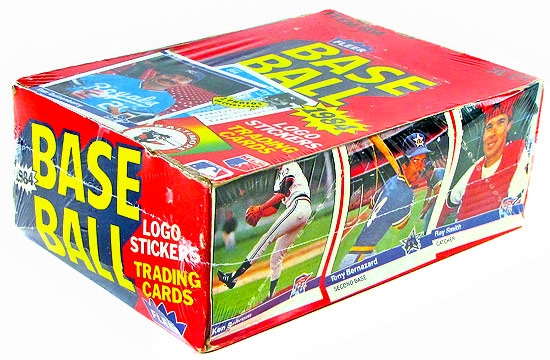 Ordinary in all other senses, these Fleer cards sometimes contained a headline “Did You Know?” followed by bullet points of things that you, the card collector of 1984, might not (but perhaps would like to) know. I, too, am a historian; all writers are. For the benefit of history, then, allow me to organize this nascent trivia and spend some time reflecting on who we were, 32 short years ago, and what we’ve become.

FUN FACTS THAT WERE NEVER FUN

This is, I think everyone would agree, a terrible fun fact. It requires three different qualifiers to create its category, then employs it to establish some of the least fun facts conceivable. Worst of all, there were literally two Mariners rookies who played 100 or more games in 1982. The lesson: writing baseball card copy isn’t easy, especially when the player in question is one of the worst of his era.

It would be more fun, from a probabilistic standpoint, to list when a player does not enjoy hunting and fishing.

Steve Rogers (284) – Collects coins and Indian arrowheads and is a connoisseur of crossword puzzles.

See? Not fun, still, but we’re getting somewhere.

College majors aren’t really fun facts, unless they’re somehow ironic. This is not ironic. But it would be nice for them to show up on Baseball-Reference so Russell Carleton can run a study correlating liberal arts degrees to baseball success. Side fun fact: Gossage played for the Rangers in 1991, which means that the pre-Twitter baseball world missed out on at least a half-dozen above-average puns.

Not quite a fun fact, but also phrased badly. “Had a victory against 10 different National League clubs in 1979” is a better way to put it, and “it” isn’t something that even has a name. Winning for the cycle?

On the one hand, it’s pretty easy to set records when you’re only competing against yourself. On the other hand, Mr. Leach, I have some very good news for you regarding the official status of the game-winning RBI.

Sometimes it’s better to just say nothing at all.

It’s still a little fun, even if Lynn’s rookie season is the only reason most people would recognize him. But this is an example of how time dilutes all our accomplishments: Lynn’s two major feats (this and winning the ROY and MVP in the same year) have each been duplicated since, the former by Mark McGwire in 1987 and Jose Abreu in 2014. This is the fate of all innovators: the success you forge will draw people that will imitate you and rob you of your vitality.

Claudell Washington (192) – Has 3-homer games in both leagues, only others to do this were Babe Ruth and Johnny Mize.

A throwback to the days when the different leagues meant something. At the time, being on a list with Ruth and Mize was pretty neat, no matter what the conditions; now, he shares the distinction with 11 new players.

Gary Matthews (40) – Has averaged more than a hit a game in his career.

That sounds really impressive! It’s a little impressive. Actually 290 hitters have played at least 1,500 games and accomplished it, including such luminaries as Mark Grudzialanek, Edgardo Alfonso, and Eric Young Sr. It also does not include Gary Matthews, who got used as a pinch-hitter in his final season and fell 22 hits short.

A strange one. First, it’s wrong: Tellmann struck out 5.5 per 9 innings, not “almost five.” Give the guy some credit. And besides, while three qualified starters in all of baseball failed to crack that number in 2016, for Tellmann’s Hawaii team he actually ranked fifth. Still, being fifth on your minor-league team in strikeout rate is a pretty strange career note. What was the motivation? Was it a source of hope to stand against his 3.7 total in the majors? A sheepish excuse for giving him a card at all.

FUN FACTS THAT ARE LEGITIMATELY FUN

Players get re-gifted all the time, but this is still pretty fun for a couple of reasons:

Is it really a record? I’m not sure it’s a record. But it is something that’s only happened three times this decade, so to have it happen during the World Series, and for it to be an actual positive accomplishment, makes it pretty cool.

Gary Ward (576) – Was the centerpiece of situation probably never before witnessed in Major League baseball–on Sept. 11, 1982, in Kansas City, he was the only non-rookie in the Twins ten man starting lineup!

You know Fleer is really worked up about a fun fact when they unleash the exclamation mark. That said, this is a pretty fun fun fact. The only problem: did anyone know this at the time? Did Ward? Was he able to lord it over the rest of his teammates, make them carry his gear and tie his shoes and sing songs in praise of him after the game? (The 50-91 Twins, who were so bad they got an SI cover celebrating it, lost 9-3. Ward did hit a solo home run.)

Benny Distefano has done it since, but even so, this is pretty close to an ideal fun fact.

Gary Redus (481) – Broke in with one of most incredible records in baseball history with Billings in short season Pioneer Rookie League, where he batted .462 with 117 hits, 100 runs, 62 RBI’s and 42 stolen bases in just 68 games–average was second highest ever recorded.

OK, sure, demerits for just listing off numbers that are already there on the top of the card. And from a predictive standpoint, the 1.346 OPS season was a tiny bit of a fluke; Redus was a 21-year-old in rookie ball, playing for a team that went 50-18 and averaged 7.5 runs per game. Also, he was Gary Redus. Despite all that, despite Redus’ season being an outlier among the outliers, it deserves some celebration just for the display, in a league with official numbers, of plain, Bonds-level dominance. We should all be lucky to hit .462 in 325 plate appearances anywhere, at anything, in life.

FUN FACTS THAT ARE JUST WEIRD

This fun fact is probably more fun now than it was at the time. In 2016, 33 relievers averaged 95 mph, including Brandon Maurer. More importantly: is the question still true? Is the property “blazing” dependent on a fixed quality, or is it relative? I could see the argument being that to blaze a fastball would mean to throw it at a velocity that exceeds the hitter’s ability to handle it. Have hitters gotten better at hitting fast fastballs?

As an internet pseudo-writer, I feel for Bob McClure. We’ve all worked hard on articles, spent days editing and tweaking and worrying, only to have their publication overshadowed by a presidential soundbite or a meme dominating Twitter. Did Bob McClure’s mom stay up to watch her son take the mound for the first time? Did she fall asleep in the armchair, only to wake up to Dialing for Dollars?

Chili Davis (370) – Nicknamed Chili when a young boy because neighborhood friends thought hair looked like it had been cut with a chili bowl on his head.

Chili is, independent of this fact, a fine nickname. It has a strong meter to it. Dependent on this fact … look. I don’t have a nickname. But if your nickname is really based on how bad your hair looked at some point in your life, don’t you really want to be free of this link to your past? Do you want to shape a significant portion of your identity around it?

And yet not Vince, nor Victor, nor Vivian, nor even Vladimir. Vance got off pretty light compared to Varlin.

Look, I get it. Even though it was morning again in America, and the only reason there weren’t two cars in every garage was because there weren’t garages big enough to fit two American-made automobiles. The minimum baseball salary (which Lynch surely made) was $44,000, which is about $100,000 today, but imagine how much of that went into tuning up two Camaros. So it’s fine that Lynch made some cash on the side. But while you’re imagining, imagine asking this man to reverse your overdraft fees.

Perhaps Fleer provided no epiphanies above; if they did not startle, I hope they amused. Perhaps they strike one as the clumsy crayon-drawings of distractible children. So, too, will your attempts at wisdom, your fun-based facts, 30 years from now. The game, and history, march onward. Don’t apologize to the future for your ignorance. Carve out whatever fun you can in the facts at your disposal, for the next generation.

You need to be logged in to comment. Login or Subscribe
lipitorkid
In 1984:
Dell sold its first computers out of a college dorm room.
The term cyberspace is coined by William Gibson in his novel "Neuromancer"
Chrysler introduced America to the Minivan.
Michael Jackson's hair caught on fire during the shooting of a Pepsi commercial.
The first infomercials appear on TV due to deregulation by the FCC.
"Footloose" ... Soundtrack was the number one album of the year beating out Prince's "Purple Rain."

1984 was a weird year.
Reply to lipitorkid
jnossal
I got laid.

Twice.
Reply to jnossal
cmellinger
Just what I needed this morning.
Reply to cmellinger
psavio
I seem to remember the fun fact on one of (current Padres color guy) Mark Grant's card was something like, "Mark sells men's dress shirts in the off-season." My wife repeats that line as a mantra every time she hears his name.
Reply to psavio
LlarryA
One of the best 'wrong' fun facts ever was in the mid-'70s, (73 or 74 I think) Topps told us that Sparky Lyle liked "to eat birthday cake".

What Sparky really liked was to drop his pants and *sit* on other players' cakes...
Reply to LlarryA
Chiefsnark
Mike Henneman also made his debut after midnight back in 1987 and my friend did not at the time that he was likely one of the few major leaguers to make his debut in the morning.
Reply to Chiefsnark
jfranco77
I love these articles.

And of course Tom Herr's 2-RBI sac fly is a record... nobody ever drove in 3, did they? Apparently Tommy Herr is tied with Johnny Vander Meer having the most unbreakable record in sports!
Reply to jfranco77
jnossal
Plus all those guys who knocked in four runs with a single homer.
Reply to jnossal
cdgarosi
To everyone's surprise Ed Lynch made $240,000 in 1984 and $118,000 in 2013 per Baseball Reference
http://www.baseball-reference.com/players/l/lynched01.shtml?mobile=false
Reply to cdgarosi