Let’s all admit something: Game 2 was a clunker. This game was the first car you have in high school. You’re pleased to have a car, because any car in high school is great, but every time you pick up your friends you worry it won’t start and you’ll need a tow. It’s better than the rusty bike you had, which also was better than walking, but if a rich kid in your class drove by, you’d feel self-conscious.

Arrieta threatened to throw a no-hitter, then didn’t. Bauer threatened to cut off his own finger to remove any doubt his drone wound would bleed like it did in Game 3 of the ALCS, but entered the field fully intact. The rain threatened to end the evening before it began, then to prolong it further, but did neither. The only promise the game made that it kept was that it would end, but with a 4:04 run time even there it took it’s time.

Multiple parts of two exciting teams conspired to deliver something sloppy. It wasn’t the exclusive domain of any one player but as so often happens in games like this, a performance or two will stand out, and this was no exception. 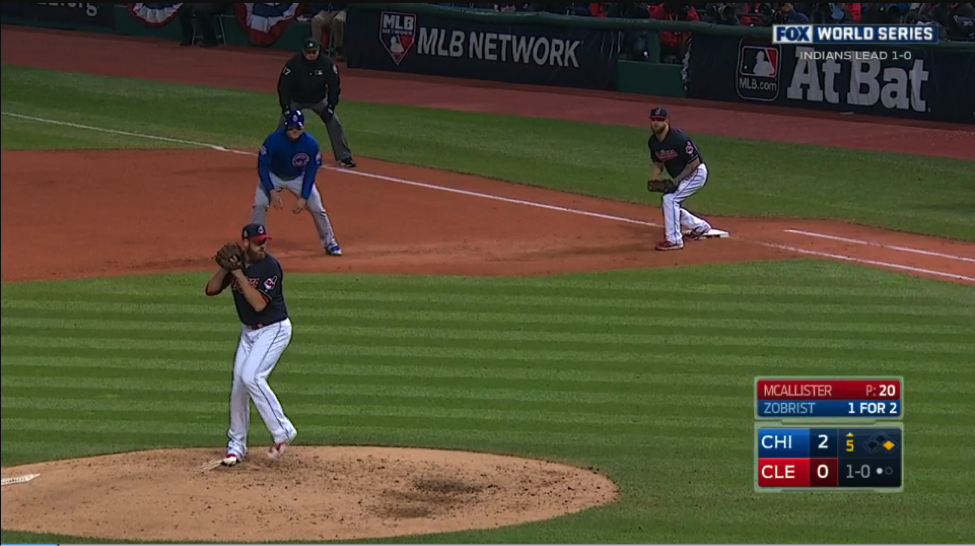 You can’t see him here. Lonnie, ever the professional, was in right field. It’s the top of the fith. Zach McAllister was on the mound in relief of Bauer, who didn’t bleed all over himself but also didn’t make it out of the fourth. Anthony Rizzo was taking a lead at first.

The game could be measured in the generations of fruit flies that had come and gone. Cleveland hadn’t recorded a hit against Arrieta, but with just two runs on the board, they could have gotten right back in it. They just needed to hold on.

In the field, Chisenhall’s career has been an odd sort. This year, FRAA rated his defense as slightly positive, DRS saw him as basically neutral, and UZR crushed him. What they all agree on is that the great defensive strides we saw after he switched from third base to right field have shifted dramatically to the negative. Mark Trumbo’s 0.5 FRAA is better than Chisenhall’s 0.2. It’s a small nit to pick, but come on! Mark Trumbo in the field.

Or to put another way, it’s a nit that looks like this: 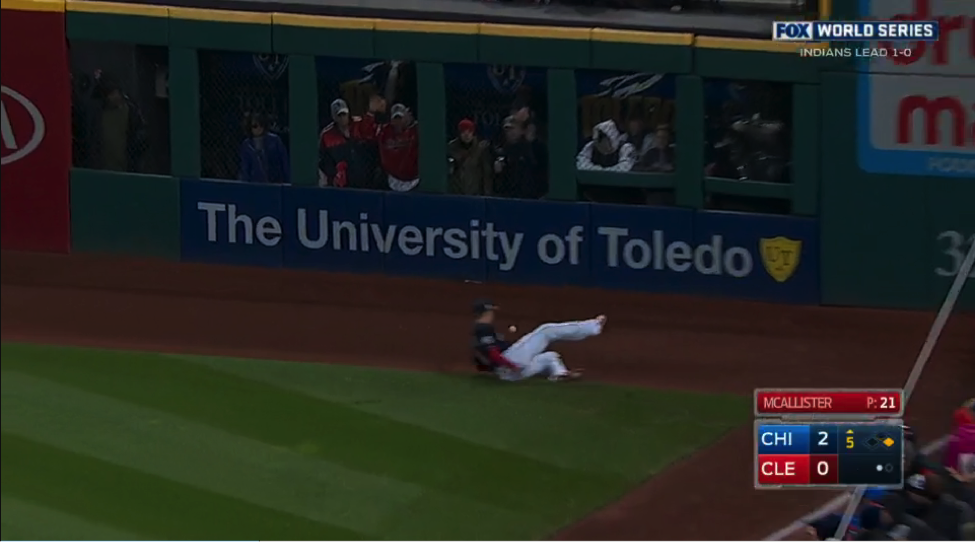 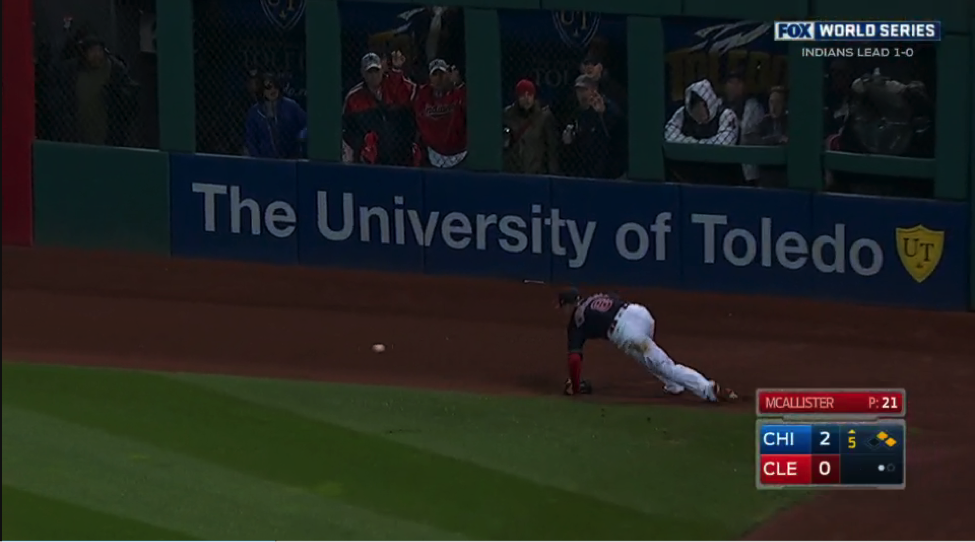 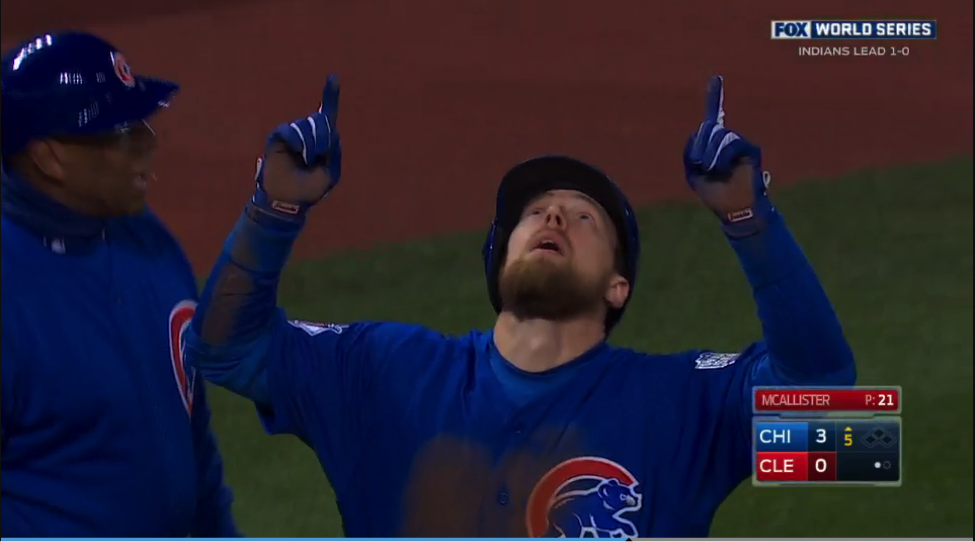 It was a costly mistake. He allowed Rizzo to score, and Zobrist to advance to third with just one out. Schwarber would knock Zobrist in, and after a defensive miscue on Jason Kipnis’ part, Schwarber scored on a bases-loaded walk. Moreover, it wasn’t Chisenhall's only blunder of the evening. In the first inning, he decided to throw to second base instead of home on a Rizzo double, and allowed Kris Bryant to score. He screwed up, and then he screwed up again.

And it’s cruel, really. In 2015, Chisenhall finally seemed to have found his spot. His comment in last year’s BP Annual lauded the turnaround:

“His move from third base to right field transformed him from an indifferent defender to, so far, an excellent one. Playing deep in right allows him to show off good range coming in on fly balls and a powerful arm, flipping his defense from liability to asset on the team's balance sheet.”

An asset to a liability. I imagine that if your play in the field is considered a liability, you know about it. I bet you wake up with that knowledge and carry it with you all day, and it eats at you. Worse still, more often than not, you just are what you are. You’ve reached the bigs, you’ve had your chances, but what there’s room for is mostly aesthetic. At a certain point, you stop changing. You have to live with yourself.

Or you’re Lonnie Chisenhall and suddenly, you’re an asset. Your team thinks of you differently. Your future looks rosier, so long as this sticks. You sleep better. You buy a new car. But while Lonnie was out buying a new car, we were waiting for him. We were never really sure if we believed it. He had the audacity to change while we remember who he was before. We couldn’t prove the negative that he didn’t stink, so we just had to watch and wait for him to fail.

Every screw up becomes a chance to say “uh oh” and exchange meaningful glances. Maybe we’ve revealed him to be a clunker with a new coat of paint. All the while I imagine he’s worried that each new screw up, even if they’re occasional and part of the gig, is a sign he’s used it all up. His reservoir of change is dry, and he was never special to begin with. He’s back to not sleeping well. And then he has a night like Game 2.

On its own, it wouldn’t matter. We’re all different degrees of broken down on any given day; we all fall down. But in a seven-game series, it isn’t just a screw up. It isn’t just falling down. It’s “uh oh.” It’s the shift from transformative to stooge. From hitting a three-run shot against David Price, to an inning where three Cubs runs score. It’s being able to prove the negative.

This game was a clunker, and Lonnie Chisenhall had a bad night. We might do well to remember that the poor guy is just trying to sleep at night. He might be more like the old car we used to know than the fancy one we saw in 2015, but hey, he’s still a car. Cleveland has to hope he can run a little longer. After all, it’d be awfully nice not to have to walk home.

You need to be logged in to comment. Login or Subscribe
sroney
Why don't they start all the WS games at 7PM Eastern? With the length of games being what they are, it still didn't end until 11, and it still is mostly viewable on the west coast. Certainly, they are not delaying the start to be convenient for us Californians.....
Reply to sroney
duncanf
I'd bet the 5pm Pacific or later starts are probably mostly for advertiser's $ake.
Reply to duncanf