Two days after going 1-for-3 with a walk against the likes of Tanner Anderson and Montana DuRapau at Sloan Park in Mesa, Arizona, Kyle Schwarber was the center of attention at Progressive Field in Cleveland. This time, Schwarber went 2-for-4 with two RBIs against the decidedly better opposition of Trevor Bauer and Bryan Shaw.

The gulf in quality between the Surprise Saguaros of the Arizona Fall League and the Cleveland Indians of the American League couldn’t be any wider, but Schwarber made the transition in competition seem as if it were as simple as jumping over a creek instead of a gulf.

The first of Schwarber’s two RBIs came in the top of the third, when he took advantage of Bauer’s struggles during what ultimately turned out to be a short outing for the Cleveland righty. In this at-bat, Bauer missed with a couple of four-seamers and then barely missed with a changeup to fall into a 3-0 hole. The next pitch was another four-seamer, but this one was right down the middle of the plate and instead of letting it hit the catcher’s mitt, Schwarber decided to roll it into center field for Chicago’s second run of the evening.

By the time the fifth inning arrived, the Cubs were up by three, and immediately after Ben Zobrist delivered a triple Schwarber was at-bat again. Shaw gave him four straight cutters, and Schwarber rolled the last one right up the middle of the diamond for a base hit that made it 4-0 Cubs. Just as he was the last man called up for this World Series, Schwarber was the last man to cross home plate for the Cubs on the night, and his run made it 5-0 in a game that eventually ended 5-1.

Once again, it’s important to note that Schwarber was recently playing baseball at the same level that includes some guy named Tim Tebow. It really can’t be said enough how impressive it is that he’s been able to not only return from a serious knee injury far ahead of schedule, but also make significant contributions to his team’s efforts at the pinnacle of the sport.

He’ll probably be relegated to being the world’s most popular pinch-hitter as the series shifts to Chicago–assuming a miracle/short-sighted decision doesn’t occur and he’s medically cleared to play the outfield by then–but it’s pretty hard to imagine anybody having a more interesting week in baseball this season than the one that Kyle Schwarber has had.

Meanwhile on the mound, you probably couldn’t blame Cubs fans for feeling a little nervous during and immediately after the first inning. That was because Jake Arrieta managed to have as adventurous an inning as you could have without giving up a hit. 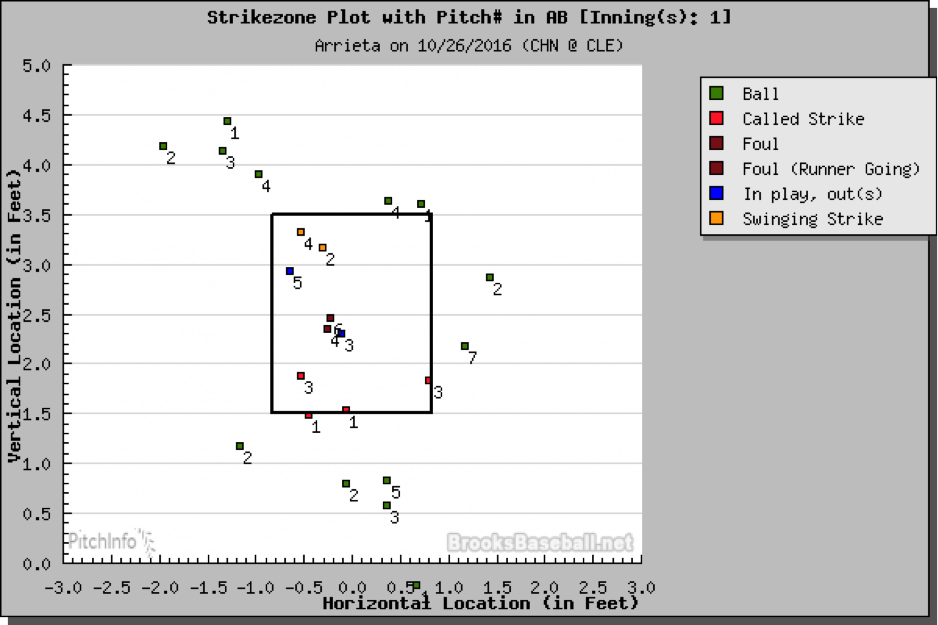 He retired Carlos Santana and Jason Kipnis without much of an issue. Then Francisco Lindor came up to bat and took a free pass to first base after just four pitches. Seven pitches later, Cleveland had two runners aboard thanks to two walks and Arrieta’s command was in major question. Things got even shakier when he fell behind Jose Ramirez 3-1, and the tremors got palpable when Ramirez hit a deep fly to center field. It wasn’t deep enough, and fell harmlessly into Dexter Fowler’s glove to end the frame and preserve a 1-0 lead.

As it turned out, the first inning was an exception rather than a omen. Arrieta proceeded to retire 15 out of the next 16 batters he faced, and it wasn’t until the end of the fifth inning when those familiar "hey, he’s got a no-hitter going" rumblings began to quake again.

Correction: Arrieta’s 5-1/3 no-hit IP were longest to begin World Series game since Jerry Koosman in Game 2 of ’69, per @MLBNetwork. @MLB

If the long first inning hadn’t squashed the delusions of grandeur when it came to Arrieta possibly finishing off the no-no himself, then Kipnis’ double in the sixth inning stomped it out. Kipnis scoring on a wild pitch kind of brought Arrieta’s start full circle. He started it wild, brought things under control in the middle, and then finished wild. Shakiness aside, the mission was accomplished–that was Cleveland’s only run on the night, and the bullpen finished the game 5-1, just as Arrieta had left it.

There’s no empirical data behind the old saying that a series doesn’t really start until a home team loses, and that’s probably why it’s endured the test of time as an old saying. Still, it just feels like we’ve got an interesting series on our hands as the scene moves to Wrigley for Game 3 on Friday. It’ll definitely be intriguing for Terry Francona, who just entered uncharted territory as far as his postseason career is concerned.

For the first time in his career, Terry Francona has lost a World Series game. Welcome to the club.

It only took Francona 10 tries to finally join that particular club. We’ll see if this isn’t an omen for him eventually joining the World Series runners-up club, or if he’ll stay in the posh winner’s circle.

You need to be logged in to comment. Login or Subscribe
JimmyJack
I am so pleasantly flummoxed that Schwarber is swinging his best to win World Series MVP. I was leery of adding him to roster and dead against starting him. I'm so happy to be wrong. I really don't want to see him tackling balls in Left Field this weekend, but at this point, my best bet is to shut up and enjoy this quirk of history.
Reply to JimmyJack
seanqueue
I wonder how long is the list of players with more World Series ABs than regular season ABs in a given season?
Reply to seanqueue