The Cubs and Dodgers kicked off the NLCS last night, and be honest, you thought the Cubs would win. You might be a Dodgers fan, and you might be riding high from Clayton Kershaw in relief, or think Corey Seager has prettier eyes than Kris Bryant. But you read the previews and remembered the Dodgers slashed just .213/.290/.332 in the regular season vs. left-handed pitching, and further remembered Jon Lester on the mound, and got a little sick to your stomach.

You didn’t expect them to win. But you probably didn’t expect them to lose quite like this either. Game 1 was thrilling, then dull, then slow, then suddenly wild. It had a steal of home, a blown save, and a pinch-hit grand slam. And it had ghosts. You probably didn’t see them (they’re ghosts), but they were there (they skipped the fifth and sixth innings because, while Pedro Baez’s relief performance was admirable and important to the Dodgers' chances, even ghosts fear being bored to death).

The Ghost of One’s True Self

I’m about to be a bit unfair. But this catch being tricky for any fielder is the sort of detail that get unfairly forgotten in a loss.

We knew Howie Kendrick was going to start this game because he bats right-handed and the Dodgers needed all the right-handed bats they could muster. What we didn’t know was where he would play. Before the game, we learned that:

Roberts texted Howie Kendrick in the morning and asked him where he wanted to play tonight. Kendrick told him left field. So there is that.

The thing is, despite playing 90 games in left this year, Howie Kendrick is a better second baseman than an outfielder. And because life is a fundamentally unfair exercise, he was reminded of that fact last night, when Kris Bryant sent an 81 mph slider his way, and Howie played it like this. 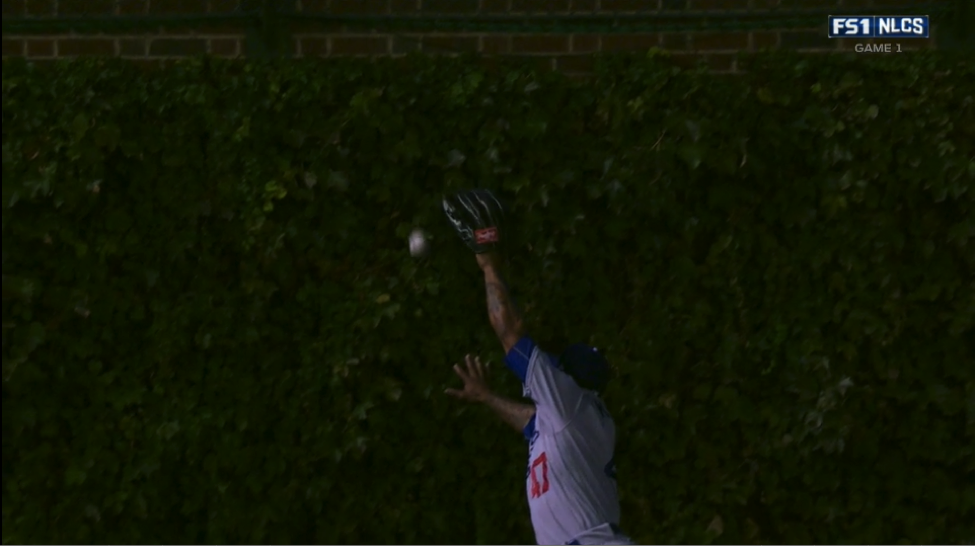 That he had no other miscues, or that one run would ultimately not be the difference in this game, will be forgotten. But that he was given a choice and denied his true self? That might haunt Howie. That, and Joc Pederson coming over from center field to get the throw in, because honestly, are you going to let him get to third?

The Ghost of One’s Youth

Adrian Gonzalez has never been an especially fast baseball player. In a 13-year career, he’s stolen exactly six bases and been caught trying exactly six times. He not a particularly effective baserunner, and you know, that’s fine. He does other things well. In his youth, when I bet he felt young and strong all the time, someone probably told him not to trust his instinct that he was young, strong, and fast, and Adrian, being a good baseball player, decided to listen. So Gonzalez stays in his lane.

Except sometimes we misremember how young and strong we were in our youth, and often at the most inopportune times. We think we can lift boxes into the attic that are too heavy, or play tackle football. We know we shouldn’t actually do these things, and we’re probably able to admit we were never able to do them quite as well as we thought we could at the time, but all it takes is a little push. All we need is a little bit of encouragement and we’re off to the races, making bad choices. We’re haunted by our youth as we think we remember it.

Which is why sometimes, when you’re playing in front of a hostile crowd in Chicago, and your pitching staff is gassed, and you’re already down a run, you misremember your young life. You look at Chris Woodward wind-milling his arm when you’re here and the ball is there: 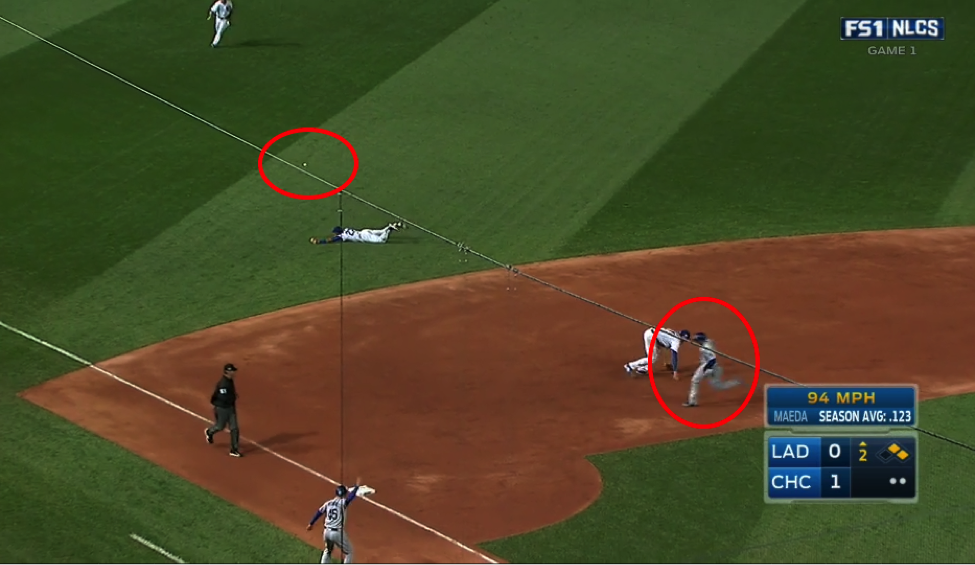 And you think to yourself, “I was probably pretty fast once. This must be a good idea. Let’s see what I have left.” You have your push. The ghost of your younger self hangs over you. The thing is, it really isn’t a good idea. You aren’t fast. You never were. So this happens. 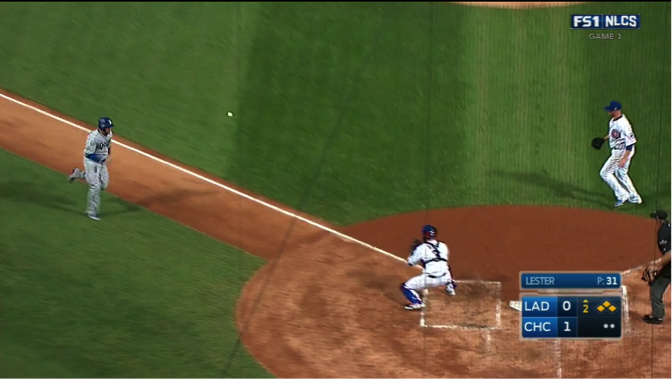 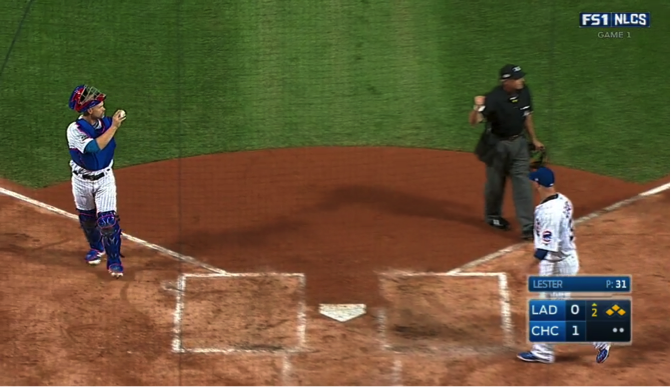 The Ghost of …You Know What, Javier Baez Posses a Different Kind of Magic

After an RBI double, Javier Baez took third on a wild pitch and then did this.

The Ghost of Steve Bartman (He’s fine, he’s not actually a ghost, relax)

[Eighth inning, bases loaded, one out]

Anthony Rizzo: "Guys, I dropped it." 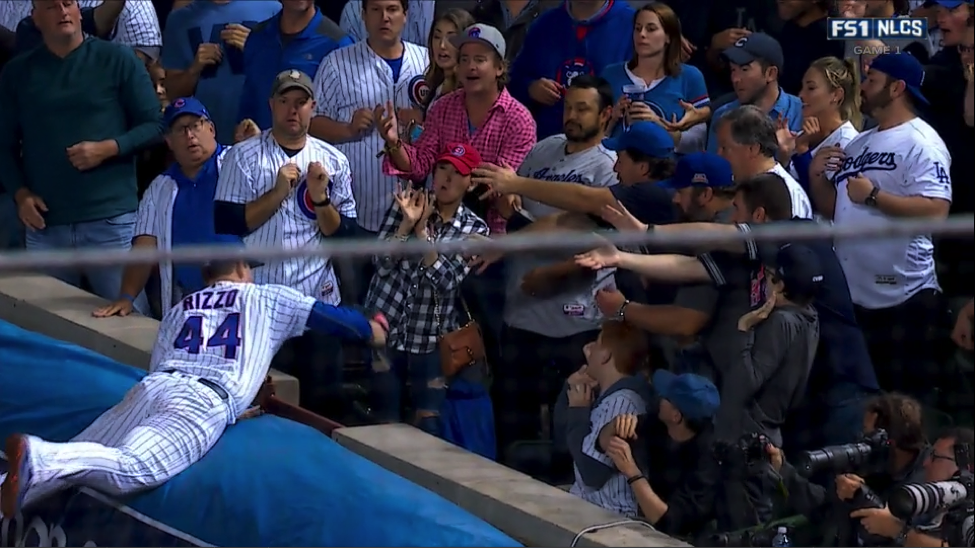 The Ghost of Aroldis Chapman’s Past Indiscretions

Being a neutral fan this time of year can be weirdly liberating. You don’t have to negotiate the thornier parts of your fandom. You don’t owe these guys anything! These guys are not your guys. But it also means you can’t succumb to the moment completely enough to forget who these guys are. You can see their ghosts.

You know that Aroldis Chapman served a suspension for domestic violence, and that the Cubs gave up a whole heap of prospects to get him. You know it pained Cubs fans when he gave up a two-run single to Adrian Gonzalez to tie the game. You know he’s now blown two of his last three save attempts. You know that, but given his particular personal ghosts and your new found liberation, you just can’t bring yourself to care that much.

The Ghost of Innings Pitched in the NLDS, and Walking the Bases Loaded

We have a hard time remembering managerial moves with a questionable process and good results. We do in the moment, but they just as easily fade to “savvy” or “daring” as “asinine.” We watched Kenley Jansen stretched to his absolute limit and Clayton Kershaw coming in to relieve him in Game 5 of the NLDS, but those good results (wins are good) obscure some of Dave Roberts' other tinkering.

If Roberts’ gambit in the eighth had paid off, we might be looking askance at Joe Maddon right now. Jon Lester wasn’t as dominant as we’ve seen him, but he was still plenty good enough and Maddon pulled him after just six innings, 77 pitches, and a solo home run that was assisted by the wind. If Roberts prevails, we might be asking more questions about Maddon’s choices. Except he didn’t, so we aren’t.

Ben Zobrist doubled to lead off the home eighth. After Addison Russell grounded out, Roberts decided to intentionally walk Jason Heyward to get to Javier Baez. So first off, wut. Baez has a different kind of magic working right now. We covered this. Baez flew out, but still: wut. The ghosts were restless. Which is no doubt why they did what they did after Roberts had Joe Blanton intentionally walk Chris Coghlan to load the bases.

It makes a certain kind of sense. It forced Maddon to either pinch-hit for Chapman, who was next up to bat, or leave the biggest at-bat of the evening to a pitcher. I understand wanting to get Chapman out of the game. But it’s a very narrow sort of sense. And Roberts forgot about his ghosts. He forgot he had left-handed relievers who could have faced Montero (although Willson Contreras loomed, also). He forgot how many pitches Blanton had thrown in the Divisional Round. And even though he didn’t actually forget, because he’s a very sharp guy who knows a lot more than we do, he at least underestimated how vindictive ghosts can be.

Let’s look. These are Blanton’s pitches to Miguel Montero: 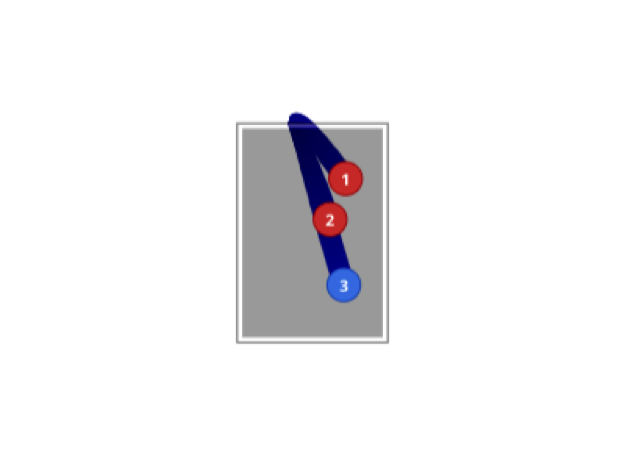 And this is him watching pitch three leave the yard. And there is a ghost watching Blanton watch his pitch. He’s behind the Cubs fan by home plate. Right there. No, there. Right there. 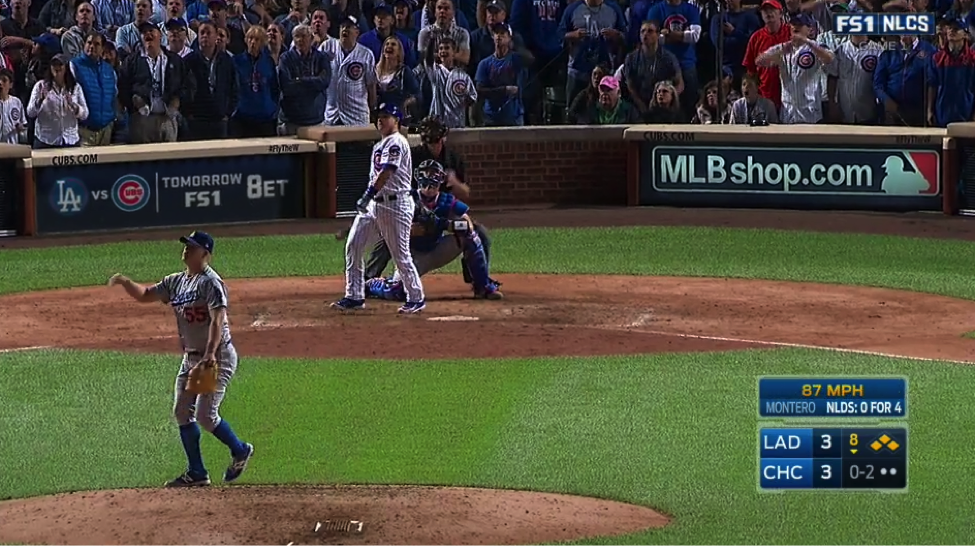 Dexter Fowler would send a solo shot out for good measure, and the Dodgers would never recover. We so often forget the small mistakes until they become big ones, mostly because it’s hard to tell which mistakes really matter, unless they’re not pitching Zach-Britton-level egregious. Which ones are even that big, and which ones are even really the manager’s? They all add up to something, and sometimes that something is bad, and sometimes it doesn’t matter anyway.

If Blanton doesn’t hang that slider, maybe we’re talking about other stuff. But he did. The ghosts got him. They were just a different series’ ghosts.

The postseason is so odd. We take a 162-game slate, after which we have a pretty good idea of who the best team is, and tack on these extra games at the end where a lot of fluky things can happen, and often does so guys can get jewelry. Sometimes bad teams beat good ones, and we’re left to wonder why. But it’s also a time of year when we see some ghosts. Teams carry spirits with them after they cross over the threshold into October. Ghosts of trades and decisions and injuries long past. Ghosts of curses and expectations.

Tonight, Clayton Kershaw faces off against Kyle Hendricks. We’ll see what ghosts they bring with them.

You need to be logged in to comment. Login or Subscribe
robustyoungsoul
Awesome
Reply to robustyoungsoul
trueblue33
Loved this...awesomely written!!
Reply to trueblue33
oldbopper
I enjoyed this piece immensely. First class writing that captured a good deal of the mystical magic that is such a part of baseball.
Reply to oldbopper
oldbopper
Returning to the game, Roberts simply felt better with Blanton who, for some reason far beyond our comprehension level, has returned from the dead. I like the ghost metaphor as well. I was in total agreement that this was a better match-up for the Dodgers than Contreras against Dayton and, as an additional benefit, removed Chapman from the game. It didn't work, that's baseball!
Reply to oldbopper
medler312
Great piece of writing. Perfectly captured that evening at the old park. The old park that I've visited for years from my season ticket perch in section 511. The grand slam made the old park shake.