This week on Pitch: the Padres host the 2016 All-Star game. Will an injured Mike Lawson play? Will Blip make it? Will a grassroots campaign to get Ginny added to the team work? Will Corey Seager start over Addison Russell? Meanwhile, Oscar travels overseas to try to sign top young Cuban prospect Yoan Moncada Livan Duarte, and Ginny’s mom comes to town.

Meg: Mike Lawson is a secret stat-head! Look, I don’t want to make these reviews too personal, because honestly, who really cares about what stuff I like? I’m a person with interests, and many of those interests can be described as “baseball” or “baseball adjacent,” but that isn’t especially noteworthy around here. But it seems obvious that I was the market research for this character. Catcher? Check. Good beard? Check. Guy who will cite stats at the desk when singing Kris Bryant’s praises? Check. He’s the Platonic Ideal of a catcher, a person, a humanitarian. The only thing that could undermine this narrative is a storyline in later episodes about how he’s not a good framer.

Jarrett: I knew immediately when watching that Mike Lawson: Sabermetrics Expert was going to open this review. It does make a certain sort of sense—he’s an intelligent, veteran catcher, and it’s also 2016, so we really can’t expect players to be totally oblivious to advanced stats. But it’s still a little bit jarring to hear a main character on a network television show rattling off wRC+ and wOBA. Well, at least not as parody.

Hitting on the key baseball plot of this episode, a lot of our focus in episodes two through four has been on Mike Lawson’s future. That laid the groundwork for what sure looks like a big plot moving forward for the show: the Padres and Yankees find out that superstar Cuban free agent Livan Duarte is slightly older than previously thought, and not subject to the international free agent bonus pools. The Padres make the second-place financial offer—we lose some realism here given how crazy the Padres actually went on the international signing scene this year, but I digress—yet sign him anyway after Oscar gives Duarte an impassioned plea about the support the organization, Oscar, and Al Luongo can give him. And more relevant to our show, Oscar certainly implies that Mike Lawson won’t be a roadblock to Duarte reaching the majors at his natural position, catcher.

Meg: He’s at a realistic point in his career. He can see the end coming (what of that move to first base?) and now has to start planning for “Phase 2.” (Phase 1 involved being a Hall of Fame player, and Phase 3 involves decamping to Europe to play horseshoes. Oh Mike, you scamp.) Except he might be really bad at Phase 2! Broadcasting is tricky business, or at least a different business from catching, and Mike learns that the hard way. His dry run is terrible. He’s told by C.J. Nitkowski that people don’t expect ex-players to rattle off stats (oh buddy).

I’ve been thinking about this a lot lately with David Ortiz’s retirement. You go from being this vital, young guy, essential to your team, and then suddenly, you aren’t. Suddenly, you’re near retirement, staring down the prospect of waking up every day without a ballpark to go to. Suddenly, you’re hearing live on national television that your GM has signed a young phenom, and that shadowy, nondescript young guy coming for your job isn’t shadowy anymore.

Jarrett: I like the idea that this universe has a Yoan Moncada, and of course he ends up on the Padres behind Mike. I was originally going to say that the age thing felt a bit too stereotypical with the Cuban player fake-age stuff, but I remembered that this plot is vaguely based on Aledmys Diaz presenting several different ages to get aged out of the bonus pools. So, like most of this show, it’s actually quite realistic in the details.

Meg: The whole episode scored pretty high on that score. And maybe more than any since the pilot underscored how big a difference it makes to have the cooperation and participation of Major League Baseball. It’s the “All-Star game” and hey look, there’s the 2016 All-Star game! You know because it was in San Diego, the broadcast crew was bemoaning Corey Seager not starting at shortstop for the NL, and Kyle Seager was tragically absent. So true to life. The banter between Ginny and Mike as she watches the Home Run Derby was terrific. “Don’t pitch to him,” Mike tells her, referring to Mark Trumbo. Pitch around Mark Trumbo; 2016 was wild. As I was watching, I wondered how the showrunners went about deciding when Ginny would pitch and in place of whom. So what were the options?

Here’s all the scoring the American League did in the 2016 All-Star game: 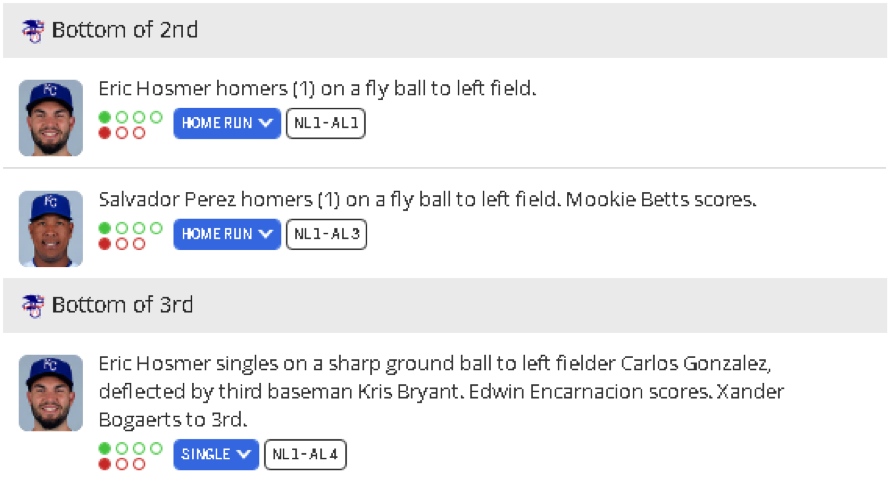 That’s not very many runs! Why didn’t you try harder in service of more realistic plot lines, American League hitters? Lazy. The showrunners clearly wanted Ginny’s All-Star story to be one of adversity; she’s is in the game because of an internet campaign. She doesn’t feel like she necessarily belongs, and as a fifth starter, she really doesn’t. Her troubled relationship with her mom is weighing on her; she doesn’t get to pitch to her favorite catcher. (That we were denied a Buster Posey/Ginny Baker mound visit is the episode’s greatest flaw. Give the people what they want.)

She needs to fail for the whole thing to hang together. You can’t have her start. Ideally, you want to see her late in the game, but reality didn’t allow for it. You can’t have the run that scores be a result of Kris Bryant’s deflection because then it feels like a collective failure. So it has to be a home run; it has to be Ginny’s fault. That leaves us with a solo shot from Eric Hosmer, or a two-run jack from Salvador Perez.

They picked Perez, with the broadcast noting that, as the game’s leading vote getter, he might bear some grudge because the internet demanded Ginny’s participation? Do … do AL players really care who gets tapped to pitch for the NL? Isn’t the conversation just “oh, it’s not Kershaw. And the weather is nice here! Cool.” I found this to be deeply silly; if anyone can appreciate questionable All-Star selections because of the internet, it’s a Kansas City Royal.

Jarrett: Doesn’t Robbie Cano still get booed in Kansas City for that whole Billy Butler Home Run Derby thing? When this episode revealed itself as the All-Star game episode, it immediately struck me that Ginny would have to be an All-Star because it’d be ridiculous for her not to be given who she is. And we continue with the theme that, while Ginny is succeeding some, she’s not Fernando Valenzuela in 1981 here either. Which is good, because it’s so easy for the show to go down that path, but the realistic struggle of her baseball life as a back-end starter with velocity that only beats out Jered Weaver is a more interesting theme.

Meg: 1) Robbie absolutely still gets booed in Kansas City. 2) Fans are so weird. We should probably note that some very real personal drama unfolds in this episode. Ginny has a strained relationship with her mother. I appreciated that the source of their conflict wasn’t her mother failing to understand her as an athlete. Her mom appears to just want Ginny to be able to be a kid (even if she has a pretty gendered idea of what that might mean), but is supportive and willing to intervene on an overbearing father if need be. Ghost Dad seems like he was difficult to live with when he was Not Ghost Dad. Instead, their conflict is Ginny not really understanding some very adult conflicts she witnessed as a kid, and being hurt by them.

We also see Blip and Evelyn navigating a baseball marriage. I won’t pretend I understand how difficult it would be to have a stable partnership amidst an admittedly very strange lifestyle, but this felt very realistic to me. Evelyn wants to be supportive; she also has an emotional life of her own, and isn’t able to be perfectly supportive all the time. Blip understandably wants his wife to be excited for him making his first All-Star game; he also might be guilty of taking Evelyn for granted a bit. This show can be kind of melodramatic at times, but it gets a lot of relationships right, and I really like this one.

Jarrett: This show has done really well at portraying different kinds of relationships, I think. One last related thing I absolutely loved about this episode was the closing scene with Mike and Ginny. Mike had a really lousy day, and he picked up the phone and called his friend to exchange banter and jokes. Television shows don’t usually capture this aspect of friendship well, especially between men and women, and it was just a really cool, natural scene to see.

Meg: Sometimes you just need people who know what you’re going through! Even as a rookie, Ginny is going to get this more than most other people. And Mike is going to get why her All-Star performance bummed her out. They’re great work friends.

Next week: The trade deadline. Are you nervous? We’re nervous.