For eight innings, this was a boring game. It’s playoff baseball, so there’s a pretty high floor in terms of interest level, but if a playoff game can be boring, this was. Maybe Monday night's 13-inning fever dream just set the bar too high, but for whatever reason, not much stood out. John Lackey versus Matt Moore didn’t seem like it was going to be a marquee matchup, and it wasn’t; aside from the occasional moment of Javier Baez brilliance, the innings seemed filled with forgettable moments.

If there was one surprise before the ninth, it was Moore, who allowed only two runs on two hits and two walks over those eight innings, along with 10 strikeouts. Moore was once notable for being an excellent prospect, competing with Mike Trout and Bryce Harper for the top spot in MLB. In recent years, if Moore has been notable, it’s been for once being a top prospect, not for any kind of present-tense ability.

His performance was a surprise, but he did have help. One of the best features of BP’s WARP metrics is that they divide credit for run prevention as accurately as possible between the pitcher and the catcher. That precision is great, but it means it’s not enough to consider just the pitcher when getting a feel for how a game might go. Moore ended 2016 with a mediocre DRA of 4.93, but in Game 4 he was also pitching to Buster Posey, the most valuable framer in MLB in 2016. 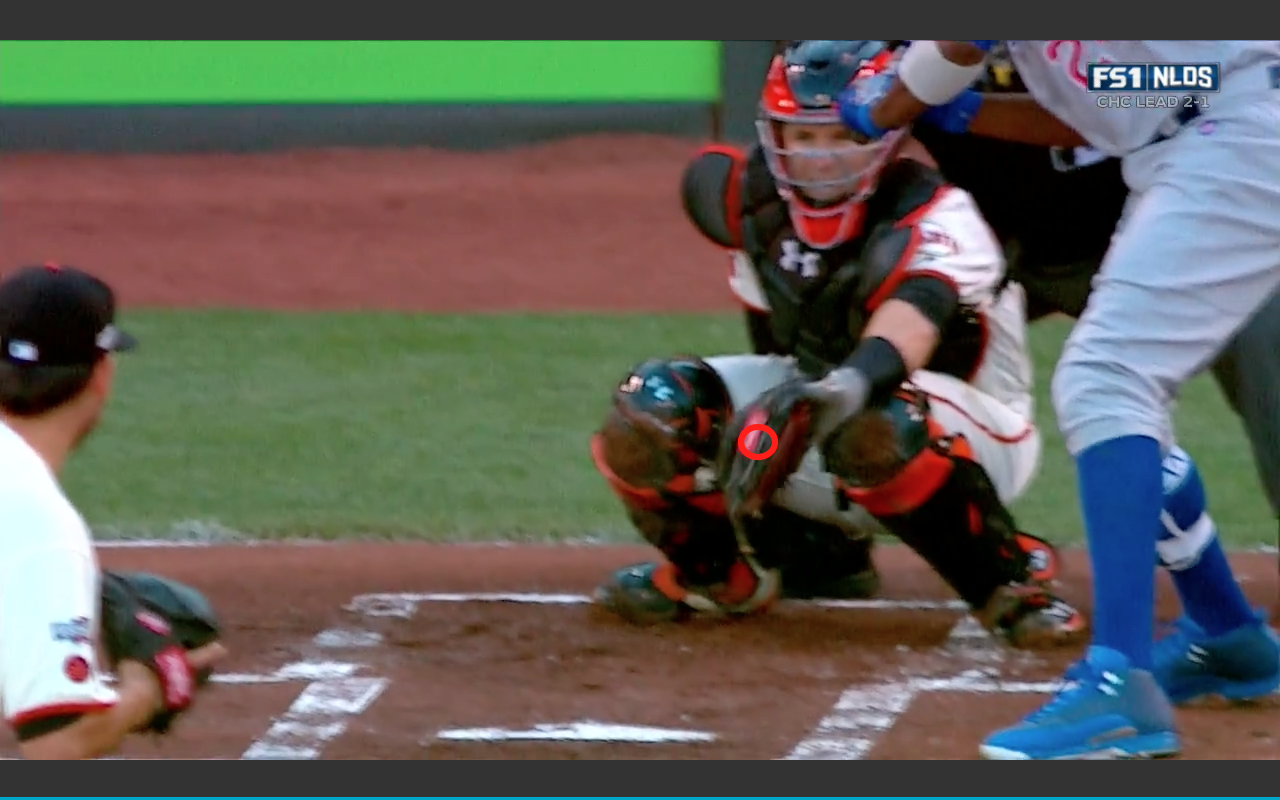 … which could generously be called borderline, frequently were called as strikes. Moore obviously deserves a ton of credit for his surprising night, but so does Posey.

But other than Moore, not much seemed to happen in the first eight innings, and even Moore’s excellence meant that the Cubs’ offense was totally flat. Preeminent old man David Ross hit a solo home run, and the Giants manufactured their lead through some base hits and sacrifice flies. By the sixth inning, the television broadcasters were already talking about the mental preparation Jon Lester was probably doing for Game 5.

Everything came to a head in the ninth, however, when a string of inevitables clashed and resolved. It was inevitable that the Cubs' offense–best in the NL in the regular season, but quiet through most of the NLDS and especially the last 17 innings–would eventually break out. It was inevitable that the Giants' bullpen–never projected to be excellent and wobbly throughout the second half–would run into trouble in relief of Moore. And it was inevitable that, somehow, the Giants would not only close out this game, but find a way to win the next one, too, and both the NLCS and World Series.

None of those were truly inevitable, of course, but they all felt that way, and mostly with good reason. The combination of them meant that watchers of this game had several distinct emotional options to choose from as the ninth began, all very different but supported by evidence. It just so happened that anticipation (Cubs) and dread (Giants) was the correct combination.

In a postseason that has had its fair share of managerial highs and lows, the final inning of this game mostly featured managerial spinning of wheels, which can (and likely will) be described as excellence or idiocy depending on one’s perspective. First, Bruce Bochy replaced Moore with righty Derek Law, who promptly gave up a single to Kris Bryant. Then, to keep the platoon advantage, Bochy brought in lefty Javier Lopez to face Anthony Rizzo, who worked a six-pitch walk. Then Bochy brought in righty Sergio Romo, to face switch-hitter Ben Zobrist on his (slightly) worse side. Zobrist doubled, scoring Bryant.

So far: three pitchers, none of whom faced more than a single batter or recorded an out, after which the Cubs were still down by a run, but with runners on second and third and nobody out. Then, with Romo still on the mound, Joe Maddon sent left-handed batter Chris Coghlan up to hit for right-hander batter Addison Russell. Bochy then sent in another lefty, Will Smith, at which point Maddon sent righty Willson Contreras to hit for Coghlan. The Cubs now had the platoon advantage, but Maddon had to pull Russell and burn Coghlan to do it. That left Tommy La Stella and Miguel Montero, both lefties, as the only remaining pinch-hitters.

And that meant that, with lefty Jason Heyward due up after Contreras, the Cubs were guaranteed to be at a platoon disadvantage for the next batter, and Maddon’s bait-and-switch didn’t actually result in a net increase in platoon advantaged plate appearances. My point is not that either manager’s actions were egregiously bad or incredibly brilliant, but only that four pitchers, five hitters, four plate appearances, and roughly 20 minutes of commercials later, neither manager had clearly outwitted the other. You draw your own conclusions.

It’ll be Bochy who gets called out on sports radio for the next five months, however, since Contreras slapped Smith’s third pitch into center, plating Rizzo and Zobrist to tie the game. While the Giants hadn’t lost after that single, it sure felt like they had. A botched sacrifice bunt by Heyward nonetheless ended up with the Cubs having a runner on second with one out, and Hunter Strickland entered the game as the fifth pitcher of the inning. A Javier Baez single gave the Cubs the lead, and three Aroldis Chapman strikeouts later, Chicago had won and San Francisco had lost.

This series ended up in a weird place, almost fitting both of the prevailing narratives, but not quite either. If the Giants were the fated underdogs, then a dramatic, 13-inning comeback to narrowly dodge elimination would have been a good first step, but it needed to be followed by another two victories. If the Cubs were the brilliantly constructed juggernaut, engineered to cut through the playoffs like a hot knife through butter, two quick wins would have been a good start, but they needed to be followed by a third dominant win capping off a sweep.

Instead, if there’s a narrative this series reinforced, it’s the only true one: that the playoffs are not a story. They don’t have a plot, or a rising action, climax, and denouement. They’re a selection of one, five, and seven games, played under different rules and conditions than the regular season. The best team does not always win; the most deserving team does not always win. Regardless, or as a result, they always manage to be exciting as hell, even when the first eight innings aren’t.

You need to be logged in to comment. Login or Subscribe
gobobbygo
Small correction: "So far: three pitchers, none of whom faced more than a single batter or recorded an out, after which the Cubs were still down by a run..." <-- they were actually still down two at this point.
Reply to gobobbygo
jsherman
Why did Posey/Strickland throw Baez a 0-2 fastball?
Reply to jsherman
medler312
Did you see that 0-2 pitch he hit? 100 mph on the outside/bottom of the corner.

Baez flat out adjusted to the FB. Strickland threw a nearly un-hittable pitch.
Reply to medler312
oldbopper
My conclusion was that Maddon scored a checkmate over Bochy in the chess match in the game's crucial move. Russell had been helpless at the plate all series, Coghlan was sent up to force Bochy's hand and was never going to hit in that situation, so Maddon got exactly what he wanted, Contreras, a solid right handed bat, facing Smith. I believe Bochy would have much preferred Romo against the slumping Russell. Maddon could not have cared less if he had to burn Bryant and Rizzo here to get the match-up he needed.
Reply to oldbopper
medler312
Hell...why did Bochy start with Law for one batter? If the plan was to play the match ups, why is Bochy playing one of his better pitchers in a one AB, low leverage situation?

Joe Sheehan has a great write up in his daily email about this move. The minute Lopez was brought into the game, Maddon owned all the potential platoon match ups to come.
Reply to medler312
blocher
No mention of the fact that the winning run was unearned, a product of Brandon Crawford's throwing error on the attempted double play on Heyward's bunt. If he had stuck it in his pocket, only a man on first and one out, at least two singles needed.

Also, Bryant, Contreras and Baez hits were all within a few feet of being flagged down by Crawford or Panik --- a game of inches.

Cub fan since 1958 and pleasingly startled by last night but still knowing they have a one in four chance for the whole enchilada. (PS who were the five Cubs who hit 20 or more HR in 1958?)
Reply to blocher
medler312
1958. I know one was Ernie. He had over 40 in 58. The only other one I could think of was the one and only Bobby Thompson.

The other 3? I'll have to baseball reference that information. Dale Long was a pretty good Cub in the 50s. Don't know what year, but I know he hit 20+ at least once.

Reply to medler312
Sacramento
Since Will Smith has been much better than Javier Lopez, Smith has good strikeout numbers, and Lopez has walked over 5 batters per 9 innings this year, Bochy erred by using Lopez against Rizzo instead of Smith against Rizzo.
Reply to Sacramento